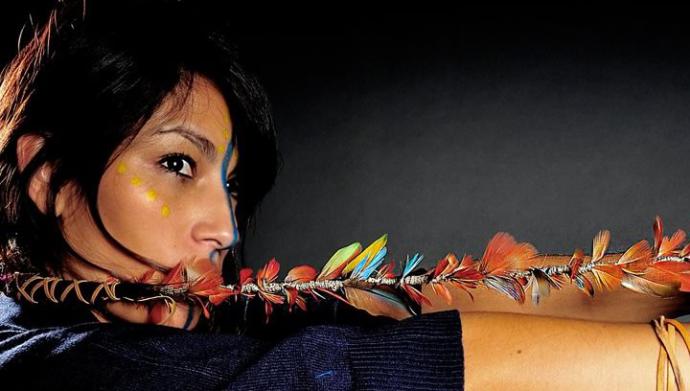 (“I come for answers, with a bundle of full and open veins/ I come as an open book eager to learn the untold story of our ancestors.”)

The first lines of Ana Tijoux’s new album Vengo, which dropped yesterday, set the scene for an album full of introspection. In her third full-length album, the Chilean rapper looks at her life and the world at large in terms of decolonization. But “Vengo” isn’t just the title track, it captures the spirit of the whole album. You hear her vocals dip from conversational and knowing to soft and thoughtful, then rise in an urgent call to action—all delivered in cadence in Tijoux’s signature expert flow.

While Vengo will be filed under hip hop, you’ll also hear folk and jazz throughout the album as she weaves from feminist anthem “Antipatriarca” to the lullabye-like “Emelia,” named for her 1-year-old daughter. (Fun fact: the album is sample-free, each beat and brass blare are recorded in the studio.)

Since her second album Bala dropped, more listeners have recently discovered Tijoux’s music thanks to her song “1977” appearing on Breaking Bad and more recently, Broad City.

Tijoux was kind enough to answer a few questions for Bitch, below. She talks about the difficult and lifelong work of decolonization, what and who to expect on the album, and gives a much-needed reminder that I can’t trust everything I hear from U.S. media. Tijoux just finished up SXSW and is touring—make sure to check out her tour dates below!

The album is about your Indigenous roots, which we can hear especially on the track “Vengo.” Can you talk about how this became the focus of the album?

Vengo comes from the perspective of investigating where we come from, where we are going, and the deep necessity of understanding our vector core identity. It summarizes the album due to its composition and its lyrics.

How does Indigeneity influence the album musically?

That’s a process that I’m trying to understand, reflect, and apply in my life. The cultural looting we’ve been through has been massive, and I’m afraid this journey will last my whole life.

Your music and lyrics have always championed people’s movements. Can you talk about some of the political songs on Vengo? Which movements do you speak to on this album?

An album is a conversation with the world, so it’s normal that when looking into the world we end up talking or writing or singing about topics that affect our countries. I’d rather not talk more about it and let the songs speak for themselves, as I’m one who speaks a lot more clumsily than how I sing.

Tell me about some of your musical collaborators on the album.

You describe yourself as a “mother, musician, and citizen.” Can you talk about how these identities intersect?

I am a mother 24 hours a day, a musician with the rest of the day, and a citizen when I have time to remember it within the madness of motherhood. Time arranges itself within these strange rolls in order to converge one with the other.

You’re currently touring the United States. What do you observe when it comes to US media coverage of South America, or political awareness at all in North America? (I’m thinking of the current violence against protesters in Venezuela.)

I can disagree with some of the bureaucratic processes in Venezuela but I can’t ignore that it is a country that has free education and free health care, which are things that don’t exist in many Latin American countries—Chile included. My country is in extreme debt because of these two things and to compare the two [countries’ student] movements is absolutely absurd. Venezuela is a country with plenty of oil, in other words, a country where money coexists within its veins.

The massive campaign against this country has become a communication war, it is a fervent battle on behalf of economic interests. Mexico has deaths every day, Palestine has daily interventions, and Chile has had tremendous repressions of its Mapuche communities. And you don’t see world campaigns against these actions. So all that shows is the power of the US.

What artists have you been listening recently?

I’d be lying if I told you new artists. I would say that my daughter’s laugh has been what I heard lately in stereo and 3D!

Anita, darling. Please educate yourself when it comes to opression and violence in Venezuela before talking: http://caracaschronicles.com/2014/03/23/all-because-of-a-broken-fingernail/ 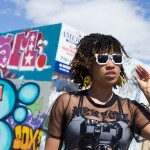