We Were Feminists Once: From Riot Grrrl to CoverGirl®, the Buying and Selling of a Political Movement | Bitch Media

We Were Feminists Once: From Riot Grrrl to CoverGirl®, the Buying and Selling of a Political Movement 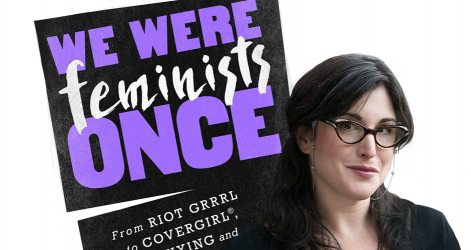 Feminism has hit the big time. Once a dirty word brushed away with a grimace, “feminist” has been rebranded as a shiny label sported by movie and pop stars, fashion designers, and multi-hyphenate powerhouses like Beyoncé. It drives advertising and marketing campaigns for everything from wireless plans to underwear to perfume, presenting what’s long been a movement for social justice as just another consumer choice in a vast market. Individual self-actualization is the goal, shopping more often than not the means, and celebrities the mouthpieces.

But what does it mean when social change becomes a brand identity? Feminism’s splashy arrival at the center of today’s media and pop-culture marketplace, after all, hasn’t offered solutions to the movement’s unfinished business. Planned Parenthood is under sustained attack, women are still paid 77 percent—or less—of the man’s dollar, and vicious attacks on women, both on- and offline, are utterly routine.

Andi Zeisler, cofounder of Bitch Media, draws on more than twenty years’ experience interpreting popular culture in this biting history of how feminism has been co-opted, watered down, and turned into a gyratory media trend. Surveying movies, television, advertising, fashion, and more, Zeisler reveals a media landscape brimming with the language of empowerment, but offering little in the way of transformational change. Witty, fearless, and unflinching, We Were Feminists Once is the story of how we let this happen, and how we can amplify feminism’s real purpose and power.

“With delightfully dry wit, Zeisler carries the discussion of the portrayal of women in advertising, movies, television, and fashion both in the present day and recent history. …This thought-provoking yet sobering consideration of the current state of feminism emphasizes the need to continue to fight for full equality. Highly recommended for readers with an interest in women’s studies, pop culture, and the media.” –Library Journal, Editors’ Spring Pick 2016

“Zeisler’s analysis of what she calls 'marketplace feminism' is acute and endlessly relevant, highlighting the insidiousness of the coopting powers that be, and calling on feminists to direct their resources toward legitimate political action and reclaim feminism as an identity, not something commodifiable.” –Publishers Weekly

“As one of our most passionate and important feminist voices, Andi Zeisler takes on ‘marketplace feminism,’ a feel-good, newly cool and media-friendly phenomenon disengaged from the reality of our ongoing and deeply entrenched forms of gender inequality. Engaging, smart and provocative, We Were Feminists Once challenges us to take on the gap between glitzy media appropriations of feminism and the significant unfinished business of the women’s movement.” –Susan J. Douglas, award-winning author of Where the Girls Are and Enlightened Sexism

Andi is the cofounder of Bitch Media. A longtime freelance writer and illustrator, Andi's work has appeared in numerous periodicals and newspapers, including Ms., Mother Jones, Utne, BUST, the San Francisco Chronicle, the Women's Review of Books, and Hues. She is a former pop-music columnist for the SF Weekly and the East Bay Express, and also contributed to the anthologies Young Wives' Tales, Secrets and Confidences: The Complicated Truth About Women's Friendships (both from Seal Press), and Howl: A Collection of the Best Contemporary Dog Wit (Crown). She is the coeditor of BitchFest: 10 Years of Cultural Criticism from the Pages of Bitch Magazine, and the author of Feminism and Pop Culture (Seal Press). Her new book about the consumer co-optation of feminism, We Were Feminists Once, will be out in May 2016 from PublicAffairs. She speaks frequently on the subject of feminism, media, and pop culture at various colleges and universities.

Andi graduated from The Colorado College in 1994 with a B.A. in Fine Art that has proved to be more or less useless, though she did use it to secure a job designing rugs for Pottery Barn back in the day. She passes her non-Bitch hours watching television, hanging out with her basketball-obsessed family, embroidering portraits of dogs, and subscribing to whatever magazines are left on Earth. Her other interests include drawing, snacking, hiking, traveling, and eating cheese.