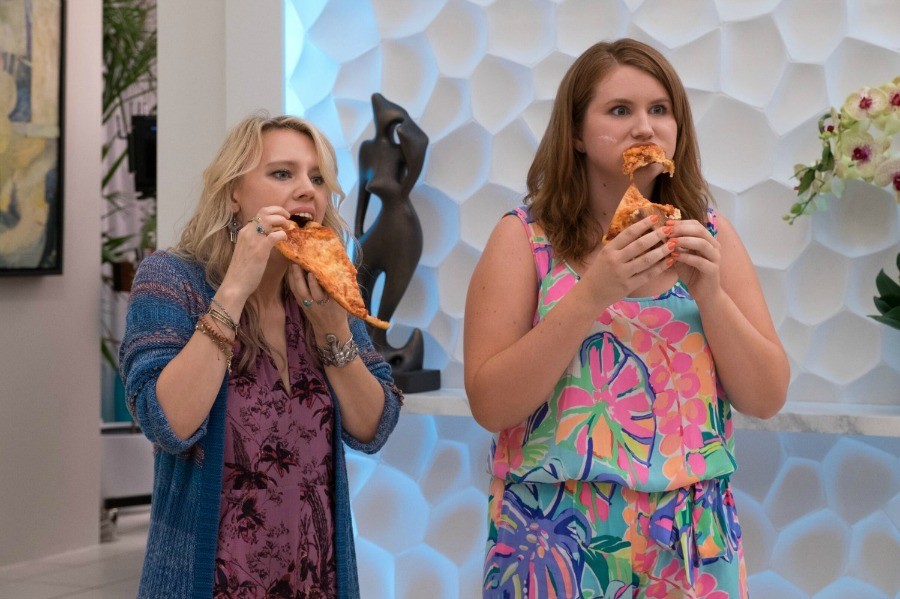 I went to see Rough Night to escape news stories that make me want to crawl under the covers and stay there forever. Dazzled by the lineup, including comedic wunderkinds Kate McKinnon and Ilana Glazer, I assumed there would be some crudeness, vulgarity, and racy humor, but I left the movie feeling demoralized and deeply angry. There are many things to critique in Rough Night—including its ineffective translation of tropes from movies about men, such as The Hangover, and its heinous disregard for sex workers. But one cinematic choice I couldn’t shake was the reductive and demeaning depiction of the fat friend.

I recognized Alice (Jillian Bell), Jess’s (Scarlett Johansson) best friend, the second I met her. Not only is she the fat friend, but she’s the too clingy and too much friend who has extensive dating challenges and is desperate for love and belonging. Alice’s possessive neediness makes her immediately unlikable: She pressures Jess, a candidate for public office, to do cocaine (“It would mean so much to me”); she shames and excludes Jess’s new friend Pippa (Kate McKinnon) by making snide comments and constantly reiterating her importance in Jess’s life; and she is the butt of a running joke about using her feet to get men off because she’s viewed as a sexual object. 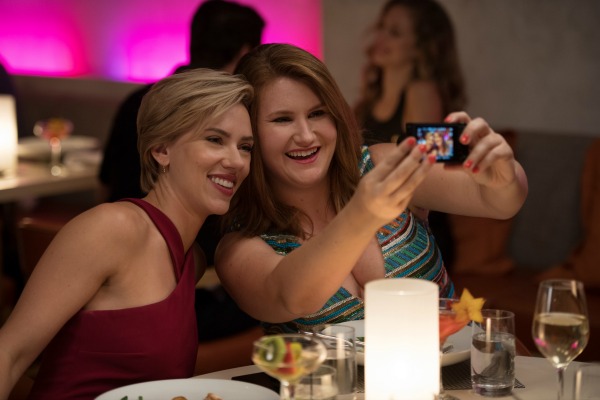 Alice isn’t alone: The “too much” fat sidekick takes up a lot of space in our cinematic landscape. These TV and movie characters’ actions, motivations, and personalities are completely built around the size of their bodies: Take Megan (Melissa McCarthy) in Bridesmaids for instance. She is bizarre, confident, and aggressive in a humorous way that shows how too much she is. After the film’s credits, Megan is seen in a home video depicting a romantic tryst with Air Marshall Jon (Ben Falcone, McCarthy’s real-life husband) in which she feeds him a giant hoagie. Even in her bedroom—the site of her desire and fantasies—food, and gluttony around food, is the focus. While Bridesmaids showed McCarthy’s comedic genius, she had to lose weight before being awarded roles, such as Abby Yates in Ghostbusters, that don’t revolve around her large body.

Many actresses even don fat suits to perpetuate myths about fat people. On Friends, Monica’s (Courteney Cox) neuroses are cute and endearing, but when she transforms into “fat Monica,” she dances awkwardly, talks obsessively about eating, and loses her sexual agency. “Fat Monica” is naive about sex, calls her virginity her “flower,” and loses her ability to fully inhabit her sexuality as she does when she’s thin. In Shallow Hal, Rosemary (Gwyneth Paltrow) is merely a vessel to move the protagonist Hal (Jack Black) past his mind-numbing misogyny and shallowness. Paltrow’s fat-suited body is a source of shame throughout the film—there’s even a running joke about her constantly breaking chairs. It baffles Hal because he has been hypnotized to see her as thin and conventionally-attractive—who she is “on the inside.” When Hal realizes he wants to be with her despite her size, her body becomes a source of liberation for him, rather than something she loves and takes pride in. 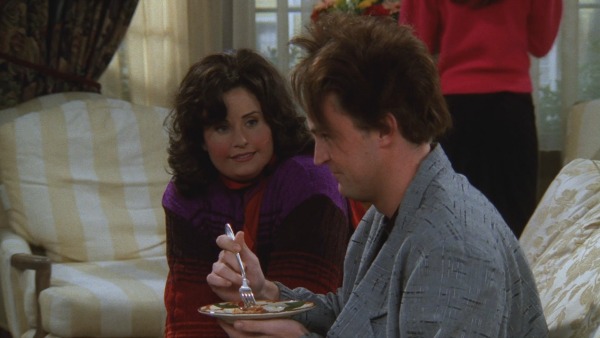 In Rough Night, these stereotypes are taken to the extreme. In the film’s defining linchpin moment, Alice literally kills a stripper with her body when she catapults herself onto his lap, causing him to fall backward and hit his head on the edge of a table. Every cinematic decision that follows tries to reckon with the catastrophe caused by Alice’s bodily desire. One of the film’s promo posters shows Bell’s face in a state of shock with the words “Jillian Bell is” and below, on her bloody bridesmaid’s sash, “Lethally Horny.” In Rough Night and so many other movies, fat people’s sexuality is considered a site of horror—whether it’s the “unsightliness” of their bodies or the damage their bodies can cause.

Their personalities are also considered harmful: Jess doesn’t invite Alice to her bridal shower because she thinks her friend will monopolize her time, and is reluctant to attend the bachelorette weekend Alice has planned for her. Jess even tells Alice that she has made the party about her, but their fight is resolved when Jess reads a card that explains why Alice is so grateful that she—a beautiful, thin, blonde, successful, conventionally-attractive woman—became her friend in college. Jess’s savior-like forgiveness is the only redemption Alice receives, and it comes from a place of pity: Jess believes she should love Alice because nobody else does.

Rough Night isn’t merely entertainment: It’s a cultural artifact that reveals how we perceive and feel about fat people. When people with larger bodies are depicted as dangerous, desperate, needy, and attention-seeking, we all internalize these messages. Showrunner Shonda Rhimes recently wrote in her newsletter about being treated differently after losing 150 pounds. “After I lost weight, I discovered that people found me valuable. Worthy of conversation. A person one could look at. A person one could compliment. A person one could admire,” she wrote. “You heard me. I discovered that NOW people saw me as a PERSON. What the hell did they see me as before? How invisible was I to them then?” 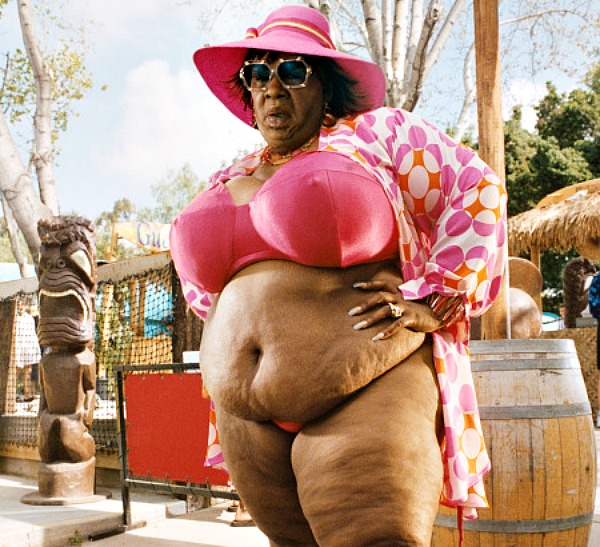 We know that weight stigma leads to job discrimination, dictates who we want to be befriend or pursue romantically, and influences our perception of competence and intelligence. For those of us who are plus-size, bias impacts how we feel about ourselves. And if we can’t have white cisgender able-bodied women in these leading roles, there is no room for trans women, for women of color, for disabled women, or women who have any combination of these identities. It’s worth noting that Bell, who plays Alice, is only fat by Hollywood standards. When bigger-than-plus-size women are included in films, including Bonnie (Darlene Cates) in Who’s Eating Gilbert Grape and Precious (Gabourey Sidibe) in the self-titled film, their bodies are often seen as a site of tragedy.

Every now and then, there’s a fat character, such as Albert (Kevin James) in Hitch, who gets their own storyline, but most of those characters are men. There is less cultural stigma for larger men, especially those who are considered successful. When large women on screen almost never get the opportunity for the big job, big adventure, or big romance, we very clearly get the message about who is and who isn’t allowed to lead big and brilliant lives. There’s no easy fix for solving fat stereotyping in film, but creating more plus-size women protagonists whose lives don’t revolve around their weight is a good first step. At the very least, fat women deserve more than having their bodies used as weapons or the brunt of cruel and lazy jokes. At best, we need to work towards better representation of women in larger bodies living the full and vibrant lives we already lead in real life. 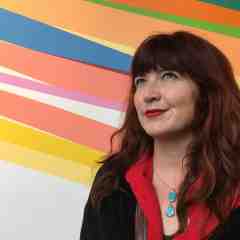 Lisa M. O’Neill is a writer, teacher, and creative usher. She writes at the intersection of social justice, pop culture, and politics. Born in the swamps and living in the desert, she is a regular contributor to Edible Baja Arizona and her writing has also been published in Diagram, defunct, drunken boat, GOOD, Good Housekeeping, Bustle, Salon, and The Feminist Wire, among others.

Thanks for this perspective- I did find the characterization of Alice as problematic, but I couldn't piece together why! It is pernicious the way weight stigma winds its way into everything- I really appreciate this. I did want to add Melissa McCarthy's, "Spy" to the canon of movies in which body size is a non-issue- it was refreshing to see a woman of size handling her business without one snarky line in the script!

Thanks for your in-depth look at our culture's prejudice against full sized women and how that prejudice is being reinforced in the mass media. It's a learned instilled perception that causes untold amounts of suffering in so many. The heightened awareness you provide should help in the discovery that wonderful beautiful and talented people come in all shapes and sizes. 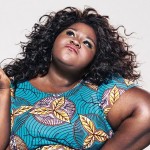