Geez-o, there have been so many excellent albums this year. Sleater-Kinney kicked off the year with the release of No Cities To Love in January and then I feel like I spent all spring listening to Seattle’s boundary-pushing THEESatisfaction. Over the summer, we got excellent garage surf-rock albums from the likes of Shannon and the Clams and La Luz. This fall, CHVRCHES made a major splash with their long-awaited second album. Then, just a few weeks ago, I found out about singer-songwriter Ashni, whose debut EP made its way onto our podcast episode about first generation families.

So here are my 15 favorite new songs from 2015. Frazey Ford’s “Done” is kind of a cheat because it’s off her 2014 album Indian Ocean, but her amazing video for the song debuted in March and is so wonderful that I had to include it.

What were your favorite new songs this year? Feel free to let me know in the comments.

15 Favorite Songs from 2015 from BitchTapes on 8tracks Radio.

Point of Being Right - Shannon and the Clams

I Thought the Future Would Be Cooler - YACHT

I love all these songs and especially you disappear-La Luz. I loved it. 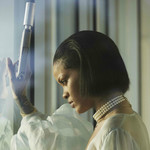