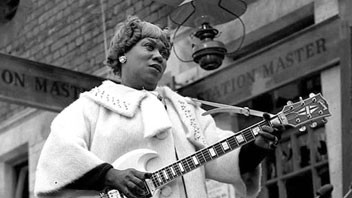 Last month the 2017 class of inductees into the Rock and Roll Hall of Fame was announced. For those who follow these announcements each year, the list looks familiar. Not only because the artists listed are legends of American music. (Are they? Depends how you feel about Journey and ELO.) No, the list is familiar because it is predicatbly idiotic re: female musicians. There are a few women on the list, but each of them serves more to highlight how blind the RRHF (and board member/Rolling Stone publisher Jann Wenner) continues to be in regards to women’s have contributions to the history of American rock. Janet Jackson made the list this year – she was nominated last year, but apparently having a #1 record for four decades straight doesn’t guarantee you a spot on the final list. Chaka Khan and Joan Baez are also in the class of 2017, when they each could and should have been inducted ten years ago or more. (For comparison’s sake, Bob Dylan, who started releasing music after Baez had already put out a debut and was being touted by critics as the “Queen of Folk,” was inducted in 1988. This was Baez’s first year even to be nominated.)

So I decided to do the Rock and Roll Hall of Fame a favor. I set out to make a list of women that can be inducted with the very next class. I assumed that most of the women I could think of had been included, and this would turn into a scavenger hunt for underground legends, yet to be discovered by vast swatches of the public.

I’m sorry to say this has since turned into the easiest assignment I’ve ever had. Because no, most of the women I could think of, or you could think of, or anyone who has listened to more than two minutes of rock & roll since 1955 could think of, have NOT, in fact, been inducted into the Rock and Roll Hall of Fame. Of 310 artists listed on the Museum’s website, which includes performers, “Sidemen” (band members), “Early Influences,” “Lifetime Achievement,” and “non-performers” (engineers, producers, etc), 42 were bands or acts that included at least one woman. Of those 42, only 26 were all-female bands, or solo female artists. That’s about 8% of the total number of inductees between 1986-2016.

Armed with that infuriating knowledge, I whipped up a quick list of women whose influence on contemporary rock is indelible, and who will meet the RRHF’s criterion of having their first album released 25 years ago or more in 2016 or 2017. I’m dedicating this list specifically to Wenner, who once said “All the obvious people have been inducted.” That’s not true by a mile, but it’s no surprise coming from a dude whose magazine routinely publishes massive wank-fests celebrating male guitarists and songwriters and just as routinely leaves off the contributions of women and people of color. Turns out “obvious” picks are less obvious and more massively vulnerable to the casually sexist whims of an increasingly irrelevant dadrock publisher.

Known as the “Godmother of Rock and Roll,” this gospel star with the mean guitar solos was routinely cited as an influence by such musical luminaries as Little Richard, Tina Turner, Elvis, and Johnny Cash.

Anyone who can play two pianos and sing at the same time is the definition of rock and roll.

If the trickle-down effect of Tracy Chapman’s career has reached all the way to Justin Bieber, we can pretty safely say she has made an impact.

5. The Bands That Made Us Realize We Were Gay

Just because she was approximately two millennia before her time doesn’t mean Grace Jones isn’t Rock and Roll Hall of Fame Material. Where’s your foresight, Cleveland?

Without BK there would be no Heavens to Betsy, no Sleater Kinney, no Le Tigre, no Julie Ruin. No riot grrrl, no Kurt Cobain as we knew him, no Nirvana, no Courtney Love. Even the Beastie Boys would sound different.How’s that for impact on rock music?

It would be a pretty enormous move for the same music industry that blacklisted her because of her Red Power activism to induct her into its Hall of Fame, but a girl can hope.

Harvey is the only artist to have received the Mercury prize twice, and has been nominated two times beyond that. You can have these ideas for free, Rock and Roll Hall of Fame. Be better.

Nice list, but I would go with more mainstream female acts deservinv of induction such as Annie Lenox,
Pat Benatar, Sheila E., Sheryl Crow
and The Runaways.