“Buffy the Vampire Slayer” Taught the Value of Female Aggression 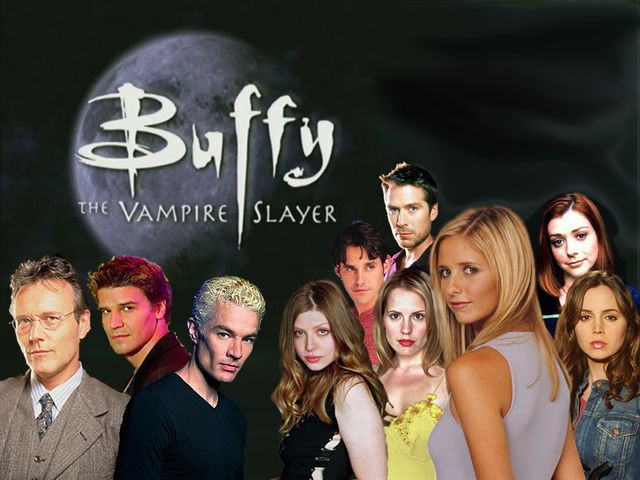 In honor of the 20th anniversary of Buffy the Vampire Slayer, Bitch is featuring three writers offering their perspective on how Buffy impacted their feminism and perspectives.  It’s our tribute to the show that taught a generation to slay the monsters, embrace their dark complexities, and find their superhero strength.

The first time I ever questioned what a relationship with a man could look like was when I saw Buffy (Sarah Michelle Gellar) and Spike’s (James Marsters) relationship on Buffy the Vampire Slayer. Up until that point, I worked to make myself as small as possible so that the men I was in relationship with (work or personal) weren’t intimidated and couldn’t dismiss me with the snarl, “You’re a bitch.” After five years working at a nontraditional woman’s job as a restaurant grill cook, I quickly learned that my aggressive personality was threatening to men who were fighting for the same position I was in, and being labeled a bitch by men co-workers meant they helped each other out while I was left to drown under various cooking responsibilities. I made myself smaller to survive, but it left me wondering if survival was worth it.

Then there was Buffy and Spike. Buffy was a tough athletic woman who also had a very nontraditional job, except her job was slaying vampires. Spike was the prototypical bad boy in vampire form, starting off as Buffy’s enemy and gradually becoming a love interest. While they never became an official couple, Buffy and Spike’s relationship challenged traditional knight in shining armor narratives where men swoop in to save women. What was even better, Buffy showed me that aggressiveness is an important part of a woman’s personality, something she could not be whole without. The Buffy/Spike relationship started in a fairly traditional way—Buffy and Spike didn’t get along and tried to kill each other repeatedly before they figured out the other could prove useful. Buffy could protect Spike after a chip was implanted in his brain that prevented him from being able to fully defend himself, but Spike also knew about Evil Beings that neither Buffy nor her friends were aware of and offered protection to them in return.

In the first episodes of Season 6, Buffy is resurrected from the dead, but when she returns, she is depressed, not really sure that she wanted to live again. Buffy was not a character used to dealing with insecurity or her own darkness and she is left isolated in this depression. Enter Spike. Because he embraces his dark side, he sees that Buffy is different and reaches out to her, eventually declaring his love to her. But Buffy remains detached. It leads up to one night when Spike confronts Buffy and informs her that he can hurt her despite his chip. The two of them fight, it starts with slapping and then progresses into punching and body throwing. They wind up in an abandoned house where they continue to fight, Spike taunting Buffy, Buffy beating him back. And then the moment comes. Buffy kisses Spike and the sex starts. No, the fucking. Because what takes place between them is consensual, but also violent and aggressive. They are so rough with each other that they fall through the floor into the basement, where they continue on, never losing a beat.

While many may be shocked at the violence of this scene and wonder how it could possibly be liberating, when I saw it, I saw myself. A woman who had spent all her life trying to be what others wanted of her: happy, normal, with a smile firmly in place, all while chewing down the the anger and depression. I saw a woman who constantly snipped and cut herself into smaller more manageable pieces finally refuse to snip or cut herself one more time. I saw a woman not caring whether the man she was with thought she was a bitch. Buffy let herself be fully human with no fear: messy, complicated, glorious. And what made it even better was that the man she could finally be fully human with wasn’t intimidated. He found this fully human woman desirable, sexy, and hot.

But, of course, this scene (and the many other “fucking” scenes between Buffy and Spike that came after that initial one) came before the feminist internet, before there was an entire night of Shonda Rhimes women centric shows. So instead of an empowered post-coital Buffy, we get a regretful one. She repeatedly tells Spike she feels ashamed and disgusted with herself for having sex with Spike. In a later episode when Buffy’s best friend, Willow, tells Buffy how free she felt while engaging in her own risky behavior, Buffy responds with a flat, “I get that, but it’s wrong.” And in perhaps the most problematic part of the storyline, their relationship ends after Spike nearly rapes Buffy. These scenes sent a clear message: Buffy was not allowed to enjoy her full, complicated sexual self as a person in recovery from depression. Buffy’s character regressed from being complex and slayer of darkness to a “good girl” that kept herself and her sexuality in check for the benefit of others. She was still a woman, after all, and a woman’s foremost obligation is to be good, not free.

It was a devastating message for me to hear, especially when I was just beginning to challenge my own cutting and snipping, starting to refuse the obligation to make myself smaller so that men would treat me better. But for one brief moment, there was Buffy and Spike in that house. Fucking with wild abandon, fucking as equals. A woman expressed her deepest wildest emotions in a physically aggressive way, and for once, a man found that sexy, desirable, and uncontainably hot. She gave me a taste of abandon, and I’ll always love her for that. In that moment, Buffy was free. And since we were allowed to imagine ourselves as Buffy, so was I.