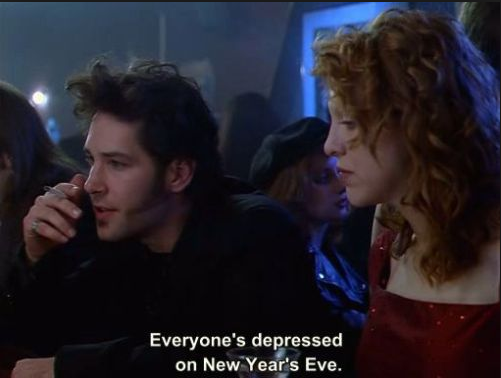 Now that the annual internet arguments about the Best Christmas Movie have been shelved for another 11 months, it’s time to resume the far less heated one about New Year’s movies. It’s so much less heated, in fact, that it’s unclear whether there even is such an argument. For such an overhyped holiday, the category of films generally understood as NYE-related is awfully small, with the undisputed leader When Harry Met Sally carrying the burden of nostalgia year after Harry Connick Jr.–crooning year. The Poseiden Adventure is the Die Hard of New Year’s Eve movies for folks who refuse to be seen liking a holiday movie unironically; An Affair to Remember takes the classic-cinema spot on TMC occupied a week earlier by It’s a Wonderful Life; and New Year’s Eve would occupy Love Actually’s space of Problematic Yet Undeniably Charming if it weren’t a narrative black hole that’s not even memorable enough to be terrible.

So it’s understandable if you’ve never heard of the 1999 ensemble film 200 Cigarettes. It came out at the end of 1999, a time when many people were way too busy juggling Y2K conspiracy theories and buying pet sedatives to pay attention to new releases. It’s cast of scrappy young upstarts inhabited a pre–Us Weekly world. And it had the word “cigarettes” in the title, which I’m guessing made it pretty hard to market given that a critical mass of states were getting serious about smoking bans at the time. But here are five reasons it’s worth watching now.

The cast. Nathan Rabin called 200 Cigarettes “Yearbook Cinema,” and that could not be truer now, when we look back on Hollywood types who we’d maybe prefer to know less about. There’s Pre-Batman/Bennifer Ben Affleck as a dim bartender, and his brother Casey—before he became a sexual harasser, probably, though who knows—as a wannabe punk. Here’s tiny Kate Hudson, not yet needing to shill crappily made gym clothes in order to diversify her brand. And Dave Chappelle, the movie’s unofficial narrator (or, less charitably, its Magical Negro), drives characters around downtown NYC in a disco taxi, blissfully unaware of how many comedy fans he’ll someday disappoint.

The creators. Director Risa Bramon Gracia was a casting director before 200 Cigarettes, which explains why her debut was packed with soon-to-be-stars. (Her first film was the 1985 classic Desperately Seeking Susan, for which she tapped Madonna to play the title role.) The female creative team of Garcia and writer Shanna Larson drove a set of storylines that centered women’s frank sexuality in a way that still isn’t as mainstream as it should be. The sexpot who takes no shit (Courtney Love) isn’t punished for wanting to get properly laid on a night that’s all about questionable decisions. The beleaguered host (Martha Plimpton) of the party everyone’s trying to get to flat-out refuses to stroke her ex-boyfriend’s ego, no matter how insistent he gets. And the best friends (Angela Featherstone and Nicole Ari Parker) who start the night bickering over a dude before eventually realizing that he’s a boring yuppie and that dick is abundant and low value. (It must be noted that despite some enticing hints at other possibilities, 200 Cigarettes is a relentlessly heterosexual film.) 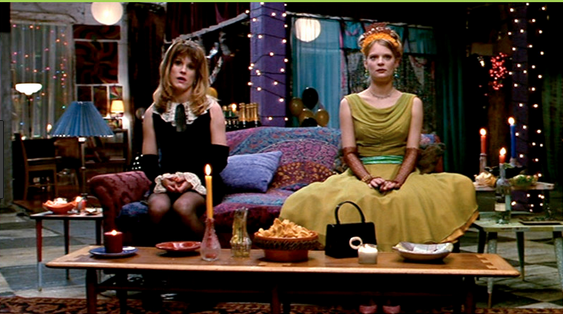 The nuanced (for Hollywood, anyway) feminism. Neurotic, intellectual girlfriends and ex-girlfriends have existed in many a movie written and directed by men—usually as a two-dimensional punch line. In 200 Cigarettes, they just exist. In addition to Plimpton’s character, there’s Janeane Garofalo’s neurotic, intellectual, feminist ex-girlfriend of Paul Rudd’s angry-young-man writer. Her exasperated monologues are great (“I’ve dated enough narcissistically neurotic men to know that you are all just a pack of roving babies in search of a giant teat from which to suck the lifeblood out of me until I am a hollow shell”), but the moments in which she’s relatably vulnerable as she navigates the end of a dysfunctional relationship are equally important. Plus, her NYE comes to an especially scandalous end.

The pre-gentrification, pre-digital setting. Before all of Manhattan became a giant shopping mall, it was a place where it was actually believable that downtown artsy types in vintage party dresses could afford to live in a roomy walk-up in Alphabet City. And before smartphones, getting lost on the way to a party could be both perilous and full of possibility. 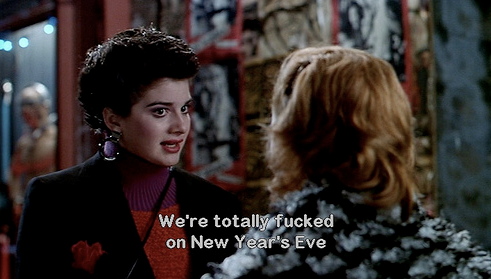 The non-happy endings. There are no neat, moralistic outcomes here: The narcissists and cads remain narcissists and cads. The annoying friends are just as annoying the next day. And the party’s host drinks herself flat onto the floor and misses her own epic New Wave rager. I like to give 200 Cigarettes respect simply because almost ten years before Twitter existed and FOMO acronymed, it spoke the ugly truth: New Year’s Eve is a bullshit holiday that will jack up your expectations, disappoint you every time, and still manage to nurture a fragile hope that next year will be better.

Relevant: Female Film Directors Put Together a List of Must-See Movies Made By Women 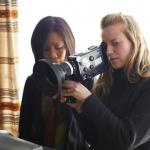 Director Sarah Polley at work on her documentary The Stories We Tell....