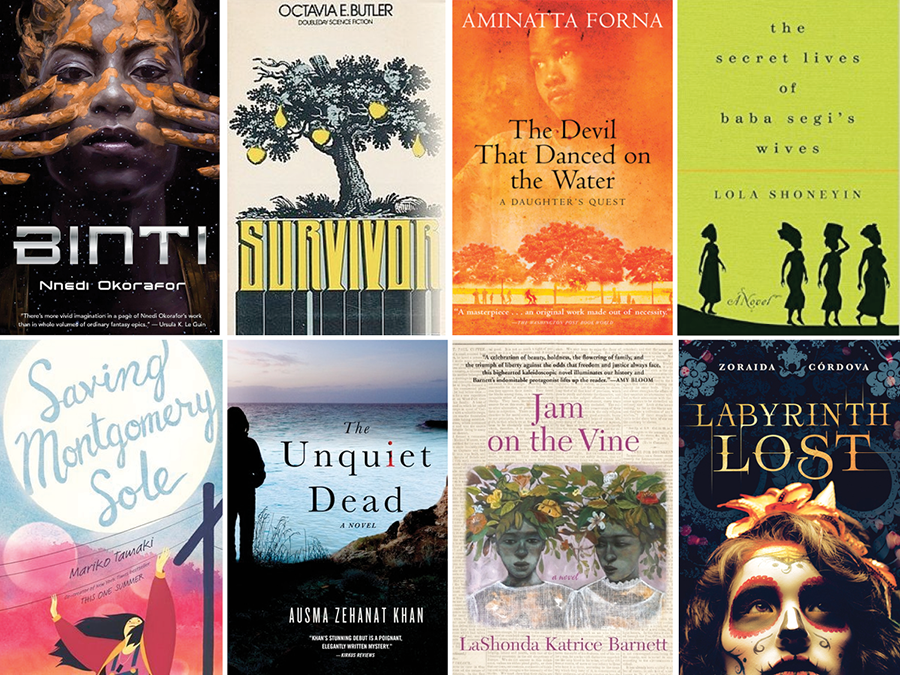 This is the third year in a row that I’ve set myself a goal to read 50 books by people of color and my second making sure that I read 50 books specifically by women of color. I decided on the challenge after hearing speculative fiction writer Nalo Hopkinson discuss how books by people of color tend to be overlooked by publishers and readers alike. If you don’t seek out new voices, it’s easy to fall into reading books primarily, if not solely, by white authors.

This challenge has introduced me to new authors, many of whom I discovered only because I was actively seeking books authored by women of color. This year, reading words by women of color became even more important as both a refuge from hate-filled reality and to affirm that the voices of women of color are a cultural and political necessity.

If you’re looking for books to read or give in 2017, consider checking out some of these 54 titles. And tell me what you’ve read (this year or in previous years) that I should add to next year’s reading list!

Readers who remember my Girls of Color in Dystopia series won’t be surprised that SFF made up a large portion of my year’s leisure reading.

I finally managed to read Octavia Butler’s novel Survivor. Set in Butler’s Patternist world, this is the story of Earth’s Missionaries who flee the Patternists and Clayarks and land on a distant planet with two warring civilizations. Though it’s out of print, you can read it here.

That’s not the only Butler fiction to be resurrected. I just started reading Unexpected Stories, two of her never-before-published stories. One is set in the same world as Survivor. Both are fantastic, which makes me wonder why they’d never before seen the light of day.

This year, I discovered Traci Chee, whose debut novel, The Reader, shows that even in imaginary worlds without race and racial identity, authors can still describe physical attributes so readers don’t read characters as white. Plus, The Reader revolves around the magic of reading!

Chee’s wasn’t the only debut novel I read. Longtime SFF readers (especially SFF readers of color) may already be familiar with Nisi Shawl, but Everfair was the first book of hers I read. She dives into steampunk and alternate histories, though not from the usual perspective. What if British socialists and African American missionaries had transformed part of the Congo into an experimental utopia for Africans, Asians, Europeans, and escaped American slaves? And what if that utopia involved steampunk technology?

In contrast, Silvia Moreno-Garcia examines an alternate Mexico City if vampires, migrating from a hostile Europe, were a constant threat to humans. In Certain Dark Things, lonely street kid Domingo comes across Atl, the last of the Aztec blood drinkers. Now both are trying to escape the rival narco-vampires who slaughtered Atl’s family.

I also love SFF set in cities I know. (If anyone knows of any amazing SFF set in Hong Kong, let me know!) Jayde Brooks’s Daughter of Gods and Shadows and Zoraida Córdova’s Labyrinth Lost begin in New York City before moving into fantastical imaginary worlds.

I’ve never been to Austin, so I can’t say how accurately Cynthia Leitich Smith depicts the city in her Feral trilogy (Feral Nights, Feral Curse, and Feral Pride), but I can say that her books are fun reads. She follows the adventures of teenage werepeople (also known as shapeshifters) of differing races and colors as they are kidnapped, hunted, haunted, and then forced on the run.

I’ve also never been to colonial Malaya (obviously), but Yangsze Choo’s The Ghost Bride is evocative and beautifully written.

Other books in which authors created entirely new worlds in ways that pulled me in by page 10:

Mysteries haven’t appealed to me much since I outgrew Encyclopedia Brown and Nancy Drew, but last year, I discovered Walter Mosley. That got me back in the game.

Imagine a heist novel in which the con (wo)men are high-end escorts robbing their corrupt clientele to keep a women’s health clinic open on the Lower East Side. Piqued your interest? If so, grab yourself a copy of Uptown Thief  by fellow Bitch Media contributor Aya de Leon.

You should not read Ovidia Yu’s Aunty Lee mysteries (Aunty Lee’s Delights, Aunty Lee’s Deadly Specials, and Aunty Lee’s Chilled Revenge) on an empty stomach (or with an empty fridge). After her husband’s death, Aunty Lee opens a restaurant where she serves spicy Singaporean home cooking—and solves grisly murder cases. The mystery is always a page-turner, and Yu’s descriptions of the food out of Aunty Lee’s kitchen had my mouth watering.

Ausma Zehanat Khan’s The Unquiet Dead and The Language of Secrets take place in Canada and follow Detective Khattak, whose Muslim faith continually renders him suspect among his colleagues, no matter how insightful and ingenious his detective work.

Shamini Flint’s Inspector Singh Investigates series (A Most Peculiar Malaysian Murder, A Bali Conspiracy Most Foul, The Singapore School of Villainy, and A Frightfully English Execution) takes the reader to different countries and cultures as she chronicles the traveling detective work of Inspector Singh, a messy, cantankerous inspector who is perpetually frustrating to both his wife and his superiors on the Singapore police force. But, like Aunty Lee, he is also darn good at solving whodunits (though his wife does all the cooking).

I love learning about different time periods and places through historical fiction. After all, I may have occasion to visit Alabama, but never Alabama in the 1960s (like Rita Williams-Garcia’s Gone Crazy in Alabama) or 1970s (like Thanha Lai’s coming-of-age story in verse Inside Out & Back Again).

Guadalupe Garcia McCall’s Shame the Stars is a reimagining of Romeo and Juliet set on the Texas-Mexico border in 1915 as Texas Rangers trample Tejano rights, young Joaquin tries to woo his childhood friend Dulcena despite their fathers’ falling-out.

LaShonda Katrice Barnett’s Jam on the Vine also starts in Texas where Ivoe, the daughter of a Muslim cook and a metalsmith, escapes the grinding poverty of the Jim Crow South first by immersing herself in the printed word and, later, physically when she and her lover Ona settle in Kansas City to run the first female-run African American newspaper.

I love epic novels spanning several generations. Cecily Wong’s Diamond Head spanning three generations starts when industrialist Frank Leong moves his family from China to Hawaii. It moves back and forth between China and Hawaii, from the Boxer Rebellion to Pearl Harbor, as the family struggles to build their lives and bury their pasts.

Kalisha Buckhanon’s Upstate is written as a 10-year correspondence between 17-year-old Antonio, sent to prison in upstate New York, and his 16-year-old girlfriend, Natasha. It’s a coming-of-age story that details the devastation of incarceration.

My friend and fellow reader Natsumi recommended Aminatta Forna. I’m glad she did! In The Memory of Love, Forna weaves a shattering recollection of love and betrayal from Sierra Leone’s civil war to its devastating present-day aftermath. In The Hired Man, she brings the reader to a Croatian village with shallowly buried wartime secrets.

Before picking up this next book, I’d never heard of Burma’s Taungbyone Festival, in which villagers pay nat kadaws (spirit mediums) for good fortune in the coming year. In Nu Nu Yi’s Smile as They Bow, we overhear prayers from the villagers, smell the foods they bring, and see the lavishness of the festival. We also see the fears of Daisy Bond, an aging nat kadaw (in the United States, Daisy might be considered a trans woman), who worries that Min Min, the lover he purchased years ago, has lost interest in him.

Lola Shoneyin’s The Secret Lives of Baba Segi’s Wives is a lighthearted novel revolving around a polygamous family in Nigeria. When his fourth wife fails to conceive after two years, Baba Segi takes her to the hospital, setting into motion an unraveling of family secrets, deceit, and hypocrisy.

These three are set in the United States and, in different ways, examine coming-of-age and family:

I always mean to read more memoirs and biographies, but somehow, when I do my end-of-the-year tally, the number is always smaller than I’d initially anticipated.

Aminatta Forna’s The Devil That Danced on the Water chronicles both her childhood—marked by the jailing and disappearance of her father, Sierra Leone’s former minister of finance—and her return to the country 25 years later to learn what happened to him.

I already reviewed Walidah Imarisha’s Angels with Dirty Faces, so I’ll just say this: If you are thinking about what transformative and healing justice might look like, read this book.

The Memphis Diary of Ida B. Wells shares the intimate thoughts of a young Ida B. Wells before she became a famous civil rights activist and antilynching crusader. Here we see her struggle to be taken seriously as a journalist  and see her struggle with money and with being a young Black woman making her way in 1880s Memphis.

I didn’t know about Callie House or her fight for reparations before I picked  up Mary Frances Berry’s My Face Is Black Is True: Callie House and the Struggle for Ex-Slave Reparations. House was a key organizer in the struggle for reparations, leading the National Ex-Slave Mutual Relief, Bounty and Pension Association, traveling across the country to inspire others to demand their due, and incurring the wrath of the federal government.

Other memoirs and biographies I read by and about women of color this year explore things like undocumented immigration, disability, abuse, power, and activism:

Readers may remember that I’m not particularly big on theory, but I did pick up Simone Browne’s Dark Matters: On the Surveillance of Blackness, which examines how contemporary surveillance is informed by the ways of policing Black life under slavery. There’s so much I didn’t know about methods of policing, and Browne does a great job at drawing connections between the past and the present.

I’m planning to read 50 books by women of color again next year. What should I put on my 2017 to-read list? Tell me below!