There’s No Such Thing as the “Latino Vote” | Bitch Media

There’s No Such Thing as the “Latino Vote” 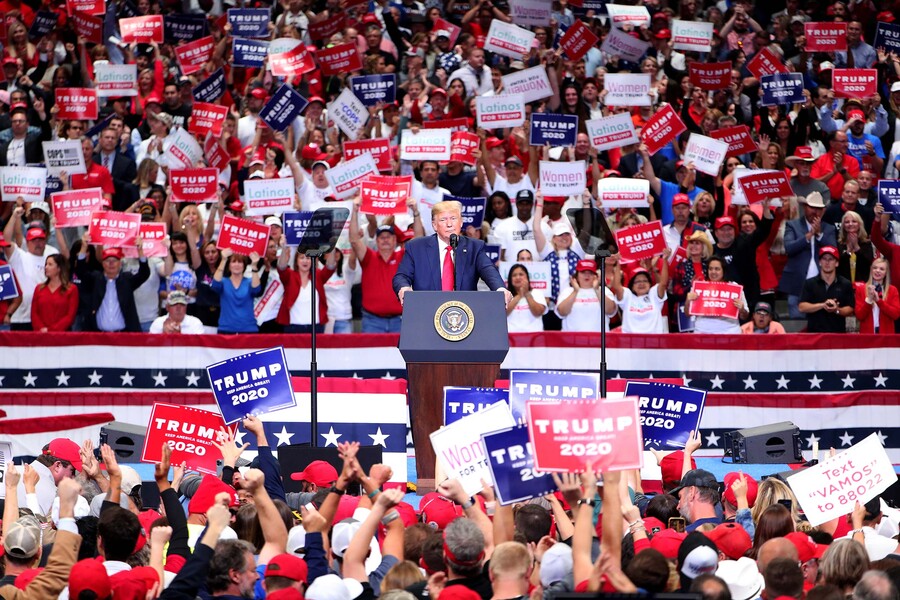 Before Joe Biden was declared president-elect on Saturday, the 2020 U.S. presidential election hinged on just several hundred thousand votes in Georgia, Nevada, Arizona, and Pennsylvania. According to early exit polls, Latinos overwhelmingly voted for Democrat Joe Biden in each of these battleground states. More broadly, Biden won the “Latino vote” in every state. Yet, as Brittny Mejia wrote in the Los Angeles Times, an “angst-ridden question arose among many Democrats: Why didn’t more Latinos vote for Biden and why did so many, relatively speaking, vote for Donald Trump?” For those who know Latinos in real life or who pay attention to Latino journalists—including those who’ve spent the last several months reporting on this phenomenon—the early exit polls are less jarring.

As veteran journalist Julio Ricardo Varela tweeted on November 5, the GOP has historically gotten one-third of Latino voters nationally, and, as Jose A. Del Real and Arelis R. Hernández reported for the Washington Post, Latino communities “have been often taken for granted and misunderstood by the Democratic political establishment.” The irony is not lost on me that as non-Latino members of the American public admonish our community for not voting in the numbers they wanted us to (or for not voting the way they thought we should), white American men and women are once again let off the hook—even as they are squarely responsible for electing Trump in 2016 and a majority of them voted for him in this election. This impulse explains why Los Angeles Times columnist Gustavo Arellano not-so-jokingly wrote, “No matter who ends up winning the presidential election, one thing is already clear: It’s all the fault of Latino voters.”

My own Mexican American family is a microcosm of the blame game that’s playing out nationally. My father is a Mexican immigrant who voted for the first and only time in 1992. As he tells the story, he only voted in the ’90s because he’d just been naturalized; after spending decades undocumented, he was on edge that the government was tracking his movements and he feared that failing to perform his civic duty after adjusting his status would somehow lead to trouble. While I’m a journalist who tells sensitive stories and makes sense of complicated information, I can’t clearly articulate my father’s political ideology. In many ways, he’s conservative: My dad doesn’t attend church, but he identifies as a Catholic, and while he holds a number of views that are deeply harmful to communities I belong to, he also leans left. He taught me not to trust the police and to question authority. He told me that family and community are the only things we can truly rely on. Because of him I understand that knowledge is power; my fondest childhood memories are the countless days we spent together at the library.

My father also taught me not to take shit from anybody and to fight injustice. In other words, my dad is full of contradictions and complicated nuances. He is a messy human being—one who says he would have voted for Biden, but who, for his own reasons, simply chose not to vote at all. As election day approached, my dad and I had many conversations about voting. I urged him to vote and I explained what was at stake, but he was firm in his stance that it wouldn’t change anything. My dad is a 70-year-old janitor who has spent decades in the United States working multiple low-paying jobs and navigating racism and xenophobia. He’s deeply cynical of elected officials and intransigent in his belief that it doesn’t really matter who is in the White House because a new president won’t change the circumstances of his life or the lives of other low-income Mexican American citizens.

My dad lives in Downey, California, a Southeast Los Angeles community that the Los Angeles Times called “Mexican Beverly Hills” in 2015. (I angrily wrote wrote a response to this reporting and cautioned against pretending there is “one Latino experience.”) My dad has achieved some semblance of whatever the American Dream is supposed to be. Though his house is dilapidated and he still owes $95,000 on it, he’s still a homeowner and he raised three children, all American citizens, who were free to pursue their passions. My oldest brother chose to serve in the Army and, upon leaving, he considered joining Border Patrol where he lives in El Paso, Texas, because it is a decent-paying job with benefits. For similar reasons, my other brother spent a short stint as a prison guard, working in Arizona under Maricopa County’s notoriously racist anti-immigrant sheriff, Joe Arpaio. What could be more American than these contradictions?

My brothers didn’t cast a ballot in this election, which was not the problem among my larger Mexican American family. My cousin and uncle, for example, are formerly undocumented immigrants who benefited from the “chain migration” Trump rails against, yet they cast their vote for Trump, disrupting the simplistic Cuban/Catholic Latino Republican narrative journalist Andrea González-Ramírez warned against in a recent article for Gen. While it appears true that Miami Cubans “disrupted Biden’s path to a Florida win,” the GOP’s anti-socialist messaging that may have appealed to Cuban exiles in Florida is not the reason my Mexican family members in California voted for Trump. Rather, Trump’s racism and xenophobia served a purpose in their lives. Like many Latino families, mine is deeply anti-Black; they are racist against African Americans and do not acknowledge AfroLatinos as part of our community. The Spanish language media these family members consumed during the election cycle only reified their racism—as it was intended to, according to reporting from the New York Times that examined how false political news in Spanish pitted Latino and Black voters against one another. “The efforts aim to draw clear distinctions between Black and Latino voters, though Afro-Latinos make up a sizable part of the population,” writers Patricia Mazzei and Jennifer Medina explained.

While trying to deconstruct the “Latino vote” is futile, we owe it to ourselves to demand that journalists and newsrooms do the work it takes to recognize the power and possibility of our communities.

As Mexican Americans, my family also exhibits animus toward other Latinos, especially Salvadorans, lobbing the same anti-immigrant talking points against Salvadoran immigrants that Trump has used against Mexican migrants. As another example, in Downey, where I spent 30 years of my life, tensions have always been high between Mexican Americans and Cuban Americans, the crux of which stems from colorism, socioeconomic class differences, and animosity about the fundamentally different experiences our families had in the U.S. immigration system. As many others have pointed out, the “Latino” umbrella we are all placed under does not capture these wildly different communities of people. As journalist Aura Bogado tweeted, “Latin Americans arriving in the US are ultimately racialized by this country’s caste system. And descendants are racialized through generations.”

These contradictions, nuances, and deep-seated divisions can be difficult to understand, but here’s what we should know: Latinos “flocked to the polls” in numbers that far exceeded what experts expected, according to Rutgers University professor Juan González. Two-thirds of eligible Latinos voted. Youth of color, including Latino youth, played a pivotal role in Biden winning several key battleground states. Undocumented organizers who can’t vote found a role to play in the election, launching an unprecedented digital campaign that mobilized Latino LGBTQ voters in battleground states—and the results in once-Republican strongholds have been stunning. The votes are still being counted, but it appears as if Arizona is shifting blue and it is in large part because of grueling, years-long electoral work performed by Latino organizers who successfully unseated Arpaio in 2016 and are a key reason Trump was ousted in 2020. Latinos are the fastest growing demographic in the United States. While trying to deconstruct the “Latino vote” is futile, we owe it to ourselves to demand that journalists and newsrooms do the work it takes to recognize the power and possibility of our communities.

Read this Next: Weaving the Wall

by Barbara Sostaita
Border artists summon the sacred and repair what has been broken.