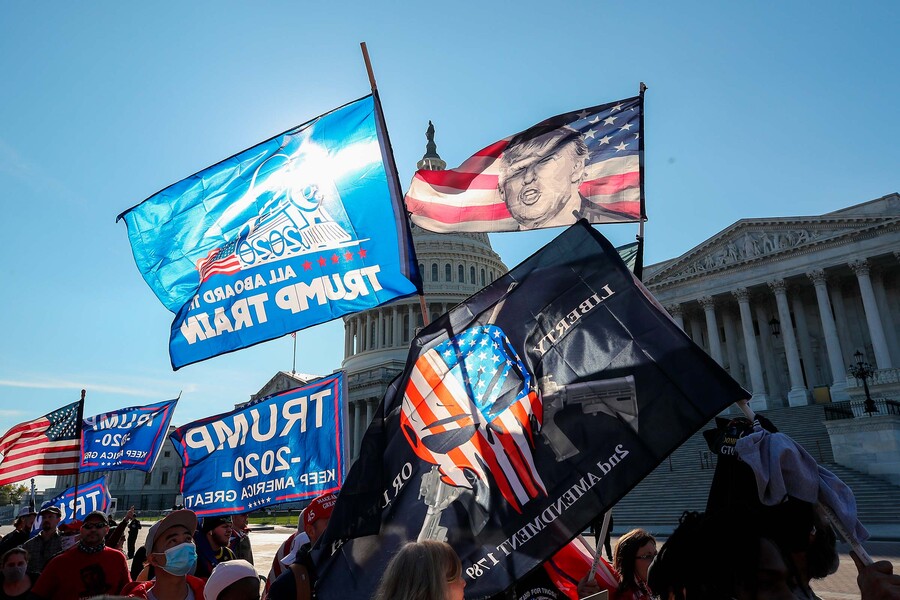 Pro-Trump protesters gathered during the “Million MAGA March” from Freedom Plaza to the US Capitol in Washington, DC, United States on November 14, 2020. Rally held to back President Donald Trump’s unsubstantiated claims of voter fraud in the US election. (Photo credit: Tayfun Coskun/Anadolu Agency via Getty Images)

After a tumultuous election week, Joe Biden is the president-elect. But as ballots were being counted and projections were being made, far-right groups were actively organizing and implementing short- and long-term plans to consolidate and expand a large, permanent, white-population majority in the United States. During the course of this highly contested election, President Donald Trump has incited his supporters to demand that votes not be counted where Biden is leading, and conversely that vote-counting continue where the president is leading. In the last few days, and increasingly in the days following Biden’s celebratory acceptance speech, Trump has been laying the groundwork for a potential contestation of election results and suing key swing states, even as Fox News has continuously questioned the election results without evidence of voter fraud, fanning the flames of antidemocratic sentiment and inciting Trump supporters to harass ballot counters.

In the swing state of Arizona, armed Trump supporters gathered outside the vote-counting center in Phoenix, and the Associated Press has reported on the “increasingly normal” armed protests outside vote-counting centers. Our reality is clear: Organized, violent, white supremacist groups and the broad constellation of structural white supremacy will continue to be a problem in America. In the weeks leading up to the election, experts on far-right extremism noted a marked build-up of activity in violent white supremacist groups that has not yet died down. Kathleen Belew, author of 2019’s Bring the War Home: The White Power Movement and Paramilitary America, warns that the history of white supremacist movements indicates that the next few weeks could be marked by domestic terrorism in response to Trump’s election defeat.. “It’s very likely that by the time this piece runs we won’t know the full reaction, [but] the thing that makes the most sense for me intuitively, knowing the long history of the movement’s work, is that if this is a narrow-enough margin, if Biden wins…these activists will not see it as a fair election and will have ample reason to take action.”

Belew can envision several versions of how this could play out, but experts are concerned about two possibilities: Street protests similar to antilockdown dissent such as that in Michigan, where the Boogaloo movement was identified as being active, or an even more violent mass-casualty approach similar to the 1995 Oklahoma City bombing, which killed 168 people. “My concern is communities where there have already been altercations between the right and the left, and where there’s been a build-up of far-right activity,” Belew said. “So I’m thinking of Portland, Austin, Detroit, Minneapolis, and Philadelphia. Not coincidentally, some of those places are having very tight recount procedures.” Belew also added that after the election, she is worried about infrastructure targets like federal buildings and synagogues, as well as targeted political acts of violence such as assassination.

The long-term goals of a variety of violent far-right groups, from the Proud Boys to white nationalists, go beyond a Trump presidency; Belew suggests that many of these groups have supported a Republican presidency opportunistically as a means to reach their goal of building an Aryan nation. The social-justice think tank Political Research Associates (PRA) has also warned in an election memo about paramilitary far-right groups that the risk of violence is high in the weeks following the election, emphasizing the possibility of militia and vigilante attacks against progressive protestors through a variety of tactics. A celebratory moment for Biden voters can quickly be warped by white supremacists who will not say goodbye to their leader—their icon. PRA also points to the danger of individual white nationalists committing political violence against “named enemies and minority communities” and appearances by accelerationist factions such as the “Boogaloo Boys,” who may seek to “destabilize protest space and escalate violence.” Violence against LGBTQ people, warns PRA, will continue to escalate in an already deadly year for trans women of color specifically. “As the Trump campaign continues to weaponize antitrans rhetoric, transgender people of color will continue to face direct harm or indirect neglect by establishment forces,” the memo said.

Clearly white supremacy will not go away after a single election, and there is still a monumental amount of work to do. It’s time to begin that work.

PRA also cautions that violent white supremacist social movements, as well as the broad web of systemic white supremacy that is baked into the structure of the United States, will not go away with a Biden presidential win. “Even one incident of large-scale violence…will inevitably result in new repressive measures from the government that will target racial-justice movements and the left,” they warn. “Movement efforts to defund the police and ongoing protests against lack of police accountability and for racial justice may lead to higher levels of recruitment and attraction of active-duty or recent law enforcement operatives into militia-type groups.” Highlighting the importance of continuing to fight structural white supremacy and recognizing how mainstream systems of governance and surveillance aid fringe far-right extremist groups are urgent tasks, despite a Democratic win.

“I think there’s nothing about this election that tells us that things are fine in regards to the place of white supremacy in American life, regardless of who wins,” Belew said. “I think this is, in many ways, a resounding victory for people who would like to see more white supremacy in our culture.” Referencing the broad web of histories and systems that produce racist outcomes in the United States—like maternal-health rates, mass incarceration of Black and Brown populations, wealth disparity, and home ownership—Belew says people don’t necessarily need to believe in the superiority of the white race to reproduce systemic white supremacy. Being vigilant of and opposing structures that are supportive of white supremacy, such as, for example, the police and the criminal justice system, is essential; though a Biden win will no doubt make the political landscape less chaotic, structural racism persists, and will not disappear with a Democrat in the White House.

Indeed, the PRA memo, speculating on the possibility of a Democratic presidency, asks whether Biden’s moderate liberalism will accept “soft” versions of white-identity claims to increase immigration restrictions; the tendency of the white moderate to give space to less overt white supremacist policies must be watched and countered. Globally, U.S. imperialism and neocolonialist extraction from the Global South are also manifestations of white supremacy that are endorsed and enforced by neoliberal administrations; supporting and rallying around indigenous land defenders across the Global South is an essential task for the left, as is calling out Biden’s extractivist tendencies.

As for how to guard against the organized fringe groups in the weeks following the election, and deal with the potential risk of domestic terrorism, Belew says the best thing we can do is pay attention to these movements—and take them seriously. “I do think people paying attention to this movement is the opposite of what it wants, so I think that people who read this article can do a great thing to help by simply paying attention to the stories about white-power activism,” she said. “I really do think the sense of coalition politics that can arise out of impacted communities joining together might present one way for us to move forward.” PRA has also made a number of resources available for left-wing protesters seeking to assess risk and protect themselves, a highly recommended read for anyone planning to attend ongoing pro democracy or antifascist protests.

After one of the most polarizing elections in recent U.S. history, with the Republicans now openly trying to stage a coup, it would be folly to ignore the very real problem of white supremacy, both from fringe groups and from less-overt white moderates. Calls from white, liberal celebrities like Katy Perry to reach out to Trump supporters instead of holding them accountable for voting for white supremacy and the news of a potential Trump book deal are only a couple of examples of the many cultural layers that sustain white supremacy in the United States. Clearly white supremacy will not go away after a single election, and there is still a monumental amount of work to do. It’s time to begin that work.