Flies and Lies5 Feminist Takeaways from the Vice Presidential Debate 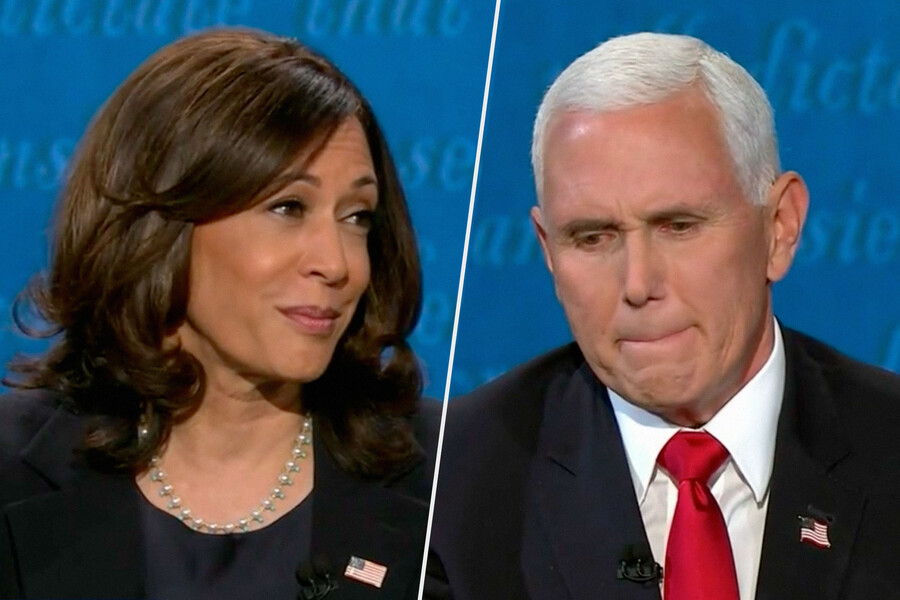 On October 7, Senator Kamala Harris and Vice President Mike Pence came together in Salt Lake City—separated by 12 feet and two plexiglass dividers—to debate each other for the first and only time. For 90 minutes, Harris attempted to address the topics on the night’s agenda, like abortion access and climate change, though Pence repeatedly interrupted her while also evading questions about everything from the Trump administration’s response to the COVID-19 pandemic to whether his boss is committed to peacefully transferring power if he loses. There was light sparring over the future of Roe v. Wade, though neither candidate actually answered moderator Susan Page’s question about securing abortion access for their home states; likewise, both dodged direct questions about their own potential presidencies should Trump or Biden—both of whom are in their mid-to-late 70s—die during his White House tenure.

The real star of the show, and perhaps a sign of the lackluster nature of the debate, was a fly that landed on Pence’s head and stayed there for more than two minutes. The insect promptly inspired multiple Twitter and TikTok accounts, but also made viewers question whether the visitor was an intentional part of the vice president’s vampiric aesthetic or if Pence’s hair was so shellacked in place that he simply didn’t notice it. Either way, the vice presidential debate typically doesn’t have an impact on voters, and less so when more than 5.5 million people have already cast their votes. But while it’s doubtful that Harris and Pence’s respective performances will do much to move the needle, we’re still rounding up five key takeaways for feminists who either couldn’t stomach actually watching or did and were left wondering what‚ if anything, they were expected to learn from it.

1. Climate Change is on the Ballot

When asked how the Trump administration will address the country’s economic crisis, Pence confidently stated that 2021 would be the biggest economic growth period in U.S. history, but quickly pivoted to the attack. “They want to bury our economy under a $2 trillion Green New Deal,” Pence said. “[They] want to abolish fossil fuels, and ban fracking, which would cost hundreds of thousands of American jobs all across the heartland.” Criticizing the Biden-Harris campaign for wanting to reduce fossil fuels and fracking (which is, in fact, a fantastic idea) shows how little Pence understands about what renewable energy jobs will do for both the U.S. economy and the environment. Though Harris emphasized that Biden won’t ban fracking outright—admittedly, his stance on the subject has been confusing—she did say their campaign understands that climate change “is an existential threat to us as human beings.” Meanwhile, Pence said “we’ll follow the science” (a clear lie, given Trump’s recent “science doesn’t know” response to wildfires ravaging the West coast) and that the “climate is changing.” The best scientists and researchers in the world have already made clear that climate change is an issue that requires urgent attention. There isn’t time to debate details regarding the number of hurricanes or entertain redirections about forest management; climate change has to be tackled immediately—through measures like the Green New Deal.

2. It’s Time to Figure Out Healthcare

The Trump administration has been attempting to roll back the Affordable Care Act for three years, but despite Trump’s promises to replace it, he has yet to present an alternative plan that would protect people with pre-existing conditions from exorbitant co-pays or being dropped from insurance altogether. Harris brought out the big guns on this issue, reminding Americans that Amy Coney Barrett’s appointment to the Supreme Court could permanently undo the ACA, leaving millions of Americans who’ve had COVID-19 from getting healthcare. “If you have a pre-existing condition—heart disease, diabetes, breast cancer—they’re coming for you,” Harris said. “If you love someone who has a pre-existing condition, they’re coming for you. If you’re under the age of 26 on your parents’ coverage, they’re coming for you.” Pence responded, weakly, that he and Trump “have a plan to improve healthcare and protect pre-existing conditions for every American,” but that’s simply untrue. Harris was both appropriately passionate and absolutely correct: Keeping Barrett off the Supreme Court is not just about the court’s ideological balance—it’s also about protecting our most vulnerable neighbors.

Page asked Pence a direct question: “If Roe v. Wade is overturned, what would you want Indiana to do? Would you want your home state to ban all abortions?” Pence, of course, has spent his political career trying to outlaw and criminalize abortion, but now that the opportunity has presented itself via Barrett’s nomination, he’s refusing to answer the question head-on. That’s most likely because two-thirds of Americans think that Roe v. Wade should remain intact, and because Pence knows Trump is currently behind Biden in the polls. Nevertheless, neither Pence nor Harris committed to expanding abortion access protections in the event that the Supreme Court overturns the ruling. Though Harris said she will “always fight for a woman’s right to make a decision about her own body,” that’s not a commitment to encoding abortion protections in the law itself. As always, we will have to continue donating to abortion funds and to organizations fighting to expand abortion access.

In the seven months since Breonna Taylor was shot and killed by Louisville police, her name has become shorthand for police brutality. But the vice-presidential debates made clear that her name has also become a shorthand to denote whether one does or doesn’t care about Black women. It’s an unfair weight to place upon the memory—and family—of a woman murdered at the age of 26, especially given how Taylor’s death has been co-opted to do everything from sell merch and magazines to increase engagement for social justice–oriented Instagram accounts. During the debate, Page asked the candidates, “In the case of Breonna Taylor, was justice done?” Pence responded easily: “I trust our justice system.” And while Harris’s answer was more fleshed out (she got emotional before bringing up the idea of criminal-justice reform), neither candidate stood firmly against police or took the opportunity to address the actual tragedy of her death. Ultimately, the use of Taylor as a frame for understanding where wealthy, powerful people stand on Black peoples’ lives and police brutality just feels wrong. She’s a woman who died, not a concept or a lens.

5. Men Will Talk Over Women Every Single Time

In the first presidential debate of the year, Trump sharply and repeatedly cut off Biden and spoke loudly and angrily over him, to no one’s surprise. Pence was quieter and more measured, but no less obnoxious in repeatedly interrupting and speaking over Harris, as well as going over the time limit for his answers again and again. Harris’s responses, verbal and otherwise, resonated with viewers—especially women, and especially women of color: She shook her head, she smiled it off, she gave him that patented first-grade-teacher grin and nod, and she ultimately said a line that’s been all over the internet (and has already, inevitably, been monetized for t-shirts and other merch): “Mr. Vice President, I’m speaking.” Her calm but commanding responses to Pence’s disregard for the debating guidelines did what Page’s ineffectual repetition of “Thank you, Mr. Vice President” failed to. With one phrase, Harris reminded audiences of the numerous double standards that come with being a woman in politics, and a woman in power: First, that she, as a woman of color, especially a Black one, had to maintain her cool lest she be considered “aggressive,” a talking point that pundits raced to deploy in post-debate analysis. And second, that she can’t rely on anyone else to willingly give her the time that is hers. Harris had to claim it, and so she did, in a moment that will remain resonant for those who watched.

Read this Next: White Men Screaming 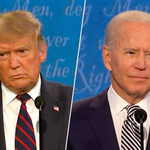 by Evette Dionne
The debate was all over the place. Here’s some clarity.