No Crime, No Punishment#8toAbolition Imagines a Future without Police and Prisons 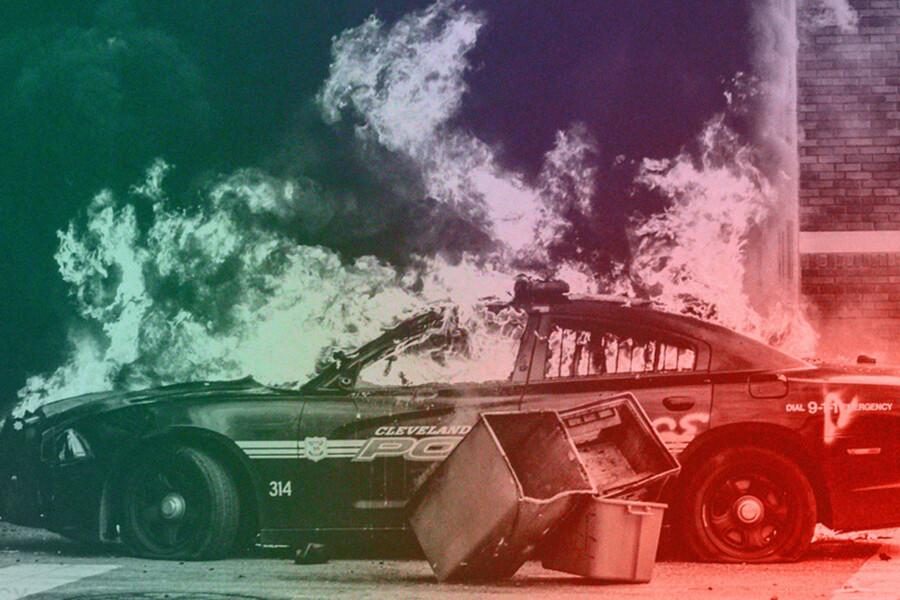 In recent weeks, mass protests that began in the wake of the police murders of George Floyd, Breonna Taylor, and too many other Black victims have shifted from demanding justice for individual acts of police violence to demanding sweeping, transformative changes—namely, disarming, defunding, and even abolishing the police. Apparently the concept of “defunding the police” is interpreted differently by politicians and media outlets, many of which are arguing that the phrase is unclear and making a different demand than it implies. But the #8toAbolition campaign, led by Black and Brown abolitionists, is playing an essential role in educating the public and shutting down misinformation.

The #8toAbolition campaign outlines specific demands that amount to defunding the police and eventually abolishing police forces altogether, including demilitarizing police forces, reinvesting in communities, removing police officers from schools, freeing people from jails and prisons (let’s not forget abolition is about police and prisons), and repealing laws that criminalize survival. By issuing these powerful demands, #8toAbolition is also forcing us to interrogate and then redefine our understanding and categorizing of crime and violence. Why do we only view certain acts as criminal and violent? In our carceral, capitalist police state, where criminalization and surveillance are business as usual, the idea of a society without prisons and policing requires deep imagination. We need to understand the long-obscured truth that crime is socially constructed, often along race and class lines.

Societal definitions of the violent and criminal are designed to absolve the violence and criminality inherent to our white-supremacist capitalist system. As legal expert and journalist Dave McKenna wrote in a recent Twitter thread invoking the ongoing racist crisis of poisoned water in Flint, Michigan, “Poison a person, go to jail, they call you a felon for life. Poison a city resulting in dozens of deaths and thousands with brain damage, get a teaching fellowship at Harvard, they call you ex-Governor of Michigan Rick Snyder.” In the same thread, McKenna highlighted the fact that wage theft by employers and capitalists is the most prevalent form of theft—far more common than the armed robberies that are frequently cited by those who defend the police state.

It could easily be argued that every cent billionaire capitalists make is from some degree of theft and exploitation, yet nearly none of the Wall Street bankers responsible for the 2008 financial crash spent a day in jail. The poor and exploited being unable to care for themselves and afford the resources they need to live is another form of violence. Yet capitalism normalizes lethally violent acts that render the country unlivable for low-income communities of color, and especially Black communities that have been subjected to the violent looting of redlining and economic disenfranchisement for generations. Robberies and other forms of theft are often committed out of necessity by the marginalized for survival. As early as 1902, the famed civil rights lawyer Clarence Darrow argued in a speech to imprisoned people, “Nobody would steal if he could get something of his own some easier way. Nobody will commit burglary when he has a house full.”

These theft-related crimes are more likely to be alleviated by wealth redistribution and investment in communities, as demanded by abolition, than by massive investment in policing and prisons. When people’s needs are met by their communities and a robust welfare state, they’re less likely to be forced to resort to unsafe, criminalized behaviors to support themselves. The United States spends more than $100 billion on policing every year while simultaneously defunding and eroding essential community resources such as healthcare, education, and housing. What we get in return are far too many people being criminalized in a society where we invest drastically more in prisons, policing, and the military than in basic needs and resources. Meanwhile, exploitation and wealth hoarding by mostly white billionaires and white-led corporations directly contribute to millions dying every day.

When they hoard wealth by denying living wages and benefits to workers and refusing to pay taxes to support a thriving social safety net, vulnerable, low-income communities of color are unable to afford the astronomical costs of housing and healthcare. Abolition requires us to recognize that the most common, dangerous violence—from the denial of basic needs like healthcare and housing and drone strikes and war crimes committed in nonwhite countries to laws that allow employers to deny living wages and exploit labor—is carried out and institutionalized by the state. Prisons, police, and the military play an indispensable role in maintaining and enforcing the social construction of violence and crime: They exist largely to protect the right of the state and the right of the wealthy and powerful to be violent with impunity. Carceral Capitalism, Jackie Wang’s landmark 2018 text, details the violence wrought by a mounting national trend of municipal privatization.

In order to reimburse massive bank loans to pay for city budgets (which often invest disproportionate amounts into policing), cities have relied on policing and criminalizing Black and Brown communities to generate revenue through fines, asset forfeiture abuse, prison labor exploitation, and other means. In other words, abolishing police and prisons must go hand in hand with dismantling capitalism. After all, police enact violence not just through physical assaults and killings, but also through inherently violent enforcement of private property rights to enable massive wealth inequality and exploitation. For example, protesters and everyday exploited workers may be arrested and imprisoned for property damage or stealing goods from massive multibillion-dollar corporations. But in contrast, the rules of our carceral, capitalist police state will protect the well-being and property of these same corporations, and allow them to pay starvation wages and exploit workers with impunity.

But because of how our conceptions of crime and violence are socially constructed, the violence of this role assumed by police and the law still evades mainstream consciousness. Instead, when most people think of crime and violence, they think of murder, assault, and especially rape and sexual violence. Conversations about abolition almost always lead to people invoking victims and survivors of sexual violence as props to defend prisons and policing. But this argument ignores how at least 40 percent of police officers are domestic abusers, 60 percent of prison rapes are perpetrated by guards and staff, 90 percent of incarcerated women are survivors of sexual violence (one study found 76 percent of incarcerated women in Oregon were sexually assaulted before turning 13), and hundreds of thousands of rape kits sit untested in police departments across the country. 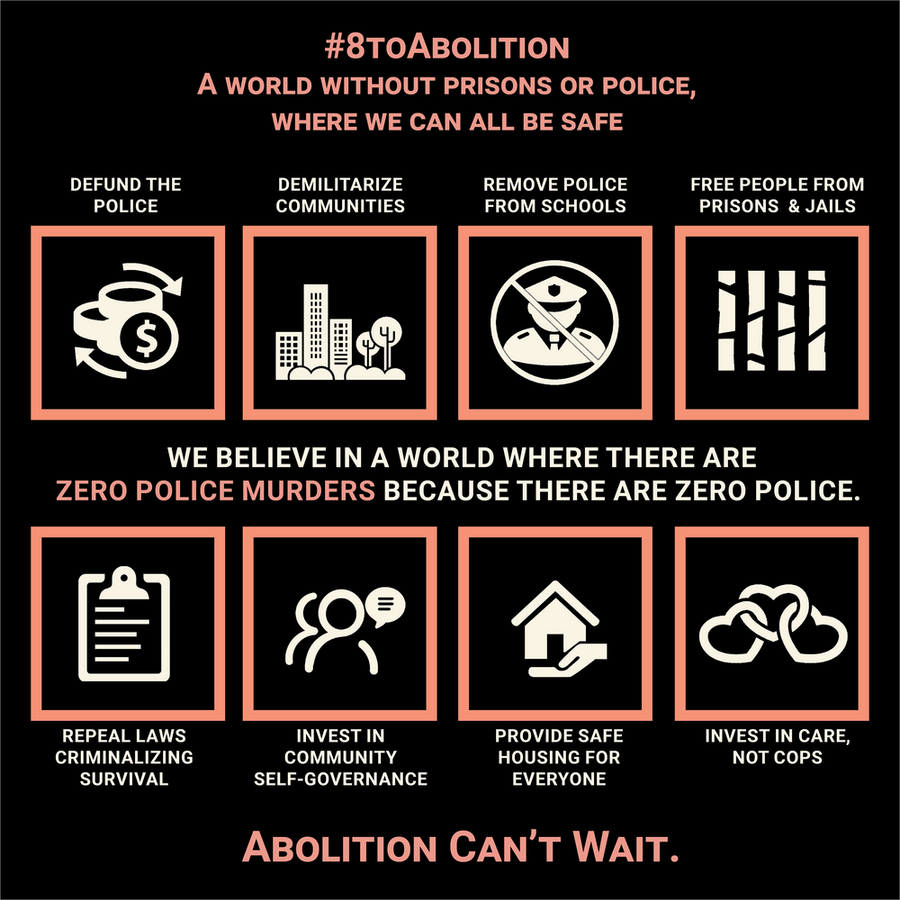 The internet is packed with stories of victims recounting how officers dismissed their reports and harassed, intimidated, and even attempted to gaslight them. All of this might factor into the fact that between 67 and 85 percent of sexual assaults are unreported. The Rape, Abuse & Incest National Network estimates five out of 1,000 rapists will be incarcerated for their acts of violence, meaning even if we assume prisons protect victims from their abusers, then the system is still failing them. Most people who invoke victims of abuse to defend the very system that oppresses them are the same people who don’t believe victims when they come forward. They certainly don’t care about the victims of notoriously high rates of rape within prisons, which supposedly exist to rehabilitate, but often only lead to more harm.

White-led feminist activism has historically played a critical role in expanding and legitimizing the carceral police state to advance white-centric understandings of survivor justice. White feminists pushed for acknowledgment of rape as criminal and violent without recognizing that prisons and policing are more likely to harm than support victims—especially those who are women of color, sex workers, undocumented, single mothers, and queer and trans—and that marginalized victims are often treated with hostility and suspicion. In contrast, Black women–led reproductive-justice advocacy groups have always recognized that criminalization, policing, and incarceration are inherently antifeminist, and have recently united to call for defunding the police in an open letter: “As a reproductive justice community, we believe that it is a human right for families to live without the fear of police violence, and offer an alternative path other than one of state-sanctioned violence and a militarized police force in this pivotal moment.”

From the mounting trend of policing and criminalizing the pregnancy outcomes and self-managed abortions of people with wombs, to the prevalence of Black families and families of color being torn apart by the prison system, abolition is requisite to reproductive justice. Abolition requires an understanding that the crisis we face isn’t about individual acts, individual failures of the state, and certainly not about individual bad cops. Abolition is about liberating us from the inherently violent carceral, capitalist police state in which we live. It requires overhauling everything—how we define and understand violence and criminality; how we approach emergency response; and how we understand healing, accountability, and justice.

As complicated—even impossible—as that may sound, #8toAbolition provides an agenda of simple, meaningful steps that can take us there, while deconstructing precisely why the system is unreformable. As the abolition group Critical Resistance has put it, reforms only “improve policing’s war on us,” rather than alleviate the violent conditions inherent to policing. And in addition to fighting for and demanding the eight steps laid out by #8toAbolition from our representatives, abolition also requires us to work on ourselves, and question the definitions of crime and violence we’ve been taught for so long.