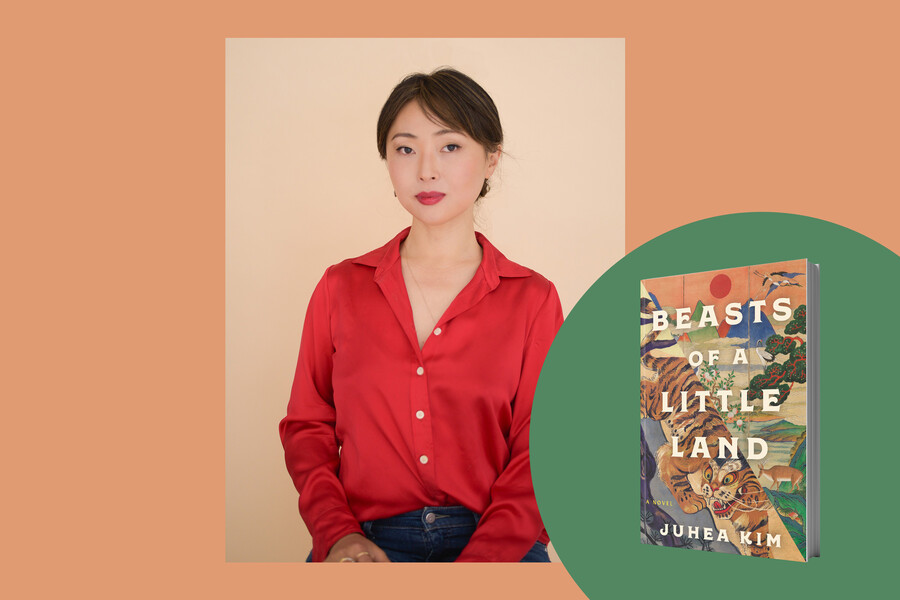 The year is 1918. Nam JungHo, a 12-year-old orphan, has just entered the streets of Seoul, South Korea, with nothing but two pennies, a silver ring, and a cigarette case. Further north in Pyongyang, 10-year-old Jade enlists herself as a courtesan’s apprentice––a sacrifice that secures money, food, and the chance of a better life for her family while simultaneously severing her from them forever. Two humble beginnings to two lives that will repeatedly collide during Korea’s war-torn decades. It is with this narrative that Portland-based writer and artist Juhea Kim, who runs the sustainable lifestyle and ecological literature magazine Peaceful Dumpling, debuts her first novel, Beasts of a Little Land, which comes out this month.

Kim follows multiple characters as their paths unfold and intertwine during early 20th century Korea. They navigate through Japanese occupation, the Korean independence movement, and the country’s eventual division as Kim lays bare the wreckage and trauma left in the wake of war and imperialism. The book explores the love that holds people together, the violence that tears them apart, and the persistence of empathy, compassion, and inyeon—destiny that links two people over the course of their lives—all of which make humanity whole. Bitch talked to Juhea Kim about her inspiration, Korean colonial history, and how some literature breaks us open.

The novel begins in 1917 and ends in 1965, spanning Japanese occupation of Korea, the subsequent Korean independence movement, and World War II. What influenced your decision to use this frame?

This novel was sparked by my family history. My maternal grandfather, whom I never got to meet, was a very poor man at the time of his death. He made his living as a laborer. But he had all of these strange stories that he would tell his children, like [one about] driving around in Shanghai in the 1940s and walking great distances, a whole day and night, from what is now North Korea back to Incheon to see his infant son. I would think, that is a crazy long distance, and what was he doing up there? He also played tennis really well—he was a swimmer, a runner, an athlete.

There are all these parts to him that don’t really make sense for somebody who was a bricklayer. And at that time, if you were a working-class laborer in Korea in the 1940s, you [wouldn’t] go to Shanghai for no reason. If you were driving a car, it probably meant you were involved in the movement in some way. So based on that, I came up with this character, JungHo. JungHo is not my grandfather, but this family history gave me inspiration for this character who comes from nothing and who unwittingly gets involved in the independence movement.

And I wanted to show the story of how Korea gets divided. It is a personal fascination of mine. It’s a little bit strange that these two great superpowers, the United States and Russia, who are so far away from Korea culturally and geographically, meet at this midpoint in a very small and inconspicuous land––it’s a little land. But it became this point of world contention and to this day [remains] a huge ideological and political rift. And that’s why [the novel] had to go to the place it did.

The narrative of Beasts of a Little Land is built on multiple storylines that intersect throughout generations. Can you tell me a little bit more about your choice to structure the novel the way you did?

It was a real challenge; I’m not going to lie. As a debut novelist, I really took a big bite. But I knew what kind of resonance I wanted to have. I’m the kind of writer that thinks about poignancy: How do I want the reader to be moved at the end of the novel? I walk backwards from there.

The inspiration for [this novel], in terms of emotional poignancy, was Bruckner’s Symphony No. 8. It’s about redemption; it’s about grace; it’s about this feeling at the end of this life of struggle that there is [a] grace you leave with. I wanted that feeling at the end of the novel. And the only way I could figure that out was to structure it in such a symphonic scale. I am a musician; I play the cello. Portland’s Schnitzer Concert Hall is where I played Bruckner’s Symphony No. 8 when I was 14. This piece of music that I encountered and experienced when I was 14—can you imagine [having something] impact your life so much that you write your first book based just on that?

The symphony’s structured like a cathedral––you’re laying down stone block after stone block, and not all of it is going to be apparent at first. If you build a cathedral, you don’t build a complete façade first; you build everything at the same time, and it all fits together [at the end]. You have to know and understand where the keystone is going to end up, right? You have to have a complete idea of how it’s going to link together. With that abstract image in mind, the structure of the book kind of came. The relationship is abstract. Bruckner was not writing music about Korean history. But I love the process of [being] inspired by different mediums.

Like a translation of what that art embodies into a literary form?

I don’t go over the Korean War probably because a) it’s already a very long book, and there’s a lot of war and violence and b) the Korean War is more familiar, I think, to Americans. There are some good books out there that cover [the Korean War], like Chang-rae Lee’s The Surrendered, for example. It wasn’t [something] that I necessarily wanted to uncover, but I did want to go all the way to the end of these character’s lives.

Why highlight this portion of Korean history? What do you hope the impact will be?

I like to preface this by saying that I am a humanitarian; I believe in us all being one family. There’s certainly no way in which I have any personal feelings against an individual Japanese person or a person of any ancestry––we are all human beings. However, imperialism and colonialism are things that are still plaguing the world. All the things that [these characters are] dealing with––injustice, violence, poverty––are still with us today. If anything, the world is [in] even greater peril now.

There are things that we live and die for—such as love, friendship, loyalty, and compassion—that are antidotes for those ills. These are all things that these characters use to deal with their circumstances, and it’s just as applicable today as it was 100 years ago. I don’t think that this novel [says,] “Learn this part of Korean history. It’s interesting. You didn’t know this.” I would really love for people to [see that what I’m writing] is really relevant to all of us now, not just because [they] didn’t know anything about Korean history but because the issues [in the novel] face humanity now—it’s about human experience.

The Siberian tiger makes its first appearance in the novel when it collides with a group of Japanese soldiers who get lost hunting in the mountains of Korea. As the novel progresses, the tiger becomes a recurring figure—revered, admired, and driven into near extinction by poaching and war. How do you see this novel interacting with your previous nonfiction work in conservation, environmentalism, and sustainability?

I see all of this as one thing, surprisingly. [My writing] is so varied. Sometimes I’m writing about a Native American reservation in Oregon, sometimes I’m writing a Korean historical novel, and sometimes my short fiction is totally speculative. To be honest, they all seem like one thing to me because I have a mission statement. I built this mission statement years ago when I was really struggling to break through, and I asked myself: Why am I writing? I came up with one sentence: “To use my talent for writing to save nature and reduce animal suffering.” Everything I do, every project I attempt, falls [in line with] that. I can be writing about veganism; I can be writing an essay about salmon; I can be writing this book (a part of the author proceeds [will] benefit a tiger conservation organization in Russia). They all fit together, and I’m so excited by that. I have enough motivation to get up and say, “I’m going to keep trying, and this is still what I want to do, despite all the difficulties” because I’m doing it for a purpose. I’m excited to [do] more of all those things.

That’s my advice to all aspiring writers—you need to understand and find your voice and your mission. If you have those two things, you can break through a lot of brick walls.

It’s important to be broken open every once in a while, to continue to be soft.

I really want to reach people in their hearts. I think that everybody knows that the world is at a breaking point, that there are many evils in the world. Intellectually, we all understand that. But people don’t do anything about it. We have all the science we need for people to take action, but we don’t. I think the only way we do things differently is if our hearts are moved and if our hearts are broken. Empathy is an emotion that you feel when your heart is broken. You don’t get empathy from being happy all the time. You have to understand that there is heartbreak in the world, that other people’s suffering can reach you. That’s what I am going for. One of the most rewarding comments I read is, “Your book made me cry.” It makes me happy—it means that I opened them, [that my book] broke them open.

So you hope this novel can counteract some of humanity’s desensitization?

Right, totally. We create [a] shell because we need to be able to survive in the world. If I were broken apart by every misfortune I see, I wouldn’t be able to survive. We create our shell because that helps us get through the day, and I understand that it’s necessary. But the harder that shell grows, [the] less human you become; [you start becoming more like] a machine that’s really good at surviving. It’s important to be broken open every once in a while, to continue to be soft.

Were there any unanswered questions or places you felt you’d like to keep exploring once you completed the novel?

No. I am a tie-up-every-loose-end type of storyteller. I think that’s actually a very Korean way of storytelling. The Korean way of storytelling really places a lot of emphasis on poignancy. Emotional resonance is extremely important to Korean literature, and storytelling has a certain beat that you can feel. A major trait [of Korean storytelling], I think, is to give each character the fate that they deserve. For me, there was nothing left unturned; [I didn’t] wonder about what happened. I feel very happy about the [characters’] resolution. I think they deserved it, and I think that they have come to terms with it.

Read this Next: “Libertie” Questions the Nature of Freedom Itself 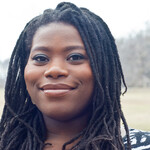 by Jordan Taliha McDonald
What does it mean to be free?

Edi Kim is an intern for Bitch, student, and poet currently based in Portland, Oregon. She studies English and Creative Writing at Reed College.