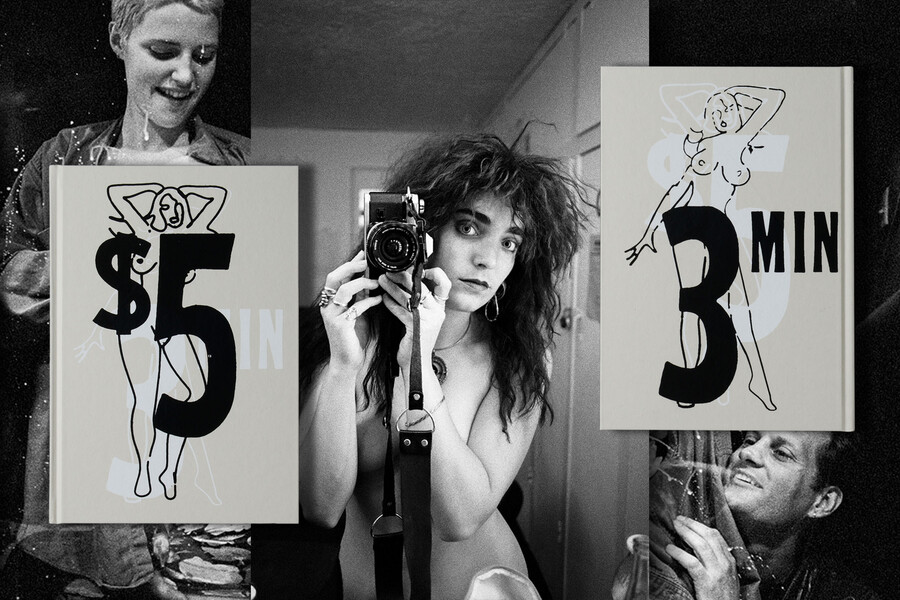 To work at The Lusty Lady peep show in San Francisco’s North Beach neighborhood was to slip down a rabbit hole into an exhibitionist dystopia, and photographer (and former Lusty) Cammie Toloui’s recently published book 5 Dollars for 3 Minutes [Void], which is already in its second printing, perfectly captures the oddball funk and philosophy of the place. I say this as both an avid fan of photojournalism and a former Lusty myself.

Born into a strict Iranian family in 1969 Toloui shot the book’s photos in the early 1990s. In order to fund her photojournalism degree from San Francisco State University, she began working as a dancer and peep-show girl. Well before digital cameras came on the scene, photo supplies were a recurring expense, and Toloui took advantage of the work’s high pay and short hours. Among other like-minded young women, the eternal undergrad questions of How do I pay for school? and What is compelling to me as an artist? fused into the origin story for 5 Dollars for 3 Minutes.

“The Lusty Lady was a unique place to work,” writes Toloui in the book’s introduction, one that differed from conventional strip clubs. “Part of the theater is a peep-show, where customers sit in a private booth and feed money into a machine, then watch as a panel slides up to reveal a mirrored room full of nearly-naked women, dancing, slinking and pressing their sweet parts to the glass for the customer to ogle,” she writes. “There is no physical contact, and the dancers got paid an hourly rate via paycheck with taxes taken out and everything, just like most people do.” In this regard, the Lusty was a relatively low-stress adult-industry gig. In contrast to clubs where strippers were typically required to pay substantial “house fees” to management and had to hustle their income from onstage tips and private dances, Lusties were paid an hourly wage and were entitled to raises. (The venue further defied convention in 1997, when it became the first of its kind to unionize, an effort documented in Julia Query’s acclaimed 2000 documentary Live Nude Girls UNITE!)

Two years after Toloui began working at the Lusty, she was enrolled in a class taught by photojournalist and professor Ken Kobre. “We were learning the art of the photo story, and one of [our] first assignments was to photographically document our own lives for a week.” At first, Toloui wasn’t sure that documenting her work would be either ethically or logistically legal, but brought her camera into the Private Pleasures booth anyway. Assuming that no paying patron would want to be captured on film, she enlisted a friend to pose as a customer. The friend never showed—“luckily,” Toloui explains, “because it forced me to take a chance, and the first customer I asked said yes. I couldn’t believe it. Even more unbelievable, he came back a few days later and asked me to take his picture again.”

In class the following week, Toloui’s fellow students shared pictures of quotidian pursuits: walking dogs, making coffee, seeing friends. When it was Toloui’s turn, the room went still. The ripple her photos sent through the room was profound enough to stun Kobre, who later wrote about the moment movingly (albeit in a way that reflected the prevailing aesthetic bias of the time; it’s difficult to imagine a contemporary professor writing of a student, “From her punk outfit, I would not have predicted her observant eye and careful technique”).

The images and text in 5 Dollars for 3 Minutes reveal Toloui as a tough-girl documentarian, both savvy and sympathetic as she takes the reader from the dressing room to the stage to the Private Pleasures booth with a frank tenderness. Taken as a whole, the work has an air of surrealism: After all, how often does the average person glimpse the inside of a workplace whose foundational business model is facilitating masturbation? Its intrinsically graphic nature gives Toloui’s work a touch of the art-meets-street-photography grabbiness that can initially feel exploitative and tabloid-esque; but a closer look reveals to be the keen eye of a true artist-observer. It’s a little bit Weegee and a touch Diane Arbus, and has some of Nan Goldin’s eye for off-kilter intimacy peppered throughout, but it’s all executed with Toloui’s own punky immediacy. And the photos, shot entirely in black and white and showing the full scope of the Lusty right down to the streaked peep-show windows, is aesthetically right on: A glossier, more glamorous style would have been unrealistic, and a more discreet rendering of the subjects and setting would have been a dodge.

Perhaps as interesting as the photos themselves is Toloui’s revelations about the challenges she faced in getting the work exhibited and published. Even venues that welcome explicit depictions of female nudity bridle when the body laid bare is male. “What I wanted to show was the taboo subject of male desire, which is to say their need,” she writes. “I felt I had captured an unexamined side of the human condition, but as far as curators and publishers were concerned, it was as if they couldn’t see past the erect cocks.”

But Toloui’s talent prevailed, and over the years she has been awarded both the New York Times Award for Excellence in Photojournalism and the Greg Robinson Memorial Photojournalism Scholarship. Photos from her Lusty Lady series have been shown in London’s Tate Modern, New York’s New Museum of Contemporary Art, the San Francisco Museum of Modern Art, San Francisco Camerawork Gallery, and Wight Art Gallery in Los Angeles, among other places. Perhaps even more significant an achievement, Toloui is a member of the pioneering all-female punk-rap group the Yeastie Girlz, who put out the seminal 1988 album Ovary Action.

Though the life Toloui lives how is worlds away from the punk-porn-grunge mélange of her early 20s in San Francisco, she still keeps her finger on the pulse of subversion by continuing to pursue taboo photographic subjects, as well as through her jewelry line UnMuted Designs, and new efforts with the Yeastiez. With her discerning and disarming artistic vision, Toloui is a feminist artist to watch.

Read this Next: Soft Power 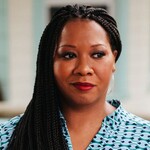 by Vanessa Willoughby
People still have a hard time recognizing that Black women need to be protected.