All the Ladies in the House“Impeachment: American Crime Story” Has a Woman Problem 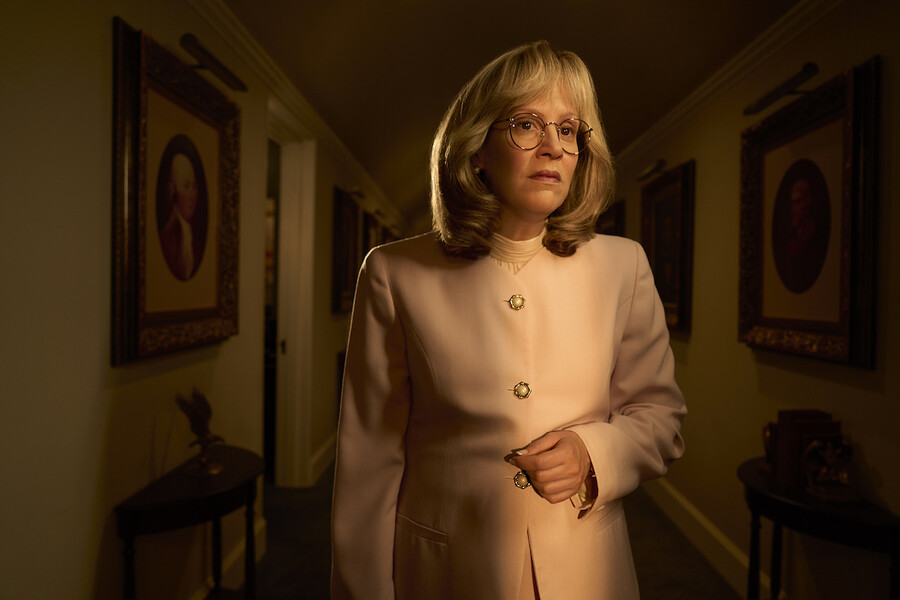 After 2016’s The People vs O.J. Simpson, and 2018’s middling follow-up The Assassination of Gianni Versace, it may very well have been inevitable that 2021’s installment of Ryan Murphy’s anthology series American Crime Story would be a dud. The latest, titled Impeachment: American Crime Story, revisits President Bill Clinton’s affair with White House intern Monica Lewinsky (a producer on the series), and promises the lofty intentions of a story told “from the perspective of its women.”

As one of the biggest political scandals in U.S. history, the Clinton-Lewinsky affair is a story most people are at least passingly familiar with. In the 23 years since news of the affair first broke, the tale has, understandably, most often been framed in terms of Clinton’s actions and responsibilities as the president of the United States, and the partisan fervor of the Congress that seized on the opportunity to punish him. Culturally, however, the scandal’s most lasting impact was on the woman at its center, who for more than two decades has been scapegoated, gaslighted, and humiliated. Impeachment tries to remedy that by retracing the steps of the events that transpired through the eyes of the women closest to it. But despite being helmed largely by head writer and executive producer Sarah Burgess, it fails tremendously on that account, for the simple reason that it does not appear to respect—or even like—any of them. What’s left is a paper-thin portrait of political women that leans into the prurient and assumes the worst about their intentions.

While none of the women fare well in the seven episodes made available to critics for review, the show’s natural and perhaps obvious villain is Linda Tripp. Perhaps the only player more key to the scandal than Clinton and Lewinsky themselves, Tripp befriended Lewinsky when they were both working at the Pentagon, and she began secretly recording their phone conversations soon after Lewinsky disclosed their affair, hoping to snag a deal for a juicy White House exposé. Played by Sarah Paulson in an unflattering fat suit and wig, Impeachment takes every ungenerous approximation of Tripp’s motives and ratchets them up to 11, leaving no room for any shred of relatable humanity. She’s a caricature who never manages to find the sympathy of the other characters in the story, much less that of the audience. Vain, pushy, nosy, insecure and self-important, Paulson’s Tripp is a woman whose own thwarted ambitions are redirected into the role of adjudicator, banishing wanton immorality from the White House at the expense of a young woman who considered her a friend.

Much was made of the decision to put Paulson in a fat suit rather than cast a capable fat actress. (Margo Martindale, who could have handily tackled the role, instead appears alongside Paulson as Lucianne Goldberg, the scoop-hunting book agent who encouraged Tripp to begin taping her calls with Lewinsky (portrayed by Beanie Feldstein). The padding and weight of the suit cause Paulson to waddle and lumber through scenes, entirely detached from the ersatz frame the audience is meant to believe is her own. Her body moves without the familiarity of embodied fatness, drawing more attention to it and subconsciously linking it to her character as a person. “Linda Tripp is the villain, and she is fat” becomes “Linda Tripp is the villain because she is fat,” an assumption reinforced by the show’s eagerness to reiterate her self-esteem issues and frequent dieting. (Tripp died in 2020.)

Paulson defended the use of the suit in a recent Los Angeles Times profile, reasoning that actors have more than just their bodies to offer to a given role. And that’s true, but it doesn’t absolve her, as one of the show’s executive producers, of making a lazy choice. As with her earlier turn as Marcia Clark in ACS: The People vs. O.J. Simpson, Paulson had the opportunity to bring new dimension to a misunderstood woman, but instead made decisions that merely reinforce the dominant perception of her.

Impeachment does try to forestall this criticism by fashioning Tripp into a classic unreliable narrator, showing that, as Tripp has admitted herself, she was initially motivated as much by her deep resentment of the Clinton administration as by anything else. But, other motives aside, Tripp genuinely believed that Lewinsky was being taken advantage of by a man too powerful to put himself at risk. And ultimately, she was right. The show blurs these lines, however, by questioning Tripp’s motivations at every turn: Did she encourage Lewinsky to have Clinton find her a job in order to entrap him in a cover-up, or to make sure that the young woman found a respectable way out of a seedy situation? The answer is probably “both.” But Impeachment lets the former hang in the air as evidence against the latter.

Linda Tripp’s other motives aside, she genuinely did believe that Lewinsky was being taken advantage of by a man too powerful to put himself at risk.

This is not to say that Impeachment should have framed Tripp’s actions as selfless or heroic. Her 2018 interview for Slate’s Slow Burn podcast suggests that Tripp made the right choice in the wrong way, and in doing so sacrificed a vulnerable colleague to a brutal press and equally cruel state apparatus. It’s little wonder that Lewinsky has been highly selective about speaking to press about the ordeal; Tripp’s betrayal ensured that Lewinsky would forever be defined by the worst period of her life.

But with the benefit of hindsight and the revival of the #MeToo movement, it’s clearer than ever that Tripp’s interpretation of the affair was correct. Lewinsky was not merely a lovesick fool pining for a married man. She was 22, fresh out of college, and unable to meaningfully consent to an affair with the leader of the free world. One of the few things Impeachment gets right is just how much more power Clinton (Clive Owen) had in the affair that Lewinsky did. When the affair becomes public as part of an investigation into another abuse of power—the sexual-harassment lawsuit filed by Paula Jones (Analeigh Ashford)—Clinton’s immediate response is to actively defame a young woman by leveraging his implied credibility against hers. Within a matter of days, the full power of the White House’s press machine is used to paint Lewinsky as a deranged stalker who had to be removed from her position in the White House because of her behavior, rather than a mildly flirtatious intern who was actively encouraged in her affections.

Despite the sheer volume of disdain the show reserves for Tripp, none of the other women in the story fare very much better. Everyone from Judith Light (as Susan Carpenter-McMillan, the antiabortion activist who became Jones’s key advisor) to Cobie Smulders (as Ann Coulter) to Edie Falco (as Hilary Clinton) is treated with tossed-off dismissiveness. Rather than reimagined players in a historical drama, each is made a sinister cog in a perpetual-motion machine, getting in where they fit in to claim their own piece of the notoriety pie. Meanwhile, the men—including Clinton himself—are largely peripheral to the story until they intersect with the women’s goals and ambitions; their sidelining serves to diminish the male abuses of power that set the story in motion, instead focusing on women ginning up a controversy that men must then come in and mitigate. The only exception is Ashford’s Jones, who is portrayed as a religious bumpkin doomed by her own naïveté. Ashford does her best with the material given to her, and elicits sympathy for a woman out of her depth, working through her own trauma while managing the ego of an abusive husband, and pressured to be a pawn in a long-running political chess match.

The one Impeachment characterization that doesn’t feel judgemental or unfair is Monica Lewinsky. Feldstein’s portrayal makes clear just how consumed Lewinsky was by the affair, and how the power dynamic between her and Clinton overwhelmingly swung in his favor. Scenes in which she dithers over Clinton’s gifts and correspondence, desperate for hints and signals that he still wants her around; or vows to shield Clinton as the scandal goes public, protecting his reputation above her own, emphasize just how young Lewinsky was, and how inexperienced at navigating romantic relationships. (A previous relationship with a high-school drama teacher reveals that she has in fact been groomed by advantageous men before.) The Monica Lewinksy of Impeachment is not crazy or deranged, as Clinton’s camp tries to assert. She is merely guileless, exploited, and ultimately betrayed.

In the end, Impeachment: American Crime Story is a show about women, the decisions they make, and the consequences they face in the aftermath. But if it set out to be from the perspective of women, it tips its hand by showing us how little it actually thinks of them.

Read this Next: Feminists Install Temporary Memorial to Rape Survivors on Washington Mall

by Sarah Mirk
The National Mall got a new memorial yesterday, if only briefly. As part of One Billion Rising, Baltimore-based feminist...