Rethinking Legacy: "Tastemakers" is a Starting Point for the Problematic History of Recipes and Food Media | Bitch Media 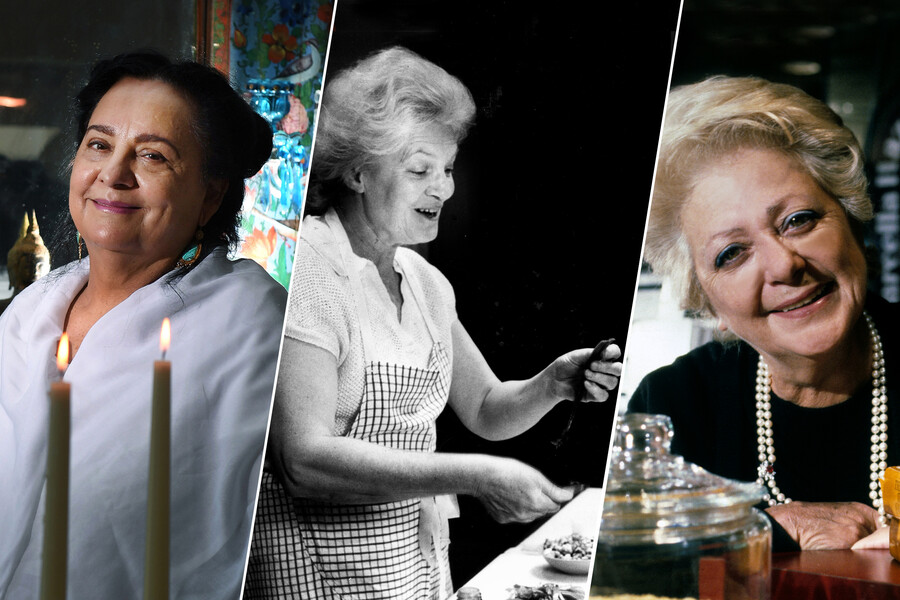 Tastemakers, published November 2021, is James Beard award-winning writer Mayukh Sen’s debut book about seven immigrant women in the food industry. Spanning different cultures and cuisines, Sen writes each chapter as a biography of one woman—in order, Chao Yang Buwei (China), Elena Zelayeta (Mexico), Madeleine Kamman (France), Marcella Hazan (Italy), Julie Sahni (India), Najmieh Batmanglij (Iran), and Norma Shirley (Jamaica). Tastemakers asks “why some women were famous in their own time, but not in ours, and why others shine brightly even today.”

We hear of Chao’s rebelliousness. We learn of Zelayeta’s loss of vision in a chapter titled “You’d Never Give a Thought to Pity Her.” Then in an interlude, we get a taste of Julia Child—Sen explains her inclusion, as a supremely successful and enduring name in food, as a “clarifying exercise” that makes a “radical statement” about the immigrant women who were included. We read about some still well-known European women—Madeleine Kamman, who famously feuded with Julia Child, and Marcella Hazan, whose cookbook I have on my limited shelf. We hear of Julie Sahni, who moved to New York from Kanpur, Najmieh Batmanglij, a refugee who self-published her books with her husband, and Norma Shirley, whose dreams of opening a restaurant in New York were sidelined for food photo styling, and then reimagined in Jamaica.

Most of these women I had never heard of before, and it was fascinating to read about how they each forged their own path. Sen’s writing is crisp, minimal and undistracting from the narrative. In all, Sen does an admirable job of curating and assembling stories, allowing access into the emotional lives of these subjects.

This book, in its gentleness, attention and reverence to these women, aims to “trouble the canon of culinary brilliance.” I wonder, though, if this canon merits perpetuation. While Madeleine Kamman may not have been memorialized in any “Food Network paeans” after her death in July 2018, she was profiled in the New York Times. Each of these seven women had a great deal of success in their lifetimes—if our measure is through the number of New York Times profiles and reviews, book sales, TV episodes. What more do we want for them—these particular women? Would preserving their legacy help immigrant women today, and how? How can we trouble contemporary measures of success for immigrants?

As I read each chapter, I wondered how one can measure one’s impact outside of capitalism as a system—when every measure of success is guided and transformed by capitalism, extraction and exploitation? 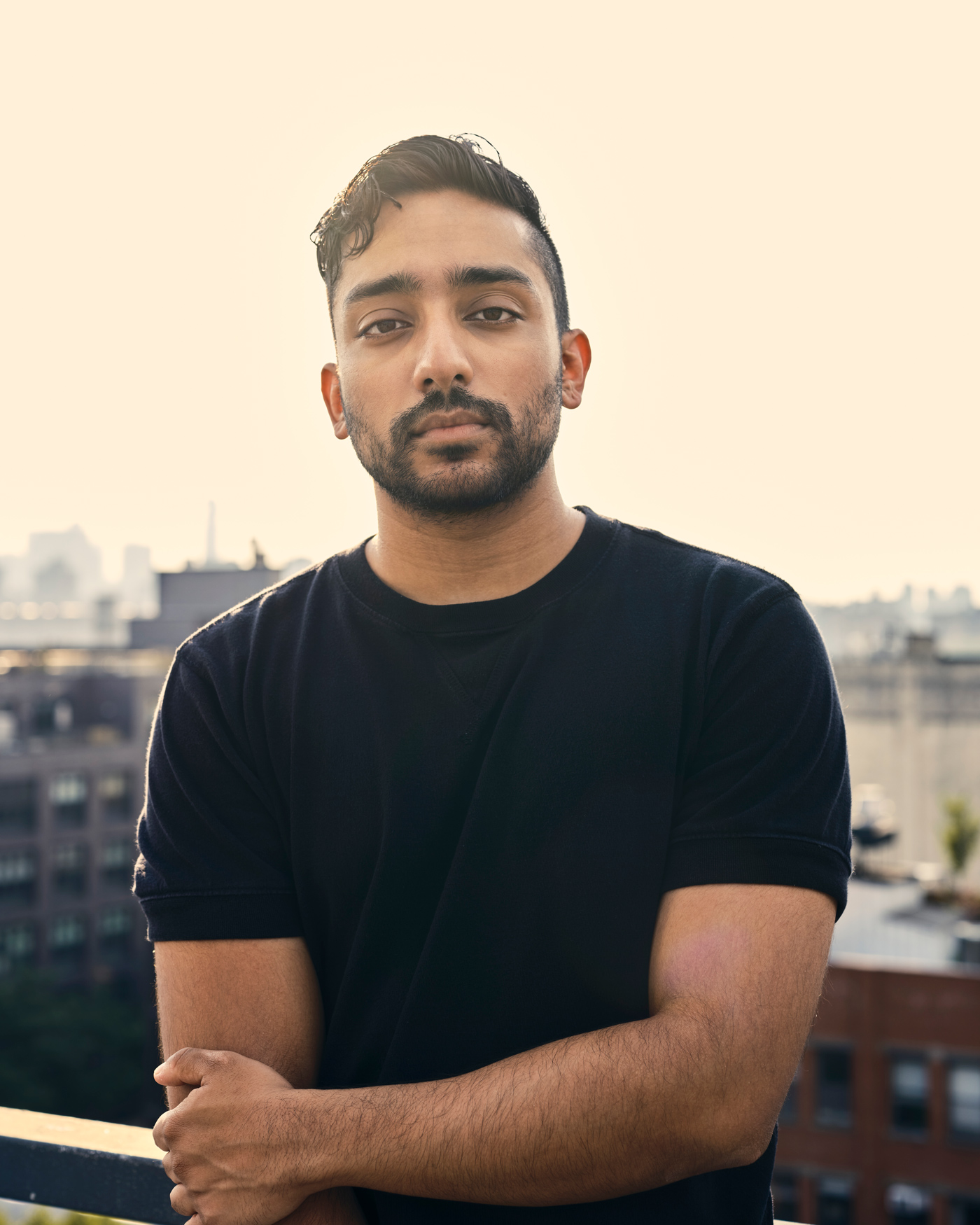 These questions are directed to all writers of history and representation. These are methodology questions. Maybe these are historiography questions. Through each chapter, we’re introduced to the woman’s struggles, immigrant story, and her inevitable success. These successes mostly follow the same pattern: some form of necessity or deep curiosity, cooking classes or a home cafe, or both, then recognition—usually from the New York Times—and then they sell a cookbook, or maybe six. They appear on TV. They rise in the 20th century, following both the pattern of immigration and of capital.

Each chapter is fashioned as a straightforward, seamless narrative, engendering closeness with the protagonist by using her first name. In reading Tastemakers, I was sensible of how seven separate biographies, not including Child’s, mounted a tough task in terms of research taking up about a third of the book with just citations and notes. I wonder, though, what further archival research would look like, and what would be gained if the writer were to  “show” the seams—the citations, the interviews, the materials—in the narrative itself? It took me out of the story when I questioned how we knew these things—that Chao’s husband “couldn’t exercise control” over her when it came to food—that Zelayeta could not save her marriage with a son, but maybe food could help—that Kamman notices her aunt’s face calm down when she kneads dough.  These are editorial choices, of course, many of which are explained in the process endnote. A similar choice that gave me pause was how Tastemaker’s great visual capacity is underplayed—there are no photos and descriptions of the women were often sparse.

The format of Tastemakers is a boon, in some ways, because the material of seven lives of highly interesting women is endless–but it may also limit the reader’s understanding of the race, class and gender analysis from which it was conceived. To piece these seven discrete biographies together, we rely heavily on the introduction, afterword and process note. After we read the promise in the introduction to “critique capitalism” and how it “devalues labor to the point where it makes people into products,” we do not get to hear directly from Sen until the end. Threads left unfinished include the discussion of race and immigration—Zelayeta was the daughter of Spanish immigrants to Mexico, and grew renowned for her Mexican cooking in San Francisco, and Kamman and Hazan were also white western Europeans. Sen deplores the dearth of archival material on Black immigrant women cooks, and this imbalance may come from that dearth. A framework to analyze class and achievement could be applied to how some of these cooks came from or married into money and security, while others turned to cooking out of dire economic necessity.

Most subjects seemed to have had troubled marriages—the parallels of their relationship to cooking, a feminized responsibility, and marriage, would have been fascinating to see analyzed. All appear to be cisgendered and straight. Sen notes that he did not go into details of people’s personal lives because they were not pertinent to their cooking and some subjects were more protective of these details. Sen’s care of Tastemaker’s subjects is commendable. I do wonder how much of that care shielded them from less adulatory observations about the way race, ethnicity and culture can be packaged, bartered, sold and reproduced for the sake of capital and cachet.

I was reminded of a white man who made his brown restaurant staff sign Non-Disclosure Agreements because he said their chai recipe was ancient from his “village girl” wife’s South Asian ancestors. Tea estates were first planted in India in the 1830s, by way of China. I did not see the brown co-owner as a girlboss for finding this loophole in racial capitalism.

Sen introduces the concept of the “food establishment” and the “food media” early on in the book. With mentions of the New York Times and James Beard in every chapter, the universe of this book felt centered around the contemporary New York food scene—and maybe that is the point. Tastemakers itself has made all of the important rounds of the circuit—NPR’s All Things Considered, the New Yorker, The Atlantic, the New York Times Book Review, and so on—food media is clearly interested.

Tastemakers made me think of legacy. Could I really be so invested in someone else’s legacy—and could I see past the tradition in recipes passed down culturally to notice individual, authorial intent? 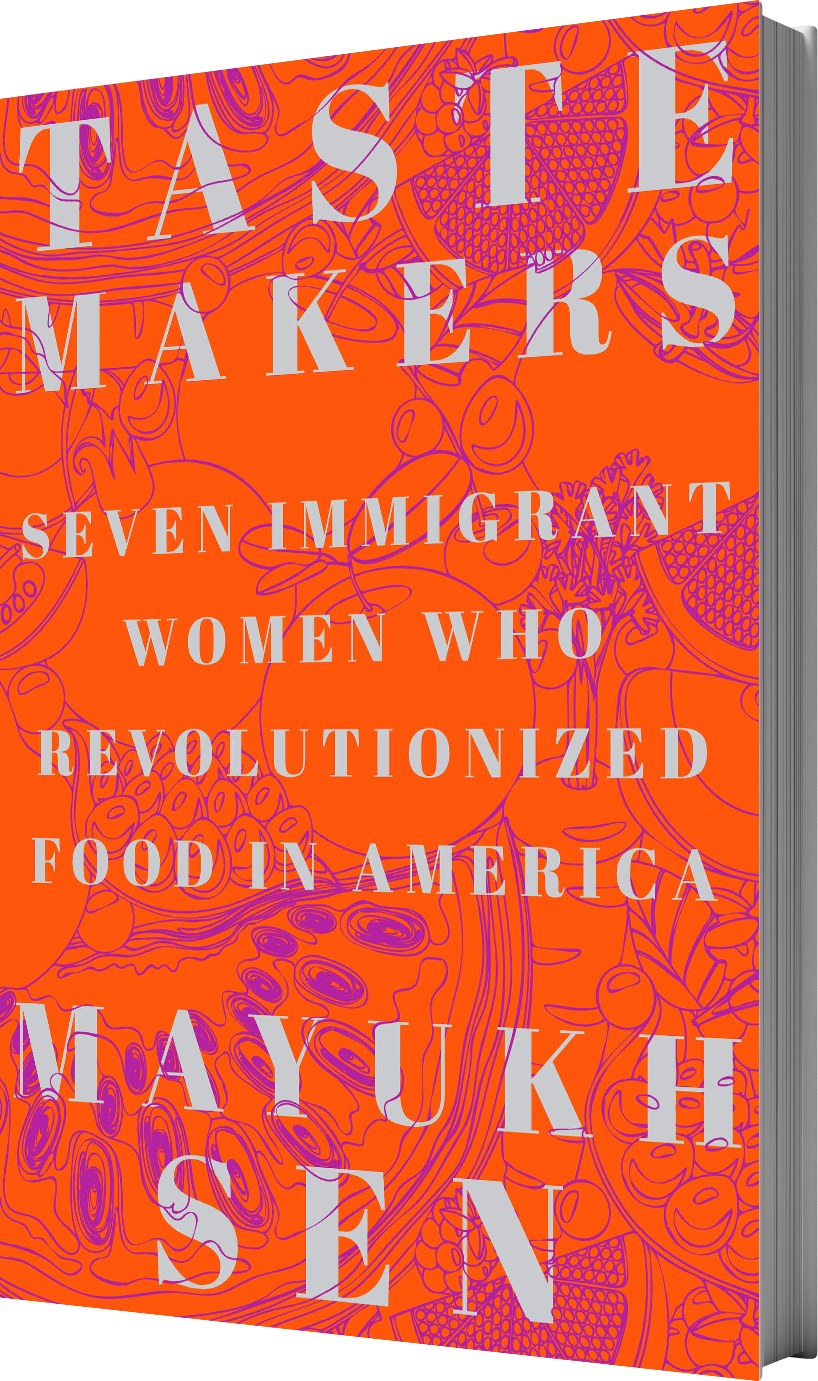 Not that Sen is asking us to see these women as authorial geniuses of their recipes. Sen, in the introduction, notes that in arranging this as a series of short biographies, he wants the reader to see “the shaping of food in America as the endpoint of collective labor, not the work of any one extraordinary mind.” For Sen, this book is a step towards food media documenting the stories of “people outside the food establishment’s orbit,” and that is the “onus of food journalists…to turn a narrative gaze to those on the margins while they are still with us.” One can imagine that in doing the archival work of reading memoirs and newspaper articles, watching videos, and conducting interviews with those who survived—five of the seven women are dead—Sen felt that fear of loss of future history. As much as biography intends to explain, the charm of this book is that it does not pretend to answer all questions.

I hope Sen or others with similar perspectives will answer some of these questions in future writing. What about the labor malpractices, wage theft and other extractive offshoots of an individual’s journey to success in the food industry? Why would an immigrant choose to cook when kitchens are filled with undocumented and precarious staff working to their bones—and would these immigrant bosses perpetuate that, would they exploit their own staff?

What are other complementary and intersecting forces that have shaped the way we eat today—industrial farming, agricultural subsidies, globalization, drought, monocultures, the boom of the restaurant industry, the advent of media and branding—and how can we parse them through life stories of individuals?

How does having access to recipes through quick internet searches versus painstakingly curating cookbooks change the idea of the legacy of a cookbook writer? How do immigrants in the diaspora cook when family memory erodes over time?

I once wrote the recipes of my great-aunt down on paper. I’ve lost those pages since, but I remember the skeleton of the ingredients, because I have cooked and eaten those dishes. Maybe I can recreate them, but I would never presume to own the recipes. I am just a keeper of them. It was simple: the recipes you had were the recipes you were passed down, learned, or made yourself, and that was your food culture. It was a sharing economy. Through this book, I see more than ever the food establishment’s stranglehold on culture. Forget blogs—now there are tastemakers.

Read this Next: Let It Burn 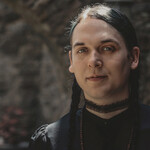 by Stacy Jane Grover
Transgender women are making a home in the professional kitchen by refusing in place.