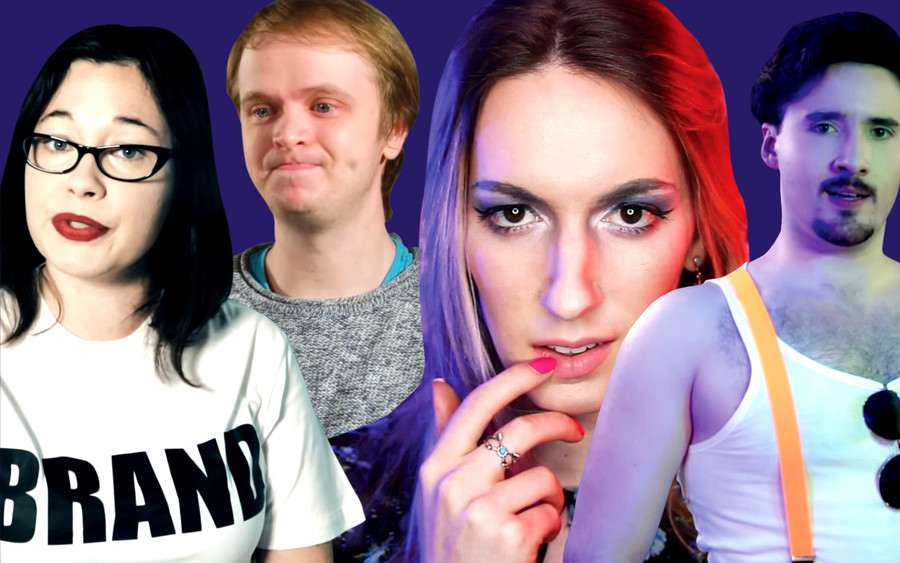 If you have never heard of the term “LeftTube,” you’re not alone. Until recently, this progressive video-making corner of the internet was relatively unknown outside of online leftist circles. The label itself was coined about a year ago on the lefttube subreddit, and the internet still hasn’t been able to agree on a universal definition for the term. In the broadest sense, LeftTube can be described as a loose-knit community of YouTubers who create persuasive videos informed by left-leaning politics. These creators often, but not always, center feminist, anti-racist, anti-capitalist, and queer politics in their analyses, and utilize a scripted video essay format that intersperses talking heads with film and TV clips, news footage, memes, sketches, and the occasional musical number. Despite the popularization of the term by mainstream media outlets like the Guardian and the New York Times, it should be noted that LeftTube is a label used primarily by fans, and many creators have expressed frustration with the haphazard way the term has been applied by journalists.

Though leftist YouTubers garnered hundreds of thousands of views on their videos, they were still relegated to a somewhat-niche corner of the internet, until major news outlets began earnestly covering the growing genre. Natalie Wynn a.k.a. Contrapoints is one of LeftTube’s most recognizable vloggers, with features in the Atlantic and the New Yorker about her focus on deradicalizing far-right online communities. VICE News Tonight even profiled Wynn for a March 2019 segment titled  “Contrapoints Is De-Radicalizing Young, Right-Wing Men.” As of December 2019, she has nearly 800,000 subscribers and her videos on topics like gender dysphoria, Jordan Peterson, and TERFs have been viewed more than 42 million times.

While Wynn is arguably the most visible LeftTuber, she’s not the only leftist YouTuber receiving mainstream attention: Harry Brewis, known as Hbomberguy, made headlines when he hosted a 57 hour Donkey Kong 64 Twitch livestream in January that raised more than $300,000 for Mermaids, a British charity that supports trans and nonbinary youth, and caught the attention of Representative Alexandria Ocasio-Cortez, who called in briefly to express her support for the trans community. In June 2019, several other leftist (or left-ish) YouTubers were highlighted in a New York Times feature about YouTube’s alt-right problem, including Abigail Thorn of PhilosophyTube, Steven Bonnell (Destiny), and Emerican Johnson (Non-Compete).

On a site that has historically struggled to regulate white supremacy, the mere existence (and success) of LeftTube is a positive. For years, self-identified alt-right and far-right creators have leveraged their YouTube channels to radicalize their mostly white and male subscriber bases. Thankfully, leftist YouTubers are using the platform to challenge racism, sexism, and other forms of oppression, which is particularly important when so much of our understanding of systemic oppression is still entrenched in academic elitism, making it inaccessible to the most marginalized communities. Wynn created a video that detailed her reasons for leaving academia and starting a YouTube channel, while Thorn originally started her channel to share her graduate training in philosophy with a more general audience. Similarly, media critic Lindsay Ellis, who has a Master’s of Fine Arts in Film and Television, creates analytical video essays that incorporate a social-justice lens. For instance, her “The Whole Plate” series explores feminist theory, queer theory, marxist philosophy, and film studies through the lens of Michael Bay’s Transformers franchise.

Although LeftTube works toward a social good by strengthening its audience’s understanding of politics and social justice, coverage of the internet phenomenon has exclusively focused on white YouTubers, and people of color have been excluded from the narrative entirely. In her June 2019 video “Why Is LeftTube So White?”, YouTuber Kat Blaque—whose insightful videos cover everything from dating as a trans woman to PewDiePie’s rebranding of white nationalism—critically examines why leftist YouTubers of color haven’t garnered the same level of visibility and success as their white counterparts, though many of them have been creating videos for much longer. After years of being dismissed by white viewers for her perspectives as a Black woman, Blaque comes to the conclusion that many white people still refuse to take people of color’s experiences with racism at face value. In her video, she says, “It’s really hurtful for me to understand that for many white people—they’ll never actually be against racism unless it’s a thing that white people tell them they should be against.” Predictably, some viewers mistook Blaque’s critique for jealousy and implied that her videos are stylistically different (read: inferior) to those created by Wynn, Brewis, and other white leftist YouTubers. In a follow-up Twitter thread, Blaque clarified, “White left tube creators are believed when they express that racism is a thing, while people of color are inherently often seen as too irrational to truly accurately represent something that directly impacts them. THIS WAS NOT A VIDEO ABOUT MY LACK OF SUCCESS ON YOUTUBE. THIS WAS NOT A VIDEO ABOUT WHY I DON’T HAVE MANY SUBSCRIBERS (I have 155k). This is a video about how white people (and really everyone) are seen as authorities about experiences they do not have.”

It isn’t a coincidence that the racial bias that dictates everyday life echoes in YouTube communities and academia. After all, the most well-known academic text about white privilege—Peggy McIntosh’s 1988 essay “White Privilege: Unpacking the Invisible Knapsack”—is written by a white person who studies anti-racism. McIntosh compares whiteness and white privilege to “an invisible weightless knapsack of special provisions, assurances, tools, maps, guides, codebooks, passports, visas, clothes, compass, emergency gear, and blank checks” and lists 46 of the unearned, everyday advantages she experiences simply because she’s white. McIntosh’s foundational essay is still one of the most frequently cited sources for those teaching or discussing white privilege. Even within fields designed to interrogate and challenge systemic oppression, white people’s voices are still prioritized.

Why is "LeftTube" So White?

LeftTube unintentionally perpetuates these same issues, and when I watch Blaque’s video, it’s clear that the conflation of whiteness with authority has weighed on her, as it has weighed on most women of color in leftist YouTube spaces. Years before the rise of so-called LeftTube, men on the site were endlessly abusing, harassing, and threatening women of color like Blaque, Franchesca Ramsey (Chescaleigh), Anita Sarkeesian (Feminist Frequency), and Claudia Boleyn for daring to discuss feminist issues like rape culture and white privilege. Between 2014 and 2016, anti-feminist “takedown” videos with titles like “SJW Cringe Compilation” and “Man DESTROYS feminist with logic,” were an extremely popular and profitable genre that garnered hundreds of thousands (and sometimes millions) of views. White men (and a few white women) made videos that responded to feminist YouTubers who shared their experiences and perspectives about many of the same topics their white peers are praised for today. These so-called “critiques” of feminist talking points nearly always ended in anti-feminist audiences swarming the intended target’s video with mass downvotes, abuse, and threats. It was not unusual for targets with smaller channels and support systems to private their videos or delete their channels entirely. As a woman of color on the site who was frequently targeted by these response videos, I can say that it completely and utterly fucking sucked.

White leftist YouTubers have also faced some harassment. In September, Lindsay Ellis spoke at XOXO Festival, an annual conference in Portland for independent online artists, about her experience being targeted and doxxed by the alt-right. And in November 2019, Wynn left Twitter after she and several of her friends received hoards of harassment, abuse, and threats. It would be disingenuous to pretend that white creators in the community are immune to harassment, particularly those who are targeted for their identities as women and LGBTQ people. However, for creators of color, harassment takes on an additional racialized component, and we often don’t receive the benefit of large community support systems, media attention, and thousands of loyal Patreon backers.

Aside from white leftist YouTubers receiving the most media coverage and having the largest subscriber bases, they also receive disproportionately high financial support from their communities compared to YouTubers of color, and it’s clear that LeftTube audiences are more willing to place monetary value on content by white creators. Many successful YouTubers supplement their income through Patreon, a crowdfunding membership platform that allows subscribers to directly pay their favorite creators. While many content creators keep their Patreon earnings private, and the amount that patrons pledge ranges greatly, white YouTubers like Wynn, Ellis, Brewis, and Thorn have thousands of patrons supporting them financially—ranging from more than 4,000 patrons to nearly 10,000. In contrast, creators of color who make similar content and have been creating YouTube videos for more than a decade, like Blaque and The1Janitor, and newer creators like Angie Speaks, have less than a thousand Patreon patrons offering them financial support.

Years before the rise of so-called LeftTube, men on the site were endlessly abusing, harassing, and threatening women of color.

In August 2019, Blaque created a Twitter thread that succinctly summed up my feelings about LeftTube. She tweeted, “Had it not been for creators like myself and others (mostly women of color who no longer post on the platform), I don’t think you’d have what you call LeftTube. We took the abuse and we are now largely forgotten and that sucks.” In the past year, I have mostly stepped away from YouTube as a platform. There was more than one reason for my departure from the site, but I can’t pretend the constant online abuse wasn’t a major contributing factor. It was exhausting to put so much of myself into a community that often refused to see my own humanity. While I’m elated that leftist YouTube content is rising in popularity and influence, it’s frustrating to watch women of color receive little to no recognition for their work after enduring years of harassment on the site. I don’t fault individual creators like Wynn, Thorn, and Brewis, whose work is smart, creative, and increasingly important in our current political climate, but it’s disheartening that people of color are still devalued in progressive spaces, especially when we’re considering issues that directly impact them.

The next time white YouTubers are held up as bastions of leftist thought and innovation, remember that before there was LeftTube, there were women of color on the site providing essential resources to a community that was largely hostile to us. Remember that we were here before the New York Times features and the VICE profiles and the New Yorker photoshoots. Remember that we were doing the work without the incentives and despite hundreds of thousands of voices telling us not to.

Read this Next: Bad Revenue

by Marina Watanabe
While YouTube proudly displayed a rainbow logo as a symbolic performance of allyship, they doubled down on their decision to let homophobic harassment remain on the platform.