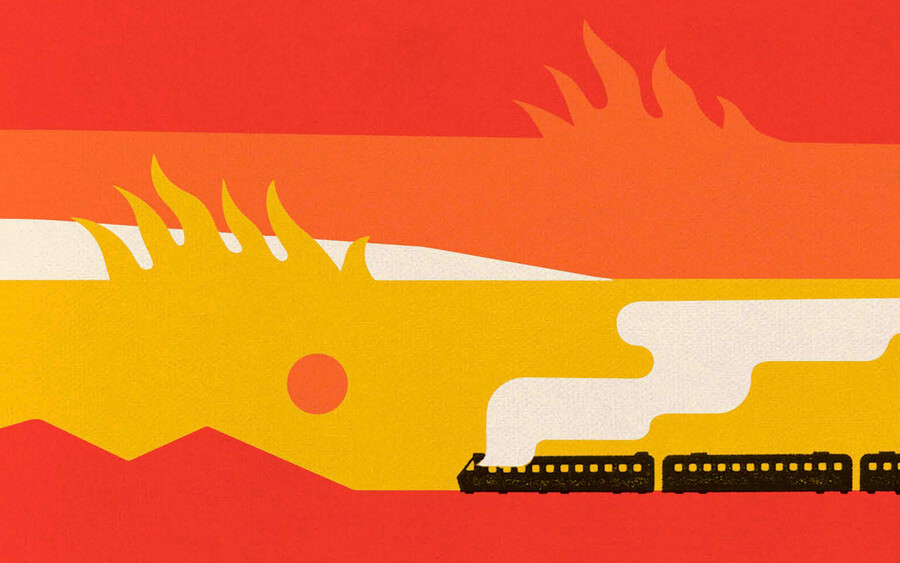 Beginning in December 2019, activists across India, ranging from students to workers to grandmothers, took to the streets to protest the Citizenship Amendment Act (CAA)—legislation that discriminates against Muslim migrants seeking citizenship. The Indian government’s move was one in a series of openly Islamophobic measures, purposefully designed to exclude the country’s largest minority group. Indian fascism is intelligible within a history of Hindu nationalist discourse and the consolidation of power by rightwing political interests. The trends in India are also part of the disturbing rise of fascism around the globe. It’s not hard to imagine why Donald Trump and Narendra Modi get along: Each acts as a mirror, reflecting back their shared authoritarian tendencies to one another.

Megha Majumdar’s incisive debut novel, A Burning, challenges the logic of authoritarianism by showing the kinds of betrayals and violence, both subtle and overt, that it requires to maintain itself. The carefully plotted thriller is set in contemporary Kolkata and follows three protagonists: Jivan, a young Muslim woman accused of participating in a terrorist conspiracy; Lovely, a charismatic aspiring actress from a hijra community; and PT Sir, a gym teacher at a girls’ school who pushes away ethical concerns in service of his political ambitions. Each character is as vividly rendered as they are variously marginalized. As Jivan, Lovely, and PT Sir strive to transcend the confines of their own precarious social positions, their fates become entwined. The novel asks: What does it mean to aspire to a better life in the face of great odds? What are the costs of achieving betterment?

The novel’s title refers to a passenger train set ablaze by unknown assailants. While the attack occurs just prior to the action in the novel, the way that it’s framed as an act of terrorism, who gets blamed for it, and who benefits from the accusations become the driving forces of the narrative. Jivan, who’s passing through the train station on her way home on the night of the violence, is close enough to the conflagration that the scent of smoke lingers on her hair and clothes. Afterward, she processes the tragedy in a familiar way: sharing salient news clips on Facebook. The police, desperate to find someone to blame, settle on Jivan and charge her with terrorist conspiracy. She’s scapegoated for her critical posts about the government, in which she wonders whether the police abetted the horror, and for her identity as a poor Muslim woman.

A “burning” might also refer to the drive to transcend one’s circumstances (its dual meaning works in Bangla too), to push back against the structures that threaten to confine us. For Jivan’s family, structural poverty and rampant Islamophobia translate to inadequate options for housing and a lack of access to good jobs and schools. Nonetheless, Jivan excels at English and sports, but she decides to drop out of school to work and support her parents. Even when she’s imprisoned and awaiting trial, she manages to tell her life story to a reporter who regularly visits her. Though Lovely’s status as hijra (someone who’s third gender) results in ostracization from her birth family, she finds mentorship, solidarity, and comfort in a house with a chosen family of other hijra women. When questioned about why she’s so committed to becoming a professional actress, Lovely reasons, “I have been performing all my life.” Her speech, which Majumdar renders as a lilt in the present continuous tense, belies her past losses and present precariousness.

PT Sir’s lived uncertainty is more ambiguous. He aspires to greater middle-class comforts but is secure in his work as a teacher, which accrues certain benefits. Still, he’s dissatisfied with his circumstances and when he sees an opportunity to become involved in party politics, he takes it in an effort to continue climbing. One day after school, PT Sir (whose real name the reader never learns) decides to wait out a transit delay by going to a political rally taking place across the street. His primary motivation is to catch a glimpse of a Bollywood star who was rumored to be pledging her support at the Jana Kalyan Party rally. (In the novel, this is the fictionalized opposition party in West Bengal.) While this populist party only lives in the pages of the novel, it resembles the real-life Bharatiya Janata Party (BJP), a right-wing Hindu nationalist party that has gone from spewing hatred town-by-town to becoming India’s ruling party.

Majumdar explores the ways that PT Sir is seduced less by the party rhetoric and more by the feeling of power it lends him vis-à-vis his other relationships. Political power across South Asia, and indeed in many parts of the world, operates in part through networks of patronage that control others and their access to resources. A Burning directly showcases this patronage calculus. When PT Sir first encounters Bimala Pal, the party’s second-in-command, she’s quick to use the train attack as political fodder. Condemning Jivan and being seen as tough on terrorism could set the stage for her party’s victory in the upcoming election. PT Sir first insinuates himself into the party because he teaches at Jivan’s former school, but his willingness to do things like provide false testimony against people in court results in increasing personal gain. 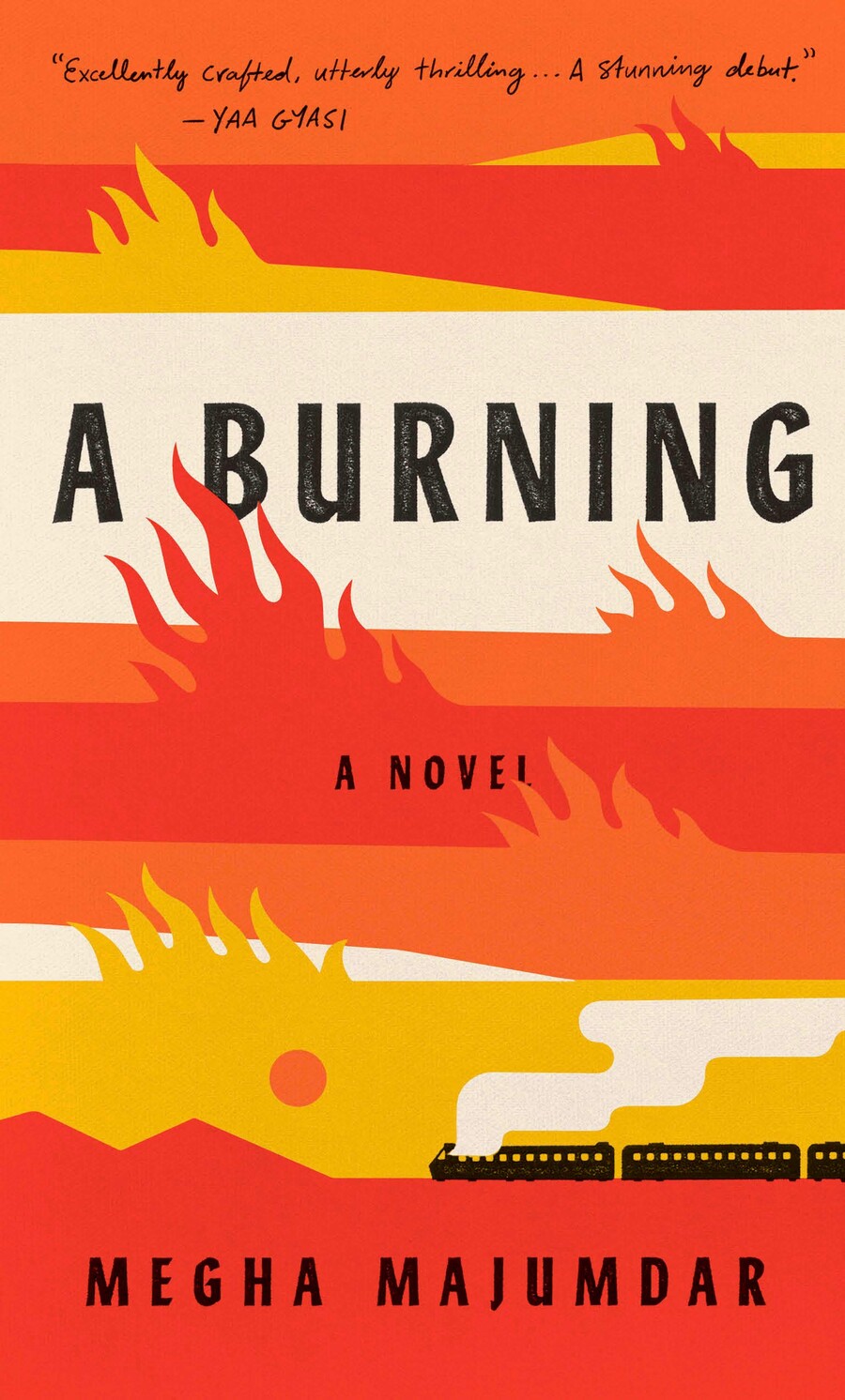 On occasions when he feels ethical misgivings, bland assurances from party leadership quickly convince him to continue on. When he finally accepts responsibility for direct mob violence, PT Sir is shocked to find that the party leadership is untroubled and willing to accept the incident as simply unfortunate. A hunger for power, fame, and stability gnaws at all three protagonists. Each manages their desire for better life circumstances in different ways with varying degrees of success. The reader travels with them into a women’s prison, political rallies for an emergent populist party, an acting class gone viral, and a courtroom where justice is highly circumscribed. The novel works as a literary thriller because of the architecture of its plotting. Majumdar’s narrative choices ensure we get to know the characters and their motivations in a nuanced way.

Her novel is skeptical of sensationalism in politics and the media, and shows how easily it can slip into violence. Majumdar also affords space for the reader to be critical of both wider institutional structures and individual actions that harm others. The tension between structure and agency doesn’t resolve over the course of the novel. Majumdar shows that sentiments and political maneuvering are more complicated than that. An element of chance guides the fates of each of the main characters, for better or worse, but even chance occurrences don’t exist outside of calculations of utility and viability. Jivan and Lovely are easy to root for, the former with her wry competence and the latter with her unbridled enthusiasm, undimmed even in the face of maliciousness and disrespect. PT Sir, by contrast, creates some distance from the reader. He’s an avuncular figure, generally disapproving of others, his masculinity threatened by perceived slights. His star is the fastest to rise in the novel, but at what cost and at whose expense?

By bringing the reader close to these conversations, the novel serves as a powerful indictment against political violence and neglect. The violence of the crowd and the violence of poverty don’t simply happen; they’re created and maintained by the decision-making of those in power. Much ink has been spilled in scholarly tomes analyzing why and how riots begin in South Asia and how the logic of the crowd can turn deadly. While scholars argue about the extent to which rioting is coordinated ahead of time versus how much the collective effervescence of crowd dynamics may incite violence, A Burning shows that it’s not necessarily either/or but more likely both/and. Indeed, “whether they are excited or merely following instructions from party coordinators is hard to tell.” The crowd doesn’t form spontaneously; the men are gathered together into the rally in the first place.

Ultimately, A Burning showcases the hopefulness and striving of its protagonists, despite the odds they face. The narrative challenges any simple notions of freedom or justice, and instead asks: Who is freedom allotted to and why? For whom is justice impossible to achieve within institutional constraints? How are opportunities for some predicated on injustice and unfreedom for others? These are questions that must be asked broadly in this age of political uncertainty. The stakes of building empathy and solidarity are as high as they’ve ever been.

Read this Next: Fighting Chances 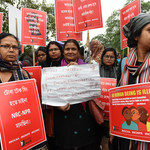 by Padmini Parthasarathy
If a constructed Hindu past is projected onto the future, along with it come caste supremacy and patriarchy. 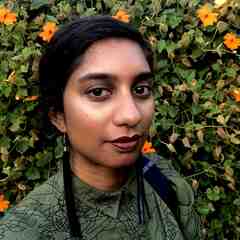 Dilshanie Perera is a writer and researcher living in the Bay Area and tweeting here.