In 1843, Charles Dickens wrote A Christmas Carol as a critique of English poverty and class oppression, especially the appalling treatment of the low-income children he visited in “ragged schools.” However, his condemnation wasn’t limited to England: His visit to America (where he was greeted as a literary hero) inspired him to write a critical treatise titled American Notes. Prefiguring many recent political op-eds, he argued that D.C. politics were poisoned with “[d]espicable trickery at elections; under-handed tamperings with public officers; and cowardly attacks upon opponents, with scurrilous newspapers for shields, and hired pens for daggers.” With respect to American politicians, the BBC wrote, “Dickens concluded that, like everyone else in America, they were motivated by money, not ideals.”

Nonetheless, Dickens had a lasting impact on America, and A Christmas Carol remains one of our most beloved holiday movies. But in a country riven by greed and economic inequality, how do we make sense of America continuing to celebrate A Christmas Carol? What does it mean to have “holiday spirit,” or “Christmas spirit” in particular, with connotations of charity, goodwill, and generosity, a year after electing a modern-day Ebenezer Scrooge? Donald Trump is a caricature of the worst parts of Scrooge prior to the Victorian businessman’s Christmas Eve wake-up call. Trump is so Scrooge-like that he actually once declared, “Part of the beauty of me is that I am very rich.” Trump represents, in every way imaginable, the excess, hubris, and monstrosity of late American capitalism and mind-boggling material abundance on the backs of the exploited worker.

Despite his hollow overtures to poor and working-class white people, he’s a charlatan, a bully, and a braggart—even when it comes to committing sexual assault. Meanwhile, white evangelical Christians—the group most vocal and sanctimonious about their claims to “family values” and the nation’s alleged Christian heritage—continue to rally behind him, ignoring the warnings of their own religion, such as Matthew, chapter seven, verses 15 through 20: “Beware of false prophets, which come to you in sheep’s clothing, but inwardly they are ravening wolves … by their fruits ye shall know them.” 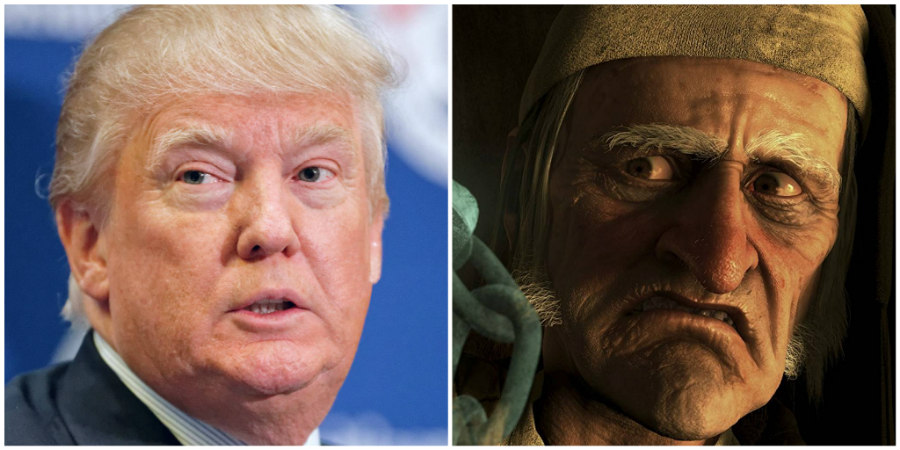 Trump supporter Mark Lee even recently told CNN, “[I]f Jesus Christ gets down off the cross and told me, ‘Trump is with Russia,’ I would tell Him, ‘Hold on a second, I need to check with the president [to see] if it’s true.’”

Many people voted for Trump apparently because they thought he would embody the Christmas-morning vision of Scrooge, the Scrooge that emerges victorious from the dark night after grappling with the stark messages carried by the Ghost of Christmas Yet to Come. These voters, so the narrative goes, thought that somehow trickle-down economics would actually work this time: Trump would show up to the homes of all the Cratchit families with the prized turkey and he would use his (inherited and ill-begotten) power to bestow feasting and good fortune. Many pundits continued spinning the optimistic yarn well into 2017 about Trump’s bellicose and hateful campaign persona eventually transforming into the president that politicians who curry his favor still pretend he can be.

But Trump hasn’t grappled with the messages of any ghosts. Not the ghosts of the past, nor the present, and certainly not the future. In a way, comparing Trump to Scrooge is too kind. A Christmas Carol is a classic for Americans because of Scrooge’s ability to transform and realize the true spirit of Christmas before his life and the lives of his employees are wasted. He is a reformed businessman, the soft side of capitalism that our culture continues to cling to at our own expense. Trump, on the other hand, lacks a conscience; he is what Scrooge would be if, instead of repenting for his wrongdoing, he mocked Tiny Tim’s disability, sexually assaulted Mrs. Cratchit, and defended racist mob violence.

Perhaps the most illuminating part of the American obsession with A Christmas Carol is how as a culture, we continue to hold out hope that the institution of capitalism can be channeled as a force for good. What Dickens envisioned as a reformist economic critique, Americans took up as a self-soothing tale about the power of Christmas to right moral wrongs. After all, as a society steeped in the national virtues of rugged individualism, the protestant work ethic, and the American dream, it’s more convenient to focus on a happy ending rather than on the hard truths about inequality, greed, and power that drive Dickens’s message—and our nation. In 2017, it’s too late for such naivety. After all, America is looking pretty darn Dickensian. “The top 20 percent of US households own more than 84 percent of the wealth, and the bottom 40 percent combine for a paltry 0.3 percent,” Nicholas Fitz wrote in Scientific American in 2015. “The Walton family, for example, has more wealth than 42 percent of American families combined.”

“We may not want to believe it,” Fitz continued, “but the United States is now the most unequal of all Western nations. To make matters worse, America has considerably less social mobility than Canada and Europe.”

A major reason for this lack of social mobility is the fact that politicians ruthlessly skewer the poor and downtrodden. Republicans are in the midst of bludgeoning every real-life Cratchit family with their one percent-giveaway tax bill; hastening the death of Tiny Tims with their ongoing attempt to repeal the Affordable Care Act; and marshaling on with their signature attacks on unions, poor and working-class students, basic social services, and educational help for kids with disabilities. And they do all this while claiming to be “Christian” and, I’m sure, enjoying A Christmas Carol with their kids and listening to carols about peace on earth and goodwill to men.

Although there’s numerous reboots of A Christmas Carol, from cartoons to muppets, we have failed to internalize Dickens’s central critique. It’s time to recognize that a reformed Scrooge is the exception to the rule; the solution to our corrupt society is not more corruption; and that Christmas cheer is a sham as long as we fail to ameliorate the mass suffering amplified under the Trump regime. Let us look to A Christmas Carol not as a model of justifying the economic status quo, but as a parable that encourages us to radically re-assess capitalism. Let’s embrace Dickens’s vision and work toward a truly just economic system that doesn’t leave America’s poor at the mercy of a powerful boss’s conscience. If we’re going to reverse course, as the Ghost of Christmas Yet to Come portends is still possible, we need to lift up the most marginalized among us, in service of a miracle.

Relevant: "Carol" is the Lesbian-Centric Christmas Movie of My Dreams 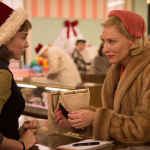 by Grace Manger
I’m prepared to argue for Carol being added to our family holiday tradition, effective immediately.