Thanks To Sexism, We Still Need “A League of Their Own” 25 Years Later | Bitch Media

Screenbaseballsportsturning 25a league of their own

Thanks To Sexism, We Still Need “A League of Their Own” 25 Years Later 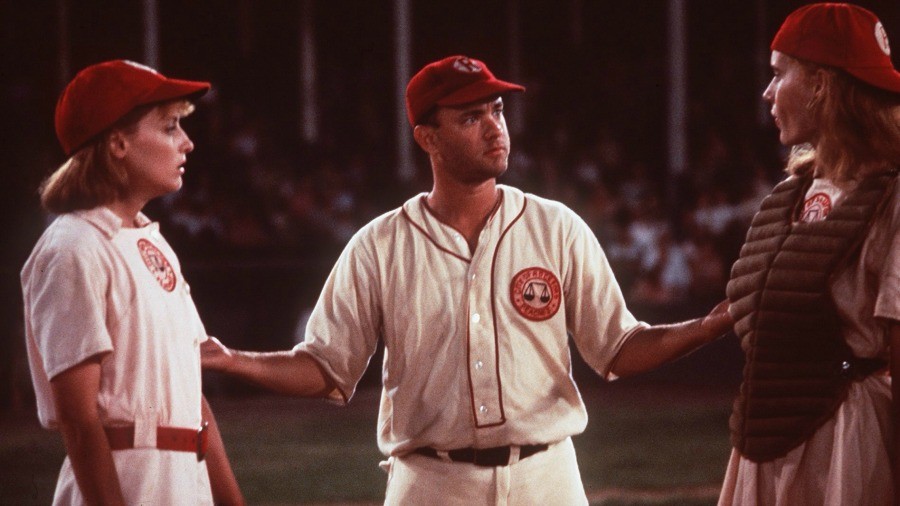 “Girls can’t play ball!” a man yells, as he stands on top of the dugout to mock the women playing in the All-American Girls Professional Baseball League (AAGPBL).  To shut the man up, Ellen Sue (Freddie Simpson) fires a ball that pegs him right in the shoulder, knocking him down. A League of Their Own tells a fictionalized version of the real-life women’s professional baseball league that sprung up in 1943, when most American men were in Europe fighting World War II. Even now, the significance of the film comes through: It’s directed by a woman (Penny Marshall), stars women (Geena Davis, Lori Petty, Rosie O’Donnell, and Madonna), and shows women playing baseball because they love it—and are very good at it. Yet, 25 years after the movie premiered, women in baseball are still experiencing the sexism portrayed in the film.

Many girls grow up as the “only one” on all-boys teams. As Doris (Rosie O’Donnell), says at one point during the film, “[People] always made me feel like I was a weird girl…or not even a girl, just because I could play. I believed them, too, but not anymore. I mean, lookit, there’s a lot of us.”  A League of Our Own validated female athletes who have fought stereotypes their entire careers, and at the end of the film, the women ballplayers have earned the respect they deserve: The movie closes with them being inducted into the Baseball Hall of Fame. However, even within the league itself, women endured sexism and discrimination. AAGPBL players signed strict contracts that forced them to refrain from drinking, smoking, or fraternizing with other teams. They had to attend “charm school,” and wear makeup, skirts, and dresses—even when playing ball—because “they were selling both baseball and femininity.” As Lyndsey D’Arcangelo notes in Curve Magazine, these policies were also enacted to prevent players from being perceived as lesbians, although many of them were. 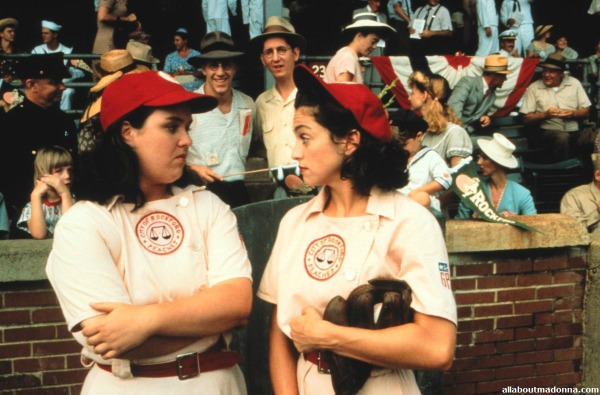 Women in baseball have not fared all that well since the AAGPBL ended in 1954. Once men returned from World War II, women were encouraged to return to more “traditional” domestic roles, and women’s professional baseball was stagnant—until the release of A League of Their Own. In the 1990’s, there were some attempts to form all-women’s teams: For example, the Colorado Silver Bullets traveled the country playing men’s collegiate, semi-pro, and minor league teams, but the resurgence was short-lived. It wasn’t always this way; girls were initially included in America’s pastime and have been playing the sport at amateur levels since its inception.

Yet, when baseball became a professional sport, it was marketed toward white American men as a deliberate effort to exclude women and girls from the game. Part of that plan involved distinguishing softball—designed to be easy enough for girls to play without being too physical or competitive—from baseball in the late 1800s, as the sport was being professionalized. Since then, women have mostly been relegated to softball, which is a great sport in its own right, but isn’t wholly comparable to baseball because its rules are so different. Now though, girls are fighting to reclaim their space in baseball.

Sports journalist Jessica Luther recently wrote about Girls Travel Baseball, an all-girls baseball team that was started almost four years ago by two dads with daughters who wanted to play. GTB competes against boys teams, and are often met with sexism. The coaches had to submit their roster with just the girls first initials and last name, after three teams dropped out of tournaments because of the gender of their opponents. Sometimes grown men stand on the side of the field and mock the players, a real-life version of the man on the dugout in A League of Their Own. 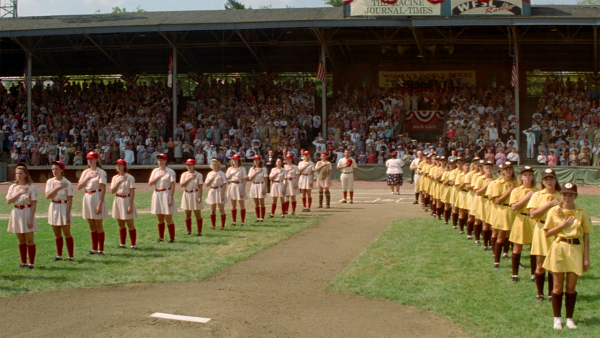 Still, in many ways, we’re on the precipice of a new dawn for women in baseball. Mo’ne Davis was the breakout star of the 2014 Little League World Series, becoming the first girl to throw a shutout game in the tournament’s history. In 2016, the Sonoma Stompers, an independent league team, became the first men’s professional baseball team to draft multiple women—three in total. This season, pitcher Stacy Piagno collected her first win with the team, making her just the third woman to get a win in men’s professional baseball since the 1950’s. The others were Ila Borders, in 1998, and Eri Yoshida, in 2011.

Yet, A League of Their Own’s anniversary highlights a pretty striking trend: Professional baseball teams are much more willing to celebrate the anniversary of a movie about fictional women players than the actual women of the AAGPBL. Many professional teams, including the Boston Red Sox and the Miami Marlins, have held events to honor the film. The Red Sox are hosting a screening of the film, and will have a meet and greet with former AAGPBL players Maybelle Blair (the real-life All the Way Mae, played by Madonna in the film) and Shirley Burkovich. During their commemorative night, the Marlins let Lori Petty throw out the first pitch, and fans signed up to meet “Kit Keller.”

But when it comes to celebrating the actual historical figures, Major League Baseball comes up short. It’s easier to focus on actresses who aren’t “real” baseball players (though many cast members told espnW they learned how to play for the film, and shot the baseball scenes), than to acknowledge the accomplishments of female baseball players. It’s also rare for AAGPBL players to be honored at an event that’s not explicitly about women, relegating women to the sidelines, as baseball has attempted to do since the early days when executive Albert G. Spalding famously espoused that a woman’s place was in the stands, deeming the sport “too strenuous for womankind” (though it’s worth noting that baseball still struggles to acknowledge that women exist as fans, too). 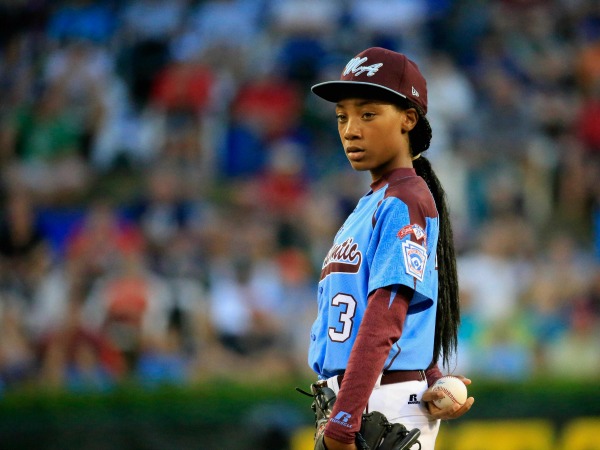 Even rarer still is the lack of acknowledgment of Black women in the game, though the first professional women’s baseball team in the country was the all-Black Dolly Vardens in the 1880s. A League of Their Own never outright addresses the fact that Black women were forbidden from playing in the league. The film alludes to it with a singular scene: A Black woman walks onto the field, picks up a baseball, and fires it to Ellen Sue, who is standing much further away than the closest catcher, Dottie (Geena Davis). After the throw, the woman simply looks at Dottie and nods, before walking away. The Black woman with the cannon for an arm in the film was supposedly modeled after Mamie “Peanut” Johnson, who showed up to AAGPBL tryouts but was told to leave because she was Black.

Johnson went on to play in the Negro Leagues alongside two other women of color, Toni Stone and Connie Morgan. If it’s rare for professional teams to honor the players of the AAGPBL, it’s almost unheard of for them to honor the women who played in the Negro Leagues, mostly because women are still not seen as legitimate ballplayers. They’re women ballplayers—a distinction male players won’t let them forget. In 2016, Toronto Blue Jays manager John Gibbons said that a new slide rule designed to reduce injuries was turning the game into “a joke,” and suggested that his team should play “in dresses” as a result. It wasn’t until the 2017 season when the MLB banned the practice of rookie players being hazed by being forced to dress up in AAGPBL uniforms. Hell, just this week, the Scranton/Wilkes-Barre RailRiders, AAA affiliate of the New York Yankees, hosted “Princess and Pirate Night,” which involved them turning the opposing team’s headshots into Disney princesses as a “joke.”

Until professional baseball gets comfortable acknowledging and actively promoting the women who have played baseball in the past, it will be impossible to get to a point where they are equally included in the game. As Jennifer Ring writes in her book, Stolen Bases: Why American Girls Don’t Play Baseball, “if baseball is the national pastime, the implication is that women are not part of the nation.” Girls and women can and do play ball and they deserve to be recognized for it, but  unfortunately, 25 years is not long enough to undo over a century’s worth of discrimination.