A STAR IS BORN - Official Trailer 1

Bradley Cooper’s remake of A Star Is Born is a genuine marvel that believably sells the love story of country singer Jackson Maine (Bradley Cooper) and aspiring songwriter Ally (Lady Gaga) and the disintegration of their relationship as her fame eclipses his. Both actors give fully realized performances and have a crackling chemistry that propels the film’s plot and establishes legitimate emotional stakes. But the movie’s biggest misstep is its continued insistence that Ally’s turn toward pop music is a waste of her talent and skill. Star’s disdain for commercial art feels retrograde and condescending, and undermines what could’ve been a focused examination of the dynamics within a creative and romantic partnership.

When Lady Gaga first burst onto the scene in 2008 with her anthemic debut single “Just Dance,” reviews positioned her electro-pop club music as endlessly fun but ultimately devoid of any real lyrical substance—criticisms previously leveled at Britney Spears, Christina Aguilera, Jessica Simpson, and Mandy Moore in the late 1990s and early 2000s. Described by The Guardian as a gleeful celebration of “the most vapid and ephemeral aspects of celebrity,” “Just Dance” and The Fame, the album that spawned it, earned Gaga five Grammy nominations and a Rolling Stone designation as one of the “100 Greatest Debut Albums of All Time.”

Her subsequent albums dispensed with much of the incandescent rave-synth sound that made her famous, inching closer and closer to “real music.” But It wasn’t until 2016’s Joanne that Lady Gaga turned squarely toward the aesthetics of Americana, her soft pink cowboy hat featured prominently in the album’s promotional imagery. The perceived decline of her fame followed her career arc away from the frothy dance music her fans knew and loved. So it’s ironic that Lady Gaga makes her feature-film debut playing a songwriter and artist whose career plays out in reverse yet is subjected to the same criticisms.

In Ally, Gaga finds a counterpart who can cement her own chops as a serious, legitimate actor even as the film disdains the character’s adoption of the very kind of artistic persona that made her famous in the first place. Jackson’s perception of the music Ally makes after she becomes a pop-music star is a sexist designation that’s rarely applied to men who make the same commercial turn (La La Land excepted). What Jackson comes to describe as Ally’s artistic insincerity is very nakedly the nascent bloom of his own jealousy: Her musical versatility brings her the mainstream success he never dared to aspire to. His disdain is less about Ally’s music ceasing to be “real,” and more about the unbridgeable gulf it creates between them.

The movie’s implication that Ally abandons her roots are clearly unfounded: As her star ascends, she continues writing her own music and includes pre-fame country ballads in her pop music sets. There’s no reason to presume that she herself is unhappy with her burgeoning career or feels she’s compromised her potential—except, of course, for her gender. Were she a male artist, Ally’s ability to deftly move between genres would be considered a testament to her immense skill. Here, it’s a telltale sign that she’s a sellout. A Star is Born barely acknowledges that Ally’s move to pop music symbolizes Jackson’s loss of control over her newfound world of celebrity and fame.

When she was simply his unknown discovery, she performed on his terms, at his shows, with his band, singing arrangements that he created and approved. As a musical entity in her own right, she has her own schedule, priorities, and music. Jackson sees Ally as a salve for his own issues, including alcoholism, drug addiction, and a childhood injury that’s costing him his hearing. But once her career no longer revolves around him, he’s forced to deal with his own self-loathing and contempt. But it’s much easier to punish her for abandoning him than it is to admit that he has significant emotional issues. 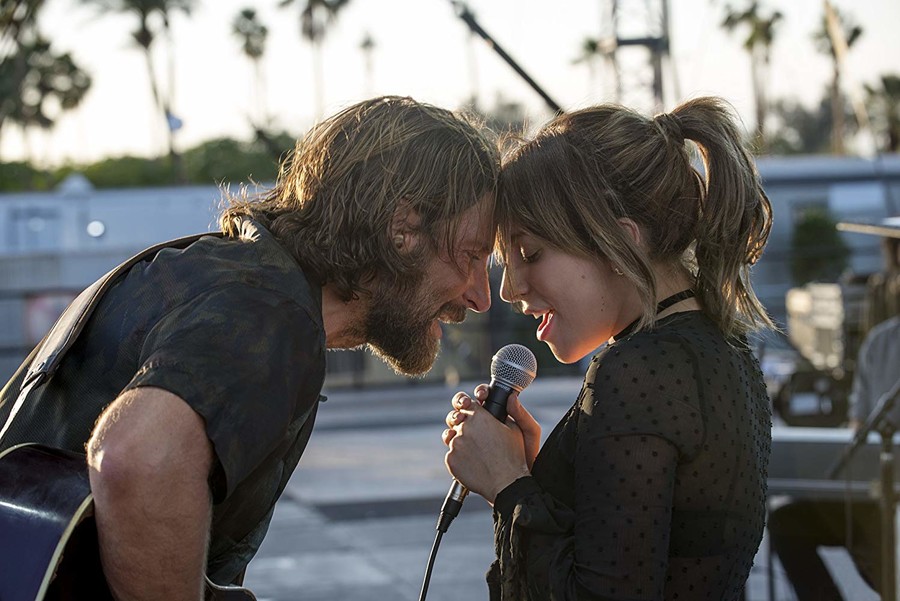 Bradley Cooper as Jackson Maine and Lady Gaga as Ally in A Star is Born (Photo credit: Warner Bros. Entertainment)

It’s telling, then, that at every point of forward motion in Ally’s career, Jackson acts like a petulant child whose toys have been confiscated. As Ally notches achievement after achievement, his addictions reemerge with terrifying frequency. When she tells him about her new recording contract, he smears a pastry on her face in defiance. At the recording of her first Saturday Night Live performance, he questions the value of her lyrics. And when she wins her first award, he embarasses her onstage and nearly derails her career. The film presents Jackson’s retaliative tantrums and the continued friction between them as a necessary reminder that Ally is squandering her talent, but it’s actually about Jackson’s realization that she no longer needs him. His actions are a desperate attempt to keep her small and manageable where he can still relate to her.

The film’s final sequence cements this skewed perception of pop music’s relevance. After a tragic death, Ally performs a song Jackson wrote for her at a benefit concert. Her shocking-orange pop-star tresses are gone, replaced by her original chestnut brown, and she performs the song as a sweeping and theatrical ballad, finally back to the “true” artistic form Jackson prized. Gaga’s powerhouse vocals are on full display as she belts the movie’s final number. While the scene itself is dramatically moving, it reinforces the idea that Ally’s pop-star persona was an inauthentic misstep, and subtly suggests that it took this calamity for her to come to her senses. Jackson’s actions cement his legacy while calling Ally’s into question: If only she had come back to herself sooner, the film suggests, tragedy could’ve been avoided.

A Star Is Born is a fantastic film with a stellar soundtrack and even better performances, and will undoubtedly dominate awards season. But the film’s contempt for pop music, an art form that’s long been disrespected because of its target audience of young women, is disappointing in an age when the biggest celebrities in the world are women making dynamic, effervescent music you can still shake your ass to.

“Practical Magic” Travels Through the Realm of Outsiders

Whiteness as a Weapon