Inaccessibility at the Polls is Part of Voter Suppression | Bitch Media

Stay in LineInaccessibility at the Polls is Part of Voter Suppression 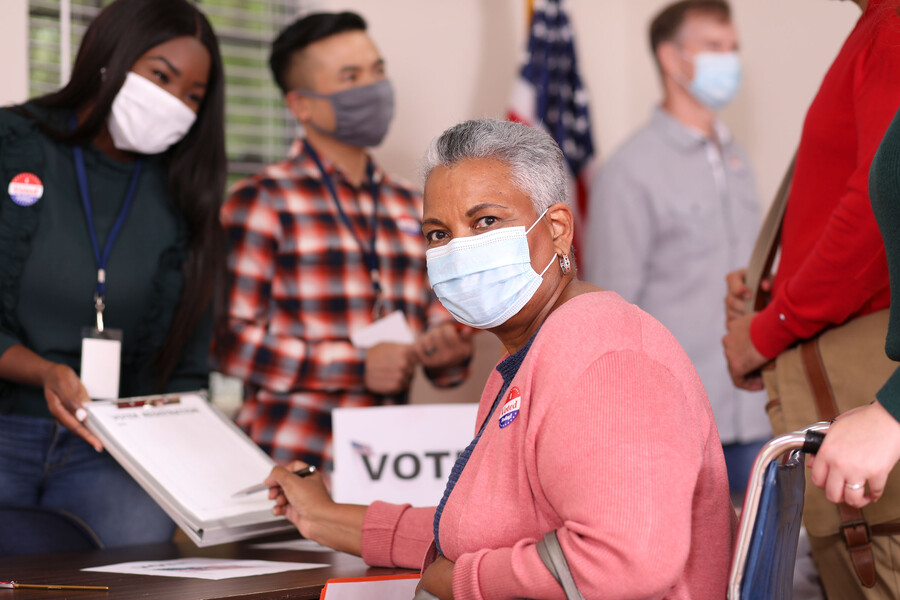 I cast my vote in the 2016 presidential election early, along with 57.2 million other voters. It was my first time doing so. Thirty percent of my fellow early voters made the choice for the same reason I did—because they have a disability. As a person with Ehlers-Danlos syndrome who sometimes uses a cane and experiences pain and exhaustion when standing for long periods, I wasn’t sure how long I could physically stand in line. I think back to that experience every time a politician, organizer, celebrity, or activist urges voters to “stay in line” on Election Day. The phrase is meant to be encouraging in its reminder that every vote counts, and that everyone in line at polling places has the right to vote even if their polling place closes while they wait. But the reality is that for many disabled people, there are significant access barriers to voting. It’s not as simple as staying in line.

Inaccessibility at the polls has long been a major issue, and it’s one that directly suppresses the votes of disabled people. Accessible polling locations were not even legally required until the Voting Rights Act of 1965, which required that election officials allow a blind or visually impaired voter to be assisted with voting. Later, the Voting Accessibility for the Elderly and Handicapped Act of 1984 would require accessible polling places during federal elections. When I voted early at my city hall this year, I noticed that COVID-related precautionary procedures urged people to take the stairs, rather than the elevator, in order to vote. There were no signs or directions indicating that voters who were unable to use the stairs could take the elevator. My experience underscores the need for access to be the norm, not the exception. Accessible polling places are required by law, according to a 2017 study from Rutgers University, one in three disabled voters still face access barriers to voting. Less than 20 percent of polling places were fully accessible to disabled voters during the 2016 presidential election.

This year, of course, barriers to access don’t just affect people with disabilities: Voting in crowded public spaces during a pandemic is a concern for everyone. crowded public space, therefore increasing their chances of getting COVID-19. Many of those who opted to vote early in 2020 resigned themselves to waiting in line for up to 11 hours just to cast their votes. For disabled people, standing in line for even one hour, never mind 11, prompts questions of why, even in non-pandemic times, voting isn’t easier. Why don’t polling places provide chairs? Why aren’t there more polling places in every city and town so that no one has to wait in long lines? Why should disabled people have to choose between their ballots and their health?

Mail-in ballots for the 2020 election were supposed to mitigate the risks of voting, and waiting, in close quarters. But many people who requested mail-in ballots never received them—another access issue that has a direct impact on disabled and high-risk people. I signed up to vote by mail in a Massachusetts state election earlier this year and never received my ballot, though my wife—who lives at the same address—received hers. I voted early in the presidential election because I didn’t want to risk having another requested ballot fail to arrive. Had I waited until Election Day to vote, I would have faced two-hour lines at my polling place, and might have ended up leaving without voting, or staying in line but having to take the next day off work to recover. How many disabled people were in the same similar position this year, choosing to vote by mail to ensure both accessibility and safety only to have to decide whether they could make it to a polling place? How many of them had to abandon the long lines because they couldn’t stand any longer or because they were worried about catching coronavirus and experiencing the severe complications that so often come with it?

You all are talking about the mail-in ballots all wrong:

What swings this election will be disabled and chronically ill people.

Why do you think they mailed in their ballots during a pandemic?

Too, the public conversation about counting mail-in votes is also ableist and reeks of voter suppression. In the 2020 primary election, 50.3 percent of votes were cast absentee or by mail, with some states choosing to automatically mail ballots to all registered voters. Many who typically vote in person chose to vote by mail to protect their own health and those of high-risk loved ones. A complete count of ballots that includes early and mail-in votes is an important part of democracy—one that ensures all disabled voter’s votes are counted—but the media has often crafted a narrative that mail ballots “complicate” the presidential election and elected officials, including Donald Trump, have claimed fraud and demanded that no ballots be counted after Election Day.

Disability activist, journalist, and public speaker Imani Barbarin started the Twitter hashtag #CountDisabledPeoplesVotes in response to this discussion, offering the important reminder that not counting mail-in votes means not counting the votes of many disabled and high-risk people. Asking for mail-in votes to stop being counted is voter suppression that disproportionately impacts disabled and high-risk voters, and other voters who might have difficulty getting to a polling place.

Disabled people are all too familiar how accessibility is compromised by our society’s obsession with physical perseverance.

Disabled people are all too familiar how accessibility is compromised by our society’s obsession with physical perseverance. We perpetuate the idea that any kind of organizing that isn’t done in person is just “slacktivism,” we hailed Supreme Court Justice Ruth Bader Ginsburg for working even while she was in the hospital, we use the narrative of Joe Biden “overcoming” his stutter as evidence of his goodness. Rather than prioritizing accessibility for all, we use calls to “stay in line” as evidence that all success requires is patience and grit.

Rather than making certain that anyone who wants to vote by mail has that option, we celebrate the patriotic heroism of those who drive 2,000 miles to vote because they never received their absentee ballot. That’s not perseverance; it’s voter suppression. And we have to fight against it—not just for this election, but for all those still to come.