Being Ableist toward Donald Trump Only Hurts Disabled People 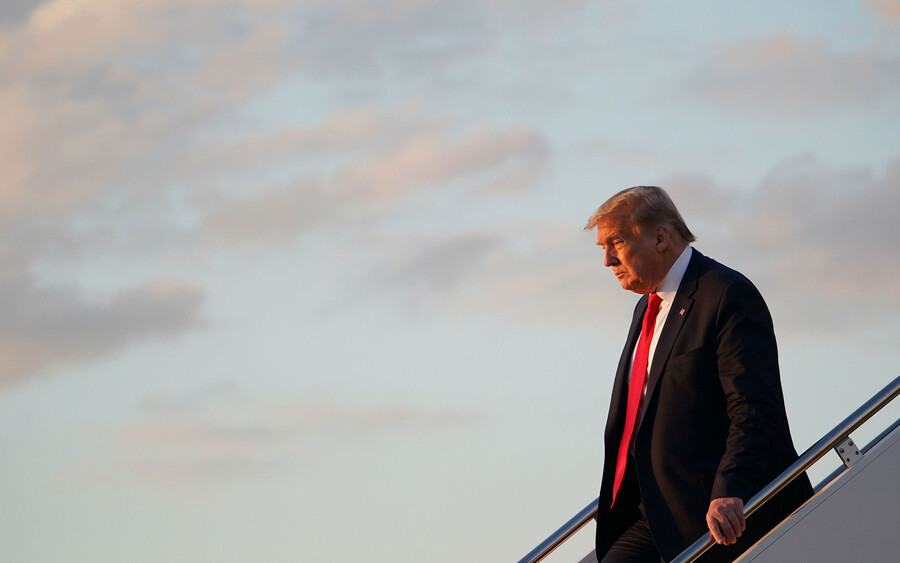 U.S. President Donald Trump steps off Air Force One upon return to Andrews Air Force Base in Maryland on May 30, 2020. (MANDEL NGAN/AFP via Getty Images)

When Donald Trump addressed West Point’s graduating class on June 13, there was plenty for political journalists and commentators to discuss, including the hypocrisy in his statements about race; his decision to bring 1,000 graduating cadets back to West Point (and force them to quarantine for two weeks in order for him to make the speech); and the fact that he defied the Centers for Disease Control and Prevention’s guidelines for large gatherings during the pandemic. Instead, all eyes turned toward Trump’s health, prompted namely by him using two hands, rather than one, to hold his glass of water and his gait as he walked down a ramp and exited the stage. After Trump’s speech, Twitter flooded with tweets labeled #TrumpIsNotWell, #RampGate, and #TRUMPstroke.

The discourse surrounding his speech quickly devolved into saturated ableist commentary about the president’s health, one with implications far broader than his immediate condition. We’ve seen this playbook used time and again: We saw it when Hillary Clinton fainted in 2016 as she battled pneumonia; we saw it when Bernie Sanders had a heart attack in 2019; and we see it in current conversations about Joe Biden’s stutter. Ableism, it seems, is bipartisan. Those on the left are just as quick to seize upon the whisper of a health condition, to make comedy of it, to turn to malice, and to do so seemingly without regard for the millions of sick and disabled people who are watching, knowing exactly what those comments mean for their own lives and how they’re perceived.

I have endometriosis, a chronic reproductive-health condition that can cause acute chronic pain, organ dysfunction, and infertility. The last four years of my life have been completely consumed by this disease; I’ve been housebound at times, unable to stand for more than a few minutes, prescribed treatments that made me sick, and recovered from surgeries where I needed help doing basic things like showering and getting out of bed. I also graduated from a top law school. I landed my dream job at a renowned publication. I worked at the American Civil Liberties Union; I wrote articles about everything from the ways we dismiss female pain to what male candidates wear to presidential debates, and I’ve even landed a literary agent. I accomplished all of this in spite of my illness because physical health is not an indicator of competence.

Frankly, I shouldn’t have to list my credentials to prove that I’m competent, but every time a politician stumbles, stutters, or misspeaks, we seemingly return to that toxic notion that to be ill is to be less than, to be less capable and less worthy of a job or respect. And the droves of people online who are mocking Trump’s health are weaponizing this belief—even if they’re doing it to ridicule the fascist bigot in the White House. They’re making it clear to their disabled and chronically ill peers that their health is fair game as well. This also plays into the dangerous and inaccurate belief that someone’s physical health can be gleaned from looking at them; in actuality, how Trump holds a glass or walks down a ramp says nil about his actual health. Endometriosis is an invisible illness; at my absolute sickest, those close to me could see it—my face changed from the meds, they could see the pain in my eyes, and the exhaustion in my expressions.

But to anyone who didn’t know me, I’ve always looked able-bodied. And I’ve always had a gnawing fear that those who I needed to believe me—my doctors, my professors —would decide that the way I looked meant I wasn’t deserving of care or accommodation. And while fashion can be a salve for people living with illness or disability, that very comfort can be used to our detriment—as evidence that we’re simply not as sick as we say. This idea that the way someone looks translates into a diagnosis is treacherous for a number of reasons; anyone who’s sick or disabled who has been told “but you look great!” knows what I’m talking about. The physical appearance of disabled and chronically ill people has been used by providers to downplay their illnesses—it’s a form of gaslighting and it’s especially fraught for Black women, women of color, and other marginalized people, who statistically suffer the most thanks to outdated and virulently racist notions about the way Black people experience pain and a medical system built on unethical medical experiments on Black people against their will.

That’s the principle reason these armchair diagnoses are so problematic; I don’t know a single decent provider who would diagnose someone based on a three-second clip, and I don’t know any decent provider who would be reckless enough to then broadcast that opinion for millions of viewers and readers to see. This practice is particularly vile because it provides an expert validation of the toxic practices we already see lay people employing: diagnosing someone based on what you can see about them and without any input or narrative from their own experience, and then using someone’s health to discredit their worth and competence. It’s also a grotesque invasion of privacy; of course our political leaders are held to a level of transparency others are not, but this idea that one’s health is fodder for catchy chyrons and viral tweets feels invasive and again translates to a horrible precedence for those of us living outside the public eye who are still impacted by ableism.

Every time a politician stumbles, stutters, or misspeaks, we seemingly return to that toxic notion that to be ill is to be less than.

I can hear the retorts to this piece: “What matters is not if he’s sick, but if he’s lying about it.” But that’s actually an ableist idea as well. The idea that sick people lie about their illnesses, or that people who are well lie about being sick, are both often weaponized against sick or disabled people. Every sick or disabled person I know has, at one point in their life, been called a liar—been told they were being dishonest about their disease for attention, or out of weakness, or as a form of manipulation. It’s an abusive and dangerous practice that can prove deadly for Black women and other marginalized people. Beyond that, the assumption that Trump is lying about his health fails to appreciate what it’s like to actually live in a sick or disabled body.

For us, lying is sometimes a form of survival; we perform physical competence as a way to feign normalcy not to deceive anyone but to protect ourselves from an ableist world that deigns to decide someone’s value based on their physical acuity. There were plenty of times I exaggerated (lied about) how well I was doing to professors or administrators at school because I was scared the truth would be used against me. Sometimes, as chronically ill or disabled people, being honest about our health means relinquishing the right to define what we’re capable of.

But maybe if we lived in a world where people didn’t take every opportunity to dissect someone’s health as a way to discredit their competence this wouldn’t be necessary. And therein lies the issue with this discourse surrounding Trump’s health, and the root of why questioning and disbelieving even a man as reprehensible as Trump does more harm than any remote good. What exists as a fleeting news cycle for some, leaves a lasting impression on those of us living with illness or disabilities. It triggers us and makes us fearful to engage people honestly about our lives; it’s a cruel reminder of what people actually think about us, and it puts our lives at risk. Dunking on Trump shouldn’t come at our expense.

Read this Next: 22 Hours of Hate 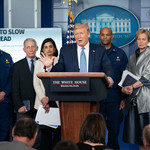 by s.e. smith
There is a sense, watching the briefings, of sliding off a precipice into uncharted waters together with the rest of the nation.