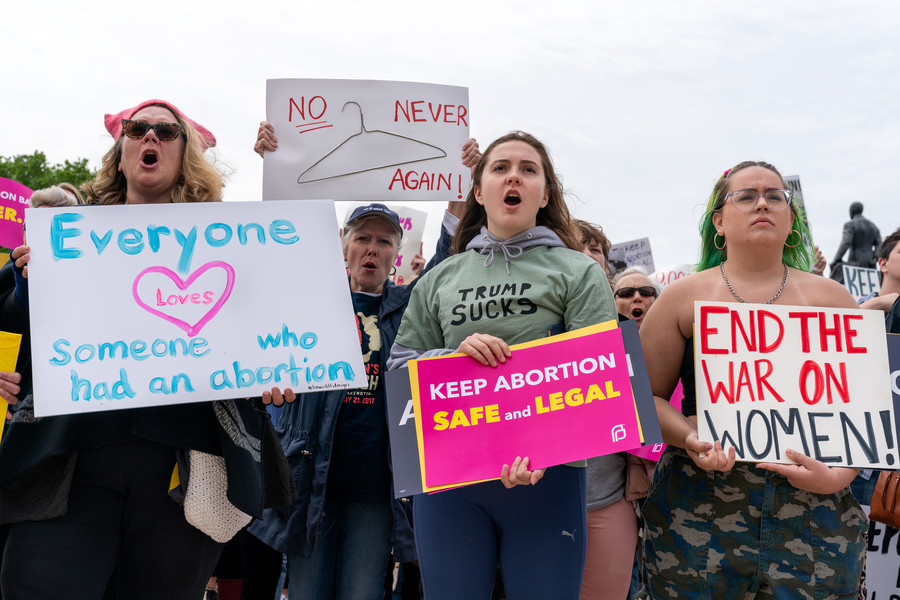 Everyone loves someone who had an abortion and other protests signs sign at a Stop Abortion Bans Rally in St Paul, Minnesota, in 2019 (Photo credit: Lorie Shaull/Flickr/2.0)

A difficult choice. The hardest decision a woman will ever make. A tragedy. A heartbreaking, situation. So sad. No easy choice. Not a form of birth control. Not something any woman wants to do. Not easy. Nothing anyone would ever be proud of. A complicated medical decision made by a woman and her doctor. Something we do when birth control fails–because everybody makes mistakes. Full stop. As all eyes turn to the Supreme Court today for the oral arguments in June Medical Services v. Russo (formerly June Medical Services v. Gee), it’s a good time to once again highlight the language we use to talk about abortion—and to acknowledge that words themselves are often a significant barrier faced both by people trying to access abortion care and those who advocate for it to be available to all who need it.

Louisiana’s June Medical Services v. Russo challenges a state law that’s more or less a carbon copy of one the Supreme Court overturned in 2016 with its Whole Woman’s Health v. Hellerstedt ruling. If enacted, the law will jeopardize abortion access in Louisiana by prohibiting doctors from providing abortion care without admitting privileges at a hospital within 30 miles of the clinic, among other trivial details. As was the case with the Texas law, Louisiana’s offers no medical basis for admitting-privilege requirements; rather, this requirement is among the state measures known as targeted regulations against abortion providers, (or TRAP) laws. Such laws exist only only to force the closure of clinics that provide abortions with the ultimate goal of making abortion less accessible.

In Louisiana, it’s already difficult for people to access abortion care. There are only three clinics left in the state today, which forces people seeking care to drive long distances, miss work, and find childcare (more than half of people seeking abortions already have children). On top of that, there’s a mandatory 24-hour waiting period that turns a procedure that could be done in one quick visit into a two- to three-day ordeal, making it even less accessible and more expensive. Additionally, given regulations banning insurance plans that come from the public health exchange, and those that cover federal employees and Medicaid recipients, abortion care as a standalone procedure is prohibitively expensive even before added costs like travel, lodging, and childcare.

I don’t agree with @TulsiGabbard on a lot, but do appreciate that she brought up the third rail for Democrats: that abortion should be “safe, legal, and rare.” We should reduce the need for abortions by investing in prevention.

If SCOTUS allows Louisiana’s law to go into effect, the outcome will be disastrous for abortion clinics around the country. When HB2 was in effect in Texas, more than half of the state’s clinics closed and the abortion rate dropped by more than 50 percent in some rural counties. There are six states in the country with only one clinic left, and those states in particular are vulnerable to TRAP laws like HB2 if Louisiana’s law is upheld. That’s why groups from all over the country are in Washington, D.C. for the oral arguments to make sure the Supreme Court—and Americans following the trial around the country—understand just how many of us want to protect access to abortion care.

Grassroots groups and national advocacy organizations have spent years envisioning and planning for a future without access to in-clinic abortion care, especially given the intractability of the Hyde Amendment. History has shown us that people will still find a way to have abortions when they need them—they’ll just be even less accessible for those without money and resources, and less safe for everyone. Which is why, regardless of June’s outcome, it remains important that we confront the barrier that we have yet to litigate or organize out of existence, and that’s abortion stigma. It’s pervasive, it’s uncomfortable to talk about, and it’s so deeply ingrained in our society that many of us aren’t even aware of it. It’s important to remember that the shame assigned to the act of terminating a pregnancy is, nearly 50 years after Roe v. Wade, the biggest hurdle many people face when they need an abortion.

It’s one people have to confront before picking up the phone to call a clinic; and it’s one that prompts a litany of questions: “Am I a bad person for doing this?” “Am I being selfish?” “Was I irresponsible?” “Have I had too many abortions?” “Will people judge me?” “What will happen if people find out?” “Will I be punished for this one day?” “Is this at odds with my faith?” These messages are ones that many people hear echoing in their own heads as they consider an abortion or wait for a termination appointment, and they’re reinforced by the way advocates, politicians, and journalists talk about abortion. Calling abortion a “difficult decision,” for example, reinforces the idea that it’s an inherently negative thing. And indeed, abortion can absolutely be an excruciating decision. But how does that impact a person whose decision to terminate was simple? What if you don’t feel conflicted? Studies suggest that the majority of people don’t struggle with the decision and report feeling only relief when it’s over. But talking about this relief is also stigmatized because it feeds an antichoice accusation that those who do must “hate babies” or seek out abortions just because we can.

That couldn’t be farther from the truth. For most, the relief is simply about being able to go on with our lives, much like the relief of ending a bad relationship or leaving a toxic workplace. If we’re serious about removing barriers to abortion access, we need to make sure we’re removing stigma from our language as well. And, that doesn’t have to mean using language that will alienate or turn off voters in moderate, rural communities. The opposite, in fact. One in four people with wombs in the United States will have an abortion by her 45th birthday, regardless of their political affiliations or feelings about abortion overall. We also know that about a third of Republicans support abortion access and want to protect Roe v. Wade. Rather, removing stigma from our language around abortion simply means being intentional about leaving room for everyone’s experience when we talk about it.

Instead of saying abortion is a difficult, heartwrenching decision that no one should ever have to face, try saying instead that abortion is a personal, complex decision that no politician should ever try to meddle with. Don’t qualify your support for abortion access by making it clear that you only support the “good abortions,” either. Phrases like “abortion should be safe, legal, and rare” are incredibly stigmatizing and do more harm to the movement than good. Saying that abortion should only happen in rare circumstances reinforces the idea that elective abortions without health indications are inherently bad. Yes, people who are facing uncertain fetal health outcomes or their own personal health challenges absolutely need compassion and empathy if they’re considering abortion. But the truth is, the vast majority of people who have abortions aren’t doing it for those reasons, and if someone feels like their reason isn’t “good enough,” they might not schedule an appointment.

Tying abortion care to birth control is stigmatizing too. By constantly insisting that we should do everything possible as a country and as individuals to avoid unintended pregnancies and “lower the abortion rate,” we’re reinforcing the idea that abortion is a bad thing we have to avoid. It’s also crucial to fight back against the attacks on birth-control access—often happening in the same states where TRAP laws are being passed, putting the lie to the premise behind June Medical Services v. Russo and other measures that claim to be about protecting women’s health. Insisting that abortion is a shameful, private, personal matter that shouldn’t be discussed in public leads people to, well, not talking about their abortions. When that happens, people feel alone, and even more ashamed. It’s a vicious cycle that we can stop if we’re intentional about it. The point of fighting for abortion access is making sure people can access care when they need it. Abortion needs to be legal, yes, but it needs to be accessible too—and keeping it so requires us to make sure opponents of choice can no longer weaponize stigma.