About the Cover: The 20th Anniversary Issue | Bitch Media

About the Cover: The 20th Anniversary Issue 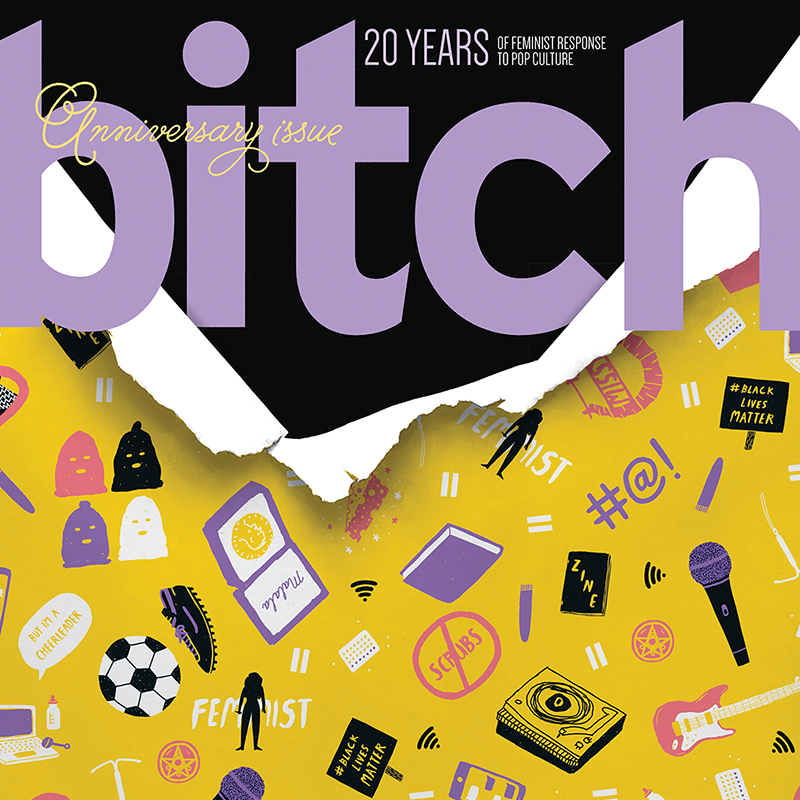 For our 20th Anniversary issue cover, I wanted to design something that would honor our zine past, as well as the more “grown up” 20-year-old version of Bitch.

We hoped this cover could look back on some of the things from the past 20 years that we feel fondly about, whether because we love them or love to hate them. Our wrapping-paper cover also hints at the exciting things the next 20 years might bring. We’ll reveal some of the hidden movie references, sporty moments, and Beyoncés from the cover throughout this anniversary year—but for now, see what you can find.

The final design was a true community effort. The entire Bitch staff worked together on a long list of pop culture moments that could be woven together into a pattern. Leslie A. Wood, a past Bitch illustrator who is also a fine artist based in New York, has recently been experimenting with all kinds of surface design in ceramics, murals, and even with cool ways that she shows her pottery in photos. I knew she’d be able to not only unify our soup of ideas into something great, but also consider how I was going to use her work in the final cover design.

ABOUT THE ANNIVERSARY ISSUE ART

Inside the issue, you'll discover articles organized into four themes: history, culture, identity, and community. I chose four illustrators to create full-page works, one for each theme, that would highlight the section and stand as an independent gallery in the magazine. While they're tied to the theme, they were meant to show off each artist's perspective and ideas with feminism and pop culture in mind. Here are some insider notes on the concepts behind the art and our illustrators. 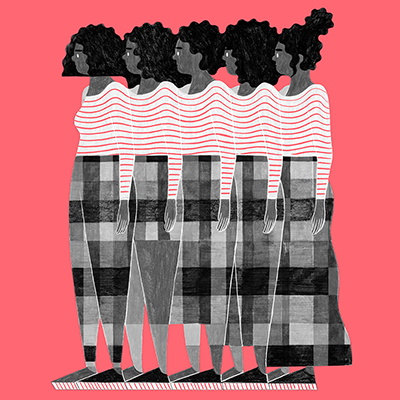 History, to us, was something we wanted to show not as a stagnant tome written in stone, but as something alive. History breathes and changes depending on the lens we look through. As we examine history, as we learn more about how it was recorded, we also learn about what was omitted; we fill in gaps, we reshape it. History shapes us, but we shape history as we look back. As our feminism evolves, our notion of our history evolves, too. Our stories weave together and live side-by-side to bring us into the future. With all this concept in mind, a visual representation of history could have become heavy, fast. Eleni's work is infused with a sense of fun and movement, blending a techy edge with visual “glitches” and jumps, with strong analog textures that look like “old” print media. Eleni's piece, to me, shows a visual evolution of style, but also a bigger idea of flow and change, through us and with us. 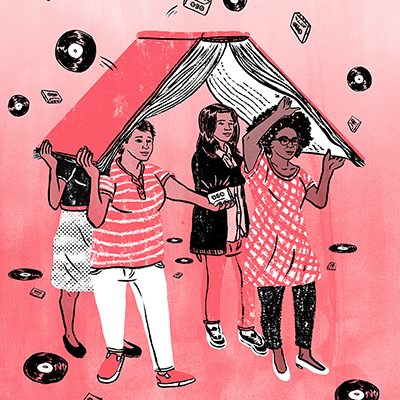 Daniel Fishel has been an outspoken advocate for up-and-coming illustrators and a strong voice for professional practices, speaking openly about both in a way that educates and is FUN. He's an educator and was just named to Forbes' ”30 Under 30” list in the “Creatives” category. Also, he has a cat named Avocado who I'm pretty sure half-runs his business. All these things made him the perfect person to illustrate the theme of culture for our issue, where he shows a group of women supporting and celebrating each other and the various kinds of pop culture surrounding them. 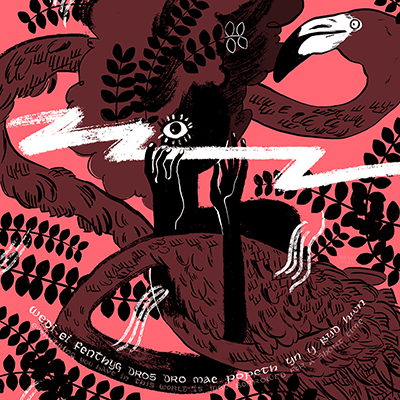 The sketch we chose for Nicole Miles' identity piece was the most personal of her concepts. We spoke about how identity can be confusing, and what truly makes us who we are. Is it what we do? Is it things we cannot help, like where we're from? And what is it to be unique? These ideas can bring on melancholy feelings, but her piece ended up with a celebratory mood. Nicole unlocks some of the symbols in her piece:

“Although my nationality is Bahamian, my dad is Welsh, but I've never been able to fully reconcile the idea of Welsh being a true, full part of my identity… partly, I'm sure, because I grew up in The Bahamas and had no real 'living' experience of Wales until university. The Lignum Vitae (which is the national plant of The Bahamas) represents a kind of growing amidst an inner 'unusualness.' It's one of the trees whose wood sinks, and I think there's a weird feeling of sink-or-swim with getting to know who you are or will grow to be. The flamingo's feathers become more like the kind of crepe paper Junkanoo costumes are made of. A lightning bolt strikes across where the mouth should be, and an eye observes everything.”

The writing in the image is a Welsh proverb: “Everything you have in this world is just borrowed for a short time.” 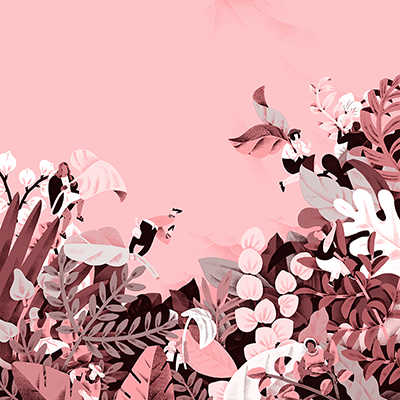 Jeannie Phan is both a zine-maker who tells her own personal stories and an illustrator who is heralded for strong, conceptual editorial illustration. Self-described as a “hopeful green thumb,” her optimism (and of course, her plant-mom skills) made their way into her piece. We discussed the idea of community as a group made up of strong individuals who thrive together. Jeannie brought this idea to life by illustrating tiny women working together to build a shelter from plants. They're making a home from resources foraged from their environment.

Subscribe here to get your very own copy of our 20th anniversary issue!

Relevant: About the Cover: Kids These Days 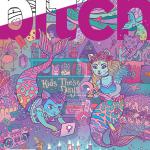 by Kristin Rogers Brown
What would the bedroom of a feminist teenage merkitten look like? Boom. Illustrator / designer Kristen Dullum had us covered.