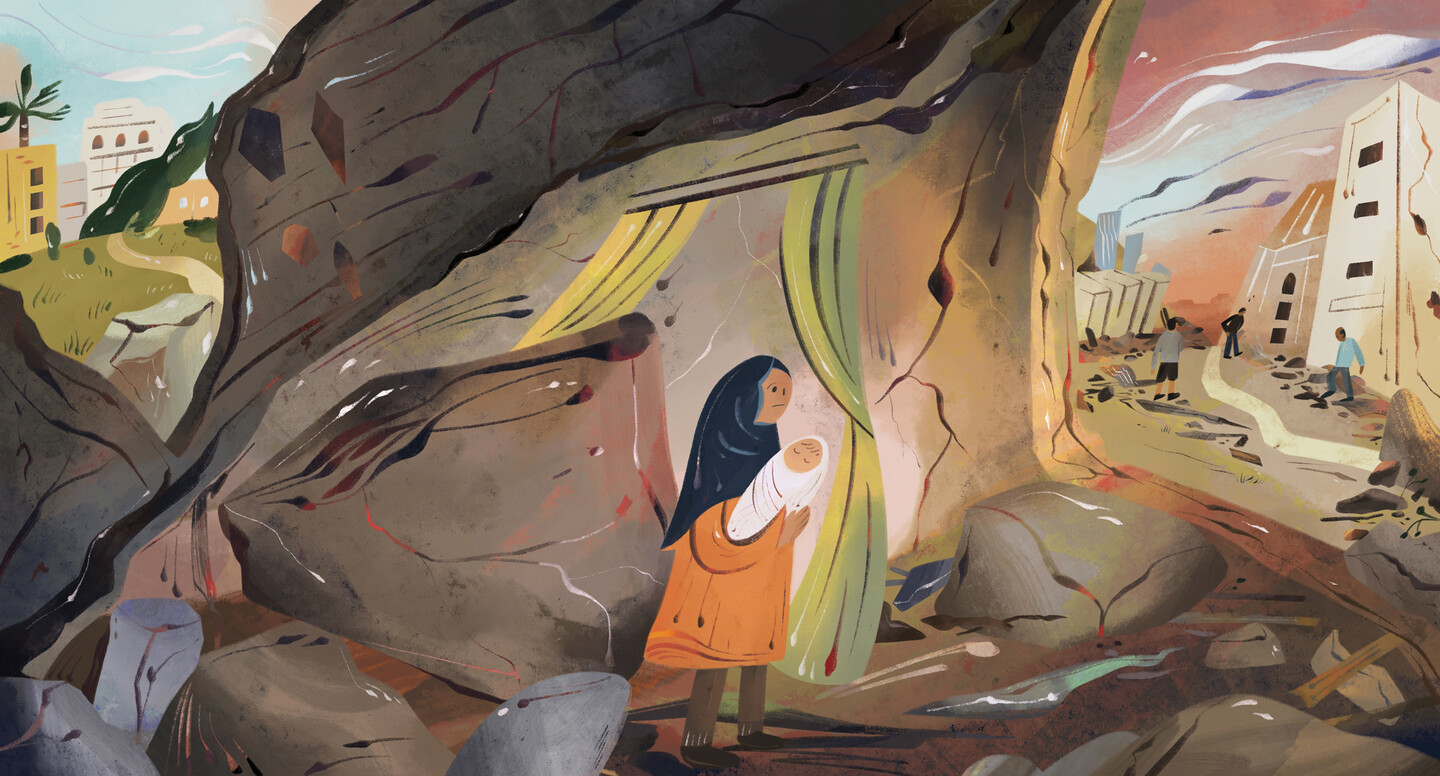 The goal of Israel’s settler colonialism has always been to erase Palestine. Since the beginning of the occupation in the late 1940s—even earlier when you consider the Balfour Declaration and British Mandate—cities and towns belonging to Palestinians have been stolen from them. Meanwhile, the places they are allowed to live in are underdeveloped and under constant threat of seizure by the Israeli government. Palestinians are even deprived of basic necessities such as water, healthcare, and electricity. “Curfews, road closures, home demolitions, land confiscation, and air raids are part of our daily life,” Jennifer Jajeh, Palestinian comedian and actor, tells Bitch. When she lived in Palestine, Jajeh says she was tear gassed, shot at, and witnessed children being beaten, harassed, and arrested. “We had to ration water for showers but drove past neighboring settlements with swimming pools and lush green lawns,” she says. “We waited hours at checkpoints and were often stopped, searched, and [sent] back while settlers zoomed by on Israeli-only roads.”

The economic costs of this occupation are steep. “Palestine is geographically fragmented, and the Israeli colonial regime has done all [they can to] divide us,”Hala Marshood, a Palestinian feminist activist and researcher based in occupied Jerusalem, says. Nearly 130,000 Palestinians currently work in settlements and inside the green line (the pre-1967 border that existed before Israel seized more land after the Six-Day War), where they are sometimes turned away on their way to work or are stuck on the wrong side of the border because of sudden curfews. Movement restrictions and Israeli control of Palestine’s most fertile land cost Palestinians about 110,000 jobs per year, according to the United Nations Conference on Trade and Development (UNCTAD). “Had there been no Israeli stranglehold on the Palestinian economy [or] settlements stealing the most fertile and resource-rich areas, Palestinians could have created nearly two million new jobs since the year 2000,” says Rawan, a Palestinian woman who cocreated DecolonizePalestine.com with her husband.

Palestine has faced even more economic challenges since the pandemic began, but the occupation means that Palestinians have “no access to external borrowing, no national currency, no independent monetary policy, and no fiscal space,” the UNCTAD reports. Even before covid-19, access to healthcare was fraught for Palestinians. Pharmacies in the West Bank and Gaza are bound by agreements with Israel that prohibit Palestinians from buying cheaper pharmaceuticals from neighboring countries, requiring them to rely on Israeli supplies. Rawan says this is a problem because Palestine doesn’t have control over imports and exports, so its ability to import raw materials for Palestinian pharmaceutical manufacturers is limited. She explains that in the Gaza Strip, “medicines are allowed in but not out.”

This means that Gaza’s overfilled hazardous waste sites are forced to process the expired medication, leading to “pollution of water resources in Gaza” and “even more health problems.” During the latest bombardment, Israel destroyed the only covid-19 testing lab in Gaza and killed Ayman Abu al-Ouf, the doctor overseeing al-Shifa hospital’s coronavirus response. That same day, Mouin al-Aloul, Gaza’s top neurologist, was also killed. Before the May 20, 2021, ceasefire, Israel had damaged six of Gaza’s hospitals and 11 primary care centers. One hospital stopped functioning because of a lack of fuel, and others dealt with shortages of icu beds and ventilators. The situation in Gaza has always been especially dire, and it’s important to remember Gazans struggle even when things are more stable, not just during Israeli onslaughts. No matter what is happening in Gaza, Marshood says, “Gazans live in a reality of slow death, being imprisoned, stripped of material resources, and isolated from the rest of the world,” even from the rest of Palestinian society. Dania, a Berlin-based Palestinian writer and policy analyst, explains that “there is an entire generation who has been born into Israel’s war, who if not already killed or maimed, has been surviving [continual] bombardments. The suffering we see on tv is only the tip of the iceberg.”

Now all eyes are on Palestine thanks to the imminent threat of ethnic cleansing in Sheikh Jarrah, Silwan, and beyond. Palestinian families are being evicted from Sheikh Jarrah to make room for Israeli settlement. After the land was sold to a U.S.-based organization that funds and supports Israeli displacement of Palestinians, these residents were accused of not paying rent. Palestinians fear becoming refugees for a second time: They were forced to move to Sheikh Jarrah in East Palestine after their homes in West Jerusalem and elsewhere were seized in 1948. In response to the pending evictions, Palestinians rose up to #SaveSheikhJarrah, protesting in the streets during Ramadan. Israeli police and soldiers responded with violence, targeting Palestinians at the holy site of Al-Aqsa Mosque. (The situation in Sheikh Jarrah escalated to the Israeli Supreme Court, and on August 1, 2021, a judge offered a terrible deal wherein Israeli settlers will own the land—and Palestinians living there must acknowledge this—and Palestinians who pay rent will be safe from eviction for an unclear period of time.) The violence didn’t end there: Rawan shared that her family’s village was barred from moving through a nearby checkpoint during the uprising and many could not get to work.

No part of Palestinian life is free from Israel’s terror, but Palestinians’ will to free themselves from Israeli occupation is as strong as ever.

“My family’s village is in Area C, which means total overt control by the occupation,” says Rawan, “so their circumstances have been and remain precarious.” The closing and opening of checkpoints is completely up to the discretion of Israeli military personnel and government officials who implement curfews and treat people like “cattle squeezed into narrow and inhumane metal corridors and gates,” according to Dania, who also experienced checkpoints. No part of Palestinian life is free from Israel’s terror, but Palestinians’ will to free themselves from Israeli occupation is as strong as ever. “The reality in Palestine only gets more violent and harsh, and it’s easy to give in to the feeling of despair,” Marshood says. “However, there are times that ignite the feeling of hope in you once again.”

Recent social media attention has created a narrative shift for those living in Palestine. Jajeh sees the foundational work of the Black Lives Matter movement and the lgbtq communities in the past few years as integral to helping people understand that movements are interconnected. She was shocked to see “celebrities, people with large platforms, calling for justice and an end to the violence.” Because of the unrelenting activism of young Palestinians on the ground, Rawan believes that “people have become more aware.” Much of this has to do with the Kurd twins’ coverage of the “blatant stealing of their home even while receiving threats to stop doing so and being imprisoned,” says Rawan. They’re showing people what it means to be Palestinian amid an ongoing ethnic cleansing campaign. For Marshood and other young Palestinians, the recent uprisings represent the unity of the Palestinian people. “The uprising was when we as a collective regained our agency and political will and mobilized from our daily pains and lived realities,” she explains. Palestinians of all ages plan on moving forward with unity and renewed energy, using the recent hyperfocus on Palestine to keep international attention on their fight for liberation—a fight they intend to win.

Read this Next: Pretty Hurts 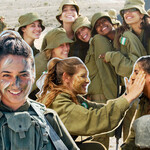 by Isobel van Hagen
Their gendered advertising is seemingly created to sanitize the violence they inflict on Palestinians.