The writing debut of comics artist Leila del Duca centers on teenage siblings Boetema and Inotu, whose flaky parents generate constant upheaval in their lives, moving them from place to place whenever their schemes are uncovered. As the story begins, their parents install them in a new town and abandon them there. When Inotu runs afoul of a powerful and dangerous man, the siblings find themselves on the run, looking after one another while working to understand the vivid, confusing dreams that have begun to affect Boetema’s waking hours.

Boetema’s dream state is fascinating: Not only does she find herself in other ecosystems, planets, and worlds, but in human and animal bodies as well, adding to the nocturnal intrigue. Seaton’s art beautifully captures the characters, as well as the dreamworlds, making Afar’s scenes—even ones that last only two panels—compelling.

Both the story and the characters really take off when Boetema realizes that she is astral traveling—that the places she visits are real—and the siblings must flee their home to keep Inotu safe. But while there is a lot readers need to know, the story often feels too rushed. In some places, del Duca offers very detailed information that might not be necessary to the story; in others, things are either unresolved or resolved too soon. At novel’s end, I’m left wondering too many things. Am I supposed to read Inotu, whose purpose in the larger narrative is unclear, as a kind of bumbling sidekick? What’s the story with Abrinet, the powerful young female ruler of a matrilineal estate who gives the siblings shelter? And we need more time with Agama Wanwitu and an as-yet-unnamed character, both of whom begin to help Boetema understand and master her powers.

As for Boetema herself, there is a reason she’s our hero, but it hasn’t been made clear.

I wanted to be fully absorbed by Afar; as a comics fan, I’m always up for something new that looks to stretch boundaries. And when that thing is a story with a woman of color in the lead? Yes, please. But don’t give us a Black woman for the sake of giving us a Black woman and then not develop her in a real way—that makes her blackness seem like a hook, something “on trend” that is used simply to get people to read the story. Del Duca and Seaton aren’t Black women, but if they’ve chosen to have their character be one, they need to make it clear that they have an idea of what her blackness means.

Though Afar was published as an original graphic novel, its unfinished business makes me hope for a future sequel, a chance to let the narrative arc spool out more slowly, allowing readers to savor the telling.

Relevant: Anya to Zombies: An Alphabet of 26 Graphic Novels by Women 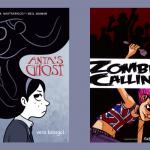 by Shaenon Garrity
A killer A-to-Z reading list of comics by women.