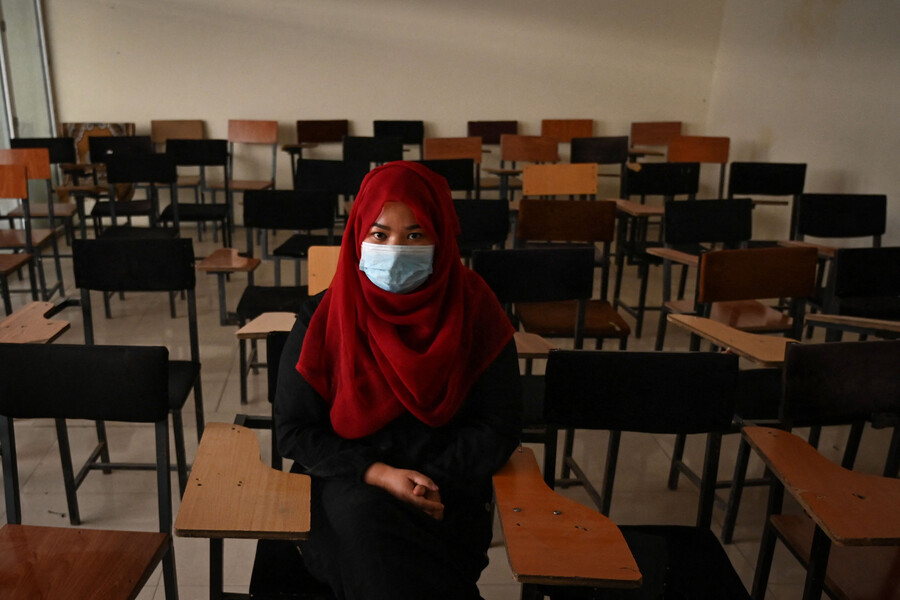 A student sits inside a classroom after private universities reopened in Kabul on September 6, 2021. (Photo by Aamir Qureshi/AFP via Getty Images)

In the final days of summer, America’s 20-year war on Afghanistan ended exactly how it began: A botched drone strike, intended for a suspected enemy, killed civilians instead. Hours after the strike in Kabul on August 29, the defense department said that they had killed an ISIS-K car bomber heading for the airport; in reality, they killed ten members of the Ahmadi and Nejrabi families—including seven children—who were preparing to emigrate to the United States.

In the chaotic and violent weeks following Joe Biden’s July 8 announcement addressing the withdrawal of U.S. troops in Afghanistan, many conversations have echoed similar arguments and attitudes that first circulated in the war-hungry aftermath of 9/11. One particular discussion point? Feminism. On June 14, the Bush Center put up a new video on their YouTube account. Laura Bush looks piercingly into the camera, and claims that since 2001 “the United States has stood in solidarity with Afghan women.” I wonder what feminist solidarity means to Laura Bush; whether she would seriously interpret the death of more than 71,000 people—women, children, families, partners—as feminist work.

It is obvious that women will suffer greatly under the gender-based violence of the Taliban. From the mid-1990s through 2001, the Taliban banned girls from attending schools, prevented women from leaving the house without an escort, and instituted public executions for crimes such as adultery. Despite their claims of moderation now—they’ve said that they don’t intend to stop women from working—evidence shows that the opposite is true. Over the past few months, women with public lives in Taliban-controlled rural provinces have been assassinated, and schools have been set on fire. In recent weeks, as the Taliban have taken Kabul, Laura Bush’s faux-feminist claims have been increasingly echoed in media coverage and the wider cultural discourse. Conservative commentators such as Meghan McCain have lambasted Biden for withdrawing from Afghanistan at all, reiterating her primary concern for the “women and children” in Afghanistan. On August 16, the New York Times published a piece titled “Desperate Afghan Women Wait for U.S. Protection, as Promised,” framing Afghan women as agentless objects, dependent on the paternal U.S. for their protection. Although the rights and safety of all those affected by the Taliban’s fascism should be a major concern, the ongoing cultural discourse around women and girls is a haunting reminder of American warmongering that co-opted the idea of feminism to push for military intervention.

In ratcheting up support for the War, some American feminists rallied around the goal of bringing Western conceptions of women’s rights to Afghanistan. After the tragedy of 9/11, the war was billed not only as retribution for the loss of American life, but as a “feminist” war that would bring liberation to the oppressed women and girls of Afghanistan. This argument has been used to justify foreign military presence time and again. In 1958, the French military bussed women from across Algeria to the capital, where they staged intensely choreographed ‘unveiling’ ceremonies. During these ceremonies, the wives of French generals would remove the head coverings of Algerian women, supposedly demonstrating that they were being won over by Western liberal values. However, the primary function of the public unveilings was to retain popular support in France for the military’s continued presence in Algeria. In 2004, President Bush claimed that, at least in the field of gender, victory in Afghanistan had already been won: “Three years ago the smallest displays of joy were outlawed. Women were beaten for wearing brightly colored shoes. Today we witness the rebirth of a vibrant Afghan culture.” The next step would be continuing this supposed success by liberating women in Iraq.

In the United States and elsewhere in the West, we are often presented with a false choice between interventionism and isolationism, in which those who object to overseas military invasions and war are accused of objecting to all forms of international solidarity. Opposition to war is then constructed as unconscionable, given the atrocities and horrors being committed in foreign lands. In the War on Terror, this viewpoint was magnified because the state also subsumed feminism into its foreign policy goals. This is what led celebrity feminists such as Meryl Streep, Mavis and Jay Leno, Susan Sarandon, and Eleanor Smeal to initially support Operation Enduring Freedom, the first airstrikes of which marked the beginning of the war in 2001.

Yet the false dichotomy between military action or simply standing by represents a crisis of imagination fueled by the military-industrial complex. War is an intensely gendered event and disproportionately harms women who are usually responsible for managing access to resources such as food and water. At the same time, when displaced, they are more likely to be handling the additional burden of childcare. Women are often shrunk out of collapsing economies, and the death of partners and sons is not only traumatizing, but a threat to their own survival.  When the United States detonated the “mother of all bombs” in northern Afghanistan in 2017, the strike killed dozens of civilians and left severe health impacts on surviving pregnant women and newborn babies. (As Anand Gopal’s recent article in The New Yorker unpacks, women living in rural Afghanistan were treated as sacrificial lambs by the occupying powers, who concentrated the majority of their “philanthropic” resources on the capital of Kabul.) The do-nothing or go to war binary ignores the fact that the threat of the Taliban is magnified by the construction of border walls and the growth of political hostility to migrants throughout the world. As feminists, our choice can never be between neo-colonial, never-ending interventions or complacent inaction, but must involve the abolition of the border state, which has played a major role in the death of Afghan asylum-seekers who have no access to a way out.

Women in Afghanistan can determine what a liberated future looks like for themselves.

Elsewhere in South West Asia, the remarkable achievements of the Kurdish Women’s Movements provide an instance of liberatory organizing in defiance of the state. The group implemented autonomous organizing structures and networks across Kurdistan in 1978 and during the ongoing Rojava revolution which began in 2012. While the West has consistently cast women in essentialist terms as helpless victims of conflict (and by extension, reducing Brown men, too, as constant vectors of political violence), Kurdish women explicitly articulated their oppression not just as a consequence of patriarchy, but of a lack of local autonomy and democracy. The long legacy of Kurdish women’s militant resistance to state-led oppression, even preceding their fight against ISIS, shows that there is no need to import Western feminism into the Middle East via militarist imperialism; rather we can look to the central role that Kurdish women played in establishing self-government, regional autonomy and grassroots democracy in Rojava to bolster our belief that women in Afghanistan can determine what a liberated future looks like for themselves.

If the invasion of Afghanistan was itself motivated by needing to “liberate” Afghan women, this vision of an imposed freedom has been strengthened by the new female face of the U.S. military. The term “securofeminism” refers to the idea that fighting terrorism is inherently feminist, and that installing women into senior positions in the army and homeland security agencies is feminism, too. This thinking reinvents the armed forces as liberal institutions where women are able to succeed, presented in direct contrast to the “backward” societies being invaded that the army must emancipate. In the United States, the same idea has further been dispersed through material such as Zero Dark Thirty, in which Jessica Chastain won’t stop torturing people until she finds Bin Laden, and Homeland, where we are expected to sympathize with Claire Danes, who plays a CIA operative struggling to be taken seriously within the agency. Further military developments, such as an end to the ban on openly LGBTQ soldiers under the Obama administration in 2011, contribute to the pinkwashing of war. The War on Terror has allowed the United States to pretend that they are not only working for the advancement of gender parity abroad, but also the empowerment of women at home.

Now that U.S. troops have officially left Afghanistan, liberal feminists must not fall into the same fervor of advocating for invasion and military solutions as they did in 2001. As Sheryl Sandberg, Amanda Gorman, Charlize Theron, and others co-sign a letter that vaguely calls on President Biden to “protect and invest in women in Afghanistan,” we must resist falling into the active or passive acceptance of intervention because we see no other way. Feminism is primarily a mode of resistance, and cannot be produced by any state. In the words of Joy James, Black feminist scholar and author of Resisting State Violence, “state feminists will agree that there’s chauvinism, patriarchy, sexism, homophobia. They will not agree that […] the state is a hunter, that imperialism is a zone of terror, because once they do that, the funding dries up.” 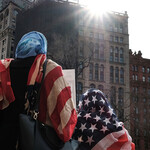