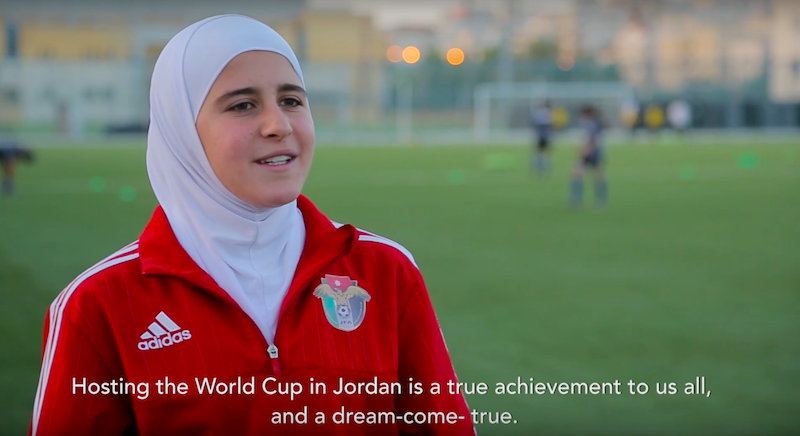 Soccer player Tasneem Abu-Rob, as seen in a promotional video for the Under-17 Women’s World Cup.

During the inaugural match of the 2016 Under-17 Women’s World Cup, hosted by Jordan on September 30, an event occurred that elevated the moment into the history books of women’s football: Two players wore headscarves on the pitch. Tasneem Abu-Rob and Rand Albustanji, two of Jordan’s starters, became the first players to wear a hijab at a FIFA-sanctioned world tournament. The optics of Muslim women charging out onto the pitch to the sounds of adoring crowds filled with Arab girls and women was striking.

It has only been two years since FIFA formally lifted their worldwide ban on headcovers. FIFA regulates all kinds of soccer uniform rules, like jersey color, but the ban on headcovers amounted to a form of religious discrimination—it had long affected Muslim, Sikh, and Jewish players who might observe their faith by covering their heads.  The ban effectively prevented those players from competing in any FIFA-sanctioned matches and halted their access to the sport they loved.

When the ban was lifted, the International Football Association Board declared support for a game that includes more women players around the world. The move to allow hijab was hailed as a new dawn by many players and football federations. Particularly because, historically, FIFA has not advocated for female players. In fact, before and after lifting the head covering band, FIFA has been a general cesspool of sexism, with corruption to boot.

The Under-17 Women’s World Cup has never been held in the Asian Football Confederation before—nor has a FIFA women’s tournament been hosted in the Middle East before this fall. Many advocates of the sport feel this is also an important step for the development of the women’s game on a worldwide level.

Jordan was instrumental in campaigning the IFAB to change the hijab ban, so it is fitting that the country hosted the historic match. Although the Jordanian U-17 team has not won any of their matches so far (they lost their first bout against the tournament favorites, Spain, and the tournament wraps up on October 21), they earned many accolades for their determination and resilience from fellow players and FIFA executives.

Moya Dodd, the vice president of the AFC and a candidate for Asia’s women’s seat on FIFA Council, told me over email that the U-17 players could only elevate the women’s game. This could be a push toward shifting headlines and attitudes that are fixated on men’s sport. The ball seems to be rolling in the direction of better women’s soccer.

“I think much of the country is on the same journey,” Dodd says. “And I hope that young women in the entire region will see this FIFA tournament and be inspired that they too can participate fully in sport and in society.”

Jordanian player Rouzbahan Farji had to work hard to ensure a place on the team but also to encourage her family’s support. In some cultures around the world, football is seen as a man’s game. Farji’s mother explained that somes cultures and customs in Jordan dicate that girls are not to be encouraged to play football. Initially, Farji’s mother had concerns about her daughter’s physical safety, but after years of training and playing, Farji’s mother and extended family are now supporting Farji’s journey. This show of solidarity will help people unlearn toxic behaviors that include not supporting women in sports.

The Jordan Football Association has been a fantastic host. Fusing Jordanian culture with football is a powerful step towards elevating the women’s game in the Middle East. Not only can culture accommodate sport, is can strengthen it.

The exposure and experience of participating in a Women’s World Cup is invaluable and crucial for team development as they move forward. “This is one more signal that the game is doing more to accommodate all players, regardless of gender or cultural background,” Dodd adds.

As part of a commitment to equality, it is crucial to make it possible for athletes to choose what they want to wear as they compete in sport. It should be possible to accommodate a religious or cultural belief or simply a clothing preference. This summer, American fencer Ibtihaj Muhammad became the first Muslim woman to wear a hijab and represent the United States at the Olympics. Prior to winning a bronze medal in Rio, Muhammad was criticized for speaking up about the gendered Islamophobia she faced in America. This is a Black American woman being very clear about the bigotry she faces. She is unapologetic, and her voice is very powerful. Muhammad using her platform to advocate against racism and misogyny is important in a country where the political rhetoric is laced with misogyny. Muhammad is more than her scarf, and often, sports media does not focus on athleticism in a nuanced manner, but fixates on the “novelty” of the hijab—which is also problematic. 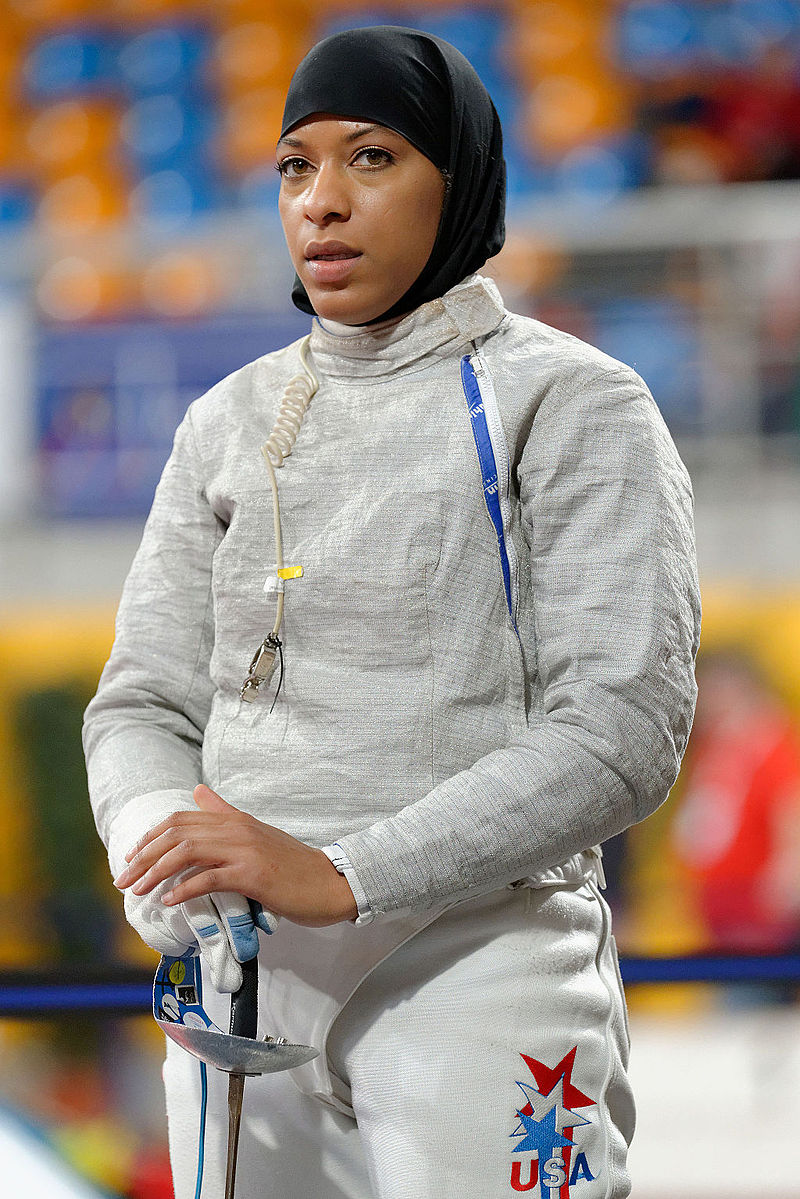 It can be easily argued that Muhammad and a plethora of incredible athletes inspire young girls all over the world. Representation matters and so do inclusive sports policies that allow young athletes to follow their dreams.

The idea that men implement clothing bans and policies is rooted in principles of control and power over women’s bodies. The headcovering ban in soccer has this in common with other forms of body policing, like the “burkini ban” in several French cities that prevents Muslim women from enjoying beautiful beaches. French politicians insisted that brightly colored outfits with matching hijabs might be a connection to terrorism. The burkini ban was not only nonsensical and unjust, but it was another example of men deciding what women can and cannot wear during recreational activity. Men did not consult women when making these misogynistic policies and used feeble reasoning to justify this form of control.

Unfounded excuses of safety continue to keep women away from the sports they love.  For example, basketball’s international governing body still does not allow players to wear headscarves on the court.

Forcing women out of clothing is as violent as forcing them into it, whether it’s on the pitch, on the beach, or on the street.

What we have seen in only two years, in areas where women’s football might not have been considered a possibility, is astounding. Change is illustrated when unjust policies, decided predominantly by men, are overruled.

For the U-17 WWC in Jordan, Dodd tells me that more than 70 percent of the Local Organizing Committee—the group that organizes and plans logistics of the tournament—are women. “Not only is the LOC working with women, FIFA [is] as well. In addition to the team organizing the tournament, all the venue managers are females, as well as their assistants. The media officers are as well, [and] all the match officials.”

It’s essential for FIFA to make systemic change to support girls and women in the sport—they need to put women in positions of power throughout the organization and support them once they’re there.

Jordan’s U-17 World Cup team did not pass through the group stage, but Albustanji insisted that the experience was invaluable. “Despite the three defeats and the many goals we conceded, we picked up a lot of useful experience for the future,” she said. “This was the first major competition for our team and we’ve never been exposed to this level before.”

Not only can all young women take a shot at a World Cup trophy, they can and should play ​​wearing whatever they choose providing that it is properly approved like all other kits and equipment. 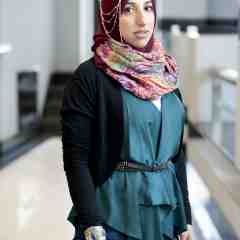 Shireen Ahmed is a sports activist and a freelance writer who focuses on Muslim women, and the intersections of racism and misogyny in sports. When she isn't watching soccer, she drinks coffee as tool of resistance.

The two starters of Jordan’s woman’s team deserve the upmost respect and praise for standing up and expressing their rights during an international soccer game. It is unbelievable to me that it has only been two years since this has become legal according to FIFA regulations. We all grow up and learn about when women gained the right to vote, and I think that many times because it was so long ago that we forget that we are still fighting for equal rights today. This particular article was very moving for me because not only did it show a gain for women’s rights but also is a step towards leveling the field for different cultural and religious backgrounds as well.
There’s no arguing that many Middle Eastern cultures are very patriarchal to the point of women often being treated as property; the idea that women’s only worth is to be sold/traded/married off to a husband is very prevalent in these countries. A woman that goes to school, has a job, participates in sports, etc. is such a new transgressive social script that, like the mother of one of the soccer players had indicated, it creates fear for the females’ well being and safety. This change in FIFA regulation that now allows hijabs to be worn is so much more than permitting a clothing item on the field: it allows female soccer players from these countries and cultures to participate in a sport that is still majority male participation. As more women participate in this sport, it challenges the cultural script of women being inferior and not able to play the same sport as men; it puts them on a more even playing field. It also tells the world that regulations put in place should not be allowed to determine what women can put on their bodies. For many western cultures, it is difficult to understand why these women would want to wear a hijab because we see it as a way of demeaning women, but this is only true if the women have a preference to not wear it. Feminism is about women’s right of choice and telling these conservative women that they cannot wear a head cover when that is their preference, goes against everything feminism is about.
This new regulation change is also a huge deal because its not just a rule that changes soccer in America, but has an effect internationally. It is so important that we continue to make strides towards women’s rights but doing so while also acknowledging that these strides may be different in different cultures or countries because of cultural variance.