The Fight for Trans Employment Protections Comes to the Supreme Court 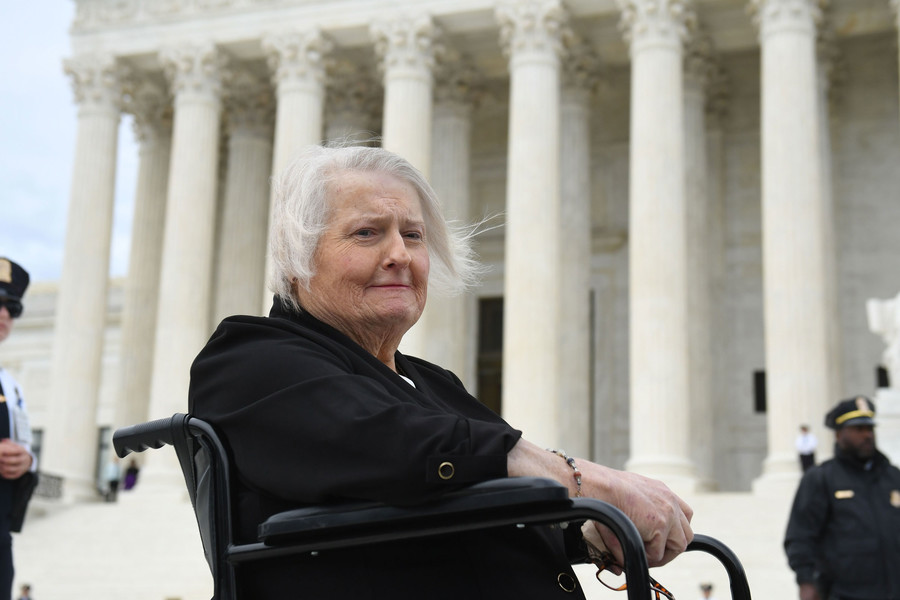 Aimee Stephens had been working as a funeral director for R.G. and G.R. Harris Funeral Homes in Michigan for six years when she told her supervisor information that her coworkers had known for a year: She’s a trans woman, and would be presenting herself as such from that moment forward. Her supervisor fired her. The subsequent series of events have taken Stephens from the prep room of a Michigan funeral home to the Supreme Court, where today the justices heard the case R.G. & G.R. Harris Funeral Homes Inc. v. Equal Employment Opportunity Commission—the first Supreme Court case to center on the civil rights of transgender people.

Stephens’s 2013 firing was undoubtedly illegal. She won the suit brought by the Equal Employment Opportunity Commission on her behalf. Omar Gonzalez-Pagan, a senior attorney at Lambda Legal, says firing Stephens on the basis of her gender is discriminatory because it violates the Title VII provision of the Civil Rights Act of 1964, which forbids employers from terminating employees who don’t conform with stereotypes about their assigned sex. R.G. and G.R. Harris Funeral Homes fought the EEOC’s claim, receiving support from the Christianist hate group Alliance Defending Freedom, and serial litigators that have engaged in a series of back-and-forth cases with the EEOC that argue the fundamental question that it’s legal to fire someone for being trans.

There are no formal legal protections for trans workers like Stephens in more than half of the United States, so litigators rely on Title VII, which also doesn’t explicitly name or extend protections to the trans community. One in four people have lost a job due to transphobia, while 75 percent of trans people have been discriminated against in the workplace. Both of these facts have contributed to high unemployment and poverty rates for trans people. Given the stakes, Stephens’s Supreme Court case, which is being heard alongside two related cases involving employment discrimination on the basis of sexual orientation, is a landmark moment. The Supreme Court has taken on very few cases directly pertaining to the LGBTQ community; Obergefell v. Hodges, the 2015 decision that legalized same-gender marriage, is perhaps the most prominent. Now it’s hearing three cases before a bench that some advocates fear may be hostile to social progress.

The Supreme Court could affirm what lower courts across the country have already ruled: It’s not legal for employers to discriminate against trans people. This case law, notes Gonzalez, comes from judges appointed by presidents from both major parties, reflecting a huge body of unequivocal understanding about discrimination. The Supreme Court could also rule more narrowly—or against Stephens entirely. Nevertheless, the Trump administration is rapidly codifying, by executive orders and rulemaking, the right to discriminate against trans people: Section 1557 of the Affordable Care Act, which affirms the rights of trans patients, is under attack. The Department of Housing and Urban Development is proposing that shelters should be allowed to refuse service to trans women. The White House has given approval to discriminate on the basis of religious attitudes or “morals.” The Department of Education has abrogated its responsibilities to protect trans children. Federal agencies have withdrawn antidiscrimination guidance.

These moves directly harm the LGBTQ community, especially trans women like Stephens, and they are especially bad for the Black, Latinx, and Indigenous women who are also fighting racialized discrimination. All of this makes R.G. & G.R. Harris Funeral Homes Inc. v. Equal Employment Opportunity Commission especially important to watch, because it will likely set the stage for a larger conversation about workplace discrimination against the LGBTQ community. If the court rules against Stephens, for instance, the Alliance Defending Freedom may attempt to apply that ruling to other areas of antidiscrimination law, according to Harper Jean Tobin, the director of policy at the National Center for Transgender Equality.

But as the LGBTQ community waits for the Supreme Court’s ruling, it’s important to keep in mind that, as Tobin emphasizes, “The EEOC is still open for business. Discrimination against trans workers is already illegal.” The government is charged with enforcing antidiscrimination laws; and lower courts, including the ones who heard Stephens’s case, have made it extremely clear that firing someone because she’s trans is employment discrimination. That won’t change—if it changes—until the Supreme Court issues a ruling, likely sometime next summer. “You cannot opt out of civil rights laws based on personal beliefs,” says Tobin.

The government is charged with enforcing antidiscrimination laws, and lower courts, including the ones who heard Stephens’s case, have made it extremely clear that firing someone because she’s trans is employment discrimination.

It’s critical for trans people to keep these caveats in mind as media coverage of this week’s three cases ramps up. The hectic pace and tone of breaking news risk suggesting that there are no legal avenues available for trans people being discriminated against at work. That’s not the case, especially in the states that have explicitly extended protections to people on the basis of gender identity. Furthermore, this case—regardless of outcome—is neither the beginning nor the end of this issue; it’s also not only way to protect trans people from employment discrimination.

Individual states can develop their own laws that will protect trans people not just from unjust treatment on the job, but also at school, in housing, in healthcare, and in other contexts, taking advantage of the powers allocated to them under the Constitution. The federal government could also opt to pass the Equality Act, which cleared the House in May, weeks after trans flags suddenly appeared throughout the building as Democratic members honored the Trans Day of Visibility. This legislation would amend the Civil Rights Act to include trans people, creating robust nationwide civil-rights protections.

Senate Majority Leader Mitch McConnell is fighting to keep the Equality Act from having a fair hearing in the Senate, and were it to pass the deeply partisan chamber, it would likely face a veto from the president (who, despite all evidence to the contrary, still identifies himself as an ally to LGBTQ people). Legislation doesn’t always pass on the first round, and legislators can keep refining and reintroducing it until it does—yet another reason to push for Democratic control of the Senate as well as the White House, which once lit up in rainbow lighting to celebrate Obergefell. Though its current occupants try to force U.S. embassies to hide their rainbow flags during Pride month, they cannot ultimately stem the tide of change or history.

Read this Next: Trump’s Anti-Trans Policy Efforts Aren’t New—and Their History Is Horrifying

by Jes Grobman
The transition from Weimar to Nazi Germany and Obama-era to Trump-era United States have striking similarities.