“Alias Grace” Is a Survival Guide for Patriarchy | Bitch Media

Netflix’s limited series Alias Grace offers an unsettling parable of femininity in a choiceless world. It is perhaps a necessary work in a climate where many women feel powerless, but determined to tell their stories in the hopes of changing the status quo. If the Hulu adaptation of Margaret Atwood’s The Handmaid’s Tale was a horrifying vision of the future, Alias Grace is a frank look at the past.

The series—based on an actual case from 1843—details the story of Grace Marks (Sarah Gadon), a woman convicted of participating in the murder of her employer and his housekeeper and purported mistress. In this adaptation, Grace has been adopted by a group that wants to pursue her release from prison. They hire a psychologist, Dr. Simon Jordan (Edward Holcroft), to interview her in the hopes of gleaning enough evidence to support a pardon application. In a series of sessions with Jordan, Grace tells the story of her troubled life and the day of the murder. It can be challenging to pull off a story driven by an unreliable narrator; there’s a tendency for such works to feel contrived or to fall apart. From the start, Grace’s unreliability makes the entire story unstable, which forces the viewer to constantly interrogate every scene. Alias Grace turns every one of Grace’s stories into a giant question mark, and by the end, it’s uncertain if she’s told the truth about anything, beyond the fact that two people died and she was jailed for their murders. She leads her would-be rescuers on a merry dance by relaying exactly what they want to hear.

Throughout the series, Grace constantly changes, adjusting her demeanor to best suit the environments she finds herself in. One moment, she’s a meek model prisoner; the next, she’s lively and intelligent; at another, she’s taken over by another personality that’s violent and sexualized. Is she a manipulative, canny woman, or someone bent on survival? Posing that question at the outset makes her more compelling. It’s the kind of question that a female-led team is more likely to ask, since it is very familiar for women struggling in male-controlled systems, whether it’s Hollywood or 19th-century servitude. 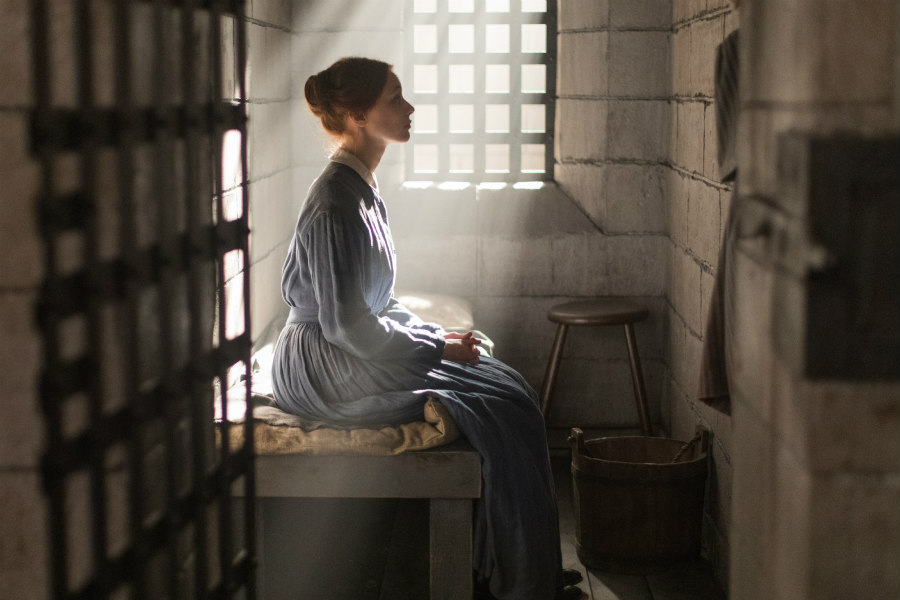 Atwood’s work explored the strange and very real world of wealthy people who undertake charitable intervention missions just like this one, from slumming to prison ministry, but the real power of the book and the Netflix series lies in the exploration of what it means to be a woman under the patriarchy. That’s a story that women themselves are uniquely equipped to tell, for they have an intimate personal experience that informs their understanding.

Grace has been passed from abusive man to abusive man her entire life. Her story begins with her alcoholic father who beats and possibly rapes her. There’s the son of her first employer who pursues her relentlessly, though the exact nature of their relationship is ambiguous. However, she says that servants are expected to put up with “the usual,” which she implies includes systemic sexual harassment and assault, so “usual” that she doesn’t need to dwell on details. Then there’s her exacting new employer’s cruel housekeeper, Nancy Montgomery (Anna Paquin), and the servant James McDermott (Kerr Logan), who conspires with Grace to commit murder. In prison, there’s the benign prison governor and the men pushing for her pardon, along with the psychologist who presses her to go through the details of a traumatic life.

Her middle-class benefactors don’t probe deeper—after all, she’s just a rough woman of the lower classes, an Eliza Dolittle they’re reshaping to fit their own desires. When Grace tells the truth about being sexually abused, no one listens to her. They view her experiences as irrelevant to her storytelling. Dr. Jordan at times seems impatient with her as she talks about the abuse she endured in her youth, and he’s pressured to permit Grace to go under hypnosis to “speed things along.” Instead, people cling to her lies, crafting a simplistic, perfect vision of her life. She’s not a duplicitous, sly, sneaky woman getting the drop on everyone around her, but a traumatized woman fighting for survival. Dissatisfied with the direction of her interviews, her do-gooders hire a spiritualist to hypnotize Grace, resulting in a shocking scene when the ostensibly entranced woman reveals a crude, lascivious split personality.

Ultimately, Grace is pardoned, but after her release, she’s delivered right into the lap of another man who views her as his property. The series ends with a poignant scene: Her husband is pressing her to talk about being abused in prison while Grace tells the audience that she delivers the stories he wants to hear. Grace can never actually win or break free, whether it’s her father abandoning her to the workhouse, or prison do-gooders dumping her at the doorstep of a man who said that she’d eventually become his property long before. Her one attempt at taking control ends in murder. 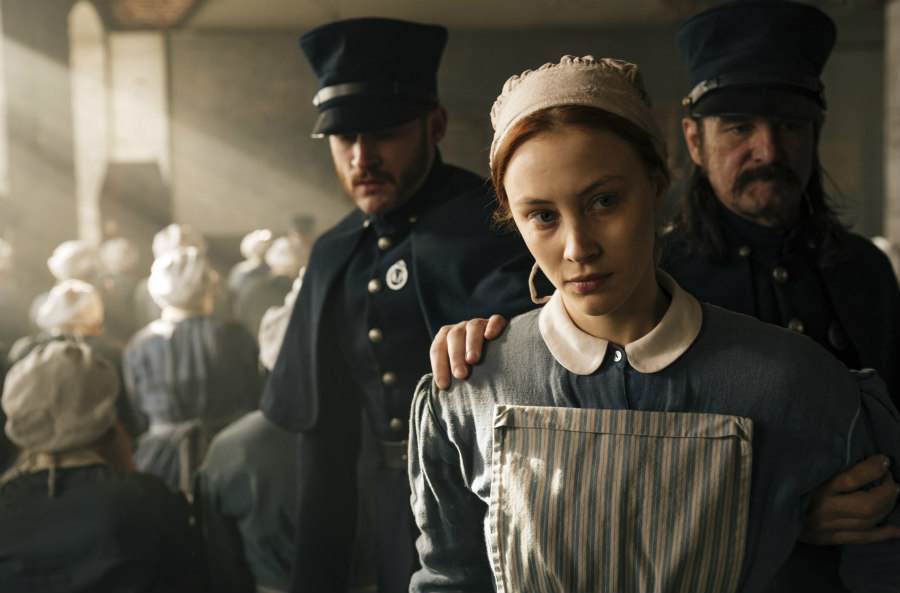 The patriarchy is inescapable. At best, Grace can steer the narrative to gain as much leverage as she can, a situation many women are painfully familiar with, particularly in Hollywood. As women in Hollywood are putting the industry on blast, tracing the series of steps that led to this moment reveals interesting parallels with Alias Grace. Women speaking out about sexual abuse once nodded, smiled, and spoke well of abusers because they knew that was necessary for survival. Grace spends her entire life embroidering and carefully structuring narratives that appease the taste of the men around her. She knows what to say and how to say it in order to accomplish her goals. Her story speaks to the awareness that women are viewed as inherently unreliable while being burdened with certain expectations that force them to be unreliable.

“Tell all the truth,” said Emily Dickinson, “but tell it slant.” Women who are imprisoned in contemporary America are expected to spin similar tales of privation and reform, objectifying themselves in the quest for freedom. They’re asked to display the correct level of repentance and desire for absolution in a story that must start with lascivious and gruesome recitation of their crimes, followed by abject apology, and a pledge to make good on their sins. The “hardened convict with a heart of gold” trope puts heavy expectations on people trapped in the prison-industrial complex. Like Grace, upon release, they may have no resources and are forced to depend on the kindness of strangers to get a new start. Like Grace, they put on different faces for different people. They’ve also reached catharsis, but hopefully their bold confessions won’t end the way Grace does—being quietly tucked away on a farm.

The desire for narratives about a “deserving poor” permeate society, especially when it comes to women. The meek, industrious Grace is a poster child for penal reform. But she’s not the only lower-class woman used as a political instrument. The virtuous single mother becomes a tool in Republican tax propaganda, mothers of disabled children are marked as tragedies in the health care debate, the sex work “rescue” industry is a thriving business, and annual Christmas charity appeals lean heavily on iconography of low-income women struggling to do their best, even as the “welfare queen” or “disability scrounger” is demonized. Even the use of quilts as a constant reference is extremely calculated.

Grace quilts together bits and pieces of her story, engaged in a metaphorical reflection of an historically feminized art form. Women, Grace  knows, must be adept at turning scraps into something beautiful that will please the viewer, while embedding sly secrets within to avoid the feeling of suffocation that comes with constantly being forced to build things for others. Her physical labors warm those in positions of power over her, while her emotional labor affirms their beliefs about her and society at large. While Grace seems powerless, trapped in an endless cycle of patriarchal abuse, our contemporary world sometimes feels the same. But women are stepping forward to accuse Hollywood darlings, politicians, media figures, and many more of sexual abuse. Evidently they’re tired of being Graces, and they’re finished with “the usual.” They’re quilting for themselves now.