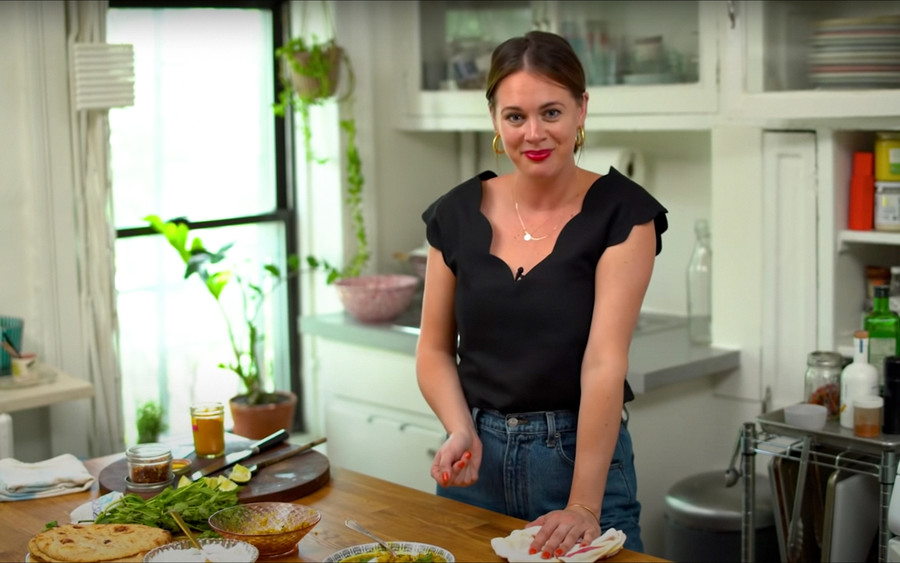 Cook, columnist, and author, Alison Roman, demonstrates how to make “The Stew” in a video for NYT Cooking (Photo credit: Screenshot from YouTube/NYT Cooking)

Cookbook author and food personality Alison Roman recently faced backlash for comments she made in an interview with the New Consumer in which she criticized lifestyle author and personality Marie Kondo (who has already been the target of racism), as well as model, celebrity personality, and cookbook author Chrissy Teigen, referring to them as sellouts and “content farmers.” Of Teigen, she said, “She has an Instagram page that has over a million followers where it’s just, like, people running a content farm for her,” and of Kondo, she noted, “Marie Kondo decided to capitalize on her fame and make stuff that you can buy, that is completely antithetical to everything she’s ever taught you…I’m like, damn, bitch, you fucking just sold out immediately!” Teigen responded in a series of tweets stating that she was hurt by the comments because they dismissed how hard she works. “This is a huge bummer and hit me hard,” she tweeted. “ I have made her recipes for years now, bought the cookbooks, supported her on social, and praised her in interviews.”

Given Roman, Teigen, and Kondo’s popularity and the public nature of their exchange, the incident was treated more like run-of-the-mill drama rather than what it really was: a clear-cut display of how food media enables white people to profit off the work and traditions of people of color while also invalidating the work of people of color in the food industry. Roman criticized two women of color for using their popularity to sell products, though she announced in the same interview that she was designing a collection of kitchen tools and creating a television show. Though Teigen and Kondo are both popular, they’re perhaps not the people who best illustrate Roman’s point. As writer Michelle Das noted on Twitter, criticism may have been more suited toward people like Gwyneth Paltrow, who Roman brought up earlier in the interview as an example of someone running a successful brand, but did not criticize. “Says a lot about who she thinks is allowed to build global empires,” Das comments.

In addition to the hypocrisy in Roman’s comments, her undue criticisms of two Asian women are hard to separate from the fact that Roman has refused to acknowledge that her own viral recipes are inspired by Asian cooking. For example, writer Ahmed Ali Akbar pointed out on Twitter how recipes like Roman’s popular chickpea stew “disconnect techniques from their cultural background” because of the lack of credit given to where the flavors come from.

But in a Jezebel profile, Roman dismissed the criticisms, saying, “I’m not from a culture that knows about curry…I come from no culture. I have no culture. I’m like, vaguely European.” By positioning herself as neither belonging to nor confined by any cultural traditions, and thereby somehow neutral, Roman attempts to evade the valid criticisms leveled at the vagueness of the dish.

This neutrality is the same mechanism that allowed Roman to participate as the host of a grossly exoticizing eight-day food tour of Vietnam, a sold-out trip hosted by Modern Adventure with an itinerary including activities like “wander ancient lanes” and “kayak past rice fields”—both dreamy, orientalist, and othering takes. Set against a backdrop of “inspiration” and “adventure,” the trip appropriates Vietnamese culture and practices for Western consumers, and Roman leads it despite it being her first visit to Vietnam. White chefs and food personalities in the media could use their popularity and privilege to uplift people of color in the industry, but far too often, they’re allowed to position themselves as authorities regarding cuisines about which they know next to nothing.

The issue here doesn’t lie with Roman cooking “outside” of her culture. Instead, the way that Roman is given a pass to be inspired by the cuisines of racialized people, and the fact that she is not expected to cook only European foods, is something that the food industry specifically creates space for white people to do—but not people of color. In 2017, Khushbu Shah’s GQ article titled “What Happens When a Brown Chef Cooks White Food?”discussed how racialized chefs face an uphill battle, constantly having to prove themselves when trying to cook dishes that don’t match their cultural backgrounds. “Chefs of color in the U.S….struggle to out-cook the assumptions that come with the color of their skin,” Shah wrote. “Even if you’ve been trained in classic French cooking, your restaurant has to be a reflection of how you look.”

Shah also quotes Edouardo Jordan, a Black chef who was concerned about opening an eatery serving up Southern dishes. “Would I actually get respect cooking something that is always seen as a lower cuisine?” Jordan asked. “I wanted to be an inspiration to my community, but I also didn’t want to become that Black chef that opened up that Black restaurant.” Not only are racialized chefs pigeonholed into cuisines associated with their backgrounds in a way that never happens to white food personalities, but the incessant stereotyping can even prevent chefs of color from practicing their own cultural cooking without feeling guilty.

There’s a lot to learn from this incident, which was treated as a small scandal instead of a chance to reflect on the ways that whiteness and white privilege are endemic in food media.

And then, there’s the recipe itself—people have been cooking things like Roman’s stew, basically a chana masala, for ages. But South Asian cuisine is often diminished in the dishes inspired by it. The vastness, complexity, and innovation of South Asian food is diluted over and over again in food media: If you search “Indian” on New York Times Cooking, the results show many recipes that are not actual Indian dishes, but rather fusion dishes like “Indian-spiced Tomato and Egg Casserole” and “Indian-style Split Pea Fritters.” Meanwhile, we see complicated, traditional, multistep French, Italian, and other European recipes that sometimes take days to create constantly being presented with pride and care by NYT Cooking, Bon Appetit, and other food-focused publications.

“Authenticity” is not the concern here; we should take issue with how staunchly people defend the careful application of European traditions in cooking without offering the same care and understanding to the traditions of racialized people. This double standard creates an environment in which the histories and cultures behind some cuisines are more respected than others. As Roxana Hadadi wrote in a recent article for Pajiba, separating ethnic dishes from their roots allows white food personalities not only to take credit, but also to “play to a certain kind of reader.” By repackaging chana masala or the other dishes the chickpea stew may have been inspired by, Roman introduces her devout audience to flavors and spices that might otherwise face pushback for being “too ethnic.”

After the initial frenzy surrounding the exchange between Roman and Teigen died down, people seemed to move on quickly. Roman posted a long apology note, and Teigen publicly accepted it; Roman’s NYT food column went “on hiatus.” Initially, more people seemed to be criticizing Teigen than Roman—no doubt because her internet presence is much larger and often polarizing—but we should be able to recognize that Teigen was hurt in this situation. There’s a lot to learn from this incident, which was treated as a small scandal instead of a chance to reflect on the ways that whiteness and white privilege are endemic in food media. Consequently, we continue to enable the conditions in the food industry that marginalize chefs and food personalities of color. And that should leave a bad taste in all of our mouths.

Read this Next: The Fried Chicken Dilemma