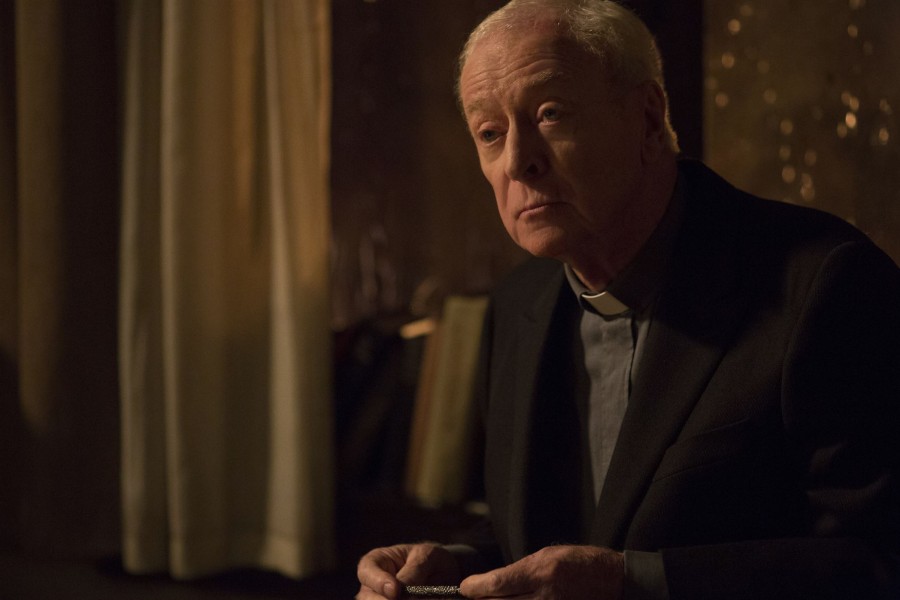 Michael Caine, seen here in the 2015 film The Last Witch Hunter, is one of several famous actors who have been dismissive of #OscarsSoWhite.

In the weeks since the Academy announced its all-white acting nominations, a bevy of white celebrities have commented on the #OscarsSoWhite controversy. Aside from ruining their publicists' days, these remarks highlight the pervasive, yet often subtle, white supremacy that courses through the film industry—especially when we consider that this is the second year in a row that the Oscars have had an all-white slate of acting nominees.

Here's a list I've compiled of the worst responses (so far) to #OscarsSoWhite. Since there's still an entire week before the awards show airs, let's hope I won't have to write another list of dismissive and racist quotes before the month is over. And fingers crossed that the ceremony doesn't include a repeat of this White Feminist moment.

“It is racist against whites. One can never really know, but sometimes maybe Black actors did not deserve to make the final list.” - Charlotte Rampling

The context: I’m inclined to say, “Screw the context!” because any time a white person claims something is “racist against whites” and that perhaps people of color don’t “deserve” accolades within a white-dominant industry, I don’t necessarily need a frame of reference to understand that this person is awful. In this case, first-time Oscar nominee and 45 Years star Charlotte Rampling said this in response to being asked about Black actors who boycotting of the awards show.

No, Ms. Rampling, it’s not “racist against whites” for Black actors to boycott an institution and an industry that routinely discriminates against them. I hope there’s a dictionary in your Oscars party gift basket to help you choose the correct words when you’re expressing your bigotry.

Speaking of racism, by saying that “maybe Black actors did not deserve to make the final list” ignores very real systemic racism that marginalizes voices of color in the film industry and not-so-subtly hints at white supremacist ideas that white actors are simply better at this acting stuff and it’s too bad that Black actors aren’t talented enough.

“Be patient, of course it will come. It took me years to get an Oscar.” -Michael Caine

The context: When asked about the all-white nominees, Caine said, “There’s loads of black actors. In the end you can't vote for an actor because he's black. You can't say 'I'm going to vote for him, he's not very good, but he's black, I'll vote for him'.”

It’s easy for Caine, who has received six nominations and two Academy Awards, to tell actors of color to patiently wait their turn. He doesn’t face the same barriers in a white-dominant industry and culture that, at best, tokenizes voices of color. It's worth noting that in the 87 years since the Academy Awards began, only 14 men and women of color have won acting awards. I imagine Caine and Rampling get together for clueless white actor tea time, where they chat about gardening, Masterpiece Theater, and “those people.”

The context: Streep, the president of an all-white jury panel at the Berlin International Film Festival, was asked if she could relate to films from regions that she’s unfamiliar with, like Africa and the Middle East. “The thing that I notice is that there is a core of humanity that travels right through every culture,” she said. “And after all, we're all from Africa originally, you know.”

While she meant it as a kumbaya humans-should-all-respect-each-other statement, the idea that we're all Africans ignores the very real anti-Black sentiments that exist in the US and Europe. This ridiculous comment comes too soon after her photoshoot in support of the (very white) historical film Suffragette, where she posed in a t-shirt that read, “I’d rather be a rebel than a slave.” Meryl is setting off my White Feminism alarm, although she doesn’t identify as a feminist and calls herself a humanist instead—which is honestly a pretty White Feminist thing to claim.  UPDATE 2/22: The outlet that reported these comments posted a clarification last week that they weren't made in response to a question specifically about whiteness in the film industry—it was part of Streep's reply to a question about African and Middle Eastern films. But the phrase “we are all Africans” still reflects an industry-wide “color-blindness” that does nothing to increase inclusivity.

“I sometimes wish I was African American, at least people don’t bash them afterward when they say something.”- Julie Delpy

The context: While at the Sundance Film Festival to promote the upcoming (very white) film, Wiener-Dog, an interviewer asked her about the Hollywood diversity controversy. The two-time Oscar nominee for the (very white) films Before Sunset and Before Midnight recalled being attacked by the media years ago when she called out the industry for being dominated by white men. She followed this by claiming that Black people can openly talk about the racism they face without receiving backlash.

Is Delpy living in a make-believe world where Black folks don’t face backlash for speaking out about anti-blackness? At a time where a movement like Black Lives Matter is so necessary—and so often rebuked with the snarl of “all lives matter”—Delpy’s remark diminishes the real lived experiences of African Americans. But if she’s really so tired of being a white woman, I bet that somewhere there's a Rachel Dolezal biopic in the works and the producers could get in touch with Delpy’s people.

“The Oscars are not that important.” - Joel Coen

The context: During an interview with Jen Yamato of the Daily Beast to promote their latest (very white) film Hail, Caesar!, the Coen brothers didn’t hide their impatience around talk of diversity. When Yamato asked if it was important to “consciously factor in concerns like diversity,” Ethan Coen replied, “Not in the least!” Joel went on to say that the question was “idiotic” because it didn’t take into account how storytelling works.

As a filmmaking team, Joel and Ethan Coen have each won four Oscars and snagged 13 nominations. From that lofty vantage point, it's easy—and arrogant—to claim that winning an Academy Award is unimportant. In an industry dominated by white dudes where there is space for multiple filmmaking teams made up of literal bros, the Coens’ flippant attitude toward inclusivity frames diversity as if it were a quota system where filmmakers are urged to cast people of color without regard to the story. This ignores the power dynamic of who gets to tells stories and who has been historically shut out of the film industry. You’d think their good pal, and socially aware white guy, George Clooney would have a talk with them about how systemic oppression works.

“All I know is there's thousands of people in the Academy, and the majority of them haven't won Oscars. A lot of people are crying, I guess.” - Clint Eastwood

The context: When a TMZ videographer asked him about the all-white nominees, Eastwood initially responded that he didn’t know anything about the controversy. But he clearly still felt informed enough to be snarky.

A prolific Oscar-nominee and industry veteran doesn’t give a hoot about this whole mess? No surprise, since he has benefitted greatly from the system.

The context: On his own show, Real Time with Bill Maher, HBO’s most celebrated Islamaphobe claimed that the real blame for the lack of the film industry's diversity was not, oh, that 96 percent of major film studios are run by white men. No, the people to blame for the lack of diversity are Chinese filmgoers who, he says, “don’t want to see Black people in their movies.”

Maher overestates the influence—and racism—of foreign audiences and how that intersects with what kinds of films are made stateside. By his logic, only all-white gigantic superhero blockbusters would be made and Robert Downey Jr. would be knee-deep in Tony Stark Oscars.

“I think it’s unfair to attack the Academy. It just so happened this year, it went that way.” - Helen Mirren

The context: In an interview Mirren continued, “I’m saying that the issue we need to be looking at is what happens before the film gets to the Oscars, what kinds of films are made and the way in which they’re cast, and the scripts.”

While Dame Helen, who has won one Oscar and had four nominations, offers a more sensible and nuanced look at Hollywood as a whole, this statement ignores the fact that the Academy Awards reinforce and celebrate industry-wide practices of discrimination of people of color and women. And it didn’t “just so happen this year,” because it also happened last year and in many previous years.

“Let’s face it, the Oscar membership is mainly old, white men. That’s the fact of it. Either you wait for them all to die, or kill them off slowly. There’s so many options, aren’t there?” - Emma Thompson

I couldn't end this list without offering a semblance of hope. There have been a handful of white celebrities who have managed to keep their feet out of their mouths, but Thompson's remarks are something I can stand by. Thank you, Emma, for being a sensible white celebrity.

Want more? We talk about #OscarsSoWhite on the most recent episode of our Backtalk podcast.

Leave it to the fabulous Emma Thompson to say something intelligent, and once again to stand apart in excellence, from her peers. :)