by Andi Zeisler and Cate Young 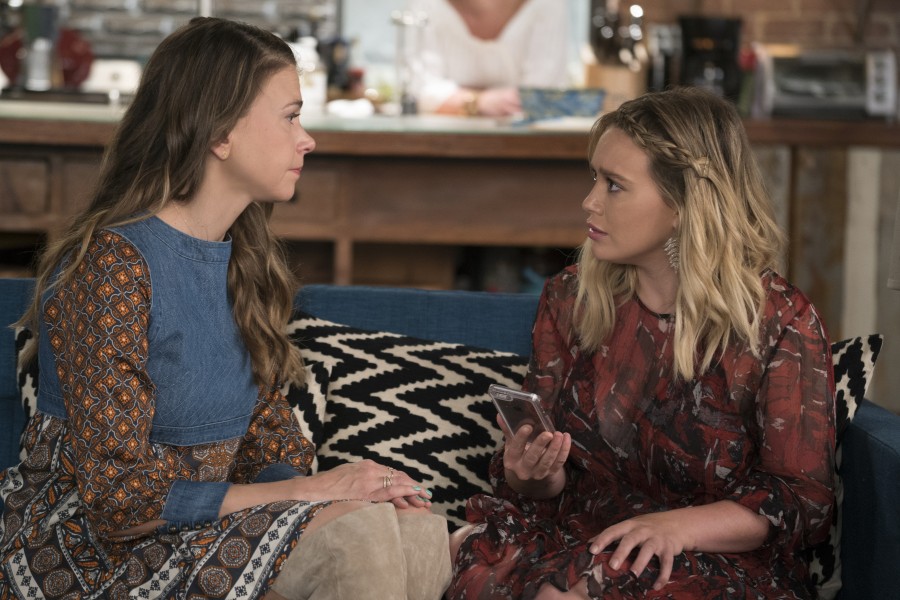 When you’re a book, magazine, or publishing nerd, there’s nothing quite so satisfying as a TV show that tries to get it right. Whether TV Land’s Younger is that show is still up for debate, but in its previous three seasons, the show has made for enjoyably wacky viewing with a healthy dose of pointed book-publishing critique.

The premise of the show involves Liza Miller, a recently divorced New Jersey housewife who, at age 41, reinvents herself as a perky millennial in order to get around the inevitable ageism of the publishing world and rebuild the career she left behind as a twentysomething.. Hijinks ensue, complications arise, and acts of god miraculously prevent Lisa’s secrets from spilling into the halls of the fictional Empirical publishing house. But as season 4 began earlier this month, shit’s getting real—season 3 ended on a cliffhanger, with Liza finally fessing up to her actual-twentysomething coworker/friend Kelsey—and Younger enthusiasts Cate Young and Andi Zeisler tuned in to see where things go now that the truth is (kind of) out there.

Andi Zeisler: I love that, with the first three episodes at least, the focus is on how Liza’s confession has put both her friendship and her working relationship with Kelsey in jeopardy. The last two seasons were so much about Liza’s love predicaments (young hot tattoo artist or older but equally gorge publishing exec, UGH WHAT A CONUNDRUM) that it feels right to explore how her lies affect Kelsey’s ability to trust her.

I also loved the introduction of some work drama in the form of Liza’s job offer from a rival publishing house. First off, I live for publishing-industry intrigue, which is a big part of what’s great about Younger to begin with. Second, I love Aasif Mandvi, and you know this drama will continue because you don’t just put him in your show if he’s not gonna have some kind of arc.

Cate Young: I completely agree about the fallout from Liza’s confession and I especially love that they’ve allowed Kelsey to be angry and to lash out. It’s easy to see Kelsey as the spoiled millennial brat who is acting out because of interpersonal drama, but well-intentioned as she was, Liza endangered all the hard work that Kelsey has done up to this point, including buying that Entertainment Weekly writer’s book about Labradoodles to protect her secret. Kelsey might be young, but she’s clearly a bright and intelligent young woman who knows her stuff. It’s how she ended up with an imprint in the first place! I think it was appropriate to allow Kelsey some time to grieve the friendship she thought she had and to figure out how to recontextualize her relationship with someone she thought of as a peer and equal.

I’m also loving Diana’s more aggressive mentorship of Liza. In another life those two might have been fast friends. This is publishing so it’s not quite the same, but Younger has always given me vague Devil Wears Prada vibes in the way that it focuses on young professional women making their way upwards in their careers. What’s refreshing here is that instead of having the older boss be a dragon lady who’s jealous of the young and beautiful, she’s instead a little flighty and frazzled, but genuinely interested in helping the women beneath her to succeed.

AZ: Yeah, Diana really started out as a classic caricature of the woman who is successful in her career but an interpersonal disaster, but she’s become much more multifaceted. I loved the scene where she puts the kibosh on publishing a book by a thinly veiled Kellyanne Conway manqué named Marylynne Keller (nice naming work, show).

CY: Played by Kristen Chenoweth! I actually loved her appearance and her character’s narrative function. While Charles eventually decides he “doesn’t want to contribute to the idea that truth doesn’t matter,” I think it’s worth examining the idea that the truth isn’t always the best thing for everyone. The truth prevented Liza from getting back to the workforce. I find a lot of value in the idea that “the truth” isn’t the same as “the facts” because our individual experiences so often color our perspectives that it’s not only possibly but highly likely that two sets of people can have entirely contradictory takeaways. NPR’s Gene Demby has a great piece about this that I refer to often. Just because something is a fact doesn’t mean it’s an objective truth.

AZ: This may be my conflict aversion talking, but I really want this show to take a pass on having Josh and Kelsey hook up. Yes, it would provide serious drama—especially now that Liza and Kelsey have a still-fragile reconciliation—but it’s such a boring, cliché way to shit-stir.

CY: Gonna have to disagree there. I am LIVING for the inevitable Kelsey/Josh hookup. It’s gonna happen and I can feel it in my bones! Josh is a great guy, but his relationship with Liza has always been complicated because of her lie. Him being with Kelsey solves both their relationship issues (stop pretending you didn’t see their intense chemistry) and frees Liza up to be with Charles once everything shakes out. He’s a little boring, but Charles is a great guy too, and he’s obviously been taken with Liza from the very beginning.

Didn’t love Lauren’s casual “in some cultures they call that rape” line that was played for laughs. Granted, Liza pushed back a bit, but without any real social consequences it’s just a bad joke that will eventually be repeated.

LOVE TO HATE IT

AZ: I want to start by saying that Debi Mazar could walk into a room and do nothing but pee on the floor and it would still be compelling, but I’m really mixed on the way her character is portrayed in terms of romances. I liked the goofiness of her relationship with Lauren, but portraying her as only lusting after young, straight kittens feels like a cop-out, not to mention kind of creepy.

CY: The entire interaction with her new assistant made me a little uncomfortable. It struck me as odd that we’re supposed to be okay with her aggressively hitting on a young woman who clearly idolizes her and is now working beneath her. It’s the kind of dynamic that would immediately be flagged as a problem were that character male.

AZ: One of my favorite things about Younger is how it mixes real-life literary and publishing references with fictional ones. I honestly still laugh about the Season 1 subplot involving a Swedish writer based on Karl Ove Knausgaard who tells Kelsey that she has “a vagina as soft as a walrus’s fold,” and of course “Edward L.L. Moore” and his Crown of Kings series. The nod to Kellyanne Conway was great, and I’m really hoping for at least one Milo Yiannopoulos burn this season.

CY: I couldn’t stop laughing at the “what is a meme” conversation. Liza’s references are always so dated that it’s a nice little shoutout to the viewers who’ve always known her secret. Having Kelsey frustratedly try to explain the concept to a bunch of olds without being able to articulate something she’s always been fluent in was enjoyable because it looked exactly the way my conversations with my mom go when I try to explain how Twitter works.

CY: Revealing her secret to Kelsey is probably enough for this season, but as the circle widens, I’m counting down to when Charles finds out. I think it’s clear the show means for him to end up with Liza, but given his little “the truth isn’t flexible” speech I don’t think he’ll be as forgiving as Kelsey.

I also hope more attention is given to really exploring why Liza made this choice in the first place. Granted, a lot of that is already tied up in the conceit of the show, and Liza mentioned it in passing when confessing to Kelsey, but I’d like Kelsey specifically to have to reckon with what it means to grow older as a woman when your personal and professional worth is tied to your youth.

AZ: Such a good point. I’m also wondering how it’s going to be if (when?) Charles finds out about Liza’s deception, either from her or from someone else. I think the show has been pretty circumspect in portraying what is undoubtedly a dicey relationship—I mean, not only is the Liza he knows only 26, but she’s also his employee. It would be understandable for him to be shocked to find out her true age, but what if it also reveals that he’s not interested in a 40-year-old woman? Would that make him a less sympathetic character?

CY: Less of a lie, and more of a secret, but I wonder if we’ll ever get resolution on the Diana’s-in love-with-Charles-from-afar front? I don’t think they’re a good match, but I’d love to see them try to work at a relationship, only to have them amicably decide they’re better as friends. I’ve always kind of hated the ways Diana gets silly around him and I’d love to have them get to a more intimate level of friendship that’s more relaxed and on equal terms.

AZ: I like that Diana is in a relationship now that hasn’t changed her personality. She’s still prickly and weird and full-on insecure in some ways, but she’s also able to be real and honest with her guy in a way she probably never would with Charles. I agree that seeing them interact and work together would be satisfying.

As a mother, the one thing about Younger that’s hard for me to reconcile is Liza’s daughter remaining in the dark about a massive lie that requires constant upkeep. The scene where Liza finds out that Caitlin’s in the hospital was a vehicle for Kelsey to start forgiving Liza because she sees how devoted a mother she is. But I think it also functioned as a “Is this all worth it?” moment where Liza understands that though she started this deceit in order to support her daughter, it’s putting their relationship in jeopardy.

CY: I’ve always been Team Josh, but the scene where he two-step dances with Kelsey in their apartment made me completely swoon. I’ve always wished partnered dancing was still a bit more mainstream. There’s something inherently romantic about it to me, which might be why I’m all aboard the Josh-and-Kelsey train.