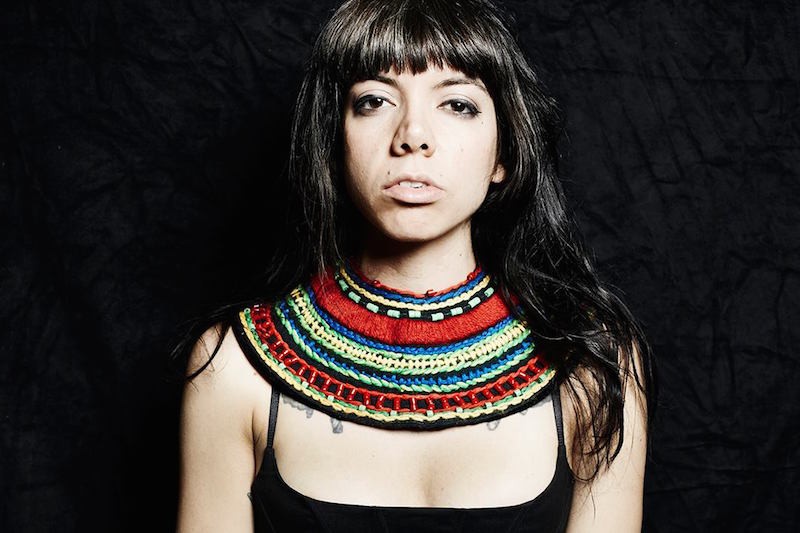 When Alynda Segarra performs these days, she drapes the stage with two flags: a rainbow flag and a Puerto Rican flag. Putting her identity as a queer woman of Puerto Rican descent front and center is important for Segarra, who fronts the politically minded folk-blues band Hurray for the Riff Raff. Even if the people dancing along to the tunes don’t always get the depth of her lyrics, the flags are an unmistakable symbol of pride. Segarra has been a punk ever since she was a teenager growing up in the Bronx, and in her upcoming album, The Navigator, her politics and exploration of identity are more pronounced than ever before. The album, which will debut in February, is essentially a concept album about gentrification, Segarra explained to me after her performance at Pickathon, a music festival in Happy Valley, Oregon, last weekend. 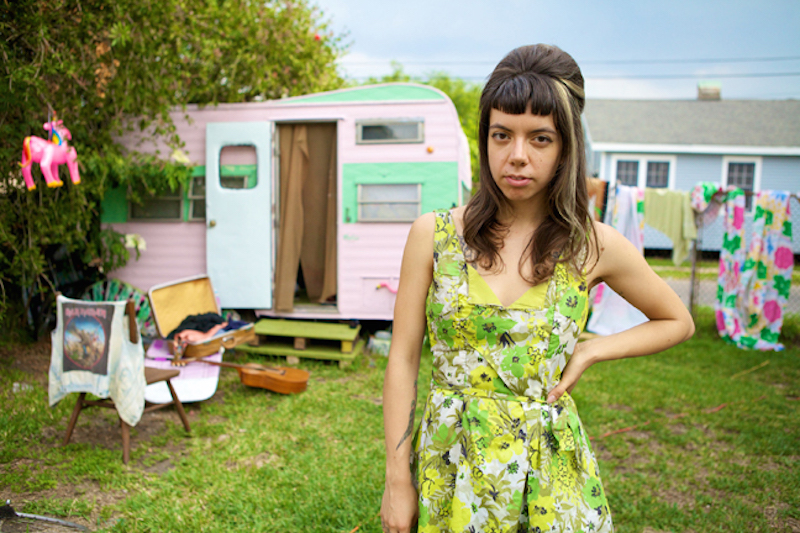 Can you tell me about the song “Rican Beach”? To me, it felt like the song is very clearly about cultural appropriation and gentrification.

Yes, you got it! “Rican Beach” is on the new record, and the new record is a lot about gentrification. I’ve been thinking a lot about New York, where I grew up, and how much it’s changing. Everywhere I go, every city is changing, and it feels like people of color are getting pushed out. And I thought, Wow, gentrification is the most nonmusical topic to write an album about. I should do that and prove it should be talked about. I think it’s the topic of our generation. None of us know what the hell is going on and our parents can’t help us. They’re like, “I dunno, everything changed!”

This album has helped me get a lot more in touch with Puerto Rican history. In New York, Puerto Ricans added so much to the culture. A lot of Puerto Ricans came to the city in the ‘40s, like my grandparents did, and a lot of that culture is being pushed out and erased. That song is about being pushed out of a place that’s your home. It’s a thing about living in the middle, the diaspora.

That song has a lot to do with the demonization right now of Latin people and immigrants. There’s a line that goes, “The politicians just squawk their mouths/ They say they’ll build a wall to keep them out/ And all the poets are dying of a silence disease/ So they did it quickly and with much ease.” If we continue to be silent about it, this building of hatred and fear. If there’s something that makes me cry, it’s hearing from, like, Mexican-American people about how their families have been here for six, seven generations and they’re being told by racists to go back to where they came from, and they’re like, “I’m fucking from here, dude!” So that song is really heavy for me. It really, for me, was about a city changing and feeling like your people are getting pushed out and you don’t know where to go, you don’t know where you belong because your ancestry is in so many different places.

There’s a lot in there about losing your culture throughout the generations because you’re trying to assimilate, like my family did. Like, I don’t know how to speak Spanish, you know? And I’m trying to gain that back. But it’s not my parents’ fault that they didn’t teach me Spanish; they felt like they had to assimilate.

Does it feel really heavy for you to sing that song in front of a crowd? I think it would be really tricky to play that song at a festival where people are singing and having a good time—you’d want to be like, “Hey, this is a song about gentrification.”

It’s been really interesting; we just started playing it the last two tours. I started playing it when we were in England, which is weird, but I thought it was really important because Brexit had just happened. I tried to say, “This is a cautionary tale.” I’ve been feeling way more powerful these days. I used to feel really scared and vulnerable. And I still feel vulnerable, but something has happened to me while making this album that I feel, like, responsibility to my ancestors to be strong and be like, I am here, and I’m telling you this story. You might be dancing and not getting it, but that’s fine, and I’m not going to let that hurt me. I’m a storyteller. I try not to focus on the people who are drunk and not getting it. There’s so much more going on with my performance—I’m doing it for my grandma, you know?

Where do you think that power comes from? What changed?

This winter was really interesting for me, personally. I moved away from New Orleans a year and a half ago, and that was the first time I really moved away from my friends and musical community. I really just wanted to try something new. New Orleans, the city itself, felt like my friend. So I moved to Nashville. It was just a lonely time period that was a really good time to just be alone and think about my history and think about what I want to do with my life. I think it’s really important for women to go through that, because I maybe wouldn’t have if I wasn’t forced to. If I didn’t have the choice, I might just be, like, in a relationship forever.

I don’t know how it is for other women, but for me, when I’m in a straight relationship—even though I’m queer, when I’m dating a straight man—I’ve always felt this nagging voice in my head that’s just like, You could just, like, be their wife. It might be easier. You could just not really do your thing. You have this weird choice where you could just, like, take the other colored pill and give up on your dreams. The world is so hard, and being a woman who has a dream is so fucking hard, especially as a woman of color. So I’ve always felt that nagging choice, and it wasn’t until I turned 29 that it was like, You can never make that choice. It became more cemented. I feel like I wasn’t quite sure before. And then I made this album, and during the recording, I felt like it was going to be difficult, but I was going to be a female artist, whatever that means.

Right! And it might drive you crazy sometimes and be so painful sometimes, but it became cemented. This is what I want to fucking do. It was not giving up on the art itself for comfort and domesticity, for being comfortable and never alone.

When I was 20, I thought that as I got older I would get more apathetic and more stagnant and more set in a life. But actually it’s been the opposite. Now I’m almost 30, and I’m more strident and more upset and more passionate than ever. I think that’s a good thing.

My bassist Caitlin [Gray] was saying the same thing. There’s this feeling that we’re inheriting the world. We’re at this age where we’re like, We’re going to have to take care of this baby planet pretty soon. We’re in such an important time period. We’re thinking about the younger generation, and we’re thinking about the elders, and it’s a really emotional time. I’m more upset than ever! I’ve actually had a lot of moments where I’m like, I was not wrong when I was 14!

I was a punk 14-year-old, and I had so many moments as a teenager when I would tell adults, “This is going to fucking crumble,” and they were like, “No, you don’t know what you’re talking about.” And now I’m like, it was all a lie! The Dead Kennedys were right!

Yeah, definitely the way I expressed those feelings was through terrible poetry, and that poetry is still not good. But my heart was in the right place. I like to listen to angry teens; I think they’re usually spot-on. Maybe their means of expressing it are not the most eloquent, but teens are good at pointing out when things are unacceptable and should change.

They’re worried about their future and they feel like the decisions are out of their hands. I think when the decision is in our hands, finally, we’re like, “Uh oh.” When I was a teenager, I was really into slam poetry, and now I’m like, that fucking saved me. Young kids doing that, I don’t care how corny it is, that’s important. Especially for young kids of color, to have that place to get onstage and say everything they’re afraid of for the future is so important. I think people that talk shit on it are just too jaded.

I think teenagers connect with slam poetry because it’s often really sincere. It can be political and confrontational but also really earnest. And that’s why people make fun of it, but that’s also what makes it resonate.

I’m so sick of people being cool. I can’t take it anymore. When I see someone being nonchalant onstage these days, I’m like, “Wow, must be fuckin’ nice to go onstage and pretend everything’s fine.” It’s not! It’s fucking not fine!

So tell me about the new album you’re working on. When does it come out?

It’s called The Navigator. It’s a concept album. I take on this character, who’s very much me, who’s growing up in a city that’s a lot like New York. I grew up in the projects with my aunt and uncle, and I feel like I was ashamed about my family a lot. I don’t know why, but I just felt nervous and embarrassed about my background—I didn’t think Puerto Rican was cool for some reason. The album is about a girl growing up with a lot of that shame. It’s about growing up in a big city; it’s a lot about the classism and racism that a lot of big-city kids experience. Then she visits this witchy woman and says, “I want to wake up and not recognize anything around me.” So this woman puts her in a spell where she goes to sleep for 40 or 50 years and when she wakes up, because of gentrification, everything is gone. She can’t recognize anyone. And she starts to realize what she lost. She’s the navigator; she needs to figure out how to navigate her gender identity, her sexual identity, class, and race and culture and everything, and find out where all of her people went.

Is that how you feel when you go back to the Bronx?

Yeah, it’s a lot about running away. I ran away as a teenager, and then when I came back, I was like, What the fuck was I thinking? It felt like everything was different. As I get older, I’m like, How could I have been ashamed of any of this? I’m so proud of my family, I’m so proud of where I came from, I’m so proud of my culture, and it boggles my mind that I could ever have been embarrassed.

Its beautiful connecting as a woman and as a Puertorican who lives in PR, I feel there is a thread that does connect us all. Many artists, fighting to keep that thread living...Thank you. 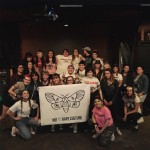