Amanda Knox is Not on Trial | Bitch Media

Amanda Knox is Not on Trial 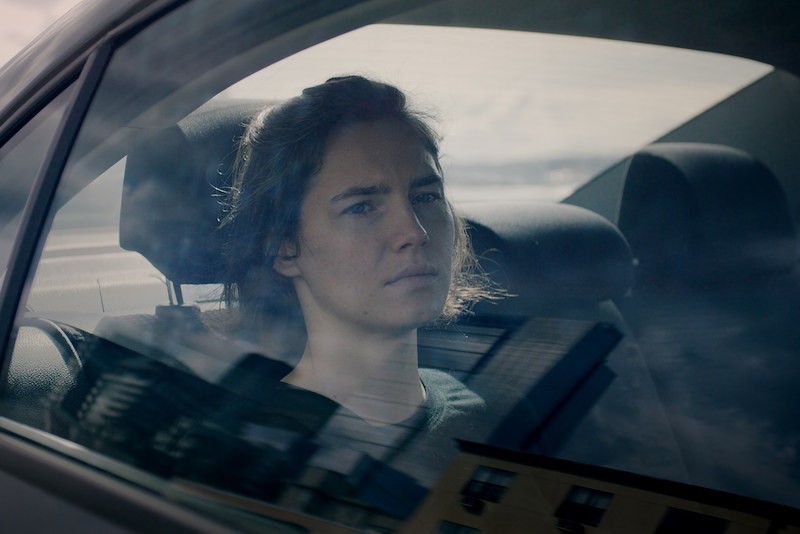 Amanda Knox found herself at the center of a sexist media firestorm after being charged with the murder of Mereditch Kercher in 2007. Photo courtesy Netflix.

In theory, objectivity seems like a good thing to aim for in journalism. But the deeper you go into any subject, the clearer it becomes that there’s no such thing as objectivity: Every situation, and every person’s opinion of it, will be shaped by the assumptions and personal history reporters bring the table. The case of the 2007 murder of British student Meredith Kercher in Italy and the subsequent trial of her American roommate, Amanda Knox, and her former boyfriend Raffaele Sollecito provided a high-profile example of the ways that bias—on the part of the police, the media, and the public—can influence the course of a murder investigation.

Netflix’s new original documentary Amanda Knox is a cruel and ineffective production because it aspires to neutrality—as if there were such a thing. The documentary frames the case as though the question of Knox’s guilt or innocence were still open for debate nine years later. Knox has been convicted twice and acquitted twice, the second by the highest court in Italy. Knox was dragged for years through a sexist media firestorm—tabloids dubbed her “Foxy Knoxy” and painted her as a “sex-crazed killer” who knew “no boundaries” because she owned a vibrator and had one-night stands. After it all, the court acquitted her and criticized the Italian police for “stunning flaws” in their investigation. But the directors of the new documentary have made it seem as though Knox herself is teasing us with the question of her innocence: She opens with the line, “There are those who believe in my innocence, and there are those who believe in my guilt. There’s no in between.” In a ploy to manufacture suspense, the film fails to mention Knox’s double acquittal until the moment arrives chronologically in the story. 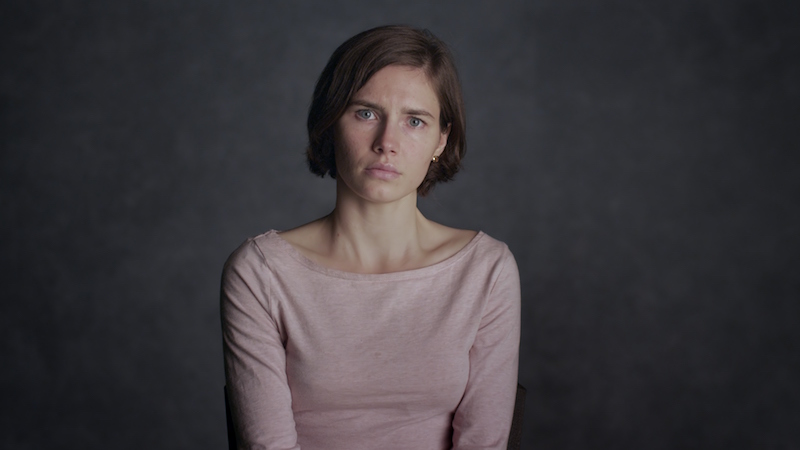 Amanda Knox has been acquitted… twice! But the new film examines her case as if it’s an open question. Photo courtest Netflix.

The more interesting aspects of the case and the media circus surrounding it—the sexism and misogyny in the way Knox was portrayed throughout the case, the ways that the nationalism and pride of the Italian police drove them to fabricate an incredibly unlikely explanation of the murder and then prosecute Knox for it, the differences between the Italian and American legal systems that allowed things to happen as they did—are generally left well enough alone by this film. The directors deserve credit for letting Knox speak for herself and for devoting a significant amount of time to the tabloid coverage of the case, but there’s little else of value here. Nine years after the fact, the film essentially amounts to one of those “Here’s What We Know About the Deadly Event So Far” stories we see after breaking news of bombings, shootings, and accidents. Most of the movie is devoted to the details of the murder and initial investigation, with significantly less attention given to the trials and appeals. The directors clearly want to “let the facts speak for themselves,” which is all well and good except for the fact that that’s neither useful nor interesting at this point.

It’s true that Knox and her then-boyfriend, Sollecito, acted strangely after the murder and during the investigation, raising suspicion. But Knox was essentially put on trial for being a sexually active unmarried woman and for not seeming upset enough about her housemate’s death. In the film, Giuliano Mignini, the case’s first prosecutor, describes the crime scene by saying, “A female murderer tends to cover the body of female victims. A man would never think to do this,” as though he’s divulging an important piece of evidence. Tabloid headlines about the case are presented mostly without comment, and viewers are left to reach their own conclusions about how media coverage impacted Knox’s years-long trial.

The film only hints at the real reason so many were compelled by this case: the fact that if a pretty white American college student could be falsely accused of murder and forced to spend years in prison for a crime she didn’t commit, it could happen to other white people too! “If I’m innocent, it means that everyone’s vulnerable, and that’s everyone’s nightmare,” she says. “Either I’m a psychopath in sheep’s clothing, or I am you.” It’s clear that this “you” refers to other privileged white women who generally enjoy safety and freedom from dealings with the criminal justice system—unlike Patrick Lumumba, the Congolese bar owner Knox falsely accused of committing Kercher’s murder. To her credit, Knox has since used her fame and privilege to become an advocate for the wrongfully accused, most of whom are people of color, by working with the Innocence Project. 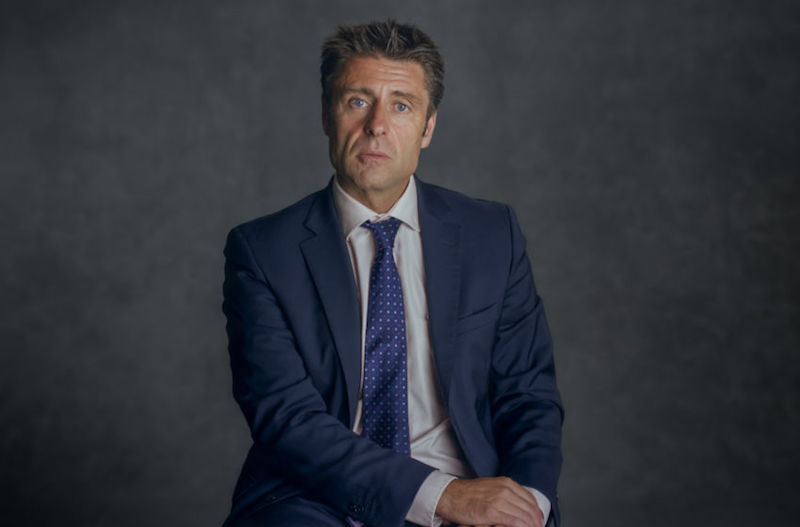 Nick Pisa, a journalist for the Daily Mail who was a major contributor to the media spectacle surrounding Knox, is the other main player in this film. He has a few useful contributions to the analysis of the case, but seems mostly loathsome and unrepentant about the role he played—and presumably continues to play in other sensationalist media coverage. He blames the police and prosecutors for missteps in the investigation and portrays journalism as a noble and blameless pursuit of the “scoop.” In real life, Pisa coined the name “Foxy Knoxy” and gained notoriety for publishing a leaked copy of Knox’s diary. In the film, he admits that he included photos from her Myspace to amp up the idea that she was “sex crazed.” He says:

“I think now, looking back, some of the information that came out was just crazy, really, and was just completely made up. But hey, what are we supposed to do, you know? We are journalists, and we are reporting what we are being told. It’s not as if I can say, ‘Right, hold on a minute, I just want to double check that myself in some other way,’—I mean, goodness knows how—and then I’ll let my rival get in there first before me and then, hey, I’ve lost a scoop. It doesn’t work like that, not in the news game.”

This is a pretty clear example of the difference between ethical and responsible journalism and crappy journalism that preys on our baser human instincts. Unfortunately, Amanda Knox veers more in the direction of reproducing a sensational story rather than providing valuable analysis of it.

Interesting perspective! It does sound like they're attempting to be unbiased, but leaving a lot of info out makes you question that. I want to say I'm okay with them taking an "unbiased" approach and letting viewers figure it out themselves, because I don't think it's wrong to do that... but leaving important information out makes me waver.

I am still inclined to watch the film though, because I don't know much about the case and I'm curious to see what the sensationalized bits of it are. I wonder if I'll be as frustrated as you are!

I think it was a very smart documentary, actually. Mainly, because it leaves the conclusions up to the viewer, and it ends up being very clear that all of the people involved, like the cop and the journalist, where pretty much guilty of all of the bad times Amanda Knox had to live through.

It´s not explicit, and I think that´s a good thing. It makes you think. Of course it is also told like a mistery that raises questions, confuses you and it builds up doubt to finally surprise you. Like any story should be told, after all it´s a movie.

But, at least from my point of view and of those who I´ve commented the documentary with, it is pretty clear that it was a messed up situation made up by the press, the really bad journalist wanting attention, a cop with a lot of bad judgement who wanted to be valued as a cool Sherlock Holmes, and the influence they all had on the public. And of course, the punishment given to a woman just for being beautiful.

They all fall for their own stupidity. And I think that´s brilliant.

Relevant: “The Misandrists” Offers a Muddled Critique of Radical Feminism 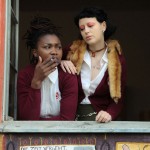 by Samantha Riedel
Is it possible to lampoon radical feminism and celebrate it at the same time?