Young and Free“The Bold Type” is the Perfect Summer Show 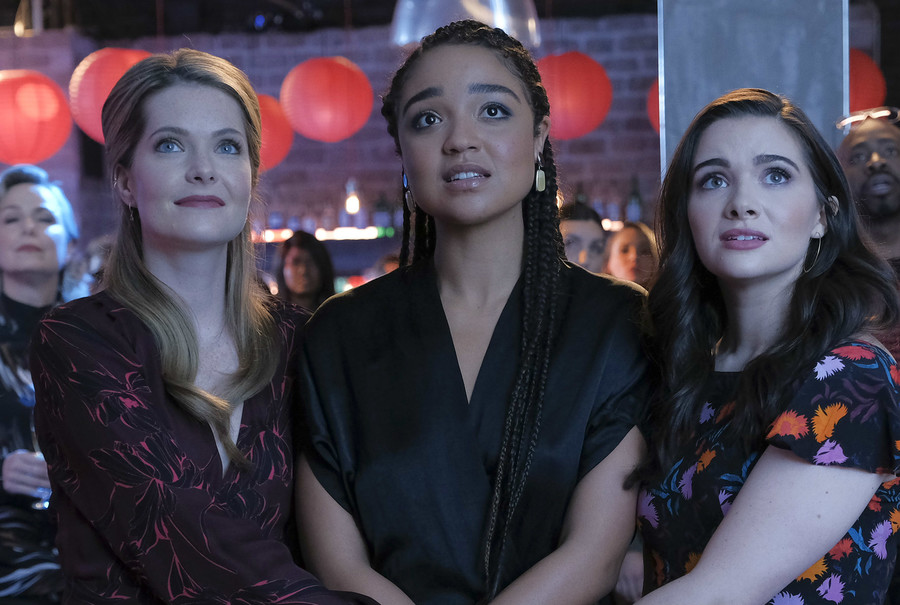 The Bold Type, Freeform’s popular drama about three friends navigating the glitzy, high-pressure world of fashion magazines, is the perfect summer show. In the vein of Younger, Sex & the City, How to Lose a Guy in 10 Days, Friends with Benefits, and other carefree TV shows and movies set in New York City’s journalism and publishing worlds, The Bold Type carefully balances heavier subjects, like abortion, xenophobia, and gentrification, with standard relationship drama, work troubles, and friendship squabbles. The show follows the parallel journeys of three best friends who are at various stages of their careers at Scarlet, a fashion magazine inspired by Cosmopolitan and other women’s publications that are attempting to balance fashion editorials with feminist content.

Staff writer Jane (Katie Stevens) has finally found her voice and broken a major story about abuse within the fashion industry. Kat (Aisha Dee), Scarlet’s mixed-race, queer social-media director, has set her sights on changing New York City’s political landscape. And Sutton’s (Meghann Fahy) torn between fashion design and fashion editing, which are conversations she’s having with her live-in boyfriend Richard (Sam Page), a Scarlet board member who’s more than 10 years older than her. Though Jane, Kat, and Sutton have a seemingly unending stream of problems to solve, their friendship—seen through ice cream-eating sessions at Jane’s apartment and impromptu meetings in Scarlet’s fashion closet—keeps them focused on what matters.

In the current season, Kat’s run and lost a city council race and is considering reconciling with an estranged girlfriend; Sutton’s entering into a long-distance relationship with Richard; and Jane’s reeling after learning that her boyfriend kissed another woman during his book tour. And in typical fashion, each episode is addressing and closing up their individual issues in delightful and fantastical ways that keep rom-com enthusiasts, like myself, tuning in each week. I spoke with showrunner Amanda Lasher about maintaining the show’s entertaining balance.

One of the themes throughout this season is the idea that, as Jane says in episode four, women can be just as abusive as men. There’s a Black councilman who supports gentrification and Scarlet’s gay digital director is very comfortable pushing a woman editor-in-chief out of a woman’s magazine. Is that intentional?

No, that’s not intentional. We don’t see Patrick, [Scarlet’s digital director], as a villain. He’s definitely an obstacle in many ways and has a different point of view, but [he’s] not necessarily a villain. And then in terms of what Jane says, we wanted to talk about abusive bosses because we have this wonderful example of a positive boss in Jacqueline. [She’s] so supportive and a true mentor. I’ve certainly had that experience, but I’ve also had [horrible bosses]—both men and women. It felt like an interesting conversation to have.

Who is Jacqueline modeled after? How did you create an archetype for such a supportive boss?

Joanna Coles, the former editor-in-chief of Cosmopolitan and a producer on the show, inspired Jacqueline. Coles is just lovely [and] supportive; she really empowers her staff and brings women up. She’s not the archetype, but she’s a good role model.

Kat is making big strides this season. In the first season, she was unsure about being queer, and in the second season, she was figuring out her ethnicity. This season, she’s taken ownership over who she is and her role in both in the magazine and the world. How did you envision Kat this season?

Kat has [never been] afraid to stand up for what’s right, but she had a lot of confusion [around] her personal identity [that she had to] sort out. As she became clearer and more confident, it felt organic for her to look around and want to fight for things that matter to her. The personal is political for Kat.

I’m intrigued by the storyline around gentrification leading to the closing of queer bars. What inspired that?

It’s real. There are very few lesbian bars in New York City, and [the ones that are still open] are suffering because of gentrification. These historic communities for people are going away [and] that was something we wanted to shine a light on. We’ve made so much progress in some ways, but there are still challenges. [Lesbian bars closing] is one of them.

We loved the idea of a queer prom because that wouldn’t have been an option for Kat when she in high school, even though she was not fully in touch with her sexuality at that point. Queer proms were sort of unheard of a few years ago, so having one on the show felt [like] something that Kat could really enjoy, get behind, and be a little wish fulfillment for her too.

This season there’s a lot of focus on reproductive justice and abortion access. Kat revealed that she had an abortion when she was 20. Jane froze her eggs because she has the BRCA gene. How important is it for The Bold Type to show young women making decisions about their reproductive health?

It’s huge, especially now. We wanted to normalize talking about abortion. We put it in an episode where it wasn’t this horrible, traumatic thing to shine a light on the shame around [the procedure]. Shame thrives in silence. As abortion rights are being scaled back, it’s important that people talk about how many people have had abortions [and their] reasons—the more we can demystify and normalize it, the better.

People tend to attach to the more controversial aspects of reproductive health, but there are so many different [ways] to take control over and be able to make choices about your reproductive health. We love that we’re able to talk about [reproductive health] on this show and normalize [it] as much as possible. More and more women are freezing their eggs. When we started working on that story, one of the [show’s] writers [was] going through it. An executive on the show made the decision to [freeze her eggs]. It’s very common now.

Since the first season, the show hasn’t really talked about Sutton’s class struggles. Is that something that the show is going to revisit?

[Class is] a filter that she looks at the world through, and it’s going to come up in her relationship with Richard. It already has with Sutton resisting letting Richard’s housekeeper wash her laundry. They come from such different backgrounds. We wanted to tell the laundry story because it’s such a simple thing that you don’t think about. Something like laundry reflects privilege and class in so many subtle and mundane ways. We wanted to shine a light on that. Sutton’s desire to be a designer comes with costs. There are costs, and there are advantages that some people have going into design that Sutton doesn’t necessarily have. She wrestles with that.