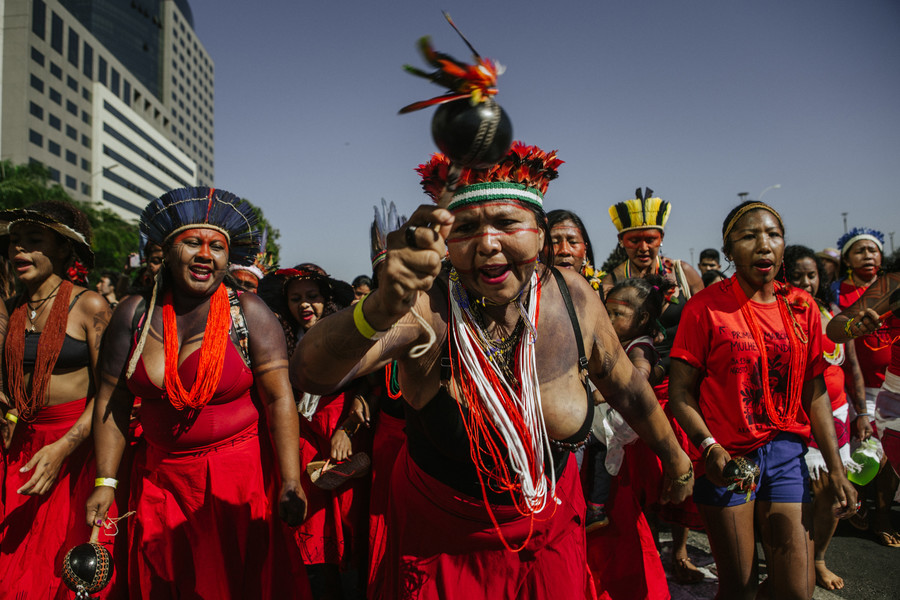 Indigenous women in Brazil take part in a protest against President Jair Bolsonaro’s environmental policies and the loss of their traditional settlements on August 13, 2019. Bolsonaro wants to make greater economic use of the Amazon region in particular and allow further deforestation. (Photo credit: Tuane Fernandes/Picture Alliance/Getty Images)

The Amazon rainforest is on fire and Brazil plans to reject the $22 million in aid pledged at the G7 summit because President Jair Bolsonaro believes it is a form of colonization and an invasion of Brazil’s “sovereignty.” In a series of tweets, Bolsonaro claimed that French President Emmanuel Macron and the G7’s language about saving the Amazon are “unreasonable attacks” as if “we were a colony or a no man’s land” and that Brazil should be treated like a sovereign nation. (Bolsonaro’s vowed to accept the aid if and when Macron retracts comments that he finds offensive, according to the Associated Press). What should be treated with sovereignty are Brazil’s Indigenous people, who have lived and worked in the Amazon for thousands of years before the Portuguese ever stepped foot in South America; instead, as Bolsonaro lets arrogance guide his decision-making, 10 percent of the Earth’s wildlife and Brazil’s Indigenous communities burn.

Though the fires initially led to a debate about the ongoing impact of climate change and how individuals can adopt more sustainable habits that could prevent similar fires, these dialogues ignore that these fires are neither natural nor related to climate change. The Amazon rainforest is too humid for natural wildfires, so this unnatural disaster can be attributed to soy farmers and cattle ranchers cutting down trees and lighting them aflame to create more land for their pastures. Bolsonaro, who ran an extremist far-right campaign, promised to weaken the Amazon’s environmental protections to make room for economic development. Since he was elected in October 2018, there’s been an 82 percent rise in fires in the Amazon rainforest, mostly because Bolsonaro’s policies have emboldened and encouraged land-grabbers to burn down more and more trees.

In an interview with Time, Fabiano Lopez da Silva, head of Fundação Vitoria Amazonica, an environmental organization unaffiliated with the Brazilian government, said Bolsonaro’s rhetoric stimulates illegal deforestation: “[Farmers and illegal loggers] can go forward with illegal fires,” Lopez de Silva said. “There won’t be any sort of [fiscal enforcement] or monitoring or fines for this kind of activity.”

Bolsonaro has been called the “Trump of the tropics,” due to his policies prioritizing his ego rather than the needs of his people, in addition to his weaponizing of nationalist rhetoric. He has been clear about his disrespect for Indigenous populations, and this disrespect specifically centers around the fact that, as a protected group, they live on protected territory that politicians and businesspeople can’t touch. According to the Washington Times, he’s said these groups “don’t speak our language, but they have managed to get 14 percent of our national territory.” It’s clear Bolsonaro’s disregard for Indigenous land rights and the ecosystem at large is rooted in capitalist desire. He has prioritized companies and industries whose financial success hinges on environmental destruction, thus lessening the land rights of Indigenous people, and removing efforts that seek to combat illegal logging, ranching and mining, all of which have detrimental impacts on the environment. “These people in the forest now think they can do whatever they like, with impunity,” said Elizabeth Uema, a representative of an association of public servants who work environmental jobs in Brazil, on NPR’s “Morning Edition.”

More deforestation creates a dangerous cycle: less trees mean less humidity, which means weather conditions will increasingly lead to wildfires. If the Amazon continues burning, hundreds of thousands of plants and animals will die and the Indigenous communities that rely on the Amazon for their basic necessities, like food and shelter, will suffer. Tashka Yawanawa, chief of the Indigenous Yawanawa people in Brazil, told CBS News’ Manuel Bojorquez that these fires as a form of genocide. As more details about the fire bubble to the surface, organizations have begun acting to save what can be saved and to prevent future wildfires. An organization called the Comisión de Derechos Humanos de los Pueblos Indígenas wrote an open letter urging the United Nations to take action before the fires lead to “extinction”:

“That the action of all the social, public and private actors in unity is necessary to intervene and put a stop to this threat against life in all its forms, which already have at imminent risk of extinction more than 506 Indigenous Peoples of the Amazon basin and the thousands of species of flora and fauna that inhabit them because of the 73,843 sources of fire that have incinerated more than 700,000 hectares of forest after almost 18 days of neglect and prevention; and that according to preliminary data there are more than 100,000 indigenous people affected.”

The letter also lays the blame for this catastrophe at the feet of Bolsonaro and Bolivian President Evo Morales—whose portion of the Amazon is also on fire, but to a lesser extent—because they disregard nature and Indigenous communities in favor of profit. The Amazon fires are another example of politicians prioritizing greed above caring for their constituents and protecting the people who inhabit the land they govern. It’s not a coincidence that the narrative around the fires focused on climate change rather than the politicized violence caused by politicians.

In a recent interview with Dazed, Rayanne Cristine Maximo Franca, an Indigenous woman from Brazil’s portion of the Amazon rainforest, described how this political violence and disrespect alongside climate endangerment, racism, sexism has made life a tough battle for any Indigenous woman in Bolivia or Brazil. “Women from the Amazon have been echoing a strong urge to act against fast-tracked consumerist needs that do not respect our lands, our culture, our rights,” she said. “Despite all the colonisation processes, there are Indigenous populations who fight to preserve their multifaceted identities.” It’s for this exact reason that thousands of Indigenous women took to the streets and marched in Brazil’s capital city two weeks ago.

These communities—people of color, women, children—will be on the front lines of the fight to end to climate change. Between 25 million and 1 billion people will become climate migrants “either within their countries or across borders” by 2050, according to the International Organization for Migration. Endangering entire ecosystems and exposing millions to droughts, sea levels rising, wildfires, and other climate consequences simply for economic gain (in addition to refusing aid because of misconstrued notions of how colonialism works and male ego) is foolish, violent, and criminal.

Read this Next: Fake Believe 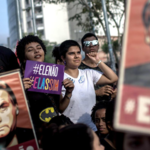 by Nicole Froio
This weekend’s runoff election is likely to result in a far-right extremist leader.