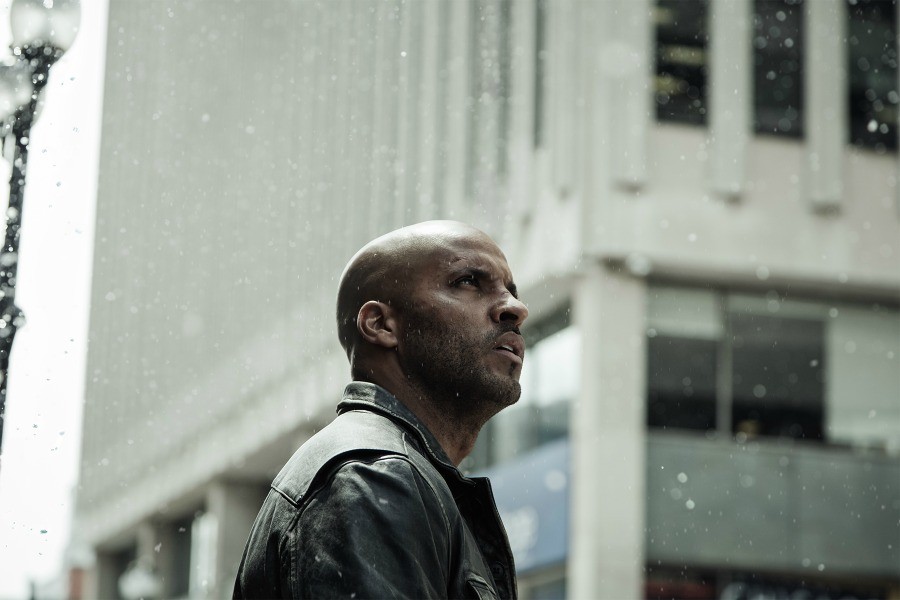 A grittier, darker take on Americana, American Gods captures sophisticated imagery in its depiction of bloodshed, vice, and the supernatural. The show introduces its mysterious protagonist, Shadow Moon (Ricky Whittle), as he lifts weights in a prison courtyard. When he’s released early to attend his wife and best friend’s funerals, he begins escaping into dream sequences, reminiscent of The Devil’s Advocate, that blur the lines between reality and fantasy. Soon, the audience learns that another enigmatic character, Mr. Wednesday (Ian McShane), is responsible for these sequences that draw Shadow Moon into a new realm of possibilities.

On the flight home, he encounters the mysterious Mr. Wednesday—a calm old fellow with cool blue eyes, a foul mouth, and a raspy voice—who convinces him to take a job as his bodyguard. Mr. Wednesday is in fact Odin, the one-eyed Norse god of knowledge and wisdom. Within the first few episodes, Mr. Wednesday is joined by a cast of other deities, including a jive trickster, an insatiable goddess, and a violent leprechaun. These characters find their ancient exalted status threatened by the new gods of technology and media, but American Gods lacks analysis about how media, technology, and race would impact a Black person, especially Shadow Moon, within a supernatural world. 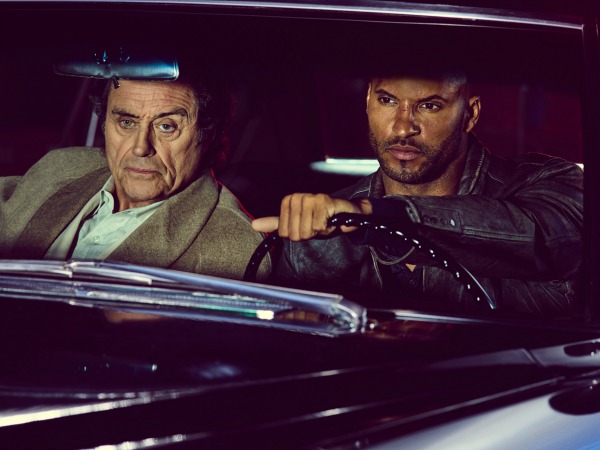 Shadow is clearly something other than white, but his blackness is only addressed in pithy one-liners via character dialogue. In the first episode, Shadow Moon imagines his wife (Emily Browning) in a light-filled, daydream sequence. However, instincts tell Shadow that all is not as well as it seems. “I’m not superstitious. I believe in plenty witnesses that give reason and evidence to believe. I don’t believe in anything I can’t see, but I feel like there’s a fucking axe hanging over my head. I can’t see it, but I believe it,” Shadow says. By the end of the first episode, Shadow hangs from a tree, lynched by Technical Boy, an antagonist in the series.

When Shadow tells Mr. Wednesday, “My ass was hanged from a fucking tree! Strange fruit,” the deity sidesteps the issue by pointing out that he survived. Is it possible that Technical Boy lynched Shadow as an extension of the story’s allegory? Or perhaps the scene is commentary on the troubling spectacle of Black death on social media, especially in the last several years of videotaped police violence. American Gods offers no answers in a scene that had far more potential to address the place of marginalized identities in technology. Each episode introduces a supernatural figure who has little connection to the overall arc. Anubis (Chris Obi) transitions souls between earth and other supernatural realms. Mad Sweeney (Pablo Schreiber) is a brawny leprechaun who plucks gold coins from the sky, and perhaps your nose, with an affinity for bar fights.

There’s also Bilquis (Yetide Badaki), a goddess of love who consumes her lovers, literally and figuratively. While Bilquis is utterly stunning, she’s incredibly underdeveloped. The stereotypical sexualization of Bilquis, who consumes entire people within her vagina, does not reveal anything new or challenge previously conceived ideas about Black women in America. Instead, Bilquis fulfills the “Jezebel” stereotype that portrays Black women as inherently promiscuous, and often insatiable. This depiction of Black sexuality without any display of agency or context leaves much to be desired for the audience, especially since Bilquis rarely speaks in the series. Writing more dialogue and providing a relevant backstory could change this, but nothing is offered beyond deeply saturated scenes laced with candles and entrancing theme music. 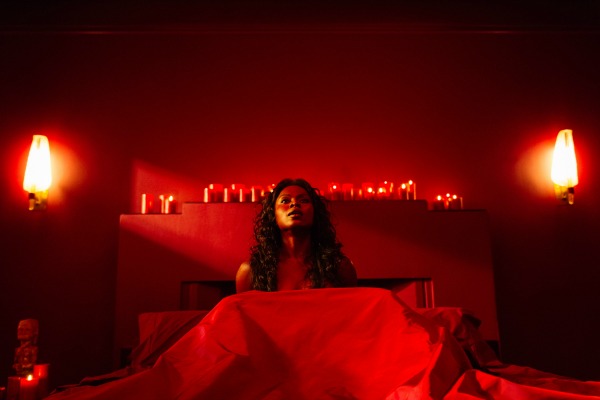 The most explicit commentary on race is introduced by Anansi (Orlando Jones), the Ghanaian trickster figure, re-imagined as a slick-talking, colorfully suited 1950s figure. Anansi incites enslaved Africans to revolt with an enthralling monologue on the history of Blacks in America. In the monologue, Anansi states, “Shit, you all don’t know you Black yet, you think you just people. Well let me be the first to tell you, that you are all Black. The moment these Dutch motherfuckers set foot here, they decided that they were white, and you get to be Black—and that’s the nice name they call you…” Anansi continues his monologue, poetically explaining centuries of racial subjugation, exploitation, and death for enslaved Blacks. Still, American Gods manages to address the realities of being marginalized in America only superficially without much nuance or depth. The monologue misses the mark about how media and technology reinforce and support systems of oppression. If American Gods authentically aims to explore religious and modern influences on human behavior, more work is required to sufficiently address impact.

While many fantasy worlds struggle to include more diverse characters and narratives, it is possible. True Blood stands as an example of a science-fiction drama with diverse, groundbreaking characters whose journeys intertwined with supernatural elements. Still, American Gods is compelling because it intricately develops its supernatural world. In fact, the cinematography saves the storyline from erratic pacing: The antagonists, godly personifications of technology and media, appear in vague, inexplicable scenes. Technical Boy and the new Goddess of Television make worthy, but opaque introductions draped in cyber-fantasy and nostalgic Americana. Technical Boy declares, “We have reprogrammed reality. Language is a virus, religion, an operating system, and prayers are just so much fucking spam.” It’s clear that a showdown is ahead. However, the growing tension between archaic figures and modernity befuddles any clear answer.

Edits between gratuitous carnage and entrancing sex scenes trudges American Gods along. Its details—the texture of gold coins flying across a bar, the dandelion and its spores drifting across a field, or bubbling water prepared for Russian tea— distracts the viewer too frequently. Often scenes are stretched across multiple episodes, whether it’s a bloody, lynched Black body, or a tedious checker game. This effect confuses the viewer’s understanding of the storyline, but didn’t deter me from finishing the season. These flaws could be solved by creating more backstory for Shadow, and other Black characters—specifically in relation to their own communities.

How did these Black characters arrive within a supernatural world in isolation without authentic connection to other people of color? Even if an audience is capable of suspending this belief, the fact remains that American Gods should dig deeper and write savvier commentary on the concept of race and its connection to the allegory. Yet, Whittle smolders in the role of Shadow, cementing its various components within the protagonist. Shadow makes the spiral into the unknown somewhat believable and sexy. When it isn’t dazzling viewers with luscious visual effects and double-jointed storylines, American Gods demonstrates its potential as a critique of ancient belief and modernity. The result makes for spellbinding television. 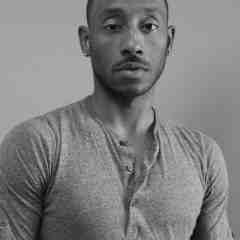 fredrick scott salyers is an educator, writer, and photographer based in brooklyn, new york. salyers has spent his career dedicated to the academic, personal, and social development of young black men. throughout his career, salyers has worked in both k-12 and higher education. he is a dean of student culture and college readiness instructor at a high school in crown heights, brooklyn. he enjoys aromatherapy, fried chicken, summer breezes, and “slap yo mama” cajun seasoning. 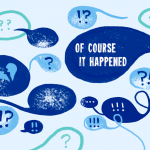 by Karol Collymore
White people have never wholly accepted what happens to people of color in the United States.