Nothing NewAmerica’s Conveniently Forgotten History of Anti-Semitism Is Us 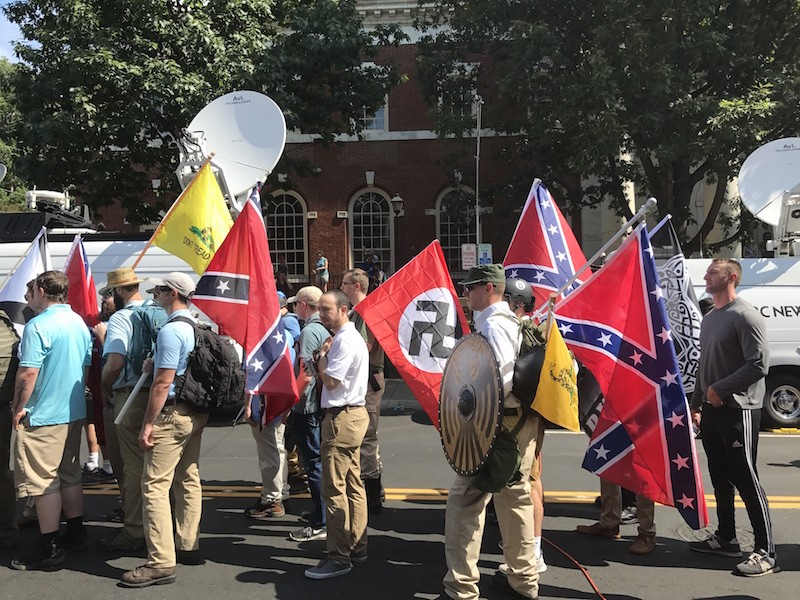 In 1943, the U.S. War Department created and distributed the propaganda film Don’t Be a Sucker to warn Americans against Nazism and fascism. The short, which went viral in the days after white-nationalist groups descended upon Charlottesville in August, opens on a man angrily waving a pamphlet, shouting to a crowd of onlookers. The self-proclaimed “American American” goes on to blame Blacks, Catholics, Freemasons, immigrants, and others for the country’s sufferings. A man in the crowd turns to another, and in an accent says, “I’ve heard this talk before, but I never expected to hear it in America.” Today, nearly 75 years later, much of the country is echoing that sentiment.

Since the 2016 election, headlines about neo-Nazis have become fixtures in the American news cycle. Many of these articles entertain questions like: Could we have seen this coming? How could this happen here? Within the national conversation about Nazism in America on social media, there too are common undercurrents of surprise. Tweets like those below circulate on Twitter:

YOU CAN’T BE BOTH A NAZI AND A PROUD AMERICAN.

WE LITERALLY HAD A WAR ABOUT THIS.

THE WHOLE WORLD WAS INVOLVED.

Because it keeps needing to be said: Nazis are bad. White Supremacy is bad. We don’t need to see their side and have a debate. We had a debate. It was called World War II.

Like Don’t Be a Sucker, these tweets suggest that American patriotism and Nazism are mutually exclusive ideologies: One cannot be both a neo-Nazi and a proud American. This widespread disbelief at an emboldened and increasingly violent far-right speaks to a collective understanding of the United States—its values, culture, and government—as fundamentally opposite of the principles espoused by the groups Trump still refuses to condemn. 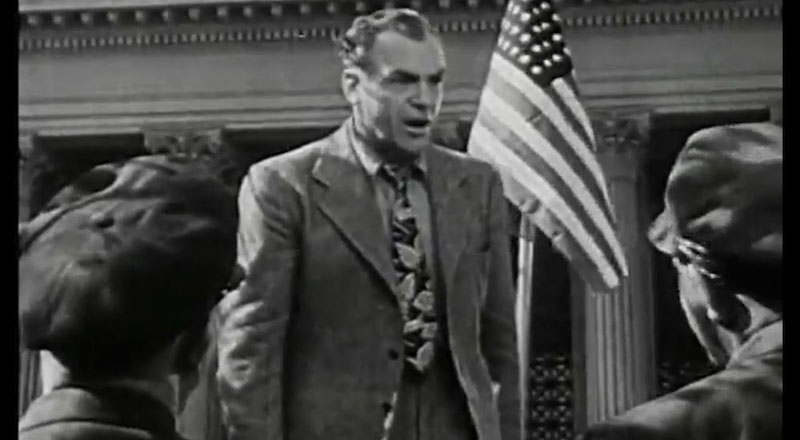 Perhaps this is because American patriotism has been consciously branded as a moral foil to Nazism since World War II: American comic book heroes usually have at least one Nazi-affiliated nemesis (Captain America has more than five). There are listicles and festivals dedicated to “Nazi Punching” movies, of which there are now enough to constitute a film mini-genre. The video game Wolfenstein II, which is currently being heavily advertised online with the hashtag #NoMoreNazis, is a first-person shooter in which players… kill Nazis.

Although anti-Nazism permeates U.S. media and culture, this construction of America as inherently anti-Nazi is just that, a construction. In theory and in characterization, America is and has always been an uninhabitable environment for anti-Semitism and Nazism. Not so in reality. There are parts of U.S. history that reveal America’s complicated relationship with Nazism and legacy of anti-Semitism that you are unlikely to find in a textbook.

Take for instance, the German American Bund, which formed in the United States in the mid-1930s to advance a positive view of Nazi Germany. Just before WWII, the Bund held rallies to protest Jewish groups, organized youth camps, and garnered tens of thousands of members. In 1939, the group organized a massive rally at Madison Square Garden in support of Hitler, decrying the “Jewish conspiracy in America.” Swastika flags hung on either side of a massive portrait of George Washington. As stated by Rick Perlstein in the New York Times Magazine, throughout WWII, the organization carried out “‘small pogroms’ in Boston and New York that left Jews in ‘mortal fear’ of ‘almost daily’ beatings. Victims who complained to authorities, according to news reports, were ‘insulted and beaten again’… the mayor of Boston and the governor of Massachusetts largely looked the other way.” Even at a time when when anti-Nazi sentiment in America was at its peak, fascism and anti-Semitism had a presence in the United States. 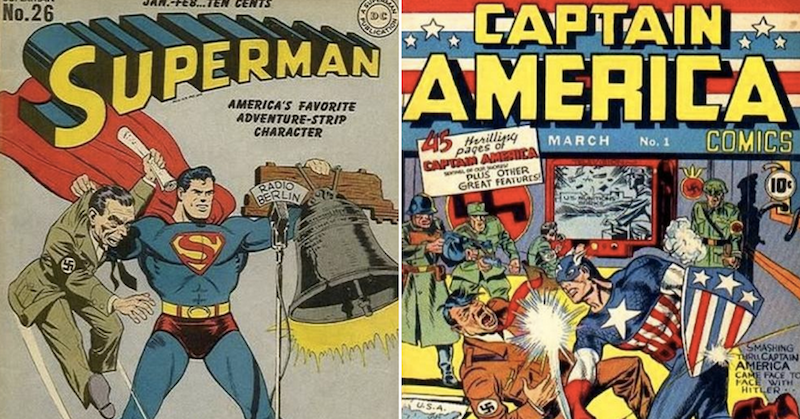 Although during the war, the United States accepted thousands of European Jewish refugees, the nation neglected to save thousands more from the Nazis by granting them asylum. A ship of nearly 1,000 Jews from Germany, the St. Louis, was literally forced to turn around. And in recently declassified documents, it was revealed that the Allied powers knew about the concentration camps and extent of the Holocaust, but waited over two years to intervene in order to protect economic interests. The American public, on the other hand, were kept largely in the dark. Millions more people might have been saved, had the lives of Jews, other ethnic minorities, the disabled, and LGBTQ individuals mattered more to the American government than “economic interests.”

We are constantly fed the narrative that World War II was a moral war (Nothing is said, of course, about Japanese internment camps). America’s participation is touted as evidence of our nation’s implicit goodness and its liberation of concentration camps as proof of Jewish allyship. However, the rescue of European Jews was a collateral justice. Their evacuation was a happy side-effect, not the primary reason for America’s participation in WWII.

There are parts of U.S. post-war history that are also rarely discussed, but which highlight the country’s hypocritical stance on the acceptability of Nazism and anti-Jewish sentiment. In the second episode of the third season of The X-Files, Scully and Mulder investigate the existence of alien-human hybrids created under the U.S. program, Operation Paperclip, a secret government effort during the aftermath of WWII to bring Nazi scientists to the U.S. in order to work for the government. The alien-human hybrids are (probably) fictional, but Operation Paperclip is not. From the mid-1940s through 1959, over 1,500 former Nazi scientists were brought to America, absolved of their crimes, and placed in powerful positions at various governmental organizations. 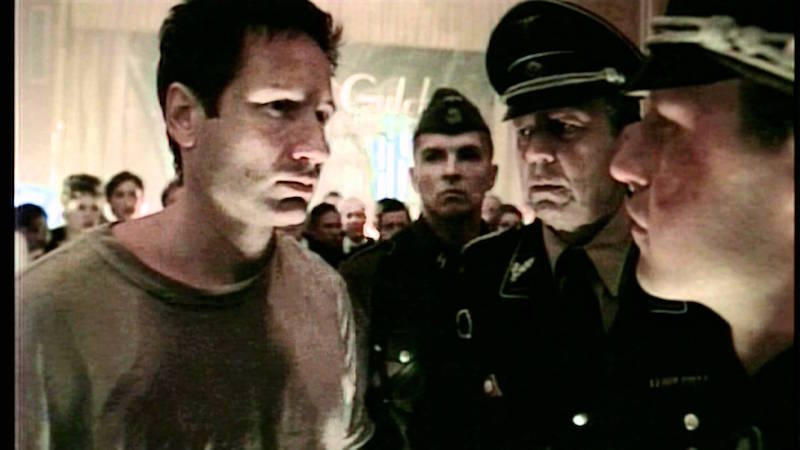 The fathers of rocket technology and space science in the United States were Nazis. That isn’t hyperbole: A member of the SS and the inventor of the V-2 rocket for Nazi Germany, Wernher von Braun, was also the chief developer of the rockets that launched the Apollo lunar landings. He was the first director of the Marshall Space Flight Center, NASA’s largest hub. In 1975, he received the National Medal of Science from President Gerald Ford. A crater on the moon, “von Braun,” is named for him.

Huburtus Strughold, nicknamed “The Father of Space Medicine” in the United States, performed experiments on Jewish inmates in Dachau and Auschwitz before his tenure with NASA and the U.S. Air Force. In the 1950s, the Justice Department exonerated him. The Huburtus Strughold award was given out by the Aerospace Medical Association in his honor until 2012.

This is not to say that these accolades were undeserved—these men made substantial contributions to the U.S. space program that have shaped our relationship with our solar system. It is rather to illustrate that historically neither Nazi affiliation nor extreme anti-Semitic views have prevented men from rising in the ranks of the U.S. government to wield significant power. 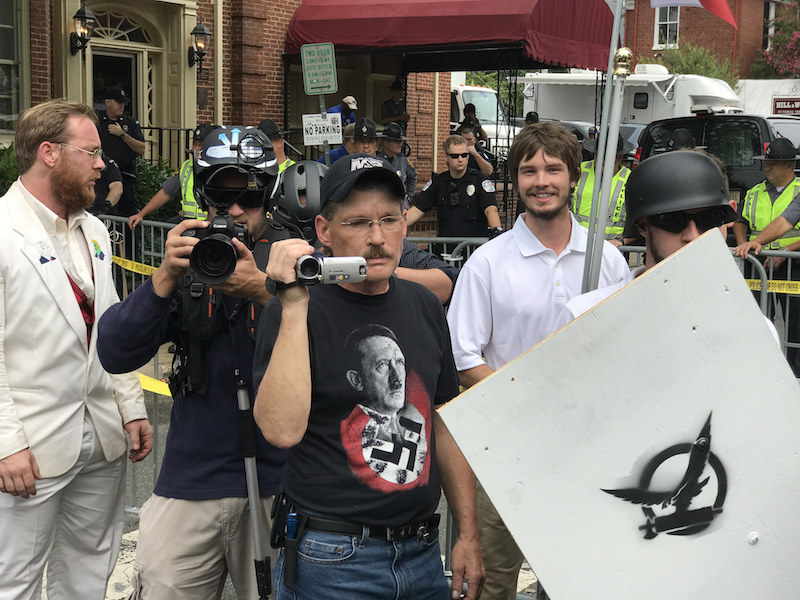 This history in mind, why was there shock when Trump called the neo-Nazis who descended upon Charlottesville “very fine people?” Why is there such surprise at a thriving and increasingly aggressive far-right presence in America? Why did America’s “no” vote on a United Nations referendum denouncing Nazism a few weeks ago cause outrage online when this is how the U.S. votes on this resolution every single year? Because this history was at best forgotten, at worst suppressed.

The violence and hatred displayed in Charlottesville was not an anomaly. Donald Trump’s appointments of men with white-nationalist ties to his administration weren’t unprecedented. The president’s continued refusal to denounce the neo-Nazis who chanted “Jews will not replace us!” is not a wild departure from the inaction of past governments who also turned a blind eye.

In short: This isn’t new. Donald Trump’s bluster and his administration’s unabashed apathy and cruelty have revealed ugly truths about our government and culture that have always existed, but were previously hidden beneath the shadows of conventional political rhetoric and decorum. Thomas Frank writes in The Guardian, “Trump’s incompetence is one-of-a-kind… Yet in other ways, Trump’s sins are continuous with the last 50 years of our history.”

As a nation, the United States struggles with accountability: Memories are short and selective. Textbooks are whitewashed and sanitized. Excuses are abundant. When Jews and other oppressed minorities say “Never Again” to immortalize the instances of hatred that have terrorized our communities, we mean it. But that assertion of remembrance is futile if the rest of America forgets.