When Amerie—before she added the second i—released her debut album All I Have on July 30, 2002, it was the perfect congruence of art reflecting life. Amerie introduced herself by strutting out of a Brooklyn, New York, brownstone and asking the object of her heart’s desire a simple question: Why don’t we fall in love? I sat on the wrap-around porch of my cousin’s house in Queens, New York, asking the same question. In the same summer that All I Have was released, I fell in love for the first time, and listening to the album’s 12 songs now transports me back to that special moment. With the album’s long-lasting resonance, it’s clear that I’m not the only person who feels connected to Ameriie and her debut offering.

First Love and I met in 2002, right when spring transitioned into the sticky sweetness of summer. We clicked in a way I never had with any man before—or after. Shortly after we met, I hopped on a Greyhound bus headed to Queens with my mom and two siblings. As we bumped along the highway on the eight-hour ride, I weighed the pros and cons of risking long-distance phone charges to keep in touch with him, but I found so much more to contemplate when I grabbed a copy of Honey Magazine at a rest stop along the way.

Inside Honey, there was a red CD slip with gold lettering that read: “Amerie: All I Have Sampler.” I bought a few extra AA batteries for my CD player, and then headed back to the bus, ready to take in what she had to offer. It was the beginning of the summer and the beginning of my first love, and All I Have showed itself to be the perfect album for both. Ameriie’s unconventional voice combined with writing and production from Rich Harrison (the mastermind behind “Crazy in Love”) created a new sound that pulled at my ear. Where her voice may have lacked pure strength and polish, the earnestness and honesty in her singing made up for it. Ameriie sang in a way that made me believe she was experiencing love just as I was, and I was hooked. Additionally, Harrison’s penchant for infusing R&B sounds with Washington, D.C.’s go-go influences gave All I Have a bounce that I hadn’t heard before.

All I Have was instrumental in ushering in a new sound for pop and R&B. While it lasted, the Ameriie plus Rich Harrison combination seemed magical. They also produced the smash hit “1 Thing” off her second studio album, Touch. Other notable women artists and entertainers enlisted Harrison to craft their sound: Beyoncé entrusted him with “Freakum Dress,” and Jennifer Lopez snagged his beat for “Get Right,” which the New York Times called one of her most “memorable” songs. Ultimately, Harrison’s work with women artists filled the early 2000s with powerful, funky, and unforgettable music. That influence continues today, showcasing All I Have’s continued relevance.

All I Have’s sound, sentiment, and summer release conjured up the perfect exploration of romance. The Black women in my social circles loved the album for the innocence, tenderness, and vulnerability it evoked—elements that were (and still are) often absent when it comes to our expressions of love. Alongside All I Have were songs that placed lust over love, such as Fat Joe and Ashanti’s “What’s Luv,” the should-I-cheat stress of Nelly and Kelly Rowland’s “Dilemma,” and the male vulnerability of songs like Usher’s “U Got It Bad.” Ameriie’s lead single, “Why Don’t We Fall In Love,” and the full album gave us a look at love from a perspective that sets pretense aside and acknowledges the fears that come with falling in love.

Almost every song on the album spoke to my First Love experience. “Talkin’ To Me” detailed the connection between lovers that goes beyond words, and reminded me of how he and I could sit in complete silence—the kind of silence that’s rich with its own electric energy. The layered vocals in “Can’t Let Go” also stood out, and spoke to the infatuation I felt: “I never knew real love, real love/ Till you were mine/ And I/ And I never knew each touch/ Between us would feel like the first time.”

“Hatin’ On You” is the ultimate song for people who are trying and failing to keep their emotional walls up to prevent themselves from falling too hard, like First Love admitted to when he first told me he loved me. “Show Me” is another one of my favorite tracks on All I Have because Ameriie’s soaring vocals, Harrison’s syrupy smooth beat, and lyrics that perfectly matched the way I felt about my budding romance. I sat on that bus ride to New York City with that track on repeat, dreaming of a future with one of the best human beings I had ever met.

“Got To Be There” was a cute bop about breaking up, but it didn’t fit my love story until we split a couple of years later. The album’s title track also resonated during our break up, but “All I Have” is placed at the end of the album, closing such a buoyant collection off on a melancholy note. “I Just Died,” made a lot more sense to me when we got back together years after that breakup; Ameriie’s airy vocals floated over Harrison’s delicate production, reflecting our vulnerability and reconnecting hearts.

Whenever summer starts to bloom or when I’m feeling particularly nostalgic about the past days of first loves, All I Have gets another full spin. As I look at my now-husband and remember how the album provided the soundtrack to the highs and lows of our love story, I thank Ameriie for the timeless vibe she created. For Black women listeners in particular, All I Have was a musical offering that showed us the sweetness of exposing our hearts and taking chances on love. Fifteen years later, it remains a welcome departure from the jaded and disconnected natures of romantic relationships. From that fateful summer in 2002 to now, Ameriie’s All I Have will forever hold a special place in my heart and the hearts of many others.

Relevant: A Requiem For Brooklyn 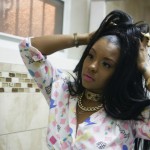 by Erica Buddington
Latasha Alcindor’s B(LA)K allows listeners to go beyond the bodega in an effort to save Brooklyn from gentrification.