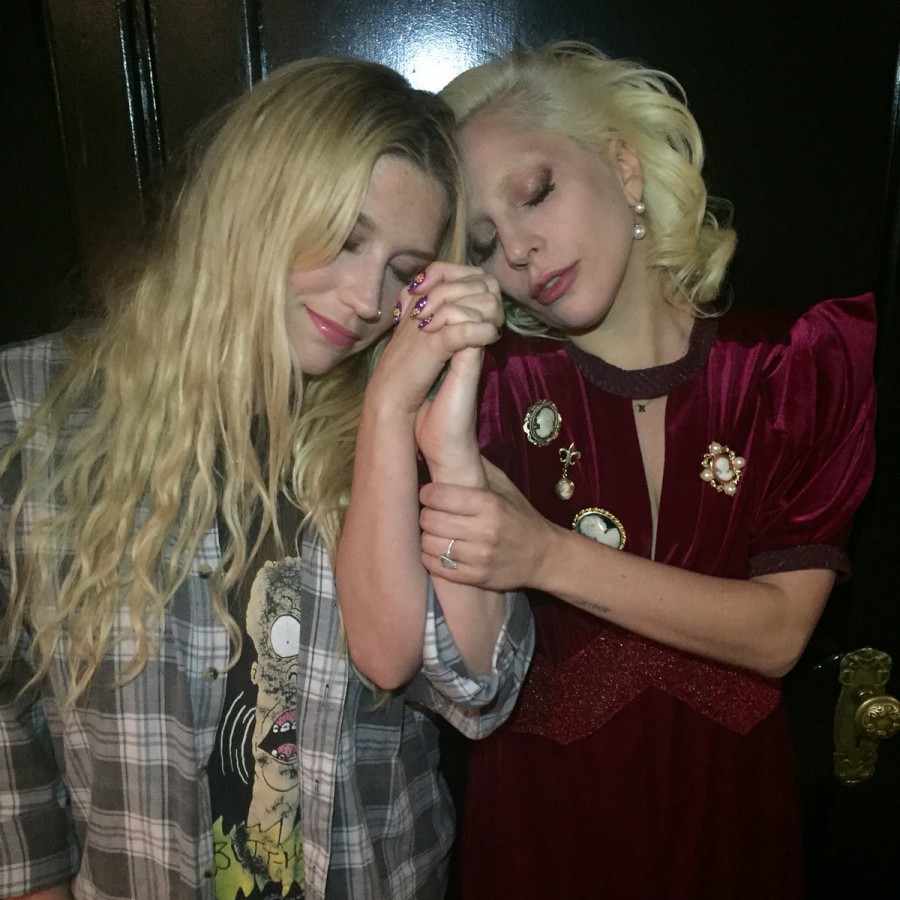 Lady Gaga posted this photo with Kesha to her Twitter account as a show of support after last month's ruling in the musician's case against Sony.

Update 3:30pm — According to The Wrap, which originally reported that Sony would be dropping Dr. Luke, the company is not actually ending its ties to the record producer. The outlet posted an update with a statement from Dr. Luke this afternoon, saying:  “A representative for Dr. Luke issued a statement denying TheWrap’s report that Sony Music is expected to end its working relationship with the music producer ahead of his contract expiration in 2017. 'This is not true. Luke has an excellent relationship with Sony. His representatives are in regular contact with executives at the highest levels at Sony and this has never come up,' a legal rep for the producer said.” If that's true, it's sure to dissapoint many Kesha supporters—the celebratory hashtag #SonyIsDroppingDrLukeParty has been trending on Twitter all afternoon and anti-sexual violence groups like PAVE have come out to publicly applaud Sony's decision to drop the producer.

We'll keep updating this story as we have more info.

Big news in the ongoing campaign for musician Kesha to be freed from her contract with the high-profile producer Dr. Luke: Sony is dropping Dr. Luke.

The producer’s contract with Sony is set to expire next year, but The Wrap reports that the company is ending their relationship with him a year ahead of schedule. Sony has not commented on why they’re ending his contract, but music industry insiders told The Wrap that it definitely has to do with the outspoken criticism of Sony from Kesha supporters—especially from big-name stars like Lady Gaga and Adele. “Kesha has no case in regards to her contract but they can’t afford the Adeles of the world out in the streets calling the label unsupportive,” a source told TheWrap. “The fact that this hasn’t already been taken care of with Luke is confusing, especially for people in the building.”

In 2014, Kesha filed a lawsuit to end her contract with Dr. Luke’s label Kemosabe Records, which is a Sony imprint, saying that the producer sexually assaulted her and she shouldn’t be forced to work with him. Dr. Luke denies the claims. While Kesha has been pushing the case forward, she’s been unable to release new music, impededing her career. Last month, a New York Supreme Court judge sided with Sony and Dr. Luke, blocking an injunction in the case. “You're asking the court to decimate a contract that was heavily negotiated and typical for the industry,” said the judge. “My instinct is to do the commercially reasonable thing.”

That ruling sparked an outcry from Kesha fans to “Free Kesha” from her contract, drawing connections between her case and other recent revelations of sexual abuse in the entertainment industry. Kesha herself posted a statement online saying that the lawsuit is not about angling for a better record deal, but “about getting free from my abuser.”

It’s not clear how Sony distancing itself from Dr. Luke will affect Kesha’s contract or case. But it could be a good sign for Kesha that support for her case is picking up steam from inside the music industry.