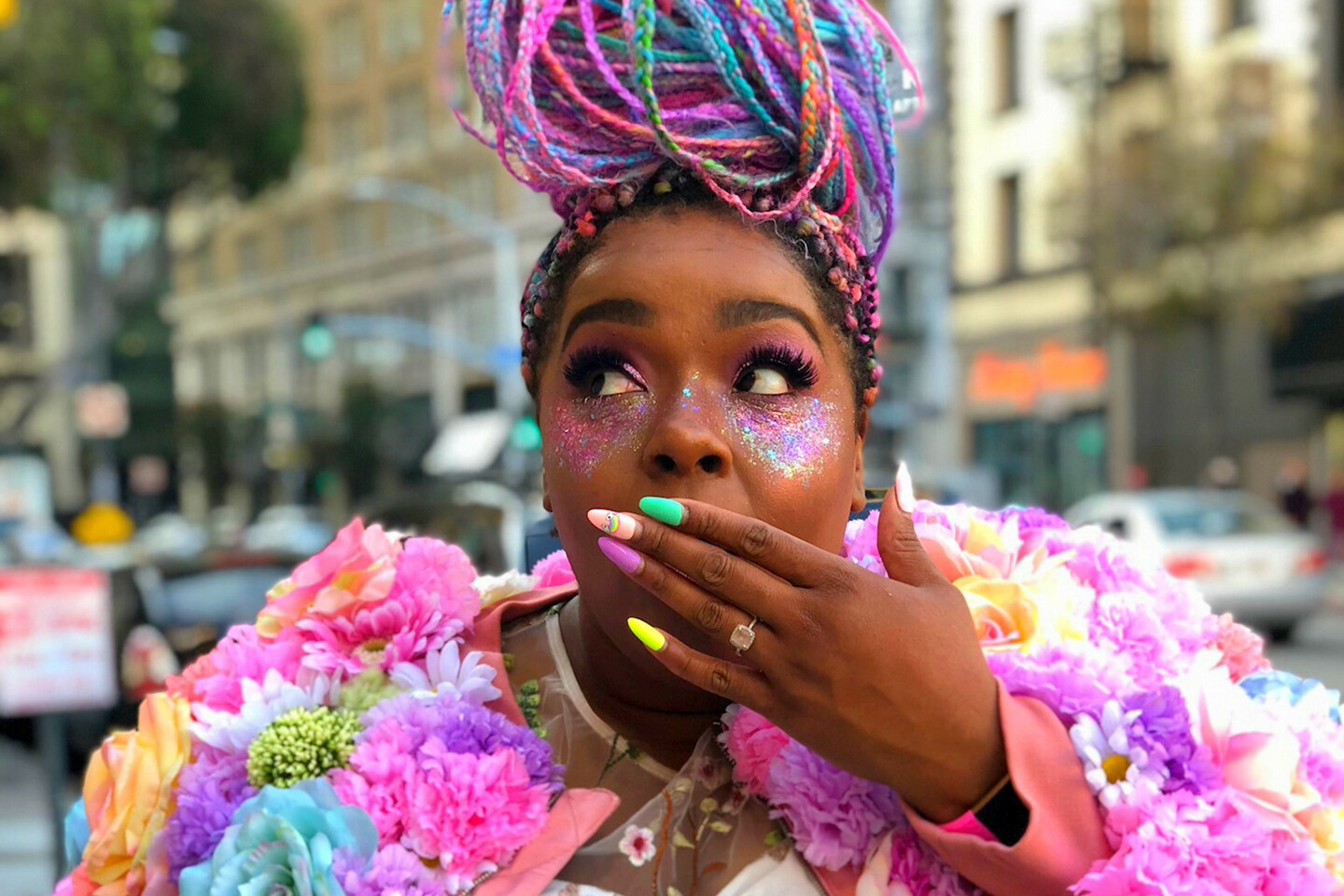 Amina Mucciolo is always the most vibrant part of any room she walks into for many reasons: her bright smile, her love of sparkle, and the wide array of colors she always incorporates into every outfit and makeup look. On the homepage of her aptly titled website—a rainbow in your cloud—the visual artist, content creator, and designer is seen sporting a multicolored turtleneck, sparkling pink eyeshadow, and waist-length braids of every shade imaginable as she twirls around, laughing, and looking so carefree that it’s impossible not to smile alongside her. The 38-year-old has made a name for herself through the bold colors she uses in her interior design, fashion, and extensive makeup and hair tutorials, things that have nurtured a growing community of fans drawn to her positive energy and her insistence on being unapologetically herself.

Over the last decade, the proliferation of influencers on platforms such as Instagram and YouTube, famous for their carefully curated “aesthetic” and color palette, has led to a unanimous “look.” Mucciolo’s appeal comes not from the way she has championed these norms but how she’s broken away from them: Rather than donning the typical pastel and earth tones that many popular Instagrammers rely on, Mucciolo’s platforms are covered in deep blues, neon greens, and more than a few rainbows. Instead of following trends, Mucciolo chooses every shade and design she wears with intention. “Everything starts with color and how the color makes me feel,” Mucciolo says. “It’s not really about a specific emotion like happy or sad; usually it’s about, ‘This makes me feel okay. This makes me feel like I can move through the world.’” For instance, Mucciolo sports strikingly blue hair in a recent look, a choice she made because of her love for the ocean. “It made me feel right,” Mucciolo recalls. “It made me feel like myself.”

Mucciolo is many things—a YouTuber, an Instagrammer, a designer, an artist—but through it all, she has remained true to herself. Mucciolo first gained popularity online nearly a decade ago, when she created Studio Mucci, a creative multimedia design studio that helps people redecorate and incorporate color into their space. Studio Mucci also sells vibrant home decor and apparel with motivational catchphrases such as “Don’t give up, just take a break instead” and “Think of me when you feel lonely because I probably feel lonely too.” More recently, however, she has skyrocketed to internet fame, amassing more than 300,000 followers on Instagram thanks to her intricate hair and makeup tutorials, unique interior design ideas, and ability to encourage her followers to find the colors and styles that make them happiest. Mucciolo’s YouTube channel, Tasselfairy, is full of videos about hair and makeup, but it’s also a space where she opens up about her personal life: She speaks to the camera about everything from confidence and mental health to plus-size fashion and disability. 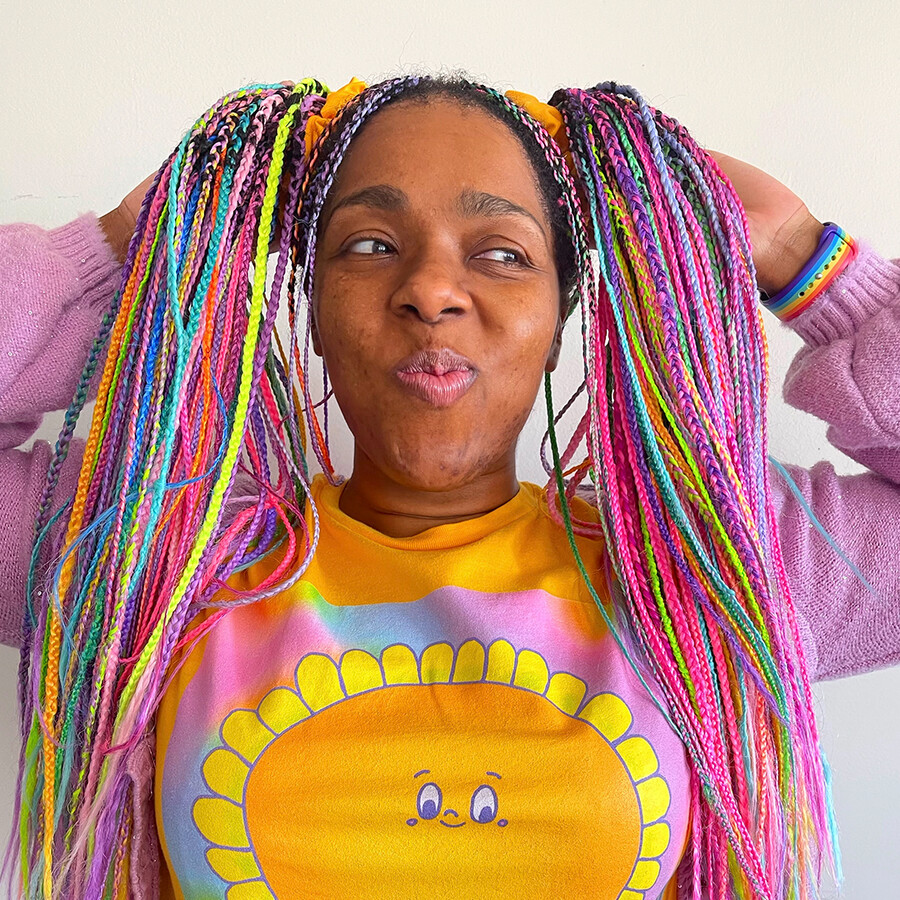 While much of this newfound attention has been positive, some of it has been more harmful. In recent years, Mucciolo has been involved in legal battles with two companies that allegedly used her decor and her identity and likeness without her permission: In June 2020, MGA Entertainment, the toy company responsible for Bratz dolls and L.O.L. Surprise!, began selling a doll that looks just like her. Similarly design company Lisa Frank seemingly ripped off Mucciolo’s apartment layout after seeing it on Instagram. After Mucciolo publicly called out both companies, the CEO of MGA tweeted that Mucciolo is a “disgrace to Black people,” and Lisa Frank called her “an opportunistic individual” making “false accusations that we have stolen artwork and designs from her.” (Neither Lisa Frank nor MGA responded to a request for comment.) Though it was difficult for Mucciolo to criticize these companies, she says this theft continues the unfortunate tradition of the internet stealing ideas from Black creatives without compensating them: In January 2021, writer and fashion blogger Chidera Eggerue publicly accused Florence Given, a white author, of plagiarizing much of her work in her recent book, Women Don’t Owe You Pretty, and demanded Given pay her reparations. A major brand allegedly orchestrated for designer Jasmine Elder to be kicked off Etsy in 2020 after it’d stolen her designs. “Honestly, it’s sometimes more dangerous to call out these things than it is to have them happen to you, so I’m always very careful about that,” Mucciolo says. “I think people assume I’m not going to defend myself because my platform is all about positivity. But silence is how they win.”

Despite these experiences, Mucciolo has never regretted using the internet to share her art, as it allows her to connect with fans and grow into her style and sense of self. “I discovered myself through working with those platforms,” she says. “It will always be a net positive for me.” As a Black, queer, and autistic woman, Mucciolo previously struggled to find community online. “I always felt like an other inside of an other inside of an other,” Mucciolo says. “I always felt weird and not understood even when I felt like I should be just because of how I express myself.” But posting hair and makeup tutorials helped her create a supportive online community that accepts her as she is. “I never saw myself or anything that I could really relate to until I started sharing,” she says. “When I started sharing my different colorful hairstyles, I found this whole community of people who wanted to express themselves in a similar way.”

If you’re trying to get to a place where your style is more authentically you, start with one thing that makes you feel so much like yourself or makes you feel excited.

Mucciolo has not only become an influencer but has also empowered people to embrace their true selves. “If you’re trying to get to a place where your style is more authentically you, start with one thing that makes you feel so much like yourself or makes you feel excited,” Mucciolo, wearing a multicolored blazer and rainbow pigtails, advised her viewers in a January 2019 YouTube video. “And I swear, you’ll just see yourself blossom over time.” Expressing herself authentically is of particular importance as of late, since one of Mucciolo’s 2021 resolutions is to “not mask.” “Masking,” also known as “camouflaging,” is a phenomenon wherein autistic people—autistic women in particular—mimic the habits and body language of nonautistic people. For many of those on the spectrum who have trouble reading social cues or making direct eye contact, masking allows them to engage in social activity without being on the receiving end of ableist judgement. While these techniques can be effective, they’re also exhausting for many autistic people who just want to engage with others in a way that feels natural to them.

Masking has long been a survival tactic for Mucciolo, who discovered she was autistic at the age of 35. “For the longest time, I would always be wracked with fear in any conversation by what I don’t understand,” she says. “Living in this world where there’s all these expectations for you to make eye contact when you’re speaking to people, or laugh at the joke when the punch line comes, or even know what the hell the punch line is, it really takes a toll. Masking is like being an actor and you’re in character. Imagine being in character all the time—you would be really messed up.” Extensive hair and makeup routines are an integral component of Mucciolo’s refusal to mask: She may paint her face or dye her hair, but those colors help enhance who she is, giving her the bravery to show the world her true self. “My goal is just to try to be in the moment and not worry if I don’t know the answers or if I sound stupid, because frankly, I don’t give a fuck,” she says. “I’ve survived too much to care about something like that. Haven’t we all?”

Read this Next: “Black Is King” Navigates African Cultures and the Diaspora’s Imagination 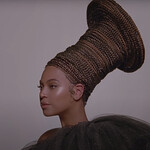 by Kovie Biakolo
“Black is King” works because it is honest: a film of hope and belonging.