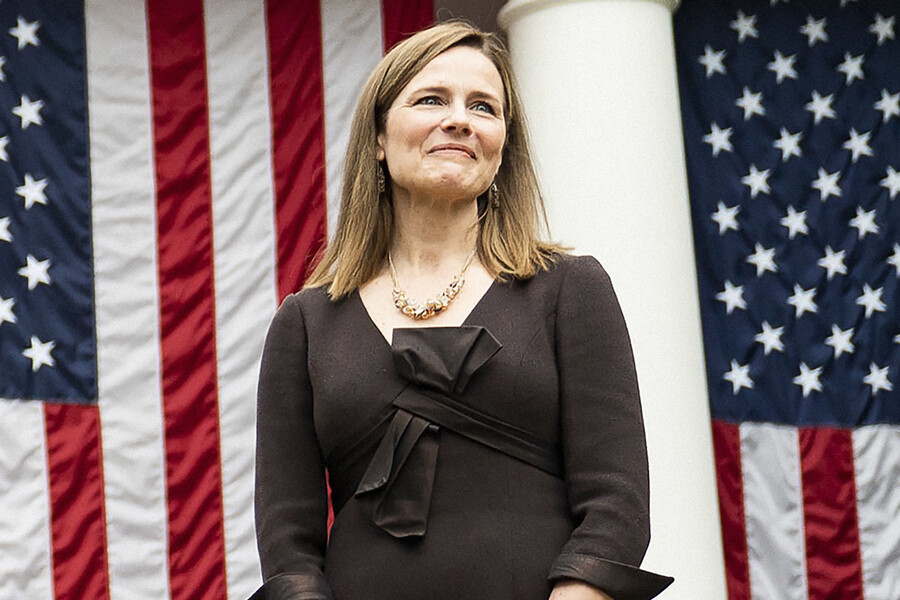 Judge Amy Coney Barrett is announced as Donald J. Trump’s nominee for associate justice of the Supreme Court of the United States in the Rose Garden of the White House on September 26, 2020. (Photo credit: Shealah Craighead/White House/Public Domain)

Donald Trump nominated conservative Amy Coney Barrett to the Supreme Court on September 26 to potentially fill the vacancy left by liberal justice Ruth Bader Ginsburg. To many, Barrett feels like Ginsburg’s ideological opposite: She was born in New Orleans where she attended an all-girls Catholic high school before attending Rhodes College and Notre Dame Law School, which are both affiliated with religious institutions. She worked as a law clerk under the late conservative justice Antonin Scalia from 1998 to 1999, and in 2017, she became a federal judge. During her confirmation hearing, Barrett was asked whether her faith would interfere with her work as a circuit judge. “If you’re asking whether I take my faith seriously and I’m a faithful Catholic—I am,” she said in 2017. “Although, I would stress that my personal church affiliation or my religious belief would not bear in the discharge of my duties as a judge.”

During that hearing, many Catholics defended Barrett against what many called unconstitutional questioning. Reverend John Jenkins, Notre Dame’s president and an ordained Catholic priest, wrote a letter to Congress in 2017 calling on those who questioned Barrett “to respect those in whom ‘dogma lives loudly’—which is a condition we call faith. For the attempt to live such faith while one upholds the law should command respect, not evoke concern.” Baltimore’s Archbishop William Lori described the line of questioning as going “back to a time in our country when anti-Catholic bigotry did distort our laws and civil order,” adding that Catholics “must remain vigilant against latent bigotries that may still infect our national soul.” Since she was confirmed as a circuit judge, many Catholics have continued to portray Barrett as a victim of anti-Catholic bigotry in the public sphere.

Following Trump’s nomination last month, many Catholics have publicly defended Barrett, including Philadelphia’s now-retired Archbishop Charles Chaput, who described, in the conservative Catholic publication First Things, attacks against the judge as evident of “a harbinger of future attacks on the Church herself and on any Catholic who holds with their enduring moral witness.” One writer described Barrett’s “warmth and compassion” as stemming “from the same wellspring of faith for which she is now so excoriated;” another wrote that the left’s attacks against the judge were anti-Catholic bigoted attempts “to otherize a conservative Catholic woman” and would only serve to prove “that feminism only defends ‘some’ women.” For many white Catholic women, Barrett, who is a mother of seven, “shows that it’s possible for a woman to rise to the top of her profession while having many children” and “represents the fact that not all women need to think the same way about the raising of children and family planning.”

Many of those on the left, however, are critical of what they see as major red flags in her judicial career. She has voted in favor of the death penalty; pushed for even fewer gun restrictions; and has ties to the Alliance Defending Freedom, which the Southern Poverty Law Center defines as a organization committed to “the recriminalization of sexual acts between consenting LGBTQ adults in the United States and criminalization abroad.” Barrett’s confirmation could also roll back rights for LGBTQ Americans, women, and working-class people who rely on the Affordable Care Act for healthcare. “No one should object to Barrett joining the Supreme Court because she is a conservative Catholic, or because she might belong to the People of Praise,” Matthew Sitman wrote in the liberal Catholic magazine Commonweal. “Her nomination deserves to be rejected because of her appalling record—a record that shows her to be a ready ally of the reactionary forces arrayed against what remains of American democracy.”

Trump’s decision to nominate Barrett didn’t happen in a vacuum: We’re in a moment where Catholic bishops are offering different opinions on how to vote in the upcoming election, while these same leaders continue to collectively remain silent on the Black Lives Matter movement; marginalized communities, especially Black men and transgender women face daily violence; and a global pandemic continues to disproportionately ravish Black and Latinx communities. Amid all of this, the Catholic Church has never fully reckoned with its complicity in the sin of slavery and the birth of American capitalism. American Catholicism has not evolved separate from our nation’s worst sins, and like other American institutions, the Catholic Church has been shaped by white supremacy, from its participation in chattel slavery to its inadequate 2018 document on racism.

Amy Coney Barrett can’t be upheld as a symbol of devout, 21st-century Catholicism while also supporting and possibly pushing for policies that will deprive millions in marginalized communities of basic, human rights.

Our church has been shaped by the very Christian culture that defends a woman like Barrett despite the little regard she shows for the LGBTQ community, particularly at a time when violence against transgender women and men is on the rise. (In 2015, she, along with other prominent conservative Catholics, signed a letter expressing support for the Catholic Church’s teachings on “the significance of sexual difference and the complementarity of men and women; on openness to life and the gift of motherhood; and on marriage and family founded on the indissoluble commitment of a man and a woman.”) And throughout 2020, Trump has proven how apt he is at manipulating a church attempting to reckon with its own complicity in U.S. white supremacy. Trump continues to use Catholic rhetoric to conflate the ideals of our faith and his own white supremacist beliefs.

He attended the March for Life in January, met with church leaders, including Archbishop José Gómez, and even spoke at the National Catholic Prayer Breakfast, where he said, “I will always protect the vital role of religion and prayer in American society, and I will always defend the sacred right to life.” And now, he’s nominated a Catholic circuit judge with less than three years of experience to the Supreme Court. If the Catholic Church wants to continue waving its pro-life flag, then our bishops must hold Catholic politicians, like Barrett, accountable. She can’t be upheld as a symbol of devout, 21st-century Catholicism while also supporting and possibly pushing for policies that will deprive millions in marginalized communities of basic, human rights. In an ideal world, Barrett’s nomination could be viewed as an opportunity to integrate true Catholic values of human dignity, justice, and solidarity into our broader society. Instead, the potential appointment of Barrett confirms what many in our country—and church—already know: The Catholic Church is unwilling to fully and authentically confront its white supremacy. 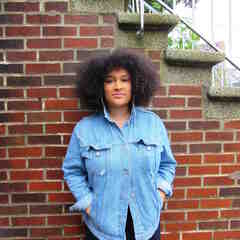 Olga Marina Segura is a freelance writer and an opinion editor at National Catholic Reporter. She is the author of the forthcoming book, Birth of A Movement: Black Lives Matter and the Catholic Church (Orbis Books, January 2021). You can follow her on Twitter: @OlgaMSegura.