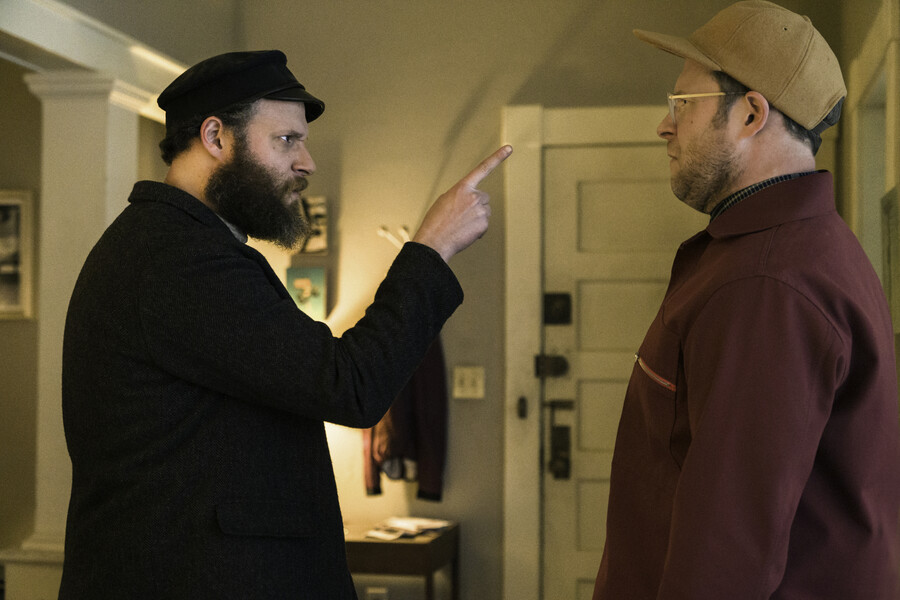 Being the great-grandchild of American immigrants can feel like occupying a strange liminal space. Anyone with firsthand accounts of The Old Country is generally long gone before you arrive on the scene, yet the sense of sacrifice and tradition of your near-ancestors still lingers. In the new HBO film An American Pickle, Seth Rogen bridges the gap between the two ends of this family tree when Millennial Jew Ben Greenbaum (Rogen) comes face-to-face with his past in the form of his great-grandfather Herschel Greenbaum, an Eastern-European immigrant also played by Rogen. Herschel suffered an unfortunate accident at a pickle factory in 1919 that preserved his body perfectly for 100 years, and is suddenly thrust into 21st-century Williamsburg, and into Ben’s generally uneventful life. If you’re wondering whether hijinks ensue, rest assured: They absolutely do.

Screenwriter Simon Rich, whose 2013 short story “Sell Out” was the source material for the film, sets the tone and scope of the movie from the start. His darkly comedic and swift-moving voiceover narration of Herschel’s pre-pickle life in Schlupsk makes it clear that we are not going to be dwelling too much in the past, nor taking it too too seriously. Director Brandon Trost follows suit, setting these early scenes with quick cuts and obviously fake backgrounds (the clouds in the sky behind the Cossacks as they approach to raid Herschel’s village are noticeably frozen in the sky). Equally winking voiceover narrates Herschel’s emergence from a massive barrel of brine in 2019, his brain and body fully intact and perfectly preserved due to “very good science.” It’s all very funny, especially for Jews who have historically made an art out of laughing at our pain.

Once Herschel’s only living relative enters the picture, you might think the themes of lineage and legacy ramp up. But Ben, whose parents have recently passed away, isn’t interested in commiserating about their tragic family tree. Ben is, in fact, curiously unruffled to see his great-grandfather in the (pickled) flesh: Doesn’t he want to hear about Herschels’s life in Schlupsk? Does he really have no questions about his great-grandmother, or life as immigrants in early 20th-century America? Is he even the least bit interested to discover that he and Herschel look exactly alike? But Ben has closed the door on his cultural and familial past, and despite Herschel’s miraculous return, he’s intent on keeping it shut. When Herschel observes that Ben has no family photos on the walls of his apartment, Ben balks. “I have pictures of my family, I just haven’t really, you know, like, framed them or incorporated them in my design” he explains before pulling a single thin album from his hallway closet.

The movie’s beats and pacing remain decidedly farcical even as we move into the meat of the plot, which involves the two Greenbaums scheming against each other with an almost cartoonish zeal. Much like Taika Watiti’s JoJo Rabbit, An American Pickle carves a deliberately buoyant, lighthearted path through a story framed by historical tragedy. Rich is a clever writer and observer of humanity, and the movie is full of sincerely, enjoyably silly moments. A sight gag of Herschel passing a Brooklyn hipster and Ben claiming that his great-grandfather and the man are “twinsies” is extremely satisfying for anyone aware of the New York fashion trends of the past few decades; and Herschel’s old country sayings and non-fluencies (“I will prove you stupid!” he tells Ben) are fun. Even a plot arc wherein Herschel brings his regressive views online and is simultaneously cancelled and revered for a series of problematic tweets is executed with a deft hand. When Herschel is asked if he might run for political office, he doesn’t really understand the question yet instinctively feeds off the crowd’s energetic cheers and replies that he “would like office.” When the crowd responds favorably, he repeats that he would “like big office;” and finally, over thunderous applause, that he “would like biggest office in America.” It’s a great moment where we get the joke without being bogged down for too long by the obvious political analog.

But though An American Pickle approaches some of the bigger themes of cross-generational immigrant family dialogue, it never quite engages them. The metaphor of Herschel being pickled might, for example, raise questions regarding how we can preserve history and tradition without getting stuck in it. And the fact that Rogen plays both characters is ripe for an analysis of the ways in which we do (and or don’t) see ourselves reflected the misty figures of our past. Instead, the movie gives us a fairly straightforward rivalry between two entrepreneurs, one who represents the technological focus of contemporary life, the other who literally dug ditches and clubbed rats to make a better life for his wife and future family. Legacy is certainly part of the story here (Ben created an app to honor his parents, and Herschel is trying to earn money to remove a billboard from over his wife’s grave), but the question of what Ben might owe to his great-grandfather, or vice-versa, is relatively underplayed.

In An American Pickle, not only is Rogen Jewish with a capital J, he embodies both his own Jewish present and a collective and just-out-of-reach Jewish past.

Still, it’s fun (and more than a little heartwarming to this particular great-grandchild of Ukrainian Jewish immigrants) to see Rogen in a movie that openly displays and centers his Jewish identity. Ben, Jewish in name but mostly disinterested in any actual trappings of faith and culture, could be a stand-in for the roles Rogen has played during his career until now: The actor has generally inhabited men—like Knocked Up’s Ben Stone or Funny People’s Ira Wright—who might be described as Jew-ish. Their membership in the Tribe is indicated with passing references to bar mitzvahs or circumcision; and it’s certainly reflected in their sense of humor and interactions with fellow Jews. His characters, however, if and when they have been explicitly Jewish, didn’t usually dwell on what that meant for very long.

But in An American Pickle, not only is Rogen Jewish with a capital J, he embodies both his own Jewish present and a collective and just-out-of-reach Jewish past. Given his recent comments about the State of Israel, it seems like Rogen’s got Judaism and its historical and contemporary cultural manifestations on the brain, and unpacking questions of identity, faith, and family by literally casting yourself as the great-grandparent you never met is one hell of a visceral way to confront one’s past. Given the potential heaviness of the premise, An American Pickle is surprisingly light, a movie whose emotions and stakes are just the right size for your TV screen. Ben and Herschel only graze the edges of discussions of faith and family, and they never chat (at least onscreen) about the larger historical and cultural contexts of Jewish identity that bridges their generations and about which Rogen himself has recently opined.

It’s not clear, for instance, whether Herschel knows about the Holocaust or the creation of the State of Israel, because the movie explicitly avoids those topics. (The plot point that Herschel’s wife died in 1939 doesn’t feel like an accident.) Herschel and Ben do end up empathizing with each other’s struggles and, as Herschel suggests earlier in the film, “bond[ing] over [their] pain,” but most of the bigger cultural questions the film might arouse are left for us to ponder from the comfort of our couches. And really, that’s as it should be. Rather than overreach with a treatment of themes he’s still unpacking for himself offscreen, Rogen approached a movie about Jewish identity in the way that felt right for him, and Rich wisely kept the script well within the comedian’s wheelhouse. The result is a heartwarming, funny, and ultimately very Jewish story about hardship, loss, and the redemption we can find in ourselves and each other—no matter how far away it sometimes feels.

Read this Next: In Bad Faith 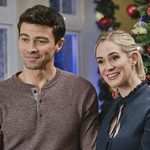 by Noa Azulai
Hanukkah, as it exists to Hallmark, is just Christmas’s quirky ethnic sidekick.