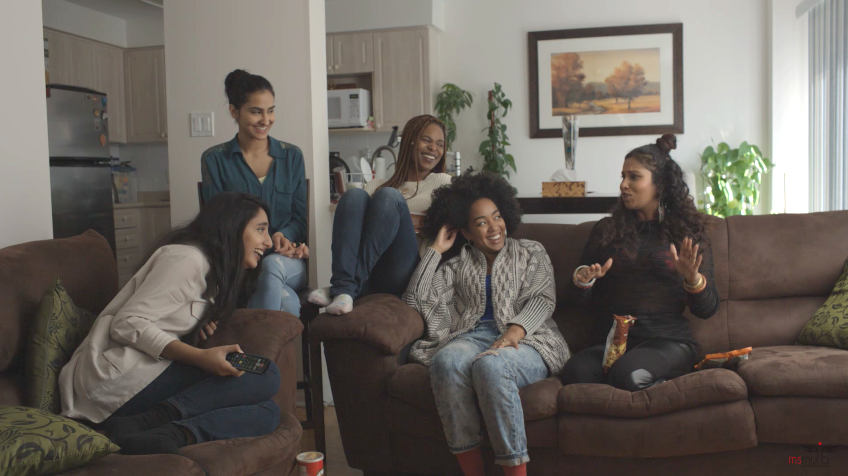 Director Rakhi Mutta had been thinking about the story behind her web series Anarkali for years. As a South Asian woman from Brampton, Ontario, the dating lives and social mores of her friends and community weren’t reflected in shows that she watched like Friends or The Mindy Project.

The series follows the title character, played by Kiran Rai, as she explores her friendships and the trials of dating while she overcomes the breakup of an engagement. With a rom-com sensibility, the series is a refreshing take on romance from a young Indian-Canadian woman’s perspective. Anarkali deals with her mom setting up “introductions” to potential partners, responds to racist pick-up lines from men at bars, and copes with the ugliness of recovering from heartbreak. The web series just wrapped up its second season of Anarkali's saga, and I talked with Mutta and Rai about the series, how to reflect diversity on-screen, and creating three-dimensional reflections of brown love.

The premiere episode of the first season of Anarkali.

RUMNIQUE NANNAR: The series does a lot to show South Asian women in a way that we rarely see in mainstream media. How do you see Anarkali in terms of breaking down stereotypes? And how does a web series allow for content and freedom from censoring yourselves?

RAKHI MUTTA: I think the fact of showing brown women as professionals who have jobs, who drink a glass of wine, or you’ll see them smoking a spliff. That’s a huge thing to see. I think even showing the sisterhood, and one that’s diverse, which is so important in breaking down stereotypes.

KIRAN RAI: Being Punjabi, there has been a lack of representation of how the womxn from my community look in the media. It's time we normalize those images by telling authentic stories, even through light-hearted rom-coms like Anarkali. We've never seen what it's like for brown girls to date in the diaspora. Anarkali is breaking down those barriers for more brown folks to feel comfortable to create their own content.

RAKHI: One of my core values and principles is to be in control of the images we are showcasing, because for so long we haven’t had this creative control, and that’s why you end up with all these characters like Apu, which is unfortunate.

KIRAN: The digital era is the future for actors, directors, and content creators. I think for us it was easier to put it online because we have creative control over it. For me, I do the acting, but I’m also involved behind-the-scenes and help with editing. Rakhi gives me a lot of creative control over how it’s edited, or how the story’s visualized. It’s uncensored and unapologetic, and that makes us unique.

What feedback have you gotten from people and the community? Has there been any negative feedback or backlash that has stuck out to you?

KIRAN: The fans of the show have been super supportive and constantly tell me they're hooked. From the community, it's been nothing but love. I think it's the first time for most people to see an all-POC show, with leading brown actors, that isn't Bollywood related. Having something that is relatable, that makes them feel like it's their story, is so important to them.

RAKHI: We’ve actually gotten a mix of really great feedback from a lot of young women and men, saying things like, “It’s my favorite thing on the internet.” A lot of women have said, “Finally someone is telling my story,” and that for me is the biggest compliment.

There was a comment someone wrote saying, “This isn’t family-friendly content, like other brown vloggers like Superwoman or Jusreign.” Like in season one, when the girls are drinking, I received a lot of comments about why we’re corrupting Indian values and why we’re depicting women doing these things. It’s not a lot, but we do get people saying, “Anarkali is so stupid, why is she embarrassing herself?” or “Brown women should get it together.” But they’re missing the entire point that this character is just trying to find herself, and these are things she’s doing to get over her heartbreak.

Friendship between the women is a really important part of the show and feels very real and authentic. Rakhi, how did you incorporate the stories of your friends into the episodes? And Anarkali and her friends are a very cool and diverse bunch, and often when we talk about diversity, it’s about creating content that you want to see and working on inclusion. How did you both go about casting these parts?

RAKHI: The reason I wrote Anarkali originally was because I never saw any of our stories anywhere. I grew up watching Boy Meets World or 90210, and our dating stories looked different. It was just what I saw around me and my own experiences, because I have such a colorful dating life [laughs]. In addition to it being a show about dating, I really wanted to show brown women’s friendships, because the sisterhood has been so supportive of me and played such a huge part of my journey. My social circle was very diverse while I was growing up. I wanted to show that type of relationship and the interaction between young people growing up in Toronto, but with different cultural backgrounds. You see this when Amanda’s character Dionne comes in episode nine, she refers to Anarkali’s mum as “Aunty,” because that’s what my homegirls do when they come over. It’s those simple nuances I wanted to capture.

Has the process of making the show changed how you both think about relationships in your own lives or your friends'?

KIRAN: Yes, it definitely has. It's fascinating to see how people relate to the broken-hearted story and trying to find themselves. I think everyone has been Anarkali in their life at one point or another, and that's why she's so relatable. Whatever decisions she's making—they get so invested and heated up, because even though they might have made the same mistakes and they want to see the best for her. I see myself in Anarkali all the time, and it can get difficult to take myself to those places again.

How do you both approach talking to your own parents about dating and relationships? Or do you not talk to them about that?

KIRAN: As much as my parents are understanding, it's still an awkward conversation to have. We just haven't grown up in that way to talk about our love life with our parents, and it's very real for most of us in the community. We can't just openly talk about dating unless this was a potential partner to get married to. We incorporate it in Anarkali as well, where her mom is constantly talking about how Anarkali needs to get married in order to be “happy.” It's not the parents' fault, this is what we've been conditioned to learn. However, I'm already creating change within my household by having a career I'm passionate about. Once that is there, it only leaves room for building more open and honest conversations about anything else. 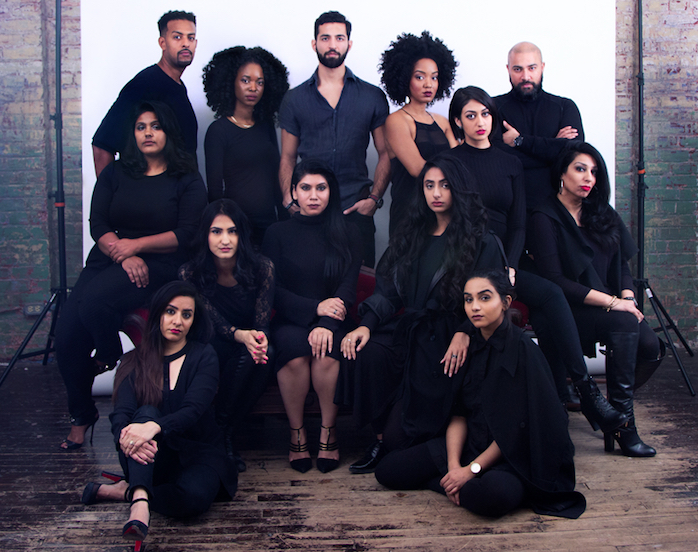 The show touches on themes of loss and losing your personhood after a relationship. Could you talk a bit about how these themes emerged? And last season’s finale had a really lovely story of Anarkali reconnecting with her friend Jag (Seth Mohan), and it’s a great portrayal of brown love. How important was it to you to show that?

RAKHI: Feminism has been a huge part of my life, and I was raised in a very conscious home. Growing up seeing these Indian women around me, their marital relationships were almost the only focal point of their existence, because marriage really gave them validation in the community. Anarkali is a show about finding love, but it is really the journey of one woman finding herself in a society that puts so much pressure on relationships and validation through others. It was really a coming of self.

Brown love is so important, and I don’t think we see enough of it outside of Bollywood. It was a critical visual to have because a lot of times in mainstream media, our men are portrayed to be terrorists or abusive. Not that these things don’t happen and [aren't] traumatizing, but there are a lot of really great men out there, and I wanted to show that. Being very conscious about brown love, I wanted to show someone that’s sensitive, open, and willing to try. Because we weren’t getting our brown stories on TV. A lot of people just watch Bollywood, where a lot of those stories were unhealthy, so it was super critical to showcase that.

I loved that episode where Anarkali and her friends get together to watch a Bollywood classic like Dilwale Dulhania Le Jayenge with Roop critiquing gender roles. What did you like about knocking these films down from the pedestal?

RAKHI: I hope to keep including a critique of different things that people might not necessarily think about, and I try to do that in the episodes. We definitely will continue to critique Bollywood, because it’s such a huge part of the diasporic life because for so long, we didn’t have anything else to identify with.

While you may be critiquing our culture in a certain way, there's also the aspect of celebrating brown folks as creators. The series showcases musicians and artists like WiseChild, Horsepowar, Rupi Kaur, and Selena Dhillon in each episode. Why was it important to you to leave that space at the end of the first episodes for that?

RAKHI: There’s so many brilliant South Asian artists, so I feel like unless we’re supporting one another, we’re never going to get the props we deserve. It’s actually Kiran, who knows what’s hot and happening, and she has the majority of the connections, so she does 99 percent of the post-production work.

KIRAN: Yeah, for a long time I’ve been building these connections with local artists, especially from the brown community. I’ve seen so many people in our community with the potential to be these great poets, musicians, and producers, but they don’t get the limelight they deserve, so I really wanted to showcase that through my content if I could. With people like Selena or WiseChild, it made sense to continue that relationship in Anarkali.

With the show tackling heartbreak, exotification in dating, and arranged marriage—topics that resonate with brown women—what are some issues you’d like to tackle in future seasons?

KIRAN: As an actor, I feel like I’ve really opened up and I’m a lot more confident and comfortable. We were also talking about exploring queerness and what it looks like to be that in the community.

RAKHI: When we shot the pilot, I was wondering, “Is this too much? Is this not enough?” As I become more confident in figuring things out, I want to explore open relationships, because I know a lot of homegirls in them and the complications that come with that. I would like to explore pregnancy, pregnancy scares, STIs, the dynamics of cheating, and all the things that people deal with. 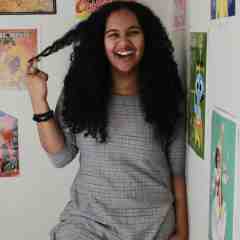 Rumnique is a freelance writer based in Vancouver, but you can probably spot her a mile away with that curly hair of mismatched purple. Her work has appeared in Empire Magazine, Mojo Magazine, The Toast, The Aerogram, and Jugni Style.