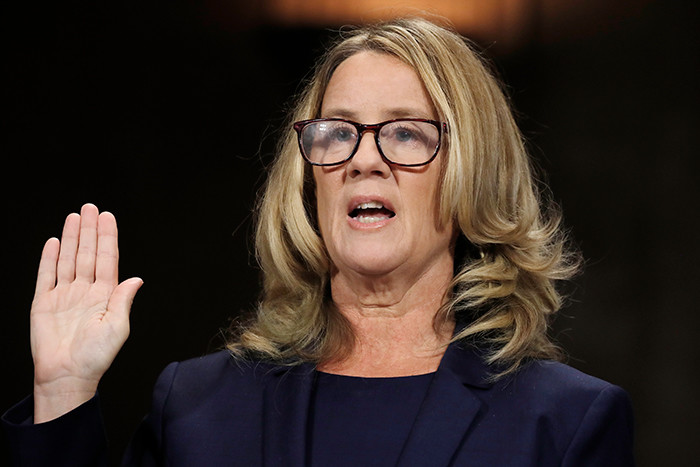 I don’t know what kind of day today will be as we await the testimony of Dr. Christine Blasey Ford against Supreme Court nominee Brett Kavanaugh, so I wanted to reach out directly this morning before it all gets started. The way today’s hearing is handled will stand either as proof of an evolution in our understanding of sexual assault and women’s bodily autonomy since Anita Hill’s 1991 hearing against Clarence Thomas, or, more likely, as a testament to the patriarchy’s persistent commitment to itself.

But while we all come together, around the country and at the Bitch HQ, to watch and wait for the outcome of this hearing, I do know one thing for certain:

We may live in a society that continues to silence women, but we cannot allow women-led, intentionally feminist media to be silenced as well.

I know today will be tough for many, ourselves included, so we want to leave you with two things:

The “culture of the 80’s” has been a topic of conversation as Brett Kavanaugh has unearthed old high school planners and calendars; what was “normal” at the time, what wasn’t, etc. As someone who grew up in the 80’s what have you been thinking about as the conversations about Kavanaugh have taken us back to that time?

Andi Zeisler: I’m definitely thinking about, and annoyed by, the ahistorical nonsense from male pundits/journalists/Trump about reporting: “Why didn’t she report? If it was that bad, of course someone would have said something!”

No, they almost definitely wouldn’t have. There was no language around the phenomenon of “date rape,” because rape was a thing that happened in dark alleys. Think about how badly law enforcement still handles rape allegations now, and then imagine walking into a police station in 1982 and being like “A guy I know tried to force himself on me at a party.” That was just a bad date. There were whisper networks, and there were rumors, but the idea that a young woman would tell her parents, much less the FBI, is just bonkers.

And I feel like a broken record on this, but nearly every aspect of pop culture aimed at teens involved boys tricking girls into sex, or peeping at them in showers, or drugging their drinks. That was considered normal. It did not even hit me until years later that Kenickie, in Grease, was supposed to be a virgin, putting on this whole show of sexual bravado and then pulling out this old-ass condom. It did not occur to me that in one of my favorite movies, 16 Candles, the guy who was the romantic lead just hands his drunk girlfriend off to a random nerd: “Here, take my passed-out girlfriend and do whatever you want.”  I don’t remember anyone I knew saying, “hey, that’s not right.” I think the closest thing to an acknowledgment of sexual harassment was the movie 9 to 5.

You remember watching Anita Hill testify. How does the language around Dr. Ford in the media today compare to the coverage of Anita Hill? Do you get the sense that history is repeating itself? If so, in what ways? How does it feel?

AZ: It’s really different in a lot of ways, especially because of the racial politics of a Black nominee being accused by a Black woman and both of them having to hew to respectability politics in front of a white Judiciary Committee. And it’s different because, again, there was not a common vocabulary for sexual assault in 1991. Anita Hill had to explain these humiliating situations Thomas had put her in to men who had probably done similar stuff themselves. And of course they couldn’t acknowledge it for what it was because then they’d be open to the same assessments.

But yeah, seeing Orrin Hatch saying the same gaslighting shit he said in 1991 makes me feel despairing because these men have not had to learn anything since then. There have been massive shifts in language and policy and norms around both workplace and behavior that they know nothing about because they don’t have to know and most likely don’t want to know. Joe Biden was the Judiciary chairman, and was responsible for not calling witnesses for Hill to testify, so he’s definitely still on the shit list. He’s penitent now about not standing up for Hill, and he’s said that he owes her an apology, but has he actually apologized to her one on one?

It’s maddening to think of the amount of proactive feminist work that’s not getting done because the past two years have been a pageant of men tripping on their own dicks.

What led you to co-founding Bitch in 1996? Did cultural and political moments like these influence you?

AZ: All of us just wanted to talk about pop culture, and use the lens of feminism to do it. I always say that for me it was very much about not being able to find that kind of content to read myself, and finding other people out there who wanted that too. Our feeling was that the more we took pop culture seriously as a way to examine cultural beliefs about gender and sex and feminism, the more we’d find our audience, and the more that this audience would expand their own feminism into actual cultural products—advertising, movies, TV, etc. We did want feminism to be mainstream, and to do that it had to be demystified first.

What do you feel Bitch offers, both to readers and to the media landscape in general, at a time like this?

AZ: I think we offer a space that validates anger that’s often difficult to express and that encourages using your voice to say things that many people still don’t want to hear. I would like to think that we remind people that the world is still turning, and that pop-culture criticism is about joy as much as anything else. And I know that we offer a commitment to pushing forward, to acknowledging that what we see in the news is evidence that the work of feminist movements and culture is alive and crucial and meaningful.

Is there anything else you’d like to share about this hearing, feminism, the role of media, or anything else?

AZ: I am honestly dreading the hearings. They’re going to be excruciating. Dr. Blasey is going to have to answer so many dumb questions over and over. The live, running commentary on the hearings will be excruciating. Whatever Trump tweets will be radioactively sexist, and remind me yet again that it did not have to be this way. The pundits who are treating this whole thing like a sporting event will say a bunch of stuff that proves, once again, that they see women as political props, and that will become its own terrible vector.

These past two weeks have been harrowing. I’ve reached “too mad to eat” levels of rage, which is not a thing I thought was possible, so I’m hungry all the time. I’m watching the smartest, most capable, most thoughtful women I know (not just women, but mostly) having to pause the other work they’re doing, derail everything they want to and have to get done in order to bear witness to history repeating itself. It’s maddening to think of the amount of proactive feminist work that’s not getting done because the past two years have been a pageant of men tripping on their own dicks. It’s maddening to realize the extent to which powerful people will go out of their way to protect colleagues and peers and institutions that harm women, and the lengths they will go to blame women for that harm. And it’s mind-boggling to see that so many women harmed by harassment and rape and coercion and gaslighting can’t even show their own anger because that’s still a taboo.

There are only four days left in our September campaign and we still have $17,857 left to raise by Sunday night.

To put it simply: We just won’t get there without your support.

If there is one thing that the commentary around Dr. Christine Ford Blasey’s testimony proves, it’s that we need truly independent, feminist media as much as ever.

So today, for all of us that might need it: Feminism forever.

The Link Between Oil Pipelines and Sexual Assault

(Not So) Real Monsters