In Its Final Season, “Shrill” Takes on the Fear of Being Seen | Bitch Media

Body and SoulIn Its Final Season, “Shrill” Explores the Fear of Being Seen 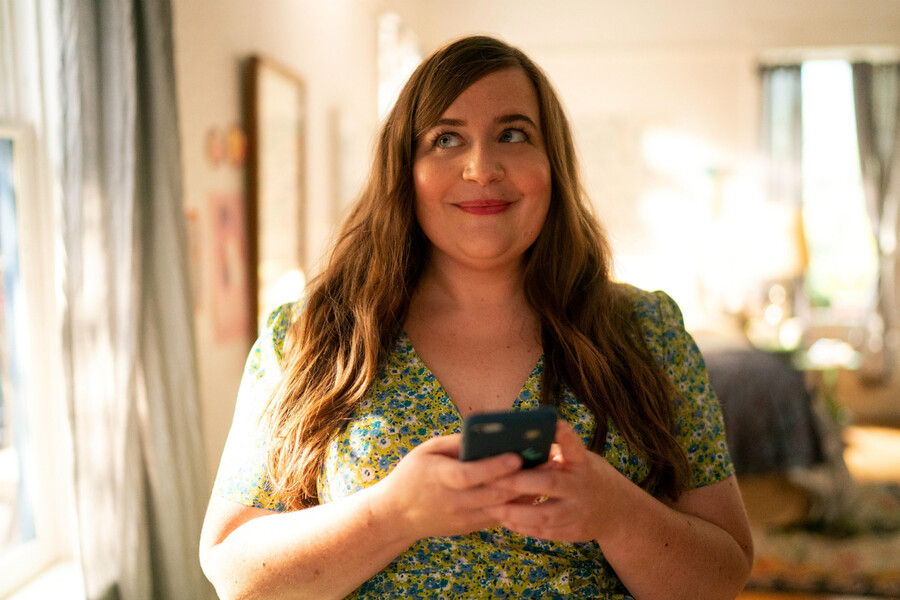 Since its premiere in 2019, Shrill has been redefining comedy’s relationship to fatness. Aidy Bryant plays Annie Easton like a classic everywoman whose most hilarious moments stem from her compulsive self-sabotage, and part of the show’s appeal is that her body is never the butt of the joke. The third season of Shrill opens on a comical note—Annie is on a terrible date with a devastatingly awkward guy. He tries to initiate sex with barbecue sauce on his hands. (Ribs really aren’t proper date food, by the way.) He ejaculates too soon. And then he has an emotional breakdown that forces Annie to stay even longer. This disaster comes on the heels of a huge change in Annie’s life: She’s finally kicked her boyfriend Ryan (Luka Jones) to the curb. Now, she has to deal with the hilarious misadventures of dating.

But underneath all the jokes, this season confronts a serious problem: As a fat woman, Annie is constantly treated as if she is on display—and even when she isn’t, the feeling of being judged remains at the forefront of her mind. At the end of the season’s first episode, following the disaster date, she meets with a new gynecologist who immediately recommends weight-loss surgery. This experience is all too real for the plus-size community. The association of fatness with laziness and poor health exists well before medical history is discussed. Doctors have a habit of assuming that weight gain is the root cause of every health problem in a fat person’s life; they also tend to speak casually about bariatric surgery, as if it’s an arbitrary decision and not a major surgery with significant risks. Annie responds to the fatphobic medical experience by writing an article about it and addressing the doctor by name. But despite the righteous confidence of her writing, it’s clear she’s still full of doubt about her self-image.

In the show’s previous two seasons, we have seen Annie face off against the world in her writing, but now it’s time for her to face herself. This struggle is most apparent in the season’s second episode, “Will.” In it, Annie’s coworker Amadi (Ian Owens) sets her up on a blind date with his friend Will (Cameron Britton), suggesting they would be “perfect” together. Once they meet, however, Annie reacts with panic. The reason? Will is fat. It’s clear he’s also a charming, solid guy, but all Annie can see is his weight and the way they look together as a fat couple. She immediately shuts down, barely allowing the date to get off the ground before writing it off as a bust. In a general sense, her reaction is understandable: Media often equate fatness with failure and portray fat couples as miserable people who enable each other to remain overweight. Early seasons of Roseanne grappled with this in its constant reminders of Dan’s and Roseanne’s skinnier pasts; meanwhile, rom-com plots in which a fat woman scores a skinny man or vice versa are portrayed as triumphs: What better way to prove your own worth than by coupling up with someone whose looks are more socially acceptable than your own?

Annie’s dating insecurities are further exacerbated by her growing distance from her best friend and roommate, Fran (Lolly Adefope). Fran has found love with Emily (E.R. Fightmaster) and their romance quickly becomes the heart of the show. Fran and Emily have great chemistry, healthy communication, and are genuinely great together. Most notably, they are both comfortable in their bodies (even after filming a cringe-inducing sex tape). Their love story runs parallel to Annie’s dating woes. Throughout the season, Fran’s only real problem is her fear of commitment. Emily is the full package and all she has to do is say yes. Meanwhile, all Annie wants is what Fran has: While her best friend makes a sex tape, Annie finds out the guy she’s been pursuing all season doesn’t want to date her. While Fran is coping with being in an adult relationship for the first time, Annie is worried that it will never happen for her. It’s an emotional disappointment that’s soon followed by a professional one.

Season 3 is proof that Shrill’s storylines about love and friendship are the heart of the show.

In the next episode, “No,” Annie gets what the internet often refers to as “cancelled.” In the previous episode, “Ranchers,” she turned down the opportunity to write about a fat girls hiking club to visit a community of white-supremacist separatists and interview its members. For Annie, the decision is both personal and professional: The more her discomfort with her body grows, the more she wants to break away from the fat community that has so warmly welcomed her. And on the professional side, she’s trying to avoid being pigeonholed at the Weekly Thorn as the writer who only covers women, bodies, and fatness. Though the article provides a lot of traffic for the paper, it also leads to the internet labeling Annie a racist. She receives virtual and physical hate mail and is even reprimanded by Fran for playing the victim. Annie spends the entire episode explaining the reasons behind her decision and lamenting her failure to think of the consequences. But that’s exactly the problem: As a white woman, she didn’t consider what it would mean for her to platform a community of racists.

To the show’s credit, everyone around her seems to be fully aware of it. And in the following episode, “Sorry,” she goes on an apology tour that ends with her running into Will again. His presence and her recent humbling allows her to finally admit her fears about being a fat couple. This is yet another example of the way that Annie’s actions are driven by her body and the fear that comes with being visible in both her work and personal life. She keeps trying to remove parts of her identity to become a more neutral presence, but the truth is that it’s impossible to live that way. Once she lets go, her romance with Will is easy; Britton brings so much warmth and charisma to the character. He’s playing a dork, but it’s the kind of dork you could see yourself spending your life with. He’s clumsy and self-deprecating, while also being one of the sweetest characters on the show. Amid all the cringe comedy, Will is a calming presence whose softness rubs off on Annie. Once their relationship is cemented, Shrill becomes a very different show, one about two couples—one established, one brand-new—trying to build their futures together.

It’s a classic sitcom setup, and by the end of the season it becomes clear that this shift in storytelling makes for a cohesive dynamic that the previous two seasons, which split their time between relationship dramas and workplace shenanigans, never quite achieved. Season 3 is proof that Shrill’s storylines about love and friendship are the heart of the show, with the workplace mostly serving as an extension of Annie. Given that it’s Shrill’s final season, this feels like a cruel twist: It was so close to getting its footing. Indeed, the series-ending episode (which I won’t spoil here) seems like the perfect setup for a dramatically rich fourth season that will never be. It’s not just that Annie and Will are a great romantic pair, but that their storyline offers a compelling opportunity for Annie to stop confronting her fatness and start embracing it. There are seeds of this in the penultimate episode, “Beach,” when it’s Annie’s turn to help Will become more comfortable with his body. It’s a shame we won’t get to see them grow together. That seems like it would be an engrossing season of television.

Read this Next: No One Can Escape Diet Culture—Even Lizzo 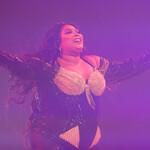 by Evette Dionne
Bodies detox themselves, and no amount of supplements, smoothies, or apple cider vinegar do more than our own bodies naturally do to regulate us.