Anonymous Instagrams Are Unionizing Staffs From Capitol Hill to Hollywood 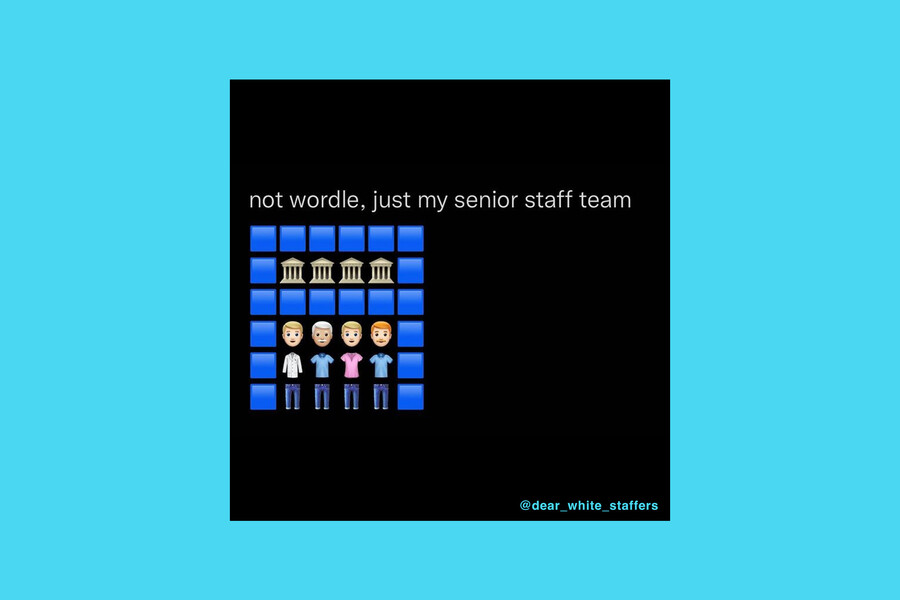 A quiet revolution began on Capitol Hill earlier this year when a handful of staffers began anonymously exposing uncomfortable truths about their prestigious workplaces: Unpaid Senate interns clocking 16-hour days. A white colleague who complained about working “like a slave.” Hill mental-health counselors ghosting clients seeking support. Staggeringly low salaries. Staffers of color fearing the Capitol reopening following January 6.
These are some of the stories appearing on @dear_white_staffers, an Instagram account run by an unnamed moderator. Beginning in early 2020 as a meme account, it transformed into a viral watercooler for Capitol Hill staff to exchange complaints in 2022. The account is full of anonymous submitters offering mental health and professional resources as well as confirming—and sometimes contradicting—previous testimonies. Dear White Staffers has gained viral momentum earning media coverage in the likes of the Washington Post and Politico, coinciding with the recent push for a Congressional Workers Union (talk of unionization dates back to at least 2020).
“Dear White Staffers exposed the unheard frustrations of Capitol Hill interns and staff. Because people shared their stories we were able to build solidarity and create momentum around unionizing and worker protections,” says G, the anonymous moderator of the Instagram @the_government_intern. “It definitely had a real-world impact!”
The popularity of anonymous accounts as tools for social organizing rose in the summer of 2020, with accounts formatted similarly to @dear_white_staffers. These accounts have been used to elevate Black students’ experiences at elite, overwhelmingly white private schools and to call out the exploitation of service workers across the country. The trend is continuing in 2022 as @dear_white_staffers inspired a new crop of anonymous accounts advocating for government workers’ rights, hoping to replicate its success in their states.

Anonymous accounts build on a tradition of personal storytelling as a radical act, a notable tactic in the consciousness-raising groups that were central to the rise of second-wave feminism. Jessa Lingel, associate professor at the Annenberg School for Communication at the University of Pennsylvania, noted to Bitch that the participants in consciousness-raising groups and anonymous Instagram accounts are linked by a rhetoric of powerlessness. Women in leftist organizations and beyond were discouraged from pointing out their own second-class status just as workers are now told to keep their heads down and out of unionizing.
“Union efforts ask workers to unlearn a message that they have been told their entire lives, which is, ‘We don’t need unions in the United States. Unions are bad.’” says Lingel, adding: “That entire message has only become so powerful in the last 50 years.”
Consciousness-raising groups were created to uncover political realities through personal experience. As the Chicago Women’s Liberation Union wrote in 1971, “We see that personal problems shared by so many others…are really political problems. Understanding them is the first step toward dealing with them collectively.”
Account moderators say they’ve seen a similar political awakening in their followers. With the ability to connect departments within a workplace and give voice to industry-specific issues, followers can see their experiences as part of a pattern of oppression rather than isolated incidents. A moderator for @dearnonprofits, an account inspired by @dear_white_staffers, discussed the issue with Bitch on the condition of anonymity: “I can’t even emphasize the amount of relief in knowing that your colleague is experiencing the things you’re experiencing…[Understanding] that you’re not the only one experiencing it is that first step of realizing, ‘This is a bigger problem than I thought it was.’”

“It’s less intimidating to write your story down than speak in front of others. [And] it’s great that people can just lurk on accounts and get informed.”

These platforms are effective tools that organizers use to pressure their companies and organizations to confront and address workplace inequality. Political awakening catalyzes off-screen action, and frees the accounts from accusations of mere “slacktivism.” Guggenheim Museum employees pushed to unionize in 2021, bolstered by posts describing mistreatment from @abetterguggenheim. Last fall, @ia_stories raised awareness about unsafe working conditions for film crews as the crew union IATSE entered contract negotiations.
“[What] has been important to us from the beginning of the page is that we didn’t just want people to be engaging with us,” @ia_stories cofounder Marisa Shipley tells Bitch. “We wanted people to be engaging with us and getting very active in their local unions to speak to the change that they wanted to see.”
With some boasting more than 50,000 followers, these accounts ride a fine line between public and private. Anyone can view the often intimate discussions featured on public accounts; but reaching an audience that may not be familiar with the issues means a broader audience can be leveraged in the fight for worker’s rights. A former Lush employee and moderator of @notsolushactually, who asked to remain anonymous, told Bitch via email that the cosmetics company “hates staff communicating with each other about things that are shit because then we can all see the trends and the discrepancies.” K. believes the best way to hold Lush accountable for unfair hiring practices and dismissiveness about aggressive customers during COVID is to draw attention to the disparity between Lush’s brand and its reality. “Truly, it is the only way things change at the company,” K. writes. “The notion of bad PR damaging the curation of what Lush is meant to be like (but isn’t actually) is terrifying for them.”
While participants in second-wave feminist consciousness-raising groups talked face-to-face, these accounts base their communities on anonymity, protecting submitters who fear employer retribution. Moderators take their duty of protecting submitters seriously: This includes not opening the account in public and deleting all screenshots of DMs after posting them. Several sources for this piece emphasized that speaking anonymously, even on a public account, was easier than speaking up in person, opening avenues to conversations that could not happen elsewhere. “People can share without fearing they’ll be boxed out of politics,” says G. “It’s less intimidating to write your story down than speak in front of others. [And] it’s great that people can just lurk on accounts and get informed.”
Even moderators have felt the fear of being exposed given a history of workplaces retaliating against anonymous accounts. Libel lawsuits have been filed against accounts that highlight anonymous sexual-harassment accusations. The defamation case brought by Indian artist Subodh Gupta against the anonymous account @herdsceneand was dropped in 2020. Another, involving account @dietmadisonave, an account exposing sexual harassment and misconduct in the advertising industry, was dismissed in 2020.
Anonymous worker accounts have already felt the pinch. Latino Rebels recently reported that bosses on Capitol Hill were actively discouraging staff from associating with @dear_white_staffers. In a collective statement, @abetterguggenheim informed Bitch about aggressive tactics that have been used to try and uncover their identities: “When we first began to publicize our organizing, we immediately became aware of directed efforts to bypass our anonymity through intimidation and harassment,” the group explained. “Our communications with peers at other museums have confirmed that we are not alone in this experience.”
Unlike the early non-hierarchical and leaderless consciousness-raising groups, account moderators hold a great deal of power. Not only do they act as safeguards for posters’ identities, but they are responsible for choosing featured submissions. Several moderators noted that they do not independently corroborate stories and indicated that they post most, if not all, messages they receive. Z. says that they occasionally add context to a post if they feel it’s necessary, and turn to their audience for feedback. @ia_stories posts DMs on the criteria that they reflect systemic failures, not personal grievances. This amount of control can be cause for concern, and despite accounts’ pledges to address racism in their industries, implicit bias can still slip through.
In February, @changethemuseum, which aims to amplify “tales of unchecked racism” in United States museums, faced backlash after posting a DM from a non-indigenous person complaining about museums hiring curators who falsely claim to be Native American. Critical comments on the post focused on the ethics of non-indigenous people determining authentic indigeneity and the post’s allusions to individuals in the art world. @changethemuseum later archived the post and apologized for perpetuating “violence, misogyny, gatekeeping, and othering.” The pressure to facilitate posts—not to mention the mental toll of reviewing thousands of posts from workers—can be overwhelming. The moderators of @abetterguggenheim decided to take a step back in 2022, and @ia_stories has been on an extended break. Shipley notes that running the account became especially challenging after the on-set death of cinematographer Halyna Hutchins last October. “It felt like there was [an] expectation to tell every story and address every problem. That’s just not realistic for a space being run by volunteers who are also full-time working crew members,” Shipley explains.

But these accounts aren’t going anywhere, says Lingel. According to Gallup, labor unions’ popularity has increased seven points since 2017. In October 2021, Time reported that the COVID pandemic has highlighted the stark contrast between soaring corporate profits and stagnant low wages and galvanized workers to organize. In these new labor movements, technology is at the forefront: As tech writer Nicolás Rivero, explained in a December 2020 Quartz article, everything from encrypted apps to shareable Google sheets to digital petitions “[help] people to find far-flung peers, share grievances, and coordinate action.”
The spirit of consciousness-raising through social media will only grow and transform from here. “I don’t think you can really point to a successful activist movement, at least not among young people in the United States, that isn’t linked to technology,” Lingel says. “You’re going to see them use the tools that they’re already using in their everyday lives to generate visibility.”
A common refrain among moderators is the strength they’ve seen in bringing people together in community. For Shipley, the camaraderie born from storytelling has been a light in the dark. “I think it has been very important to [show] the personal impact of systemic issues because it humanizes the people behind the screen,” she says. “Being able to fill some of that space has been powerful.” 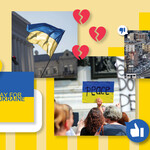 by Stacia Datskovska
I'm unfollowing anyone who's posted statements like, “I express solidarity with my Ukrainian brothers by switching from Moscow Mules to Mezcal Mules.” 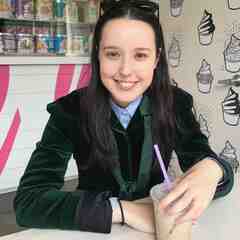 Sophie Hayssen is a freelance journalist based in New York. Her work covers activism, internet culture and politics with bylines in Teen Vogue, Refinery29, and the Women’s Media Center. You can read more about her work on her website or sign up for her newsletter.