“Antebellum” Mishandles Its Message about Slavery and Liberation | Bitch Media 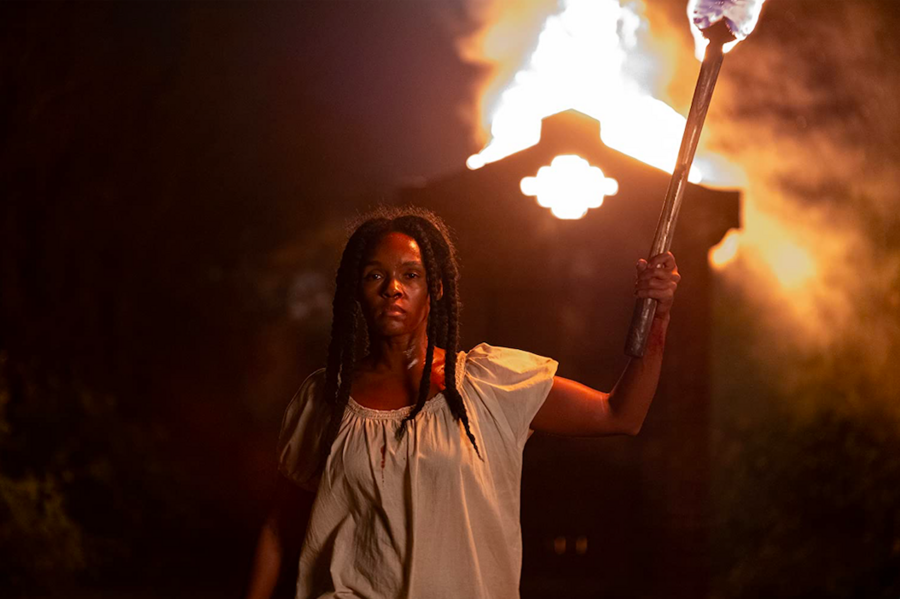 The trailer for Antebellum, starring Janelle Monáe, promises a film that never comes to fruition: a psychological study of the depravity of slavery recontextualized through the cultural consciousness of a modern-day Black woman. The short clip evokes the unsettling atmosphere of a Black Mirror episode and the horror sensibilities of Jordan Peele, but the nearly two-hour film rarely explores the inner life of its heroine. Its narrative centers on a surface-level thesis that is based on the degradation and exploitation of Black women’s bodies. A film about slavery can’t tell the truth about the legacy of white supremacy without including the bloody consequences of state-sanctioned oppression. But when watching movies in this genre, one has to ask: Who is this movie for? Antebellum’s portrayal of slavery is neither revolutionary nor unique. The film is less of a psychological thriller and more of a dystopian fantasy about a version of white supremacy that has a single unchanging face.

The movie ominously opens with a quote from William Faulkner’s 1951 novel, Requiem for a Nun: “The past is never dead. It’s not even past.” The quote seems to function as an anchor for a central narrative theme, which is exemplified through Veronica’s (Janelle Monáe) harrowing journey. Before we meet Veronica, we’re transported to a sprawling Southern plantation, flanked by Confederate soldiers, that echoes Scarlett O’Hara’s beloved Tara. Within the first 30 minutes, we witness Black women being brutalized: When an unnamed Black woman attempts to escape, she’s not only shot and killed, but she’s also lassoed around the neck and dragged from the back of a horse. The gold septum ring in her nose gives pause, but there are no other visual clues that indicate something is amiss. Later, Monáe’s character, who is called “Eden,” is beaten and branded for being disobedient. In a 2019 essay for Vulture, Lauren Michele Jackson, an assistant professor of English at Northwestern University, explored how most mainstream movies about slavery linger on corporal punishment, placing an emphasis on the desecration of the Black body through pained shots of scarred backs and fresh wounds bloomed from the lashing of a whip.

“Anyone who needs a well-choreographed whipping to be convinced slavery is worth consideration is already at a deficit far too grave to be remedied in a smidge over two hours,” Jackson wrote. “This perspective, however, is far from unanimous in recent cinematic history.” Antebellum doesn’t seem to share Jackson’s belief, as it uses Black women as sacrificial props to reinforce the immorality of slavery and elicit viewer empathy. In another harrowing sequence of events, Julia (Kiersey Clemons), a pregnant Black woman, is viciously attacked by a young white soldier named Daniel (Robert Aramayo) hours after she and Eden are forced to serve Confederate troops at an outdoor dinner, which causes her to miscarry as she works in the fields. Soon after this incident, Julia dies by suicide. The tragedy of her story mirrors the unconscionable horrors of human bondage and the culmination of white male rage, but who is she beyond her suffering?

With the exception of Eden, all of the Black characters trapped on the plantation have been robbed of their agency. They have been forbidden to speak to one another and thus, most of them remain silent, because they’ve seemingly accepted their hellish fate. A Black man named Eli, who is simply referred to as the “Professor” (Tongayi Chirisa), conspires with Eden to plot an escape, but he lacks an interior life and functions as a tool to propel her salvation. Midway through the film, we learn that Eden and Veronica—a successful Black author with a PhD in sociology, a doting mother to a young daughter, and a loving wife—are the same woman. She’s a skilled equestrian and a devout practitioner of hot yoga who gives polished speeches peppered with social-justice buzzwords that make right-wing pundits foam at the mouth. And after a night out with her friends, she is kidnapped and brought to the plantation. Veronica is the Hollywood manifestation of Black excellence, the idealization of Black feminine strength, and proof that someday “women can have it all.”

Her refusal to function as a token in her personal and professional life makes her a high-priority target for an underground network of white Southern nationalists who want to punish her for being unapologetically Black, successful, and visible. In many respects, Veronica exposes a flaw in respectability politics: White supremacists are threatened by Black people regardless of their level of education, tax bracket, or professional accolades. But what does her story lose when the film’s big twist is revealed? Antebellum was initially dressed in the trappings of a time-travel story, evoking comparisons to Octavia Butler’s seminal 1979 novel, Kindred. Although Kindred is a deft examination of the physical and psychological impact of slavery, it doesn’t sensationalize history or fetishize violence. In a 2004 interview with SFGate, Butler said, “The reason for my writing this novel really was to try to make people feel the past as well as understand the facts of it to understand it [the slavery experience] in your skin, in your mind, in your emotions, to feel it.”

Kindred succeeds because the narrative might make us uncomfortable, but it doesn’t reduce its characters to caricatures. While Antebellum incorporates some of the same themes, it positions the past as a bygone era that racists want to return to rather than an inheritance that influences and manipulates the present. Similarly, Veronica being a target for the wrath of vengeful bigots is the exaggerated cinematic treatment of a reaction shared by white supremacists. Racist white people in positions of power (and racists overall) generally don’t like people of color who speak out. This is evident from the way those who practice civil disobedience, including Martin Luther King Jr., Colin Kaepernick, and the Black Panthers have been treated. History shows us why we shouldn’t be so shocked that the FBI labeled Black Lives Matter a domestic terrorist organization in 2017. However, Veronica is more of a placeholder for these histories rather than a fully realized character. While it’s difficult to tell how long Veronica has been a prisoner at the plantation, she seems to have risen to the ranks of a leader, a savior molded out of the blueprint of Harriet Tubman. She’s there to amplify the sociopathic proclivities of her captors, turning their hatred into cartoonish villainy.

In an interview with IndieWire, Christopher Renz, the film’s cowriter and codirector, said, “This movie really is a visual representation of what ‘Make America Great Again’ would look like.” However, white supremacy is a shape-shifter that doesn’t commit to a static form. This is key to its pervasiveness and its survival. In fact, the evolution of white supremacy, from slave codes and Jim Crow to stop-and-frisk, shows that it’s an ideology willing and able to adapt. In her 2019 book, Thick: And Other Essays, Tressie McMillan Cottom defines this heightened awareness as understanding “the psychology of white people and the elasticity of whiteness.” Blackness, she reasons, is not a direct response to whiteness, but whiteness is a defense mechanism: “Whiteness, the idea, the identity tethered to no nation or origin, no place, no gods, exists only if it can expand enough to defend its position over every group that challenges the throne… For that situational dominance to reproduce itself, there must be a steady pole. That pole is blackness.”

Antebellum is fixated on racism as an act of overt violence, but racism is so monstrous because it can appear so deceptively normal. “Our traumas are handed down through the generations and intensify with each new death and realization that American systems were never designed to work in our favor,” Marissa Evans wrote in a recent piece for the Atlantic. “We know, too, what the inequities mean for our future. Our pain comes not just from those we’ve already lost, but from those we stand to lose over time.” Perhaps it’s my disillusion born from lived experience or the result of my onset adolescent depression, but I know that racism isn’t limited to white Southerners fantasizing about taking Civil War cosplay to an unhinged extreme. The movie’s third act comes up short as an exercise in cathartic justice because it wants us to feel as though we’ve vanquished the monster. There’s a particularly labored, slow-motion scene where Veronica gallops on horseback through a battle reenactment. Guns and cannons boom all around her like a scene in Glory. Her successful escape prompts the FBI to investigate the plantation and identify other missing Black men and women.

Instead of leaving viewers with a revelatory observation about the nature of whiteness and the future of its permanent demise, the film feels more like a reminder of the weight of our exhaustion; a reminder that resilience can sometimes be a Black woman’s undoing.

In real life, we know that the ideology of white supremacy is a stubborn adversary, able to multiply and thrive across oceans, across nations, across time. If only eradicating anti-Blackness was as simple as burning down the master’s house, as though fire could deliver a cleansing baptism. We live in a world where a Black woman can be fatally shot by the police in her own apartment, those responsible for her death are only punished with a light slap on the wrist, and her death becomes a social spectacle. Like the issues involving antiracism reading lists and book clubs, watching Antebellum demands a certain amount of labor that’s not necessarily benefiting those who need to undertake the burden. Isolated elements of Antebellum make the film seem like a clever metamorphosis of the traditional slave narrative, but it’s less about Black people surviving white supremacy and more about offering a self-conscious and heavy-handed call to action for people who need to be enlightened. Certainly, there’s value in reading literature and studying art that makes us uncomfortable.

Growth is often painful. And certainly, Black people aren’t a monolith. Some may find the film to be a lightning bolt of truth, a barbed yet necessary reminder of not only the past but what’s currently at stake in this time of social and political uprise. The United States repeats its traumas because it suffers from collective amnesia. However, Antebellum doesn’t develop any one character enough to explore nuances. Instead of leaving viewers with a revelatory observation about the nature of whiteness and the future of its permanent demise, the film feels more like a reminder of the weight of our exhaustion; a reminder that resilience can sometimes be a Black woman’s undoing. I badly want to hold on to a semblance of hope, to invest in the promise of a hard-won tomorrow, but it feels like we’re running on burnout fumes. I have downsized to small victories, such as remembering to take the right pill at the same time or remembering to eat. I am no one’s wounded Lady Liberty.

Read this Next: Begone with the Wind 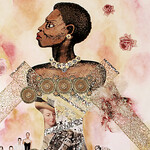 by Ayanna Dozier
If these cinematic perceptions of slavery are committed to memory, then we might accept the plantation as a mere backdrop to terror rather than the very site of it.